The Filibuster That Showed Why The Cons Are Unfit To Govern 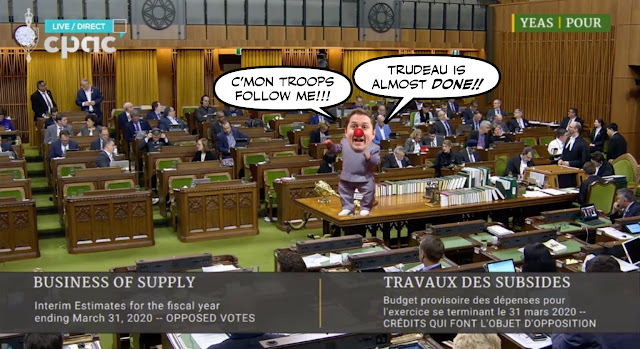 After a voting marathon that ran non-stop for more than 30 hours the Con filibuster ended early this morning.

It failed to achieve its objective of forcing the Liberals to allow Jody Wilson-Rabould to speak "her truth" again, which was absurd to begin with since experts have testified she can say what she wants in the House of Commons anytime she wants.

But it did cost taxpayers at least $1.5 million dollars, it did get some really bad reviews.

And it did make Andrew Scheer look like a liar. Again.


For although he tried to make it sound like he was leading his weary troops to victory,  after only 12 hours he was already pulling a disappearing act. 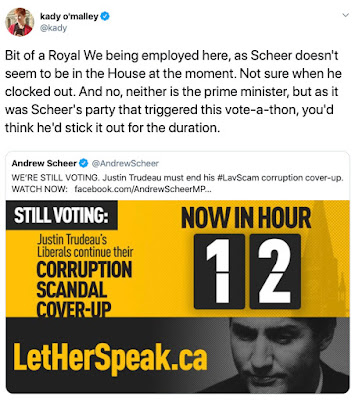 So I've been voting for 21 hours now. The leader here the least is Scheer. Last vote was 95-44, so less than half of MPs are here. I support getting answers on #SNCLavalin but this will not work. #GPC #cdnpoli
— Elizabeth May (@ElizabethMay) March 21, 2019

And even the Con-friendly John Ivison was not impressed.

And then there were all those programs that the Cons voted to defund.

As MPs, we're sent to Ottawa to fight for our communities and part of that is casting votes on your behalf.

All night long and into today, Conservative MPs have chosen to vote against funding many important services their constituents rely on. #cdnpoli #ConservativesVoteAgainst pic.twitter.com/wcqPtSTgCz
— Andy Fillmore, MP (@AndyFillmoreHFX) March 21, 2019


Including this gift to their darling Jody Wilson-Raybould...

Which when you put it all together, can only be described as a roll of shame, and will be used against those fascists all the way to the next election.

The scary part is that the Cons, with the help of the NDP, almost managed to bring down the government.

But in the end won only a small, very very small victory.

When the hideous Con Scott Reid reported Justin Trudeau to the Speaker for eating a bagel chocolate bar.

Who among us hasn't had to sneak a chocolate bar on occasion? #pnpcbc @JustinTrudeau pic.twitter.com/5kJv2N8j3R
— Power & Politics (@PnPCBC) March 20, 2019


As only a Con could.

But I suspect that Trudeau will have the last laugh, for the whole ugly episode debased our parliament, and gave Canadians an idea of what the Cons might do to our country, if they should manage to win the next election. 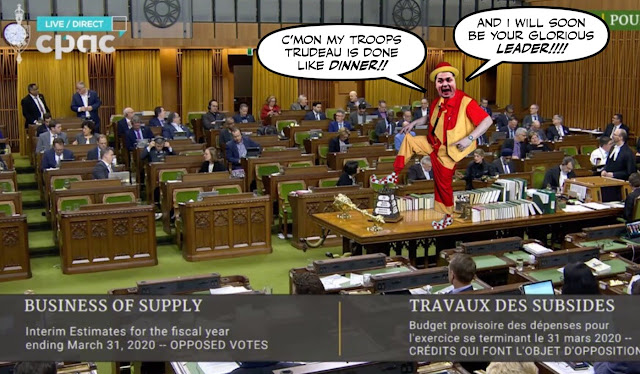 And it was such an ugly spectacle, decent people are starting to speak out, even some in the media.

The Cons overplayed their hand, as they have so many times before.

But this time, with the spectre of right-wing extremism hanging over them, they will not be forgiven.

They have showed us who they really are, and for that they must and will be defeated if our Canada is to survive...

Stephen Harper must be facepalming at this level of ineptitude from his protege. My only explanation is that they were clinging to the SNC nonsense so hard that they forgot that their voting records as legislators can be used against them in advertisements.

I haven't seen an own goal that bad since Game 5 of the 2007 Stanley Cup Finals.


To say nothing of ticking off the media that they rely on for their own propaganda.

Good for Elizabeth May for staying to vote for as long as she did.

Watched some of it last evening, B.C. time. omg, what a waste of time and money. Why the Conservatives did this is beyond me. It was dumb. That is not how you make a point. This will not force any one to do anything except perhaps fall asleep. Saw our Minister of Defense, Harjt Sajjan and Minister of External affairs, Chrystia Freeland along with the others in the Liberal caucus. Far fewer Conservatives where there holding down the fort by that time.

In the up coming election all other parties will have to do is make signs showing the Conservative M.P.s standing up to vote no on any number of important issues, like you know the RCMP. that will warm the hearts of a lot of criminals, but not the voters of cities and towns which have the RCMP as their main law enforcement agency, like most of B.C. Voting No against military spending, whatever was on their minds when they did that?

Looks like he's already at IDGAF levels and that's good to see. When you're hungry, have a Snickers! Justin is going to have a helluva book to write and a helluva time doing so, if he snuffs out from all this. Chrétien did. Guess where Harper's book went: the bargain basement. Chrétien's sold out in hours. Even if Justin does get tossed because of how stupid the electorate has already proven to be (see entries under "Doug Ford" and "Jason Kenney"), he'll have the last laugh no matter what. I foresee a Netflix docuseries already: call it Making a Minister or better yet, Bullshit Theater, and a very Canadian contemporary stage adaptation of Julius Caesar on the same playbill as 1979 and Come from Away. At the very least, he'll move onto something in the private sector and no doubt bring loyal Liberal MPs along with him outside of the insane asylum in Ottawa.

I want you to read a snail mail letter I sent him last month that I shared with some colleagues on another forum. He definitely should cut out to Cali, let Jody have the Andy Kaufman mixed-gender boxing match with Weak Andy that she wants so bad, and LOL at the bullshit theater from the sunny sidelines of San Diego as they both huff and puff and burn each other's big house down. In the words of the late, great Alan Rickman, he'll be sitting on the beach earning twenty percent.

We truly do not know what JWR wants, so lets not attribute something to her, we don't know about. We don't need anyone to "burn each other's big house down". We have learnt in Canada, when one house burns, sometimes another 2 to 4 go along with the original fire.

Trudeau is much tougher than people think he is and he will continue. If he were to leave not only would it play well for the conservatives, but the Americans, Saudi's, Russians, and Chinese. That won't play well for Canadians. It may some of this carry on is being "encouraged' by outside players, who are the only ones who will benefit from any of this. As the media calms down, so out the rest. there will be people who would be only to pleased to see infighting within the federal Liberals. that won't work well with the upcoming election. Jackie Blue, your writing is excellent, you're funny, but also in my opinion, divisive. You're entitled to your opinion of course, however, to attack other Liberals does nothing to encourage party unity. that will be required along with a lot of money for the upcoming election.

Things like this have happened before. I've watched Canadian politics for over 55 years. I've seen what infighting can do. It never helps.