Doug Ford and the Harper Gang

Well Doug Ford has his bus, he's on the road, and he's now channelling Donald Trump, as only an ape could.

And vowing to go after Kathleen Wynne as Trump went after Hillary Clinton.

So don't be surprised if the mob he calls the "Ford Nation" starts chanting "lock her up, lock her up," at one of his bestial rallies.

But did you know that the ones who are giving him his Team Trump marching orders, are in many cases the former members of a another well known team. 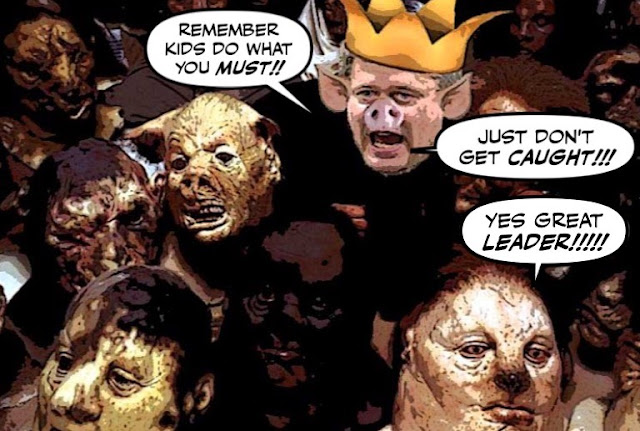 The political operatives who ran Stephen Harper's monstrous Con machine. The PMO fanatics, the boys and the girls in the short pants, the ones who serviced him so faithfully.

Now reunited and working to try to mould a "Great Leader" out of a political ape. 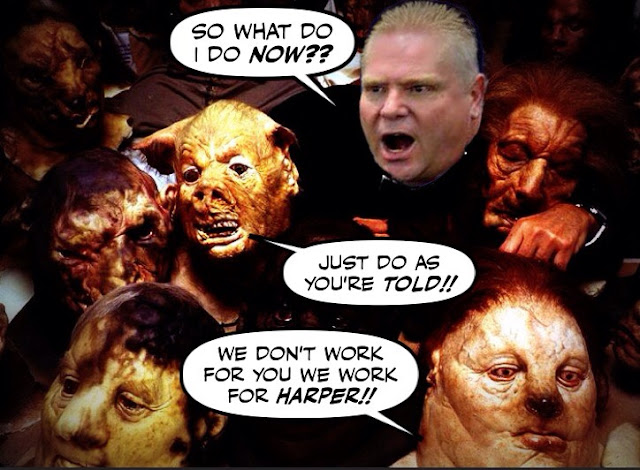 Or in the case of Kory Teneycke, the former Harper mouthpiece now managing Ford's campaign, just trying to keep the fish from stinking. 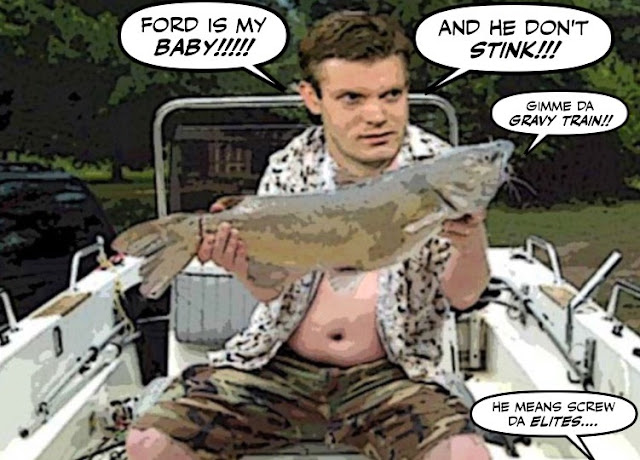 The fanatic who when he was asked by Tom Clark why the Cons were using ISIS videos to smear their opponents memorably replied:

"We're better than the news...we're TRUTHFUL."

And then there's Jenni Byrne...

The former Con pitbull, who is so ferocious she was said to scare her own staff as much as she scared her opponents.

She's also working for Ford, along with people ike Michael Diamond who most recently worked for Kelly Leitch, Fred DeLorey who managed Erin O'Toole's campaign, Chris Frogatt who once worked for John Baird, Ian Todd who worked as chief of staff for two cabinet ministers during the Harper years, and several others.

Which is so ironic, for as you may remember, in the dying days of the last election campaign, when they were all terrified they were going to lose their jobs.

And as Bob Fife reported, Stephen Harper was having nightmares...

Those nightmares, and his total desperation, led him to invite Rob Ford to one of his rallies... 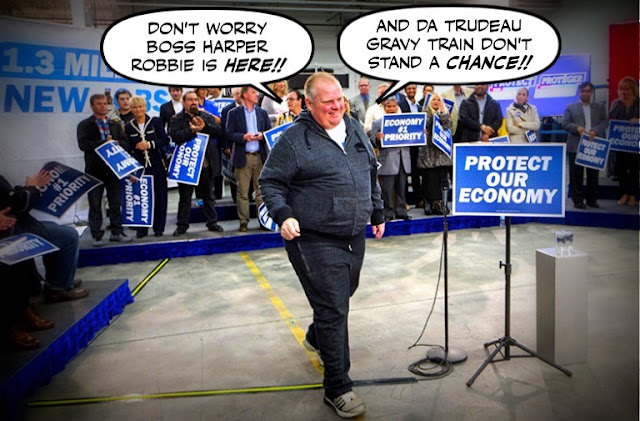 And that was the fatal decision which many believe finally finished off the Con regime.

And now his faithful servants are back serving the brutish brother of the man who helped give them the boot. Isn't that pathetic?

But of course the bad news is that they are a team.

They have worked together before. They are good at restricting media access, and they are good at covering up the influence of religious fanatics, like Tanya Granic Allen.

Who made Ford's victory possible, and now wants payback.

And who despite her ghastly views was praised by Stephen Harper.

But then why wouldn't he?

For when you look at the big picture, isn't something immediately obvious? 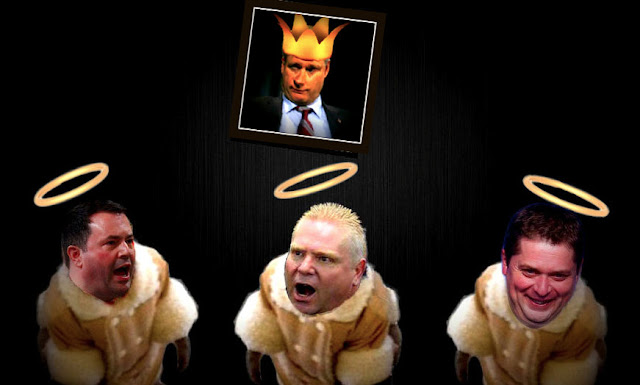 Harper's loyal servants, with the help of the religious right, are still working to change Canada beyond recognition.

And in a sense bring Harper back to power... 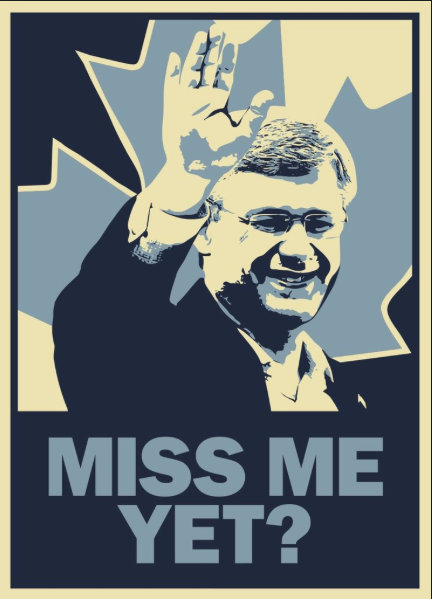 Is Harper planning some kind of political comeback?

Who knows, but I wouldn't take any chances. 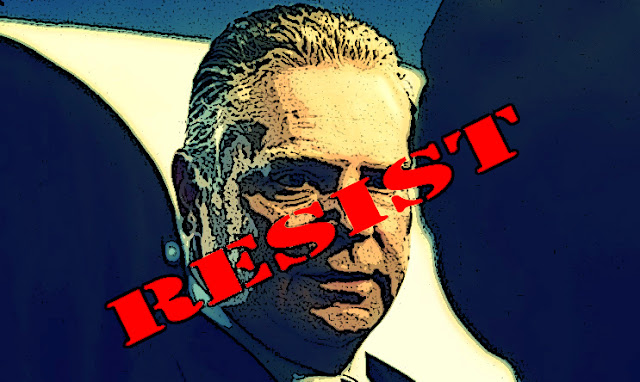 I wondered whether the boys (and girls) in short pants had gone, and it is pretty frightening to think about them coming back to organize Doug Ford's campaign. The Liberals and the NDP are going to have to kick up their game a notch or they'll be in trouble.

You would think those Cons would have had the decency to retire from politics after the shameful years they spent propping up a would be dictator. But no, now they're trying to elect a man who is totally unfit to run a province the size of Ontario. They really have no shame.

Harper was bad enough, Ford will help destroy this country. The Cons who are enabling him should be arrested. They must surely know he is unfit to serve, but they just don't care. I despair for the future of our country.

Stellar performance in adventures such as Fox news north and the go between in Ezra's ransom payment makes Kory highly qualified to manage Dougies campaign. Why does Ontario have all the luck when there are so many other places that would benefit from their expertise. Then again perhaps they should be kept undercover on the chance that these were the weapons of mass destruction Bush was looking for when he gave the orders to invade Iraq.
RT

Simon are you suggesting that Stephen Harper is planning a comeback? I thought we had seen the last of him and the idea that he could return is too awful to contemplate.

Hi anon@8:49...yes, it is pretty disturbing, for as I mentioned in my post they may be horrible Con operatives but they do know what they're doing. And judging from what I've seen recently the Liberal and NDP campaigns are looking rather lame. They still have time, but the sooner they start attacking the Cons the better...

hi anon@9:19 PM...yes, they are shameless. They don't care who the candidate is as long as he or she serves the interests of their corporate masters. In fact, since they want the candidate to follow their script, the dumber the better...

hi anon@10:34 PM...don't despair, it will do you no good and only make things worse. Just use your righteous anger to motivate you to fight the Cons as harder than ever. It may seem pretty bleak right now, and this "Spring" isn't helping. But history is on our side, and in the end we will defeat them...

hi RT...I was going to mention some of Kory's misadventures while working for Fox News North, but there were so many I didn't know where to start. His career has been one spectacular failure after the other, and let's hope his latest venture also goes down in flames. Unfortunately however, he does have an experienced team working for him and Ford, and the ape could very well end up winning the election. We are going to have to be very smart and very ruthless if we are going to beat them...

hi anon @12:08...I wouldn't go that far, but I wouldn't rule it out either. After two years he's back in the political arena as chairman of the reactionary International Democrat Union, and he's got a number of his kind of candidates running for office. I never thought he could stay away from politics for long, but I guess we are going to wait and see...

Simon, could Kory and his little Jennay be considered the Con version of a taint team? You know, they operate in the dark in the vilest of places yet remain in close proximity to the butthole?
Seriously though, if I wanted to see "The Return of the Living Dead", I would have rented it. These 2 clowns played a huge role in helping Harper disembowel himself in 2015. Canadians finally got sick and tired of the constant negativity, the race baiting and the scandals. Add to that their disastrous debacle of a campaign and the deal was sealed.
Having Rob as a trump card(so to speak) which turned out to be a joker was foolhardy and desperate as was their ridiculous ad with Harper and the cash register. Remember that one? KA-CHING!
This may ultimately work in our favour by limiting the "Ford Aberration" to a minority government. It would surely drive Doug nuts as he'd be handcuffed in steamrolling over this province and Ontarians would get a very good look at "The Real Doug Ford".
JD

What's the name of the song at the end of that Bob Fife video?

hi JD...Teneycke and Byrne are a formidable tag team, and in a short election campaign could do a lot of damage to the Liberals and the NDP. Whether they can make Ford look good is debatable, unless they can install a hearing device in his ear so somebody can read him the answers to questions. But of course the biggest problem is the threat of a vote split, with Wynne and Horwath almost tied in the polls. Strategic voting is going to be more important than ever. If we can manage that successfully a minority government could be possible. If we can't Ontario going to look like the Province of the Apes for four long years...

Hi anon@7:44...I'm afraid I don't know. It's very familiar and very nice, and I'd love to use it in a video on the end of Scheer, along with religious chanting etc etc. So if anybody know please let me know...

Hi Kathleen...I wish all those Harperites could be busted for trying to make Boss Ford look like a leader. But I haven't the slightest doubt that the ape will screw up big time, and those Cons will be held accountable...

I don't know the name but it is from the soundtrack of the movie Platoon.
JD

Adagio for Strings. Thanks JD I looked it up.

You're welcome Anon. It is a hauntingly beautiful piece and appropriate in that Harper was haunting though it sure was beautiful when he got the boot.
JD