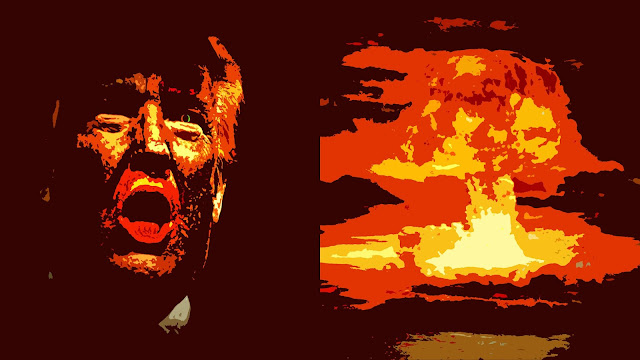 It's a truly terrifying moment in human history. Donald Trump is vowing a massive missile strike on Syria.

And taunting the Russians.

While we wait to see whether Israel and Iran will declare war on each other and trigger an all out war in the Middle East. Or even the Third World War.

And to make matters worse, if that's possible, Trump has never sounded so crazy. 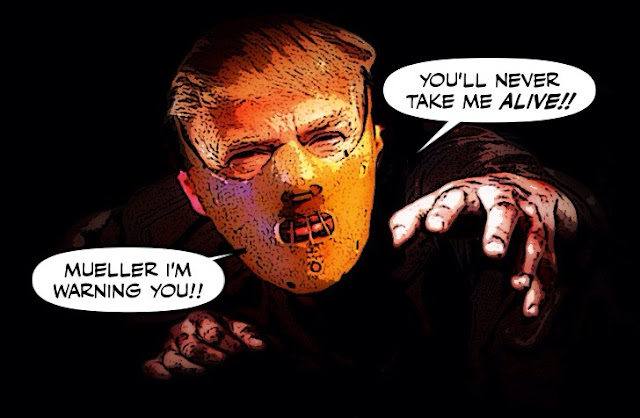 “An attack on our country.”

That’s a blunt, unqualified phrase that you associate with planes dropping bombs or tearing into skyscrapers. It’s also an apt description of Russian interference in the 2016 election: something that President Trump has steadfastly refused to accord the proper language or outrage.

But a lawful raid on his attorney’s office and hotel room is what prompted the president to use those immensely weighted words. They’re a signal — make that a siren — of how cornered he feels, how monstrously large his belief in his own persecution has grown and what a perilous situation America is in.

And now that the equally deranged war monger John Bolton is his national security adviser. 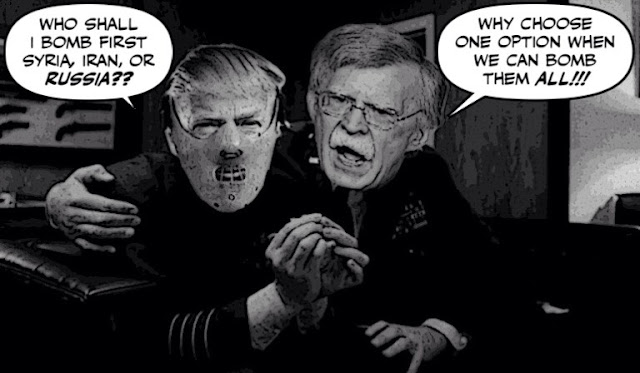 There is nobody left to restrain him.

The ranks of people who either gave Trump a sense of comfort and stability or sought to steer him away from his most destructive impulses have thinned. He’s more alone than ever. He must be more frightened, too.

But not half as scared as the rest of us should be.

Or heed the Russian warnings.

This week, aides to President Vladimir Putin circled the wagons, deeming Trump's new wave of sanctions and promise of action in Syria as the latest signs that Russia faces a new era of “geopolitical solitude” and antagonism from the West. Officials warned of a new “Cuban missile crisis” in the Levant — and the prospect of a much more dangerous conflagration.

“Trump has to understand that we’re going to be talking about the possibility of nuclear escalation if we have a collision of the U.S. and Russian militaries,” Igor Korotchenko, a Russian military scholar and member of the Defense Ministry's public-advisory council, said to my colleague Anton Troianovski. “Everything can happen very quickly, and the situation can spin out of the control of the politicians.”

And this is the place where Trump and all the morons who voted for him have brought us...

To the very gates of Hell. 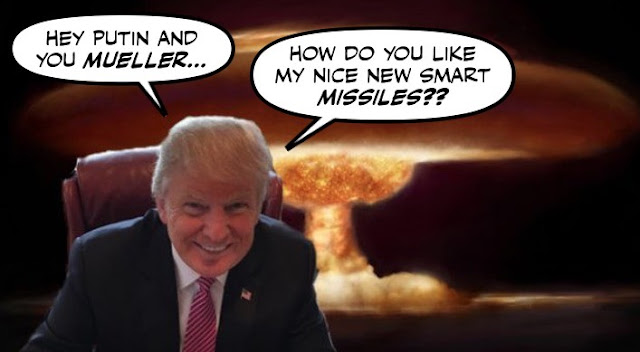 Bring him down, by whatever means necessary.

I anticipate bombing will start on Sunday, shortly before 2200 hrs EDT:

ABC: Comey compares Trump to mob boss
A source present at the taping says James Comey's interview with ABC's George Stephanopoulos, airing Sunday at 10 p.m. as a "20/20" special, is "going to shock the president and his team."

That tweet by Trump is his most disturbing tweet ever, and the definitive proof that he is unfit to be the president of a nuclear power. Taunting the Russians like that is the act of a madman. He is playing into the hands of the Israelis who would love a war with Iran. Only a miracle can save us now.

Calm down. Trump is giving Russia and Syria plenty of time to move anything of value to safety. When he gets the thumbs up from Vlad, he'll launch a load of missiles that cause big bangs, fire and smoke for the viewers at home.

Once Donnie Smallgloves is done strutting and bragging, the Russians and Syrians will be operating as usual within a week. Just like the last time, when Trump was trying to impress Xi with beautiful chocolate cake and fireworks.

The gas attacks are questionable.

whats crazy is that its never been proven there was a gas attack. The White Hats seem to be good at making movies.

Why would Assad on the verge of final victory use gas. Interesting that two days after Trump says he is leaving Syria someone slams the door in his face.

The first encounter was nothing more than expensive theatrics hopefully this time it will be no different and the red line hero can declare victory and bring the troops home.
RT

Hi anon@6:23 PM...in a normal world we could both chuckle at that, but in Trump's crazy world anything is possible. And I can't help feeling that when Mueller makes his move Trump will do anything to distract us. We are truly in the hands of a madman...

HI anon@7:59 PM...I agree with you as far as that tweet is concerned. It turns out that he was reacting that violently to a report where a poor translation made the Russian statement sound more threatening that it was. And I also agree that there is a huge danger that hardliners in Israel will take advantage of the situation to declare war on Iran. However, I don't believe in miracles, so I would say only Mueller and mass resistance can save us now...

Hi anon@8:21 PM...who knows you may be right. But there are still huge risks. I read that the Syrians were moving their jets tonRussian bases, but what happens if the Americans still try to take them out, and end up killing a large group of Russians. Just like Trump Putin is very sensitive about losing face, so how he would react to Russian casualties is not predictable, and as that Russian military scholar warned, the situation could quickly escalate out of the control of politicians...

Hi UU...from what I saw on TV the gas attack looked only too real, but the question of who was responsible needs to be properly investigated, Which is yet another reason Trump's rush to bomb strikes me as dangerous. There are too many agendas at play in that country, and the stakes are too high for any mistakes to be made...

Hi Steve...you ask some good questions that I can't answer. The whole situation strikes me as madness...

Hi RT...I'd like to believe that this latest attack will just be more theatrics, but with the British and the French also threatening to get involved, and the Israelis and the Iranians threatening to go at each other, I can't help feeling that the situation could escalate out of control....

I think it's all bluster to distract from Mueller who is tantalizingly close to exposing the thoroughly corrupt dealings of anything Trump has and continues to be involved in. While Trump seethes with rage over Mueller's "attack on the country", his days are consumed with how he can stop the investigation without being impeached.
I agree with anon 8:21 that Trump has given his buddy Pooty a big heads up by telegraphing their military plans/options to the world. I mean what next? Tweeting out the bombing coordinates 'cause you know, good people on both sides.
Of course, if the Russian version of "On Golden Pond", starring Trump and a cast of bladder bloated Russian hookers were to appear in the coming days then I'd say their BFF status is null and void, much like this sham presidency will be.
JD

I'd be surprised if the U.S.A. does much of anything after Trump sent his warning to Russia. Last time they surprised them, sort of. Israel has already sent over a few bombs, I expect some one else will do the work or some one will tell Assad to knock it off.

If the U.S.A. was going to do anything Trump would not have sent his warning. His crossed arms at today's press conference, tells me, the is very very threatened and confused.

As to Mueller and the investigation, my bet is not the political stuff will bring down Trump but the sexual scandals and not because anybody is all that bothered by them in the Republican party, but rather he paid the women off and that may be a crime under New York state law. It would be rather funny if that was his end.

No more wars for Israel.

Trudeau backs Trump's attack on capitol of Syria. No surprise to me... https://www.thestar.com/news/canada/2017/04/07/canada-not-part-of-us-strike-on-syria-but-backs-efforts-to-stop-atrocities.html