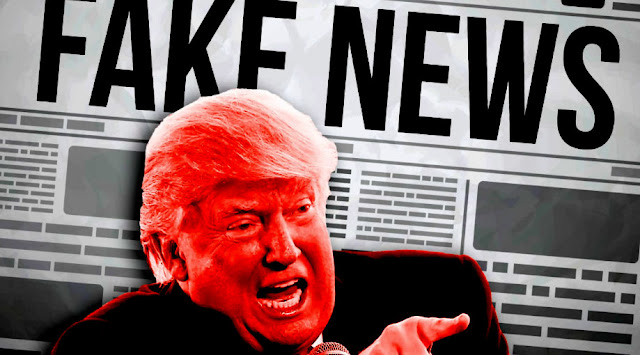 As we all know Donald Trump likes to rant and rave about the so-called "fake news," even though he produces ninety per cent of it himself.

And it seems the right-wing Sinclair Broadcast Group, that owns more TV stations in the U.S. than any other company, shares that view.

And ordered its news programs to deliver the same speech to its millions of viewers.

And although the sight and the sound of all those Con parrots set off a fire storm of criticism, guess who was delighted?

Yes, the ass clown himself.

While a spokesman for Sinclair Broadcasting denied the company had done anything wrong, and claimed it was actually motivated by the highest principles of journalism.

Scott Livingston, Sinclair’s senior VP of news, reiterated that the message is meant to reinforce the traditional objectivity of local TV news.

“We aren’t sure of the motivation for the criticism, but find it curious that we would be attacked for asking our news people to remind their audiences that unsubstantiated stories exist on social media, which result in an ill-informed public with potentially dangerous consequences,” Livingston said in a statement provided by Sinclair.

But then of course, the company would say that.

For its executive chairman David Deniston Smith, may not know much about journalism, but he does know a lot about prostitution.

The former president and current executive chairman of Sinclair Broadcast Group was previously arrested for an “unnatural and perverted sex act” with a sex worker.

And all about ordering his employees to do his dirty work. 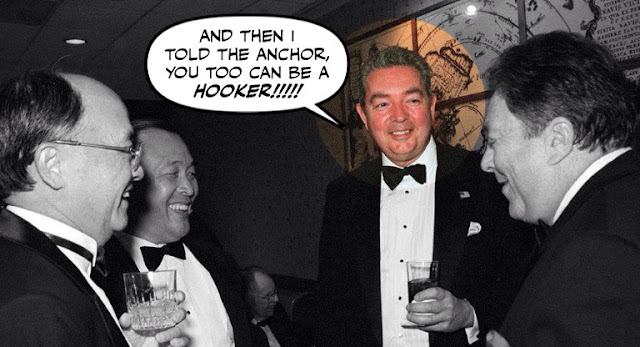 According to a 2004 expose on Sinclair Broadcast Group published by Salon, part of Smith’s plea deal included a promise that Smith would own up to his behavior on air. Smith ultimately had the confession written up–and then he ordered an anchor to read it on air.

LuAnne Canipe, a reporter who worked at Sinclair’s flagship network in Baltimore from 1994 to 1998 said, “I asked the anchor why she was reading it, and she said she didn’t feel like she had any choice.”

Which brings me back to the Con media in this country, who also sing from the same song book when it comes to Justin Trudeau... 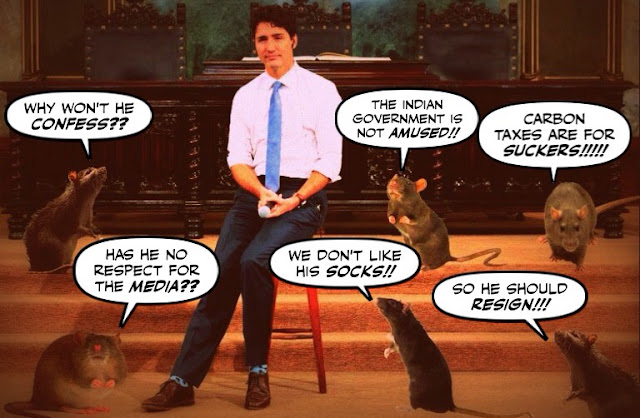 Just to please their corporate masters. 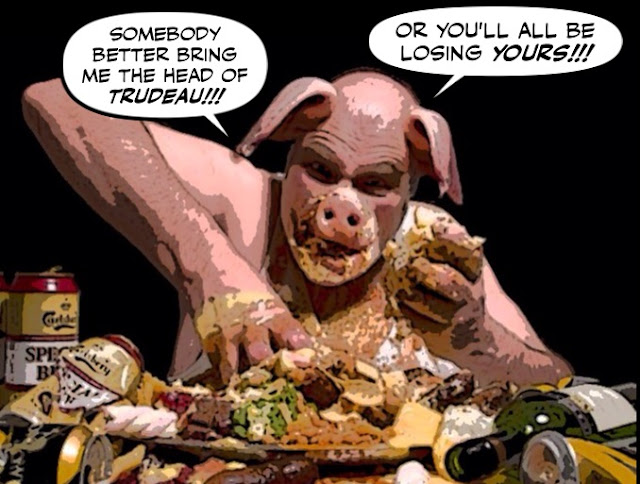 So what do we call them?

Rats, or hogs, or hookers, or all of the above?

And does it really matter as long as we know what to do with them?

Denounce them, boycott them, stop them.

Before they destroy our democracy...

That Sinclair tape is quite something. I can only imagine our Con media howling away away at the same time. It would be an ugly sound,but if it can happen there it can happen here.

Postmedia is as bad as the Sinclair group. Every day of the year it's Trudeaubthis Trudeau that. It is for all intents and purposes nothing more than a Con propaganda service. Andrew Coyne is so biased he should be stop pretending he's a journalist and go work for his darling Scheer.

The funniest effect of the Sinclair Mashup was when the RWNJ's stumbled across it.

It is up to the voters who they want to have lead their countries. If they want the likes of Trump and Scheer, they will have to live with and/or die because of it.

Sinclair Broadcasting looks more like a propaganda arm of the ult right. I think the Nazis had something like this also. Worked for them for awhile, perhaps it will for Trump and Scheer also.

When this frightening Sinclair thing happened, the first thing I in fact thought of was Postmedia. Thanks for all your great reporting on this, Simon. The CBC should ditch Robyn and put you in charge of the opinion section. I never would have known about the eerie similarities between my country and yours if it wasn't for coming here.

Speaking of lying, fake news: Not to be outdone, the Murdoch monster is apparently just as much of a menace in his native Australia as he's been in the U.K. and U.S. But lo and behold, look who else is showing up on the radar of a particularly racist deputy jackboot of Malcolm Turnbull's:

The alt-right darling Lauren Southern is preparing a documentary on the issue [of the "white genocide" conspiracy theory]. Fellow alt-right auteur Faith Goldy, sacked from Rebel Media after palling around too much with white supremacists in Charlottesville, described South Africa as the movement’s “flavour of the month”.

As far back as 2015, experts were warning of the “globalisation of white nationalism”. Morris Dees and Richard Cohen from the Southern Poverty Law Center outlined this development in the wake of racist murders by Dylann Roof, who was obsessed and affronted by the end of white supremacist rule in South Africa’s neighbour, Rhodesia.

Then, they said that “from the United States and Canada to Europe, Australia and New Zealand … white supremacists don’t see borders; they see a white tribe under attack by people of colour across the globe”.

Good old Ezra and his banshees have a fan in Australia's version of the DHS director. Peter "Duds" Dutton has expressed sympathy for the plight of the poor, pitiful Afrikaners and wants them to jump queue in refugee admissions "because they would integrate better in Australia", even as the aborigines live in squalor and legitimate refugees from the Middle East are trapped in concentration camps in Papua New Guinea.

This is the new face of Canada's Conservative Party. Apartheid defenders. And the co-founder of that deplorable outlet is pulling the levers for its present standard bearer, the Dishonorable Andrew Scheer. John Diefenbaker must be rolling in his grave.

"This is extremely dangerous to our democracy."

That was a brilliant video depicting the Fox News Philharmonic Choir(and others). They really need to work on their timing and pitch though before they appear on "Russia's Got Talent" but the message remains constant. These so called reporters of news are nothing but mindless puppets spewing out their corporate master's propaganda, America's own version of Russian and N. Korean state news.
If that video doesn't jolt enough American voters into seeing how they're being manipulated by the right then dare I say the dumbing down of America is complete.
JD

Hi anon...Our Con media may not howl like wolves or chihuahua's but the damage they are doing to the notion of balanced journalism is just as depressing. As I pointed out recently, there are reasons they are so biased, and all of them are shameful.

hi anon...Postmedia is clearly the worst and the most biased, and unfortunately since it's the largest chain in Canada its impact can't be muted. And I agree with you, Coyne is more of a propagandist than a journalist. But the Globe and Mail is equally biased, and even the Star which used to be a liberal paper is becoming more conservative. The way I see it they are all cutting their own throats, for if they fail to attract new, younger, and more progressive readers, they will have no future...

hi Jay...thanks for the link to the Wonkette story which I found both hilarious and deeply disturbing. It shows how the Trumplings live in a parallel universe, and have all the characteristics of a cult, including their own language. And unfortunately it also shows how hard it's going to be to remove that tumour from the U.S. and Canada. Forget the scalpel and pick up a chainsaw...

hi e.a.f....it's true that it's up to the voters to decide whether they want Trump and Scheer, but so many of them are so ignorant I'm afraid my faith in democracy isn't what it used to be. And it's not just North America, the situation in Britain is equally dire. There is a feeling that everything is breaking down, and progressives have yet to come up with a clear alternative, or stop fighting themselves. I'm still hopeful that will happen, but we are running out of time...

hi Jackie...thank you for your kind comment, and let me return the compliment. I have learned so much about your country thanks to your informative and always interesting comments. In this bleak time, you are a light in the darkness. As for Lauren Southern and Faith Goldy and all the other Rebel scum, all I can say is that at least now their masks have fallen off completely, and all can see them for who they are. My contempt for them couldn't be greater, and my desire to defeat them only grows by the day...

If Trump actually withdraws all the troops from Syria all his other stuff
will be chump change in the way forward.