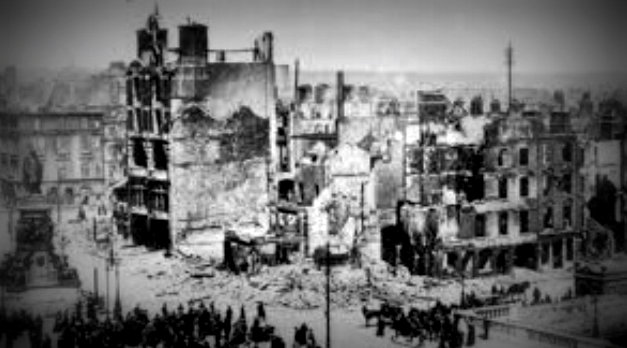 As you may or may not know, the Irish Republic is marking the 100th anniversary of the so-called Easter Rising.

The brutal battle in the heart of Dublin, which eventually led to the independence of that country.

An estimated 485 people lost their lives in almost a week of fighting between the republican rebels and British armed forces in the city. More than half of those who died were civilians, including 40 children.

And the theme is peace and reconciliation.

So in that regard I don't think this action by our Canadian ambassador was particularly helpful.


And as I'm sure you know, it has triggered a heated controversy over whether Kevin Vickers acted like a hero or a wild man.

Canada's ambassador to Ireland, the man hailed as a hero for shooting Ottawa gunman Michael Zehaf-Bibeau after he stormed Parliament Hill in 2014, tackled a protester at a ceremony in Dublin Thursday morning.

With opinion in Canada as divided as it is in Ireland.

Who does this Vickers think he is? He's not in Canada now. If there was a problem the Garda would have dealt with it. He should be reprimanded for not following protocol. We also have free speech in Ireland. Perhaps Mr. Vickers should be reminded of this.

Kevin Vickers is one of the true MEN left in this world. There are multiple ways you can protest legally, respectfully and peacefully. This protester broke all three and a stud like Vickers doesn't put up with that crap. Seriously, what if this person was trying to hurt people? Kevin Vickers was the only person there ready to protect everyone at that moment.

And while I realize that many people in Canada consider Vickers a hero, I don't think it's his job to provide security at events he attends.

And I think the larger question is whether Vickers should ever have been made an ambassador simply for the act of shooting Michael Zehaf-Bibeau. 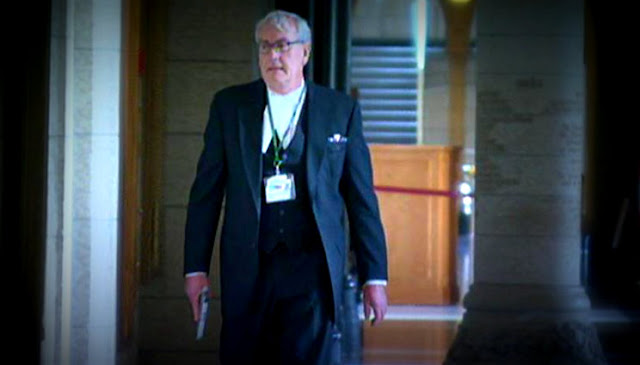 For his appointment may have been popular at a time when the country was in the grip of a terrorist frenzy.

But it was Stephen Harper's way of putting down the highly trained professionals of our distinguished Foreign Service.

Just like it was when he appointed his bodyguard Bruno Saccomani to be our ambassador to Jordan. 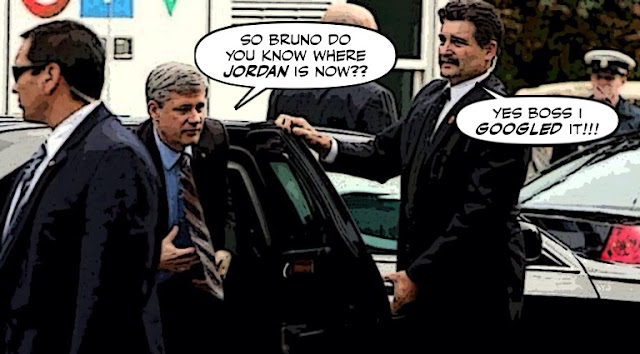 It was just another slap in the face to the men and women in our foreign service, who he knew hated him with a passion for what he was doing to Canada's once proud reputation.

But who would have known better than to get involved in the affairs of another country... 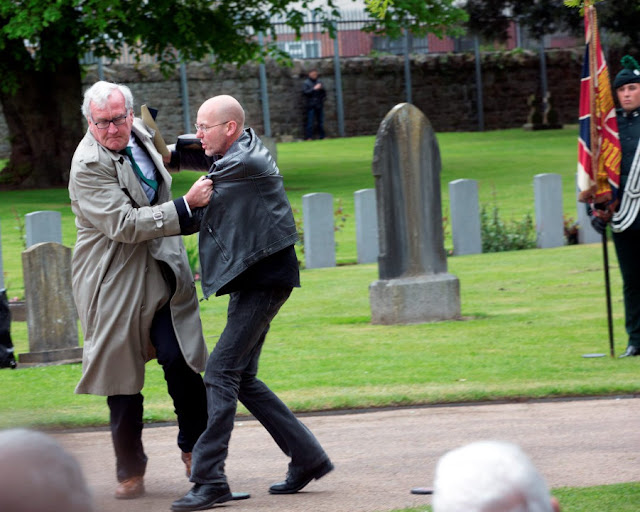 And overshadow with their actions what was for the Irish a solemn day of peace and reconciliation.

So yes, for me it was embarrassing. Canada needs more than men with guns to represent them abroad. We need to appoint trained diplomats again, and return to the diplomacy that once made us proud.

For I don't care what anyone says, that's not the way a Canadian ambassador should behave.

I'm sure that Vickers thought he was doing the right thing. But he was wrong.

And we can and must do better...

.. the next question must be.. what if that was a woman protesting eh?

Huge embarrassment. Just another dim-witted Con appointee. The only bone I'll throw this guy is that after being exposed to actual terrorist-type violence on Parliament Hill he probably is a little sensitive to this sort of thing. Still, he should have known better and let the *actual* security people in attendance deal with the situation.

I have always wondered why KV was "whipped off to Ireland" so quickly after the "incident on the Hill"?

It was another country and the police force of that country didn't think it was a threat. The most embarrassing thing I have ever seen a Canadian do.

Vickers is a Canadian hero.

hi salamander....you know when I watched the whole tape again it really made me wonder if Vickers is suffering from some kind of mental condition brought about by the traumatic events on Parliament Hill. The way he dragged that peaceful protester away was totally over the line, and all I could think of was thank goodness Vickers wasn't armed. And the angry look on his face reminded of Tom Mulcair. And why I wonder was he there at all, when the ceremony was something between the Irish and the British...

hi Omar...yes it was embarrassing and it does make me wonder whether Vickers is suffering from some kind of post traumatic condition. He should have been more sensitive to the occasion, and realized that some old wounds have still not completely healed. I have visited the courtyard at Kilmainham Jail in Dublin where the leaders of the Easter Rising were executed by firing squad. So I can understand why some Irish people might object to honouring the British dead. Although I am on the side of peace and reconciliation. Vickers ruined that moment for no good reason, and that's unforgivable...

hi kathleen...one of the reasons might have been that when the incident was more closely examined it turned out that Zehaf-Bibeau had already been shot by many others before Vickers finished him off...

hi anon...yes it was embarrassing, and what disgusted me was the way so many Canadians seem to think that Vickers had acted heroically, instead of making a fool out of himself. Honestly, it's scary how some Canadians can get carried away and celebrate violence so easily as if it was some kind of hockey game...

hi anon...I didn't want to say this, but I don't think a man who empties his gun into an already mortally wounded man should be considered a hero. Vickers couldn't know that at the time, of course, and he did his duty as he saw fit. But calling him a hero and making him an ambassador was more of a reward than he deserved...

Vickers is a prime example of political patronage trumping qualified appointments. Hero or not, the instincts of a cop are incongruous with matters diplomatic.

Interesting post. Thank you Simon. My first reaction to the recent incident was that he reacted correctly. Which I guess he did, as a police officer. He may well be suffering from PTSD, as you point out.

Yes, we need trained diplomats in these positions. This also never occurred to me when he was appointed. I just thought it was a nice thing to do for him. Definitely shows a lack of understanding by Harper on foreign affairs. Remembering all the cuts to housing for diplomats abroad that compromised their safety.

I have an enormous amount of respect for Vickers. Hope he is getting some psychological counselling.

Thought provoking as usual. Thank you.

I agree entirely with Simon on this one. Vickers was fingered as a "hero" because it was politically advantageous for Harper to invent one at the time. While everyone was celebrating Vickers great accomplishment, it took the focus off Harper who hid in the closet and pissed his pants.
Vickers supposedly shot someone and by association thereby saved the precious life of out glorious PM -that's the myth.

Is he a hero? I doubt it. But he was appointed by our glorious PM to serve as ambassador. Everyone should be asking why a Canadian ambassador is acting like a security guard. Does Vickers know he is ambassador, or does he believe his job is to manhandle everyone "heroically."
All I can say is thank God he didn't have a gun at the time otherwise... Well, let's just say the neo-cons would have made him into a two-time hero.

Simon..... Yep... Must be some kind of mental condition. Too bad there was no money on the budget for mental health issues...Maybe this Canadian Embarrassment would be able to get some well need help!!!! FS

Hold on, correct me if I'm wrong here, Simon, but every piece I read on this the ceremony say that it was held for the British soldiers who died during the Easter Uprising, not the innocent civilians, women and children, who mostly died from these same British soldiers artillery fire or the freedom fighters who tried to take back their country. I'm not even going to touch on the matter of Vickers strong armed tatics because I don't think he should have been there in the first place. Now lets be real here, this was an occupying army in a foreign country. To me, this is all about optics, would we send our Ambassador in Vietnam to a ceremony memorializing American Soldiers, and only American soldiers, who died during a famous battle in Vietnam. Or would we send our Chilean Ambassodor to a ceremony memoriaizing the rise of the Pinochet regime, in Chile? Of course not, it is offensive. vickers should have cordially declined the offer. I grew up hearing stories of Orangemen parading past Catholic enclaves, basically insighting riots. This is the same, if this was really about closure and not ideaology, it wouldn have happened in a public setting not a military graveyard, with everyone who tragically died in this impearialistic war of conquest memorialized. The British held the people of Ireland under their boot heels for over 800 hundred years. This was not a feel good ceremony, to me, ithis was a 'shove it, finger to the people who died trying to free themselves from the British yoke.

Vickers acted inappropriately. No one was in danger. He is no longer a cop in Canada. He had no right to do what he did.

It might have been different if the guy was armed and about to kill someone and no one else was taking action, but that wasn't the case.

Yes eaf, I think you are right. Hence strong possibility of PTSD. Taking another life under circumstances of October 2014 is nothing to sneeze at (forgive me if this sounds trite, but I cannot find other words at the moment). Unfortunately, many talk about "war on terrorism" without any first hand experience with violent death. Fortunately, I do not have this first hand experience, but I have seen loved ones struggle with it in their chosen professions.

Let's not judge Vickers too harshly.

Definitely shows a lack of understanding by Harper on foreign affairs.

It is very hard to find any international action by Harper that shows any understanding of foreign affairs.