The Trudeau Haters and the Con Media 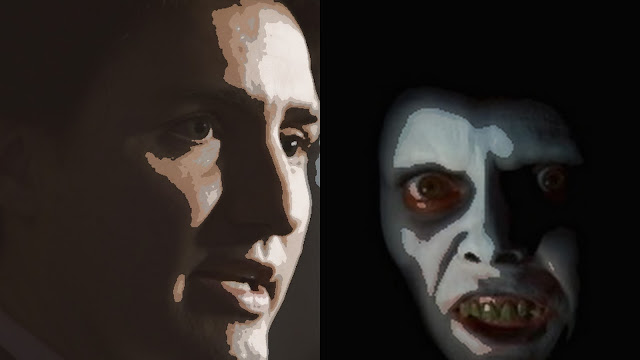 Sometimes when I hear the Harper Party, the Mulcair Party, and all the other Trudeau haters going after Justin Trudeau with blood in their eyes, and foam in their mouths.

I can't decide whether I'm living in the New Canada, the liberated Harperland.

Or the Democratic People's Republic of Korea.

And now to make matters even worse, here comes our own Marie Antoinette, the Queen of the Plagiarists, Margaret Wente herself. 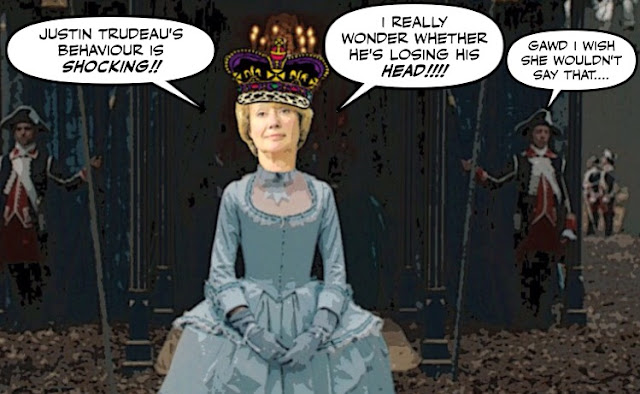 Who after a brief absence, caused by her latest episode of serial plagiarism.

Has returned to her bully pulpit and is going after Justin Trudeau. Again.

And leadership is the question that lingers over Mr. Trudeau’s head. We know he’s charming. We know his heart is pure. We know he stands for All Good Things. But how does he behave when he’s frustrated and impatient? If his instinct is to throw a hissy fit, how will he react when he’s in a real jam? 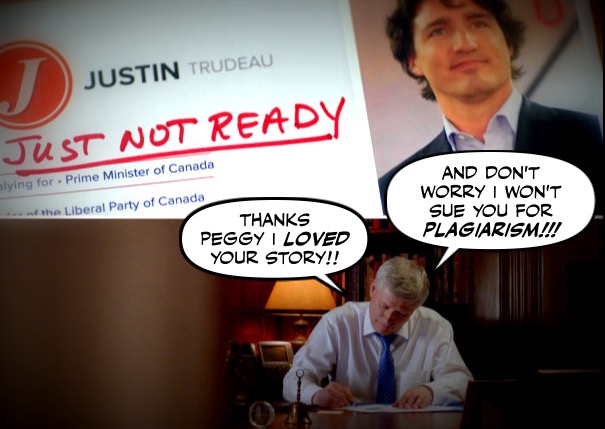 And wondering whether, unlike Stephen Harper, Justin is fatally flawed.

Justin has disarmed people with his sunny ways and one-armed pushups. No one ever expected him to strong-arm them. His petulant breach of protocol and manners comes as a nasty surprise, because we’ve never seen that side of him before. Is it an aberration? Or is it a real flaw in his temperament? If so, it’s not trivial. His discipline and his emotional intelligence failed him in a very public place. And it was a very easy test.

Which strangely enough is what I've always wondered about Wente. Does she borrow the work of others because she's just distracted, or bone lazy? Or is it a fatal flaw or a recurring compulsion?

Or is she losing HER mind?

Last time, if you recall, Wente was allowed to write a column in her own defence, attacking her critic by name, denying she was a "serial plagiarist" and saying she's often a target for abuse because of the kind of conservative world-view she articulates.

And is that ghastly Con really the right person to judge the character of others?

And of course others have even more serious questions. Like why hasn't the Globe fired her for her repeated acts of plagiarism? 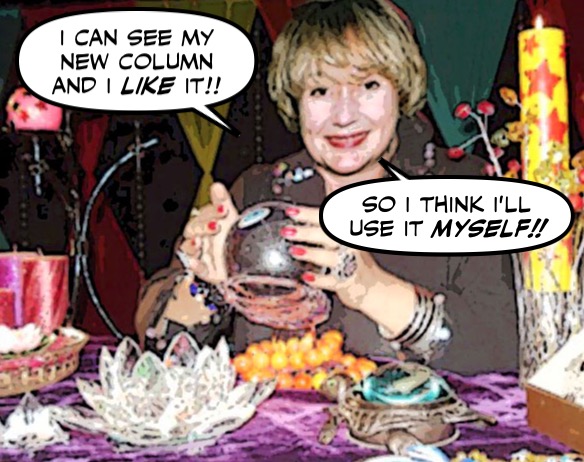 It's inconceivable to me, as a former newsroom manager, that Wente seems to have received no warning when she got her slap on the wrist four years ago. You know, something like "Peggy, if this happens again, you're gone."

If she were anyone else, she wouldn't have even been given a second chance. Plagiarism -- an act of fraud, stealing someone else's work and claiming it's your own -- is considered a capital offence in both academia and journalism.

But sadly the answer is too easy. For the Globe managers credibility isn't the real challenge.

This is turning into a management fiasco that has the potential to damage the paper's brand. How much trust can we put in the Globe to cover the news when its top editors have failed to put two and two together enough to thoroughly investigate evidence that its most prominent columnist may be a habitual thief?

For them and others in our Con media the real challenge is how to bring down Justin Trudeau by whatever means necessary.

And in that regard Margaret Wente is a useful asset... 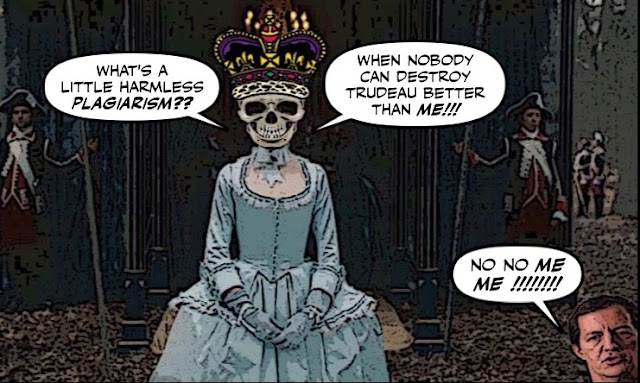 Oh boy. Can you believe it?

We thought we were living in the New Canada, the former Harperland that Justin Trudeau liberated.

But the Con media is still with us, still trying to take us back to those dark days,

And along with all those Trudeau haters, with blood in their eyes.

Still trying to turn our young Prime Minister into a monster... 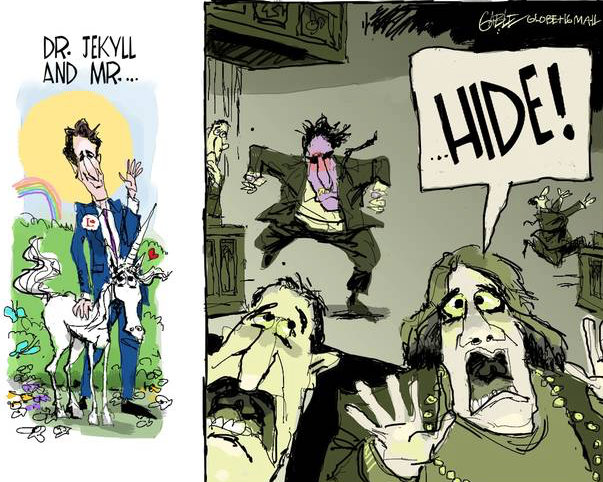 Peg, Rosie and Blactchford this is what is needed to be a success. A con heart

Maybe The Globe is trying to up their numbers by attracting incredulous readers. The ones who think WTF, is she serious??! Marie-Antionette image quite suiting for this deluded woman.

My - our(?) - generation just doesn't get it. The younger generation is tired of "the old ways". Trudeau and gang have found a way to engage them. They don't know (don't care?) about how this is supposed to work. They are more interested in getting it actually working for a change.

They are more than happy to cut J Trudeau a break. And, so am I, actually (old fart that I am). He got them - the bulk of the younger generation that has not been interested - engaged. Until Mulcair and the NDP and Rona and the Conservatives figure this out (and I'm talking beyond their comparatively small hard core young supporters) they're going fall farther and farther behind.

The MSM is also "infected" by the same myopyism. I asked my 33 year daughter about the "incident in parliament" and her response was that as far as she could see their majority of opinion was favourable to Trudeau. She said (in terms of the responses to Trudeau's actions) only Liz May didn't have her head up her ass!

It's like Trudeau's "whip out our F-18s and show how big they are" comment. Everyone at my place of employment loved that. The younger as well as the older workers. Of course it got played by the Cons and the media as Trudeau's petulance and inexperience talking, but people I encountered relished the edgy street-speak. Trudeau is doing a fine job. More than a fine job actually. And that the two opposition parties (and their fervent supporters) are going out of their minds in attempt to find fault pretty much proves that.

If Trudeau is "fatally flawed", then what is Harper???

And who was in charge of that for the last ten years? I do not understand how BC keeps accepting Alberta's unrefined shit. I can bet that Alberta will not share any profits with B.C either. Yep B.C"s risk is Alberta's gain.......But then again maybe that's how Chrissie Clark keeps getting an extra 50g's a year! Not sure how that relates to Simon moving to Toronto? FS

Simon - J Trudeau is very much a pragmatist when it comes to divisive issues. I am a Green Party supporter. However I understand where Trudeau is coming from on most issues. His answers are not always what I would prefer. But, as we need to understand, the answers are not black-and-white as the Harper/Ambrose Cons want us to believe. Or, for that matter, as the extreme left believes either. I wish it were and that certain "progressive" action could be taken on many issues immediately. "Act now or it's too late!"? If so then it is already too late unfortunately. And that may be so.

All that being said, I'm glad we have Trudeau the Younger as PM rather than Harper or Angry Tom (or should that be Thomas).


A friend of mine (roughly 30 years old) is wildly indignant about the H of C incident. However she is furious at the NDP saying things like "How much have they damaged us" and "It would not have happened with Jack Layton". As far as I can see it did not hurt Trudeau at all.

You were right Simon, the younger crowd are not annoyed at Justin. If anything he made points.

Well,for Harper we probably should have Pope Francis to perform an exorcism before letting him return to public life.

So let's allow Simon time to have fun and not have to clean up hateful comments:-))

Love to see pic of you jabbing fingers at tiny screen while hanging from a mast (? I'm no mariner lol).

The "kid", "fatally flawed"? What planet are those people living on. He seems like a nice guy, good looking, athletic, smart. Fatally flawed?????? That was harper and his herd, not Trudeau.

So he marched across the floor to break up the water cooler jam, big deal. Some one had to get things going. He decided to do it.

Wente, O.K. Simon, for this article I would have preferred another coloured dress. I do like the whole outfit, but another colour might have been better, like green with envy.

Now as to Just not ready. Oh, I think he's just really ready. Its about time we had a P.M. who won't put up with the B.S. in the House of Commons. All of those people are being paid a decent salary by the rest of us to do the country's business, not play don't let the con through the line. We have legislation to pass. We have a few problems out here in B.C. Alberta isn't doing that great with all the fires. Like can those NDPers and Cons not get on with business.

As to elbow gate. These people need to go to a Boxing Day sale and see what real elbowing is all about,.