Con Apocalypse: The Con's Rabid Base is Shrinking 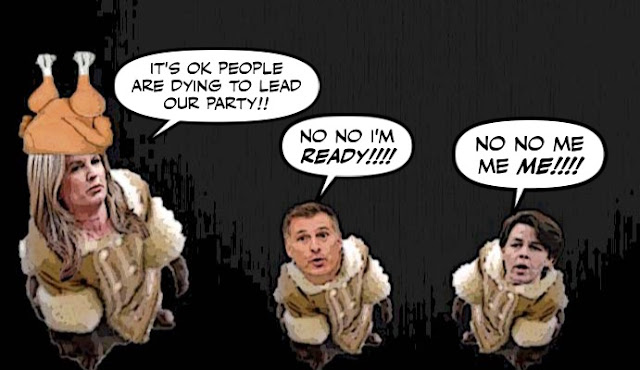 Pity poor Rona Ambrose, it's all going so horribly wrong.

The Con leadership race has only attracted two mediocre candidates so far. And so desperate is the situation that some Con MPs are trying to get Ambrose to throw her cap or her turkey crown into the ring.

A Draft Rona Ambrose movement has been launched by a group of Conservative MPs who are attempting to amend the party’s constitution to allow the interim leader to seek the permanent leadership. 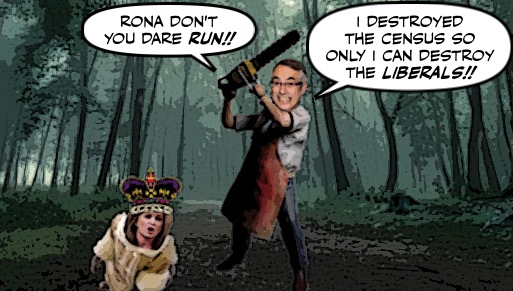 He is demanding that she honour her "solemn vow."

A former top Conservative cabinet minister — and a potential leadership candidate — says interim leader Rona Ambrose would damage her credibility among her caucus colleagues if she breaks her promise not to run for the permanent job.

"I think Rona Ambrose has been very clear and she made a solemn vow prior to running for the interim leadership that she would not run for the leadership," Tony Clement said in a scrum Monday.

And one can only imagine what Kevin O'Leary, the second most popular potential leadership candidate, must be saying or screaming, about both Ambrose AND Clement. 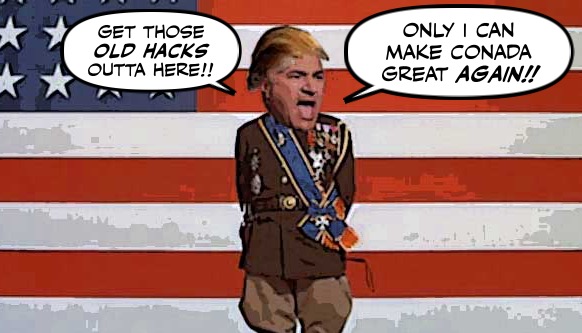 Business mogul Kevin O'Leary says that if the Conservative Party does not undergo a radical reinvention, and uses the same approach it did last October, they "will forever lose elections."

"If the old political hacks that run that place now think they can take the same strategy into the future, they are 100 per cent wrong -- they will forever lose elections," said O'Leary.

And as if that wasn't bad enough, Ambrose and her Cons are facing an even greater existential threat.

It seems that their rabid base is shrinking. 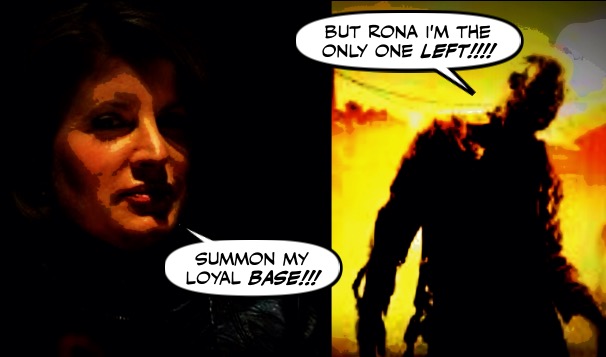 Since their defeat in the last federal election at the hands of the Trudeau Liberals, the Conservatives have been consoled by the view that their “basement” in popular support was a robust 32 per cent. New research conducted by Nanos suggests that the basement is noticeably lower now.

Fast forward to the latest ballot tracking by Nanos, and one sees an emerging and perhaps troubling trend for the Conservatives. Current support for the Trudeau Liberals stands at 43.2 per cent, followed by the Conservatives at 25.8 per cent, the NDP at 19.3 per cent and the Greens at 5.5 per cent nationally.

On that front, now one can report a new Conservative basement. It is 26 per cent, not the 32 per cent from the last federal election.

And they now face a double challenge.

It should bring into focus for the Conservatives the importance of a leadership renewal process that, at the very least, first starts by recapturing Conservative supporters who stuck with them on election day and then trying to move forward in the face of a Liberal government which remains, as of the latest ballot tracking, popular.

They must try to woo back the members of their hard base, who have abandoned them to support the Liberals. Or died of old age or disappointment since the last election.

While trying to attract more moderate supporters to help make them competitive again.

And judging by the latest ad campaign cooked up by the depraved kids in the short pants who still run the PMO... 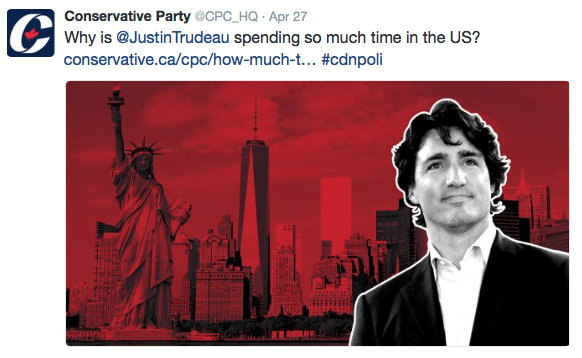 That's not going to be easy. Not when they're so crazy desperate.

In fact, I think I can confidently declare it to be impossible.

And sum up the situation this way:

The Cons are still looking like the Harper Party. They can't renew themselves without alienating their shrinking base further.

They are so beaten and humbled they can't attract any decent leadership candidates. Even as the Red Tories and the Reformers prepare to battle each other over control of the party, and hopefully tear it apart.

Because of their shrinking donor base, they're also running out of money, and keep blaring out this desperate message over and over again... 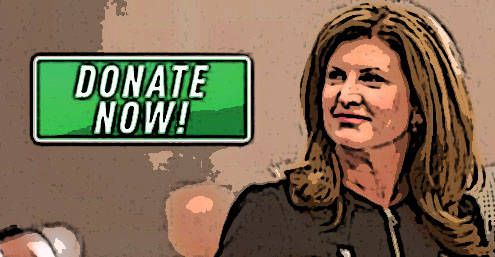 And now they're digging themselves an even deeper basement... 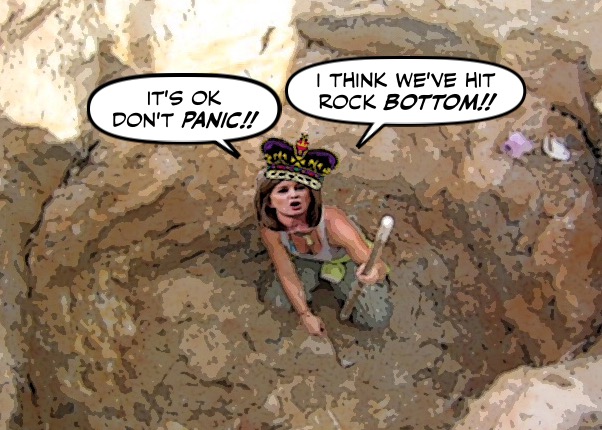 Which with a little luck will turn out to be their grave.

Wow. What a great ending.

Stephen Harper made the Cons in his own image.

And when he went down the rabbit hole he took them all with him... 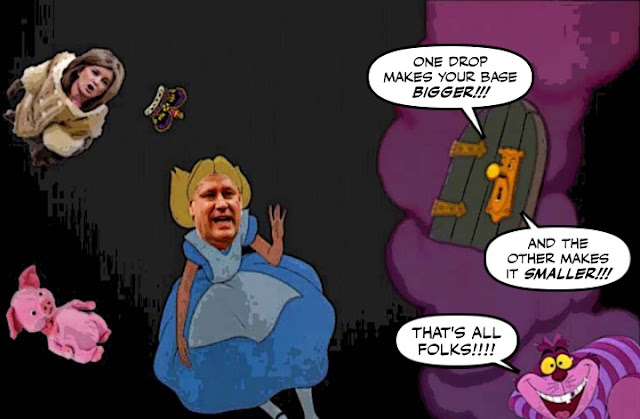 Tony Clement will save them, lol. I guess the idiot really believes he has a chance. From Harris to Harper, I don't think one could sink any lower.
TS

On Friday last week *drum-roll please* experts in the Department of Finance confirmed again that Conservatives left the Liberals a healthy surplus.

When asked about this surplus Finance Minister Bill Morneau said, "we don't want to focus on this issue."

Of course he doesn't, when his own department, the Parliamentary Budget Officer, and economists are telling him that he is solely responsible for any deficit Canadians will have to pay back.

Funny... it was just the other week the Lieberals were saying they were left with a deficit. Sunny ways...

Except for their last year in power the Cons ran deficits totaling around 130 billion over the previous 8 years. The small surplus in the election year was made possible by selling GM shares, raiding the EI surplus plus other slight of hand ploys where money borrowed in previous years was used to show a surplus rather than pay down debt. Whats worse is that Canada's balance of trade surplus went negative under Harper's watch and never recovered thanks in large part to his fixation on the great oily dream. The budgetary and trade data is freely available on the Statscan website for anyone that's interested.
I did not criticize the Con government for running a deficit for several years after the 2008 financial crisis but it ran on longer than necessary and their myopic focus on resources left Canada in a very vulnerable position when commodities collapsed on 2015.
RT

And let's not forget how Harper gutted the Public Service and all the safety watchdogs he left toothless.
Yeah, and as RT points out, he was quite the Bay Street "wonder boy" whose motto must have been "buy high, sell low".
Harper's only skill was slash and burn, as an economist, he failed miserably.
JD

Canadian scientists are now allowed to speak out about their work — and the government policy that had restricted communications.

It could take years for Canadian scientists to recover from heavy funding cuts, low morale and tight control over communication. Looking back over what happened, Macdonald remembers something his grandmother once told him. “It takes ten years to make a good garden, but you can wreck it in six months,” he says. “It’s like that with science.”

If the party wishes to maintain the status quo, Ambrose is the best Candidate. O'Leary is a death wish, on the other hand we have just all watched Cruz bow out and leave the field to Trump.

If the Cons are to survive in a new age, they need to bring the word Progressive back into their title and philosophy. If they don't do that, they will simply slide to 3rd place after the next election, unless of course something goes horribly wrong for the Liberals.

Tony Clement already has his campaign slogan that he thinks will reward him with the Con leadership: "A vote for me means a gazebo for your riding!"

hi TS...yes, can you believe Clement's ego? It's like he's living in a parallel universe. Like Leitch and Bernier he clearly believes he has nothing to be sorry about, except losing his limo. And I find his behaviour and his pretensions absolutely outrageous. I should be happy that somebody so mediocre wants to be Con leader, but instead it offends my sense of decency...

hi anon 9:17...what have you got against surpluses? The Cons may have squeaked out a tiny surplus, but only by robbing Paul to pay Peter. And they did leave us in a situation where it's impossible to balance the budget without continuing to slash services which is in effect a state of permanent structural deficits. So I would take my party hat off since there really is nothing to celebrate...

hi e.a.f...I would love very much to see the word Progressive brought back into their title and philosophy. I believe it would make them a much more Canadian party, one I wouldn't vote for but could live with. But the problem is they depend on the Alberta vote so much, they can't get the Reformer out of it....