How the Fort McMurray Disaster is Bringing Canadians Together 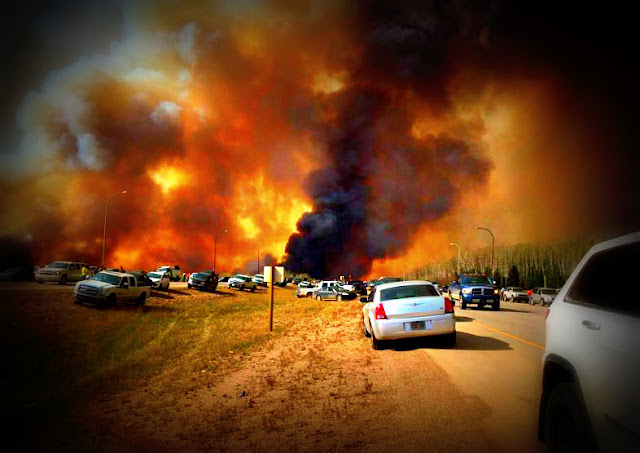 It may be small consolation to the thousands of people who have lost their homes, or their businesses, or have been forced to flee the Fort McMurray inferno.

But I have been incredibly moved by the way Canadians all over this fractious country have come together to help them.

And there couldn't be a better symbol of that unity of purpose, than what happened in the House of Commons yesterday.

When Justin Trudeau crossed the aisle to hug an emotional Rona Ambrose.

It was a classy gesture, but it only reflected what was happening all over the country.

For it's also the 100 firefighters from Ontario heading for Alberta, along with the water bombers from Quebec.

Or the volunteers in the nearby town of La Biche running a makeshift evacuation centre... 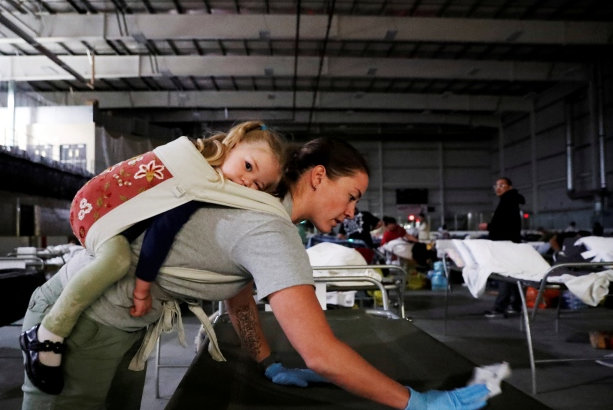 With a special place for pets... 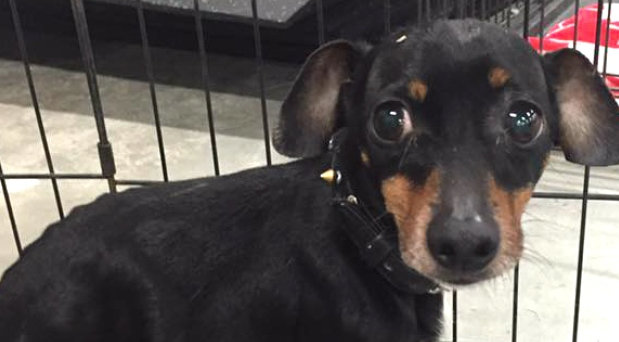 Like that little fellow who must be wondering why he's in a cage, and what the hell is going on? But is at least in a safe place with his family.

It's also all those people in Atlantic Canada opening their hearts and wallets to help the people of a town many of them know so well.

You kind of get a sense for how things are going to go, and right from the get go, we knew this was going to have a higher impact, particularly among Atlantic Canadians,” said Bill Lawlor, Disaster Services with the Canadian Red Cross. “I mean, there’s not one of us who doesn’t know someone who is living, working, or has worked in Fort McMurray.”

It's the group of Syrian refugees in Calgary trying to help the people of Fort Mac, even though they have so little. 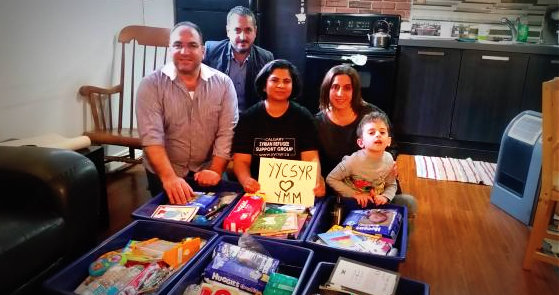 They’ve only been in Canada for a few months, and have little money or possessions, but a group of Syrian refugees in Calgary has launched a donation drive to help support displaced residents of Fort McMurray.

At least 30 Syrian families have donated $5 to $20 to the drive, which will help purchase toiletries, pillows and other household items for Fort McMurray residents devastated by the wildfire.

And most movingly for me, it's also the residents of the little Quebec town of Lac-Megantic doing their best to help, or return the favour.

Donations poured into Lac-Megantic from across Canada in the aftermath of the 2013 rail disaster, and now the Quebec town wants to give back by raising money for the victims of the wildfires in Fort McMurray, Alta.

"Three years ago it was our population that was struck down by tragedy, and all of Canada mobilized itself for us," he said. "Now, it's our turn to support this community."

The little town that lost so many and so much in this nightmarish inferno... 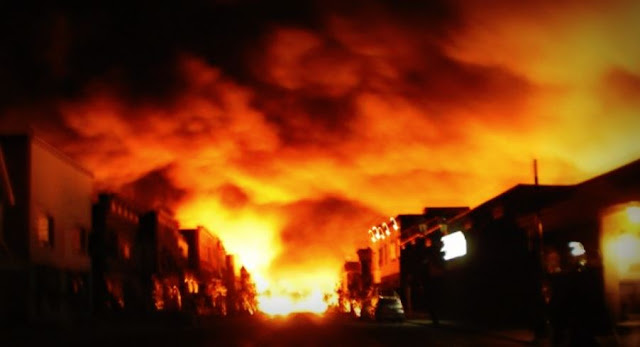 And has never really recovered.

Which should remind us that the struggle of many of the people of Fort Mac will continue long after the flames are finally extinguished... 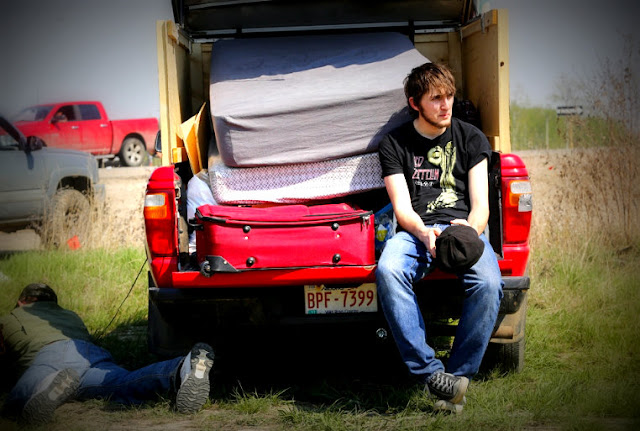 And so our spirit of solidarity will also have to continue. Which won't be easy, because this is a fractious country.

But after what I've seen in the last three days, I feel that anything is possible,

You know it's funny, I got a call yesterday from one of my boyhood friends in Scotland. The son of a fisherman who now works on an oil rig in the North Sea.

He had seen the apocalyptic pictures on TV and wondered whether I was in any danger. Because Hamish has many talents, but geography was never one of them.

And after I stopped laughing, I told him: " No, no, I'm fine, Canada is a big country and I'm about as far away from the fire as I am from you."

And then I added "but we're all feeling bad because we're all Canadians."

Which must have sounded as stupid to him as his question sounded to me. Wot?

But it is how I feel.

We are never so big and so beautiful than when we pull together as a country, and show our solidarity for one another... 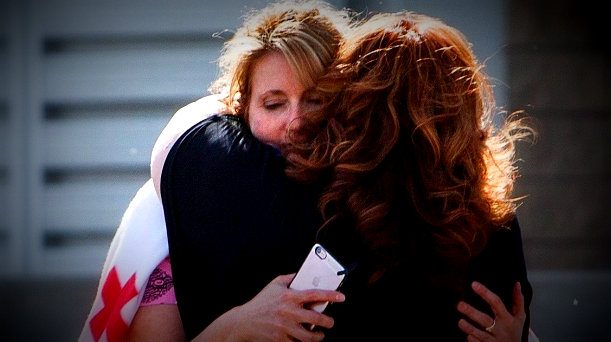 I know that spirit of solidarity is fragile, and it probably won't last.

In this sometimes grumpy country I'm always being told that nothing good ever does.

But as you know, I never believe that.

And I'm enjoying it so much, I hope it lasts forever...

Cheers to Hammish! The Queen also posted a very nice message to the people of Fort McMurray. It really is just so sad to think of the devostation of that little town. I truly hope that those people find some solace knowing that Canadians want to help in whatever way they can.

I have to admit that when Justin hugged Rona, it brought "tears of Hope" to my eyes........

Me too Simon.
I think Rona was shocked at PMJT's hug. It was spur of the moment, unscripted and from the heart. Something a decent person does without reservations. Let's hope it leads to a more respectful Question Period.
JD

The outpouring of support has been amazing and overwhelming. Lac La Biche has simply floored me with the aid they have provided and continue to provide. Personally, I am so touched from the spirit and kindness I have seen here. One gentleman dressed up in a Santa suit and I saw him yesterday holding a young toddler's hand as they walked and the big smile on the little guy's face was absolutely priceless. Fort McMurray, despite the press and the stereotypes is, at its core, a great community of people. We will get through this. We will rebuild.

Hi TS...it is a truly shocking event, and it only adds to the number of people in Alberta who are going through hard times. I have had some choice words for that province when some of its residents were swaggering around and putting the rest of us down. But now I feel genuinely sorry for them, and will do anything I can to help them..

Hi Kathleen...Well as you can imagine when I first saw that video I practically fainted with shock, as I'm sure some of her Cons did. ;) But then I thought yes, that's how it should be. Now is not the time to play politics, now is the time to come together...

Hi JD....I too wish that we could have a Canadian parliament where all MPs would treat each other with respect, or just like Canadians. But I'm afraid that the divisive Harper years have done that spirit great damage, and we won't get to that point until the Cons can get him out of their system. Still we are definitely heading in a better direction...

Hi Way Way Up...how great to hear from you. I was worried that you might have been caught up in that nightmare. And since this little blog has only one northern correspondent, we simply can't afford to lose you. ;)
Seriously though, isn't it great to see that outpouring of support? When I was writing this post I had so much material to work with I didn't know where to begin. And you're right, Fort Mac is a symbol or a stereotype, but real people live there and they need help. I think I might have told you that when I was in university my first summer job was at a mine in Northern Ontario. And I will never forget how warmly and kindly the people up there treated this city slicker. There is a spirit up there that those of us in the south could learn from. As for the rebuilding of Fort Mac that won't be easy but I'm sure you can do it. And I thought I'd pass along what a resident of Lac-Megantic had to say in that regard:

'Be brave. Don't give up, and rebuild while the adrenaline's still pumping,'' he said. ''Get back on your feet right away, breathe in life and try to move forward.'"

It will be a challenge, but this whole country was a challenge (winter) so go for it and good luck....

Everyone has been doing their jobs and doing them very well from the RCMP Officers, to the FIRE FIGHTERS, it was incredibly brave of those 200 fire fighters to stay in the town to protect it, the volunteers, the oil companies opening their dorms. Every one has just been amazing.

It is truly amazing that a town that size can deploy itself with out any fighting, just orderly evacuation. its says a whole lot about Canadians.

How the Fort McMurray Disaster is Bringing Canadians Together.......... Except for Alberta itself....... 30 million from hard working Canadians....... And not a thank you!!!!!! Unless you think that comments like "anyone who voted NDP should be shot".... "Trudeau should have a penis shoved in his mouth" "NDP started the fire".... "Trudeau should have a bullet in his head" yep that's the Alberta mentality for ya!!!!!!!! And we cannot forget the never ending racist comments like "helping immigrants but not us" bah bah bah. Sounds more like they should be relocated to the Bible Belt in the US. You know that me, me attitude!!!!!!!! How come all the Philippine nannies in Fort Mac are not grouped into their anti immigrant mentality.

As someone who escaped the fire I can assure that I've said many thank yous and shaken many hands over the past week. I think it's important to remember that many people there have family connections across the country so this just isn't an Alberta story but has repercussions across the country. It's easy to focus on a small group of people. I've heard of a tweet from a guy in Taber who said he hoped my community burned to the ground along with all the people and while this irritates the hell out of me I don't take what he said as representative of other Canadians.

Hi anon...Because the pictures are printed on a very white background they can sometimes appear washed out. So all I do is try to improve the contrast not really modify them. It also helps give the blog a more consistent look. However if readers don't like it , I'll stop doing that...