I realize that many progressives don't like Barack Obama, and like to claim he was worse than George Bush or Richard Nixon.

Like some progressives in this country like to claim that Justin Trudeau is worse than Stephen Harper.

But although he was not perfect, I have always admired the first black President. I believe that despite the foul racist attacks against him, he represented his people with dignity and class.

And boy was he funny. 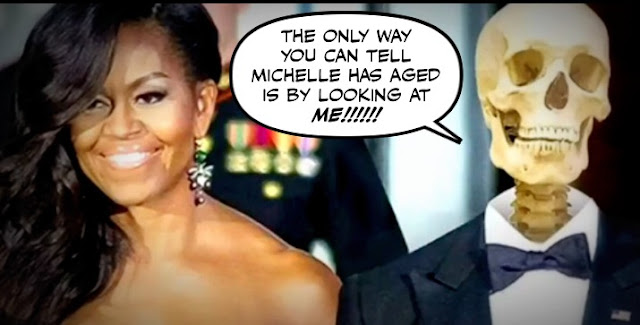 For in his final appearance at the White House Correspondents dinner he had a joke  aimed at just about everybody.

Barack Obama has taken satirical swipes at Donald Trump and, more surprisingly, Hillary Clinton and ended his final White House correspondents’ dinner by literally dropping the mic and departing with the words: “Obama out.”

A joke about Donald Trump.

“The Republican establishment is incredulous that he is the most likely nominee,” he continued. “Incredulous! Shocking! They say Donald lacks the foreign policy experience to be president but, in fairness, he has spent years meeting with leaders from around the world. Miss Sweden. Miss Argentina. Miss Azerbaijan.”

Followed by a pointed dig at the media for having given Trump so much free publicity.

“I don’t want to spend too much time on The Donald,” he said. “Following your lead, I want to show some restraint because I think we can all agree that, from the start, he’s gotten the appropriate amount of coverage, befitting the seriousness of his candidacy. I hope y’all are proud of yourselves. The guy wanted to give his hotel business a boost and now we’re praying that Cleveland makes it through July.”

At that, Obama shook his head slightly and grunted: “Mmm, mmm, mmm. Mmm.”

A joke about Hillary Clinton.

“Here we are, my eighth and final appearance at this unique event and I am excited. If this material works well I’m going to use it at Goldman Sachs next year. Earn me some serious Tubmans,” – references to Clinton’s lucrative speeches on Wall Street and the recent decision to put the founder of the Underground Railroad on the national currency.

A joke about Justin Trudeau.

A joke about the toll his years in office have taken on him, and his reception by Prince George. 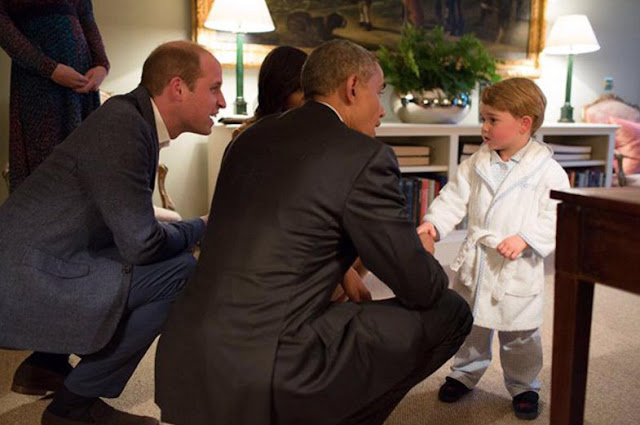 “I’m grey, grizzled, just counting down the days to my death panel.” He added: “Even some foreign leaders have been looking ahead, anticipating my departure. Last week, Prince George showed up to our meeting in his bathrobe. That was a slap in the face. A clear breach of protocol.”

But the one I enjoyed the most was the elaborate video skit called the Couch Commander.

Because it does take a great man to be able to laugh at himself, at his battle to quit smoking, and at all the foul attacks the Republicans aimed at him.

And although comedian Larry Wilmore, who had the misfortune to follow Obama, wasn't that funny. He did get this right:

“When I was a kid, I lived in a country where people couldn’t accept a black quarterback,” Wilmore said. “Now think about that. A black man was thought by his mere colour not good enough to lead a football team. And now to live in your time, Mr President, when a black man can lead the entire free world. Words alone do me no justice.

Because that's how I feel. He was a great President.

And I'm really going to miss him...

wonder if we are going to be saying the same thing about JT. probably.
politics is an unfuckinggrateful business.
thank you mr. president

Donald Trump will be the new president!

hi Luce...I wouldn't be surprised, progressives have a disturbing propensity to devour their own leaders. It's their least appealing and most morbid characteristic. But yes, it is time to give the first black president his due.For despite the most insane attacks he has had to endure from the Republican tea baggers, he never lowered himself to their level, he never lost his cool, and was a wonderful model for every black child in America...

hi anon...dream on, it's just not going to happen. By the time the Democrats are finished with Trump, all that will be left of him is his hair, floating gently to the ground, and wailing like a baby....

I'm not so sure about that, Simon. A scant few months ago I would have confidently placed your 'zero probability' stance on Trump's combed-over head, but as this thing progresses to the finish line I can see this quack becoming president. Hopefully it wont play out, but..

As a black man, when Obama was elected 8 years ago I like many others was optimistic about having him as our president. However Obama has completely ruined race relations, he has divided the country back to Jim Crow days. Under Bush, there wasn't massive story after massive story of unarmed black man getting shot by police. There weren't riots every other day and protests, and the amount of hate and animosity between blacks and whites and mexicans etc... Donald Trump's popularity is the direct result of Obama's race baiting for 8 years defending (most of the time) criminals and pushing this sense of injustice and entitlement in the black community. Good riddance.

Simon I also predict Trump will club Hillary like a baby seal. I am as progressive as they come, but would pick the devil I know over Hillary.

I don't believe you are a black man.

It amazes me that Obama achieved so much, yet is so unrecognized by his fellow Americans. I do believe that racism is the under lying reason. I could not believe the disgusting characatures of him when I was in the South two years ago. Such a disrespect for the Office of the President taints the whole country.

I think that Obama will achieve more than Clinton has post presidency. He certainly has brains and heart to keep going.

You are so right Simon, a great President, I will miss him also. It must really suck for America....Trump or Clinton!!!!! I would hate to have to make this choice.

I am with Simon on this. Americans cannot be that stupid!!!!!!

Never thought I'd live to see a black American President and am glad I did. He did the best he could in his job. Unfortunately he had a Senate and Congress who were not going to allow him to do his job. In my opinion, that wasn't just politics, it was racism.

President Obama has a great sense of humour and I do hope his life goes well once he leaves office. He made history! He spoke out when black children were shot.

hi Omar...I only said that to deflate that Trump supporter. There are indeed reasons to be concerned. I'm worried that Hillary Clinton could be hit by some scandal mid-campaign. And I am concerned that many Sander's supporters might not vote for her. I've got some interesting material on that and will include it in an upcoming post after I see what happens on Tuesday...

hi TS...considering the times we are living through, and the disgusting way the tea baggers have attacked him, I believe Obama has done a great job. And he is the best President I have ever seen...

hi anon...I don't agree with anything you say. Obama is not guilty of race baiting, the Republicans are. And if there is animosity between blacks and whites it's not because of Obama who has always behaved in a classy way, even when people like Trump were claiming he wasn't even an American...

hi anon...yes after Obama it is going to be a bit of a come down. And it's not the best choice. I was pulling for Bernie but it seems he was ahead of his time. And it will take another election for what he began to take effect...

hi e.a.f...yes Obama was treated in an absolutely abominable manner by the Republican tea baggers, but he never let them drag him down to their level, and was among other things the coolest President ever...

Yes, unless there is another great social movement like the mass strikes between the wars or the Civil Rights and then anti-war movements in the 1960s and early 70s, I don't think even Bernie Sanders could push a national healthcare system through.

And yes, Obama is the king of deadpan humour.

You're right, Saunder couldn't push through a national health care system because he would need the senate to be all democrats who believed in a nation health care system and that isn't going to happen for a long, long time. Too much influence from PACs.