The Fort Mac Beast and Our Fiery Future 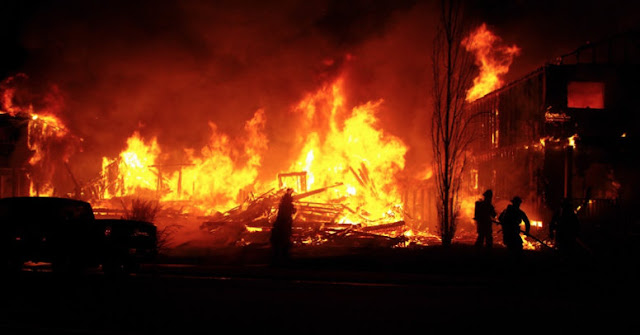 I've tried to be as positive and as sensitive as possible about the fire that almost consumed Fort McMurray.

I've tried to point out all the ways that catastrophe has brought us together as Canadians.

And I completely understand why Justin Trudeau and our other political leaders have been reluctant to blame that fiery apocalypse on climate change. 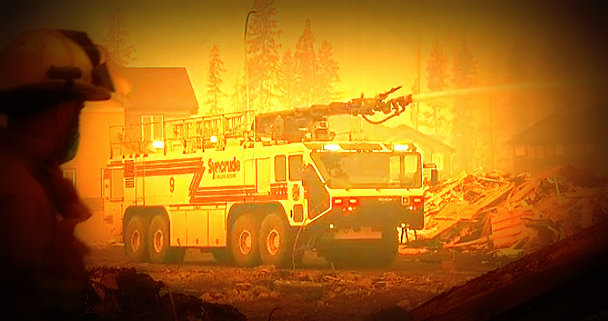 For the simple reason that nobody can be that sure. And for all the reasons Tom Walkom lists here.

The reason why he (Trudeau) and other politicians are tiptoeing around the issue this time, it seems, is that they fear giving offence.

In the popular imagination, Fort McMurray is linked to the Alberta oil sands. They in turn are linked to the carbon emissions that contribute to global warming.

Politicians fear that to even use climate change and Fort McMurray in the same sentence might be seen as blaming the victim.

And I find that entirely legitimate at a time when so many residents have had their homes and their dreams reduced to ashes... 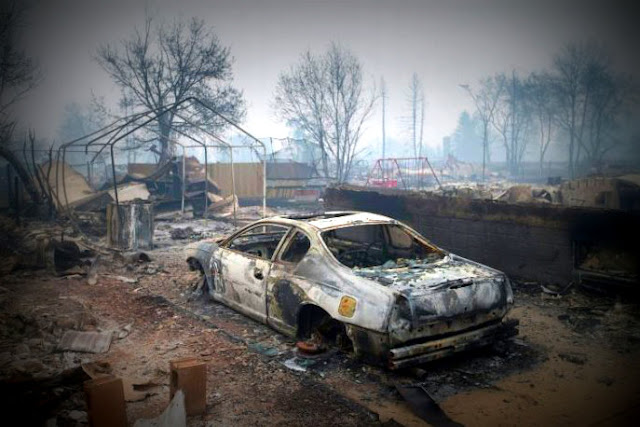 And nobody should inflict more pain upon them in a moment like this one.

But as Walkom also points out, sooner or later, after they have had a chance to recover, we will have to have that discussion.

To say that the inhabitants of Fort McMurray brought this disaster on themselves is dead wrong. But to say that climate change played a role is not.

The Fort McMurray wildfire is not just a freak accident. Neither was the 2013 ice storm that crippled much of Toronto. True, these things can happen without global warming.

But climate change dramatically increases the probability of their occurring.

For with global temperatures rising alarmingly as this nifty GIF demonstrates...


This too is true.

Yes, Canadians are generous. Yes, the people of Fort McMurray are remarkably plucky. Some have gone through experiences that are truly terrifying.

Yes, we should all chip in and help. But what about the future? Is weird weather our destiny?

If not, what are Canadians willing to do to make sure disasters like this one don’t become the norm.

So what should we do?

Comfort the suffering, help them get back on their feet.

Celebrate the heroism of those who managed to beat back The Beast.

But prepare to do more to fight climate change.

For many other beasts are coming... 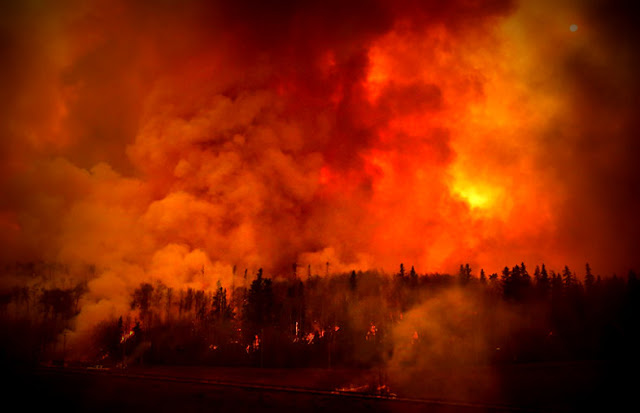 At this time having the "discussion" isn't appropriate, but it will have to be had some time and not in the distant future. First and foremost Fort Mac needs to get back on its feet.

it has been amazing to see all the work the fire fighters have done, how everyone cooperated. its like everyone has been doing what they needed to do at the right time, in the right manner. when it is time, lets hope this cooperation continues as we have "the chat".

The need for oil isn't going away. It is used in all sorts of things, like our cloths, meds, cars, etc. We just need to "talk" about how we proceed with it and what is the best way to do that.

In the meantime, thank you to all the people who are making this work.

This discussion really should be held loudly in certain board rooms of Calgary, Beijing, Houston and Riyadh. The people of Fort MacMurry be better left alone to rebuild their lives in the immediate aftermath.

Hopefully the suits won't bury their heads in the oil sands again, but I suspect they will.

People who think these weather conditions are not a result of climate change must have their heads in the sand...... or work in the dirty, disgusting, tar pits of Northern Alberta, the armpit of Canada. They are Hell bent on turning Alberta into a sewage dump for their own personal GREED. Everyone really, really, really needs these Quads, pickups, boats, snowmobiles, 5th wheels..etc..... This is a result of Alberta GREED and ignorance towards climate change!!!!! Alberta and Newfoundland make good bed partners on this issue. Being a Newfie, I am happy the dirty tar pits are not producing. Less Alberta GREED coming back to destroy our island by the Newfies that worked out there. And a lot less bragging when they come home to visit now. Funny not so much bragging by displaced Alberta Newfies these days.

Reading comments above, I have to say that I agree with most. Undeniable, as you point out Simon, that climate change was a factor in what happened last week. My heart goes out to all of those who have been displaced, pets lost, and surrounding wild life devastated. It is truly heart wrenching. These people will be traumatized for quite some time, and they need support of fellow Canadians. I have met some smug migrant workers over the years who went west for work. Too bad they were not able to work where they wanted. Years lost to chasing tar sand dollars are not easily recaptured.

As time marches along, I believe that the tar sand "dream" will fade. The Beast just accelerated that process. With insurance dollars, infrastructure money, and true grit, Im hoping future Fort Mac will be less destructive to our planet.

As for the suits, perhaps the Panama Papers will seal their fate.

hi e.a.f...yes while we shouldn't beat the people on Fort McMurray on the head when they are suffering, we do need to start the discussion about what we can do to try to prevent climate change from getting even worse, and start making plans for a greener future...

hi Dan...I'm sure it already is being discussed, for even the oil pimps can see the writing the wall. In fact, irony of ironies, I see the Saudis are already making plans for a post oil future...

hi anon...try to be nice, the people of Alberta are just the same as you and me. It's true that all that oil wealth did make some of them lord it over us. But governments and oil companies are the ones who are really to blame...

hi TS... Yes, I'm afraid that the suffering of many people in Fort McMurray is just beginning, and they will need our support for the province was already in bad shape, and this will only make the economic situation worse. But at least many homes were saved, and hopefully it will serve asa warning of what will happen if we don't do enough to fight climate change....

hi David.... don't be a beast. Those poor oil companies are suffering. This is putting a tiny dent in their massive profits. So be a good boy, and send them some dollars... ;)

I agree with your article, but coming from a writer who refers to Alberta as "Klanberta", your concern for the people of that province comes off as disingenuous.