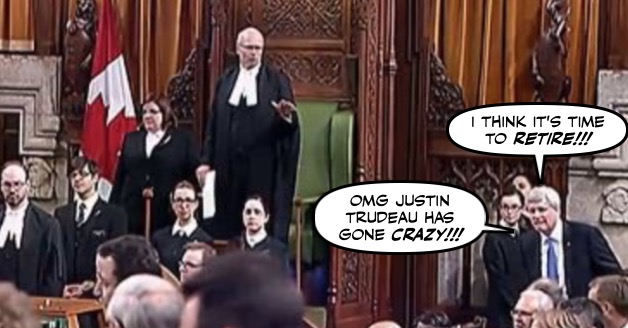 Well I suppose we shouldn't be surprised, after the way he reacted to the elbowgate incident in the House of Commons.

When he looked like he was about to run for the safety of his well worn closet.

But now it seems that Stephen Harper is finally going to retire.

Stephen Harper is slowly closing his Ottawa office as he prepares to step down after serving for over 14 years as a member of Parliament. The former prime minister and Conservative party leader is not expected to return when the House does next fall, already handing out new personal contact information to some as he prepares to launch his next career as an advocate for international causes that dominated his foreign policy while in office.

And despite having disgraced Canada beyond recognition in the eyes of the world, is apparently planning to become a travelling ambassador.

Harper already tested the waters for a role in international affairs when he travelled to Las Vegas in April to speak with the Republican Jewish Coalition on a range of issues including how to unite a fractured party and Middle East causes.

“Thanks all for a great weekend in support of Israel,” read a message from his Twitter account after that meeting.

And it isn't too hard to imagine what that might mean... 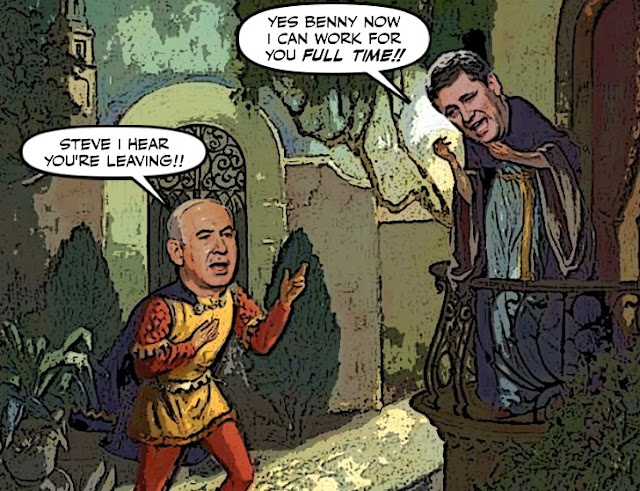 In addition to joining several corporate boards to line his pockets, and continue his long career as a spokesman for Big Oil... 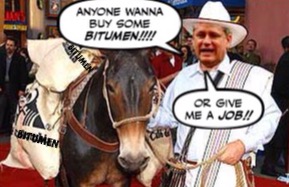 And as Don Martin says it's about time.

If he takes my advice, it’ll be a first for Stephen Harper. But someone has to say it - it’s time for him to go. Tomorrow offers the perfect stage for Canada’s 22nd prime minister to exit political life in front of the one crowd wishing he would stage a comeback.

He has hung on for way too long. And watching the man he said was "just not ready" demolish his legacy must be excruciating. 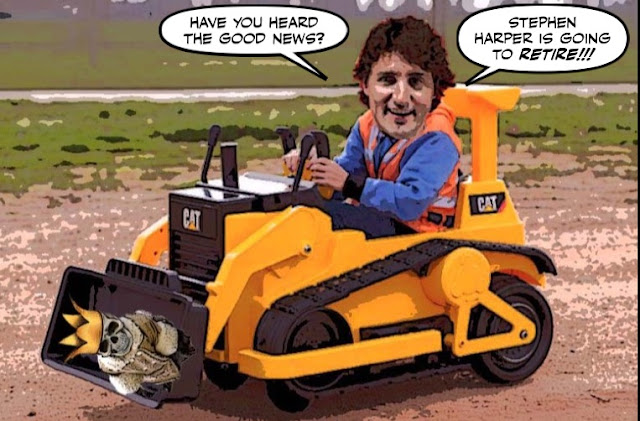 Sneaking in the back Centre Block entrance, struggling to avoid media contact and entering a sleepy hollow office where the only work being done is to reject interview requests, is beneath him.

He has suffered enough.

And while I disagree with the last line, for he could never suffer enough for what he did to this country.

It is time for him to go.

His legacy is a foul one... 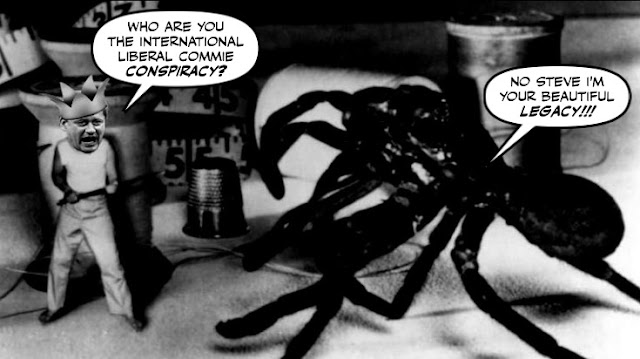 And he will not be missed...

Hopefully he will speak his mind on Thursday evening so Canadians can remember what an idiot he is. I sense some amnesia from the media, but I guess that have their heads up their you know what's trying to drum up some elbow gate hysteria.

Then it will be time for Mulcair to exit as well.

First, full disclosure. I am one of the ‘con’ supporters you love to hate. Just came into your blog via my lib-left daughter (she’s young but she will learn!)
I am a rural Ontario guy, and never felt hard done by Harper and the Conservatives. On the contrary, they helped us a lot here, either with tax breaks or construction jobs that kept our local people employed in the deep of the 2009 recession. Most people here make 12-18 dollars an hour, so those breaks came in handy, when every dollar counts. Contrast that with Trudeau’s ‘middle class’ tax break that helps almost nobody around here.
That you hate Harper, fair enough. But I am surprised you, and all the progressives, had nothing to say about the depredations of the McGuinty/Wynne government. They have created much more misery in our regions than you can imagine. Recall that most homes here don’t have access to natural gas for heat, we use electricity, and the costs of this tripled in the last 10 years. This has thrown many of my neighbours into penury, with no relief in sight. So much for the ‘social justice’ premier!
Now with Trudeau and his merry band, led by the same backroom operatives (hello Gerry Butts), I fear we will now have two governments tag-teaming to kick us while we’re down.
So enjoy life in Toronto, Simon. But go out a bit. Visit the towns with the boarded-up factories and the folks going to food banks. There will be a lot more with the Liberals. Mark my words.
BW

Mindless conbots. Harper has done nothing but pad his own bank account - ZIP for anyone in manufacturing or anywhere else.

Don't believe the load of crap him or his supporters claim about "trickle down economics".

Harper was and is a narcissistic asshole.

The most hated and divisive PM Canada has ever had the misfortune of having.

THOSE CRAZY FEDERAL TORIES! JUST HOW DUMB DO THEY THINK WE ARE? (HINT: PLENTY)
http://albertapolitics.ca/2016/05/crazy-federal-tories-just-dumb-think-hint-plenty/

The Globe’s story, and all the coverage of the same story since, seems not to have mentioned the elephant in the Parliamentary chamber, that is, the simplest explanation of why the humiliated ex-PM was sticking around so long after the Oct. 19, 2015, federal election when he obviously didn’t feel much like it. To wit: He needed to preserve his Parliamentary privilege long enough to avoid being called to testify about the shenanigans in the Prime Minister’s Office back in the days when the boys in short pants were trying to get then-Conservative Sen. Duffy to stop embarrassing the Harper Government.

"Visit the towns with the boarded-up factories and the folks going to food banks". Yeah, it's the result of neo-liberal trade policy. Look it up. It's practiced by most (if not all) western nations and was a cornerstone of what Harper governance was all about. And until we have some sort of revolution in this country it's an ideology that's here to stay. Your "left-lib" daughter is the one on the right course. You on the other hand need to get your head out of your ass.

hi anon...yes Harper was always trying to save us from something, from the safety of his closet. But what we really needed was somebody to save us from him and his brutish regime. Thank goodness we finally got lour act together, and booted them all out of office...

hi TS...from what I hear it sounds like it's going to be a very short and very boring speech. Although I will be listening for more bragging about how he is the "Great Uniter" because from what i hear uniting the right in Alberta and defeating the Notley government are now his singular obsessions....

Hi BW...thank you for your comment. I want you to know I don't hate all conservatives. In fact I consider Joe Clark, who I have met, to be a truly great Canadian. And I also understand that some communities might have benefited from the Harper years. But if you look at the big picture it was Harper's policies that ravaged our industrial base, and left so many factory towns in ruins. While his obsession with Alberta and its oil have led that province to disaster, and dragged us all down to some degree or another. As for the Liberals in Ontario, I have to admit I'm not too impressed with them, and yes I also feel that they have not handled the Hydro question well. But who would you have me vote for? Surely not the Hudak or Brown Cons, or the useless Andrea Horwath. So it's really a choice based on the lesser evil. And I like some of the Liberal's social policies. So we'll have to agree to disagree. But I want the thank you for raising a lib-left daughter. And hopefully she'll learn you... ;)

hi anon...I can't disagree with anything you say. Harper was a disaster for this country on so many levels. His economic policies were a total failure, and have not prepared us well for the many challenges we face. And of course his Great Dictator act, was the foulest thing I have ever seen. And I will always be disappointed that he didn't end up in jail....

I fully support your blog Simon. It's about time that Harper is designated from his padded closet. Once in the USA, he'll likely be thrown out of their country. That man has no safe haven, even in the USA. Especially IF Trump should win, which I am thinking that the majority of Americans especially the younger generation will show him the way out. Perhaps Israel will allow him in.I am not certain that they would as the younger generation are well aware of his stupidity. Irene

Yes he did a lot for Alberta but nothing for the rest of Canada which has a much larger population then Alberta. Governments need to be prepared to service all provinces throughout Canada. Alberta is not any more special then the rest of the provinces. Our current PM JT is doing something about looking after all of Canada.You Albertan's have been brain washed and your not even aware of that.