Is Pollution From The Oil Sands Killing People In Three Provinces? 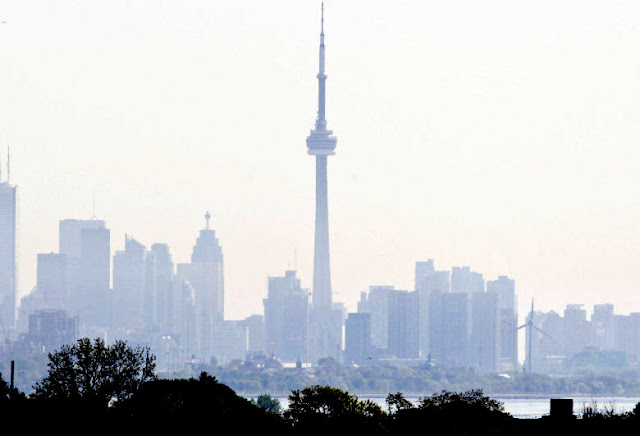 It was thirty three degrees in Toronto today, and as usual when it gets that hot a smoggy haze covered the city.

A blanket of pollution caused by the six million people who live in the Greater Toronto Area, and all their cars.

But did you know that same amount of pollution is put out every day by this much smaller place in Canada? 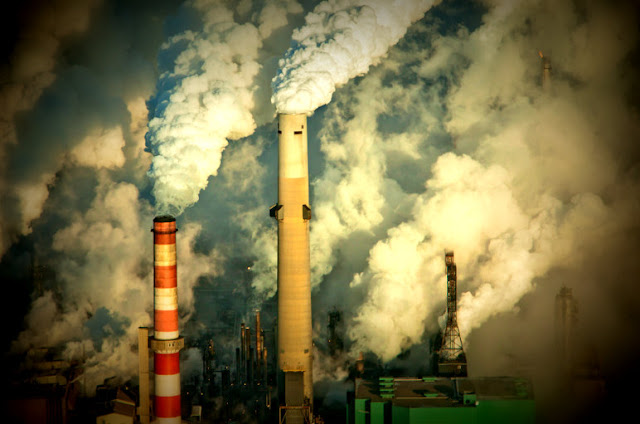 The oil sands of Alberta.

The new study reports Alberta's oilsands generate 45 to 84 tonnes of SOAs a day, comparable to daily output of the Greater Toronto Area, the largest metropolis in Canada — even though the oilsands take up a relatively small area, geographically.

Did you also know that the so-called particulate matter is bad for human health?

According to the World Health Organization, particulate matter is linked to respiratory problems such as asthma, along with increased deaths from cardiovascular disease and lung cancer.

And that it could be poisoning people in three other provinces as well as Alberta.

Once airborne, the pollutants can be blown as far away as Ontario before being deposited in soil and water, although most probably remain in Alberta. The highest concentrations of oilsands SOAs are likely to end up in Edmonton, and the levels from the oilsands may be higher than the levels produced by the city itself, Liggio said.

You know all through the Harper years the Cons tried to confuse the war against climate change with their half hearted attempts to reduce air pollution... 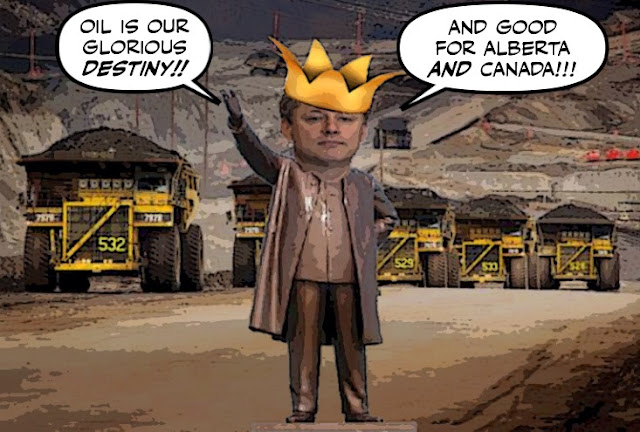 And claimed that they were making progress at least in the war to reduce the latter.

Only to have it revealed today that they were losing both.

And when you think how the oil sands are also contributing to climate change, and you read this story.

Ash and soot from the Fort McMurray wildfire has drifted all the way to Europe and could speed the melting of Greenland's ice sheet, says a fire ecologist.

NASA satellite images, captured earlier this week, show blue streaks — representing dust and soot in the atmosphere — swirling over Spain and the U.K.

You can see where it all comes together, and have to wonder how far those poisons are spreading.

But yes, it is one more big reason to work to make Canada greener.

And one more really good reason to celebrate the downfall of this ghastly leader... 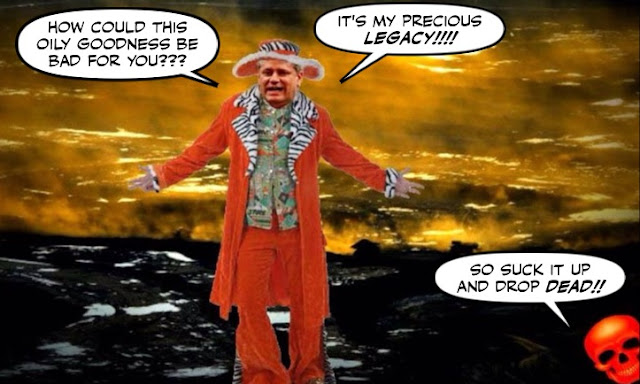 Some legacy, some monster, some grubby oil pimp.

What was that maniac thinking?

And thank goodness we defeated him...

Simon, Trudeau wants us to accept pipelines to the west coast. This is not going to happen. He does not accept the simple fact that those "assets" are now stranded.

hi Kim...I don't think it's as simple as that. Trudeau may have said this or that for he is a politician who needs to hold this country together. But you should judge him on this actions. He was left with a Con-dominated NEB, but by adding another layer of approval, one that involves the consent of aboriginal communities, and a proper environmental review, he has left Trans Canada facing an obstacle that it will almost certainly be unable to overcome. So he can then say sorry Alberta and Saskatchewan I tried but the scientists and the people had the last word. I'm afraid too many people in this country are playing checkers while he is playing chess. So as I said in a previous post, what we can all do is make enough noise as possible in BC, and elsewhere. And that pipeline will not go through...

hi Kathleen...it will indeed, but the way climate change is heading our way like an express train will hopefully change attitudes, and make people understand that money isn't everything. And what good is it being greedy when your house is burning?

Refinery pollution is one of the reasons why they need pipelines and tankers to ship the bitumen to China. Let them poison themselves, while we are comfortable with the twisted rational that it is less toxic than coal.The same rationale has been applied to pollution of the river systems;we are actually cleaning up the rivers by removing all that nasty bitumen that has been leaching into the rivers for thousands of years.Northern Alberta will be a wonderful pristine place to live once the job is complete!
RT

"I'm afraid too many people in this country are playing checkers while he [PM Trudeau] is playing chess." - Very good, Simon. You nailed it!

Half of all emmisons still come from cars, and the Cons laugh at Ontario's efforts to get people electric.

Totally off subject..... Have you heard about all the fracking being allowed in the UK now Simon. Kathleen F. is right..... "Man's GREED will destroy us all"!!!!! FS