Why Bernie Sanders' Campaign Will Not Surrender 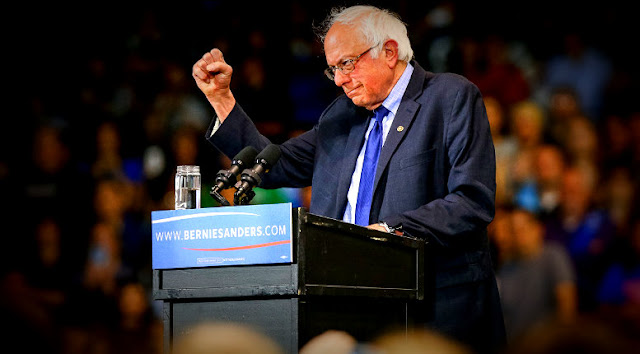 White House dreams fading, Bernie Sanders added another state to his tally against Hillary Clinton with a win in West Virginia on Tuesday — a victory that will do little to slow the former secretary of state's steady march toward the Democratic presidential nomination.

But since most in the MSM have written him off, his victory got little play on the U.S. news networks.

And the dominant message from the corporate media these days seems to be this one. 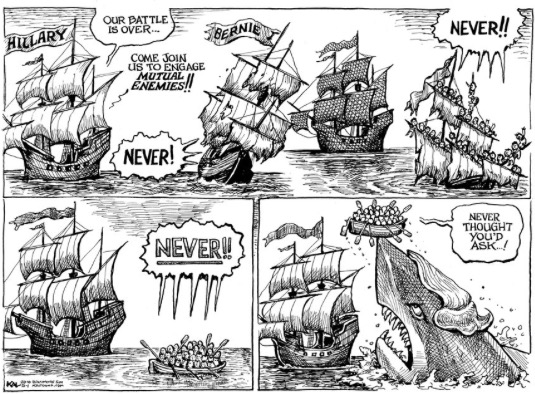 Sanders and his supporters should surrender, board Hillary Clinton's ship, and focus all their fire on Donald Trump.

But while it's true that Sanders' chances of winning the nomination are slim to nonexistent.

That means she could lose all the states left to vote by a landslide and still emerge as the nominee, so long as all her supporters among the party insiders known as superdelegates continue to back her.

This should make the MSM and some of those super delegates wonder at least, who the Trump shark could consume, Bernie or Hillary? 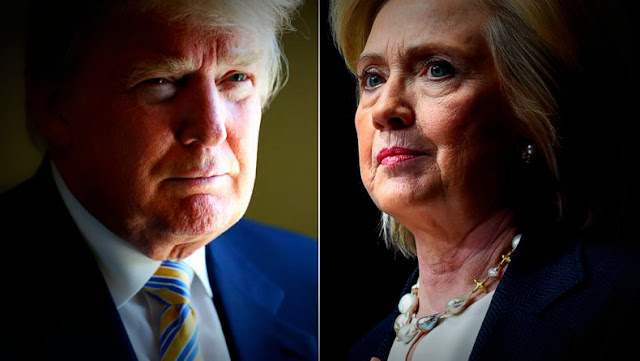 Buckle up for the next six months: Donald Trump and Hillary Clinton are effectively tied in the swing states of Florida, Ohio and Pennsylvania, according to the results of a Quinnipiac University survey released Tuesday.

With voters split along lines of gender, race and age, the presumptive Republican nominee and the likely Democratic nominee appear poised for tight battles in those states, though Democratic candidate Bernie Sanders performs better against Trump than Clinton does and is also seen more favorably by voters in all three states.

No presidential candidate has won an election since 1960 without winning at least two of the three states.

And this should make it only too clear that this is an election like no other.

Preliminary exit polls -- numbers that will be re-weighted as votes start coming in -- suggest that more Democrats who are voting for Bernie Sanders on Tuesday are likely to support Donald Trump in November than Hillary Clinton.

Make it clear that many Americans, especially older white men, would rather support Trump because they believe that he would deliver the real change they crave, and because they really hate Clinton.

So Hillary is going to have to reach out to Sanders and his army of young supporters, because she will need them if she's going to beat Trump.

And they're not about to fade away.

As this line-up to get in to a Sanders' rally in Sacramento the other day makes only too clear.

And also makes clear that what you have been looking at is the future of the Democratic party.

And that while their White House dreams may be fading, their faith in Sanders and the movement he has created remains as strong as ever... 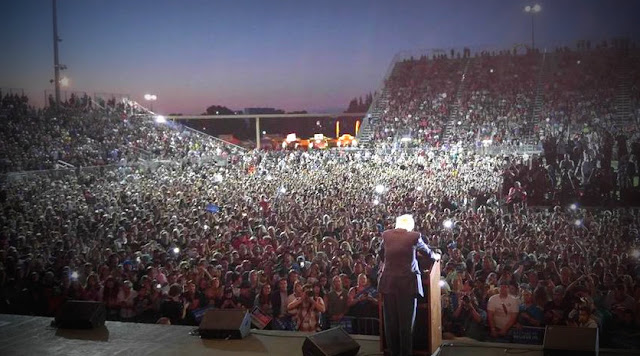 Now as I've mentioned before, I don't believe that young Americans, who are the most progressive generation ever, could ever vote for a bigot or a misogynist like Trump.

Sanders has already said that if or when Clinton is officially the Democratic presidential nominee, he will support her.

And in this video he seems to be gently reminding his supporters who is the real enemy.


The American people understand that bringing people together will always trump dividing us up.https://t.co/zinFvUWYCj
— Bernie Sanders (@BernieSanders) May 10, 2016


But the reason he is staying in the campaign is because he wants to put as much pressure on Clinton to take the Democratic party as far to the left as possible.

And remind her that it isn't just politics as usual.

So if Hillary wants him to encourage his young supporters to vote for her, she is going to have to reach out to him and them, and adjust her platform accordingly.

And above all recognize that while Bernie may never be president.

The political revolution that grand old man started, is only just beginning...

He's carrying on to educate and to rally more youth votes for the democrats and to push Hillary in the right (left) direction and he will tell his supporters to vote for her in the end. Too bad he can't win. Best coverage is on MSNBC.

Nah pretty sure after he loses to Hilary that's it for him. Most of his supporters are gonna hop on the Trump train.

Any progressive revolution will be dead on arrival if Hillary becomes the Democratic Presidential nominee. None of his platform will ever really get implemented under Hillary Clinton. Sanders knows this.

Clinton doesn't run the whole democratic party. Some in the party may be looking towards the future and realizing if they don't want to wind up like the Republicans they will have to engage the people who support Saunders. If the people who support Saunders do not find a place within the Democratic party, they may leave and start their own. The aging baby boomers are dying. Generation X is starting to take over. if political parties ignore Generation X and those who follow, they do it at their own peril.

Clinton will pick up some Republican voters, who can't stomach Trump. It isn't the first time in history we have seen people cross party lines to support a candidate they like.

As we have seen during the Obama Presidency, it doesn't always matter who is President, its who controls the Senate. it would be interesting is Saunders supporters turn their eyes towards that prize, the Senate.

As the song says, Change is goin' to come.

hi anon...yes Bernie is carrying on for that reason, and by doing so he will hopefully be able to push Hillary further to the left, which to some degree he has already done. He has also created a movement, and his supporters are the future of the Democratic party. So the Democratic establishment may win this one, but they won't win the next one...

hi anon...Dream on...most of Sanders' supporters will never vote for Trump. Some of them might not vote, or vote for independent candidates. But most of them will be there in the front lines, helping to destroy your Donald. And I'm looking forward to that one, for it should be a great show....

hi CVsoG...well we shall see, but the more pressure Sanders can put on her the better the chances that something good will come out of it...

hi e.a.f...yes change is definitely coming. The millennials are rising at last, and their political views are strikingly different from those of previous generations. Their world is under threat so they have no choice but to fight for their future...

Totally agreed with CV SoG. It's good Sanders is putting pressure on her, for the sake of educating voters, but it won't do a thing to change her platform long term. Her record is why I think so:

-promoted TPP 45 times, then suddenly came against it late in 2015.
-was against a Colombian trade deal, until Colombian oil money convinced her to support it.
-voted in 2001 to make it harder for Americans to wipe out their debts through bankruptcy.
-will not release the transcripts of her speeches to Wall Street, showing her untrustworthiness and the strong indication that releasing them would damage her campaign.
-has been lying and using weasel words to cover up her gross incompetence in the email server scandal. Her actions show her disrespect for rules, her country's security, and her citizens' safety.
-has been cheating - or silently condoning cheating - through the primaries (NY and AZ being the worst examples), leading to the coup her surrogates performed in Nevada. Disgrace to democracy. The videos are all over YouTube, reddit, and Twitter, showing NO violence or chair throwing. It's a casino with cameras everywhere, and tens of people live streaming with their phones - if there were violence, there would be proof. MSM has been reporting these things as fact, including MSNBC. This last episode in Nevada convinced me that Hillary is more dangerous to democracy than Drumpf. I'm using that name to remind people that I'm aware he'll be dangerously incompetent.

This is why Hillary cannot be trusted to keep her word and why her actions will be to consistently take in big money and support laws that harm average people. After I started watching U.S. politics, it alarmed me that there was only one decent candidate with long odds, Sanders, and that everyone else was a dangerous psychopath. I don't use the word psychopath lightly - look up Hillary and "we came, we saw, he died," or Berta Cacerces, or the 12 year old Arkansas rape victim. Bernie's the best candidate for the U.S. and the world and I'm trying to support him however I can. I would also like people to understand that if Drumpf ends up winning, there will be a good reason: Hillary and her supporters were determined to ignore the warning signs.