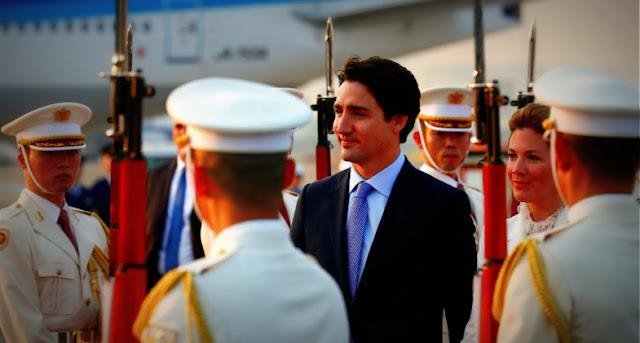 I don't know how Justin Trudeau does it. Less than two days ago he was in Japan attending the G7 summit.

But there he was in Winnipeg yesterday, putting his leadership on the line.

Addressing the faithful at the Liberal convention. 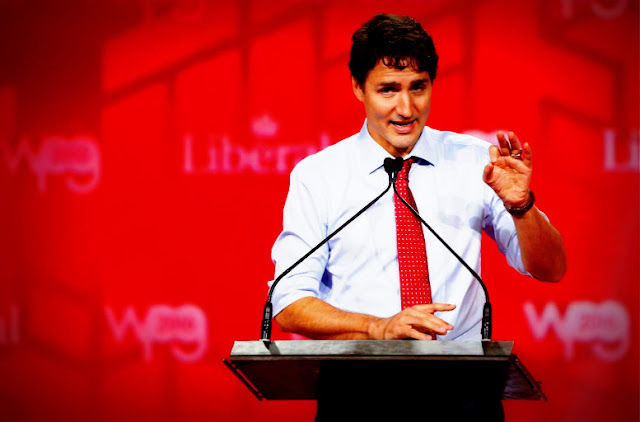 By changing the Liberal constitution to try to turn the party into a political movement,

Reflecting on last fall's electoral victory, Prime Minister Justin Trudeau told a hall full of happy partisans in Winnipeg on Saturday that "we're here because we reconnected to Canadians."

In hopes of further expanding their reach, he appealed to delegates to adopt a new party constitution that would eliminate the fee required to join the Liberal Party. And that appeal was resoundingly endorsed.

Under the provisions of the new constitution anyone willing to register for free as a Liberal will be allowed to vote in nomination and leadership contests, attend conventions and take part in policy development.

Because nobody should underestimate the possible impact of that move. And although some traditionalists are moaning and groaning,Trudeau is right.

"We have grown into a confident, mature, open movement — united and focused on what matters to Canadians and to our future," he said. "But the party constitution we have today is a product of the era we worked so hard, together, to put behind us. The era of factional battles and hyphenated Liberals. Of regional chieftains and behind-the-scenes power-brokers. Of the closed, insular thinking that almost killed this party. That is the constitution we need to replace."

The era of the traditional party is over, and is being replaced by the rise of political movements.

Like the one Bernie Sanders has been building in the United States... 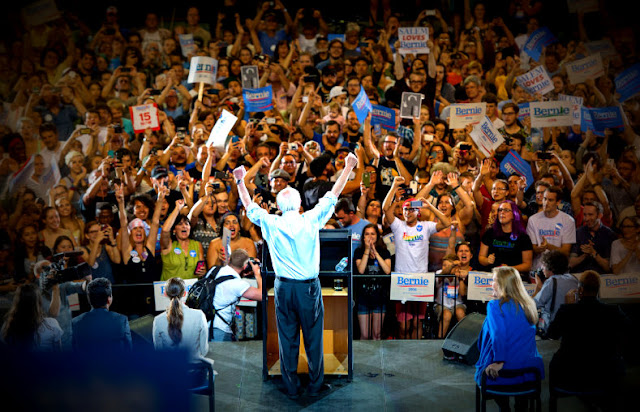 For only a progressive movement can attract the support of the rising millennial generation, and only a movement can effect real change.

And of course if Trudeau is successful in attracting more young voters, like the ones who helped him win the last election. As well as other voters who are looking for real change.

He should just about finish off the NDP... 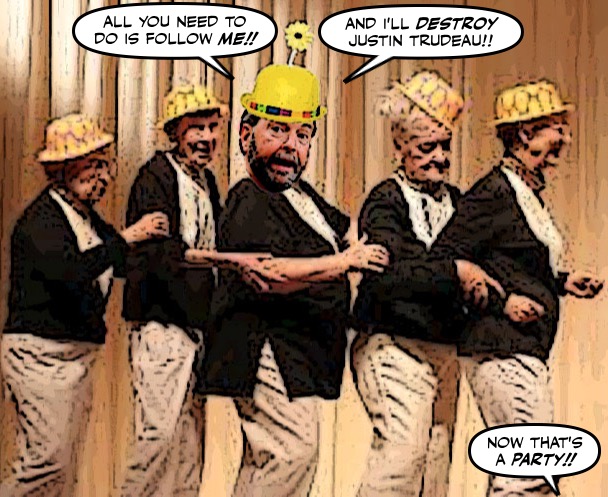 Who like their leader, and the Cons, remain stuck in the past.

Thee last time the Liberals opened their doors, they gained 300,000 new followers. Imagine how many more they could gain before the next election.

And how a popular young leader like Trudeau might be able to use a movement like that one, to win one election after the other. Even if the Cons sabotage plans for electoral reform.

Of course, I didn't like EVERYTHING Justin had to say at the Liberal convention. Like the bit about Stephen Harper and his Cons:

"We need to remember that even though they may be our opponents, they're not our enemies. They're our neighbours and our friends,'' he said.

"Even if you weren't a fan of his politics, there can be no doubting Stephen Harper's commitment to our country," he said. "I ask you to join me in thanking him for his many years of public service."

For after the way Harper went after him... 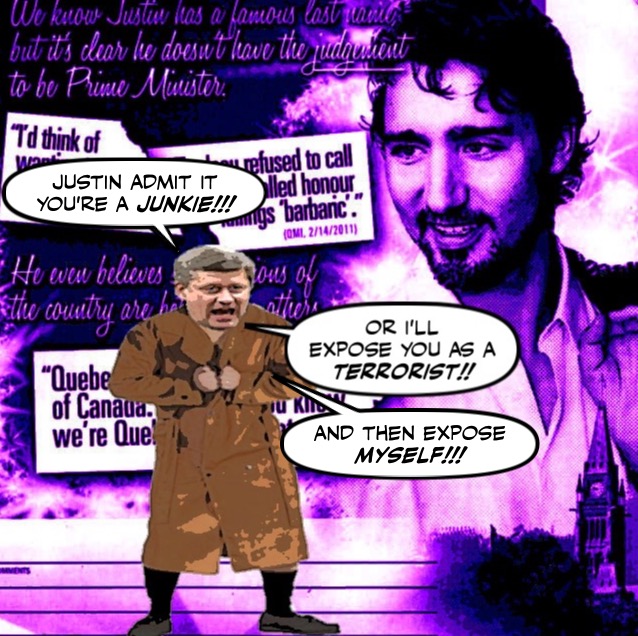 And after what that depraved political pervert did to our country.

My reaction to those generous words was similar to Bob Rae's reaction. 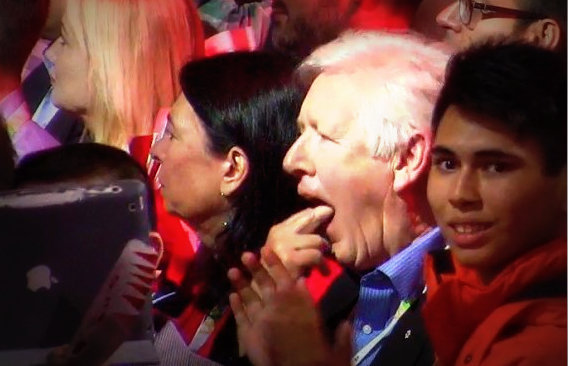 Because although Justin has the ability to disarm his opponents, with his natural and very Canadian decency. And nobody can argue with success.

The truth is Stephen Harper WAS a monster who deserves no tribute whatsoever, just the everlasting contempt of Canadians.

And the Cons are not our friends they're our mortal enemies... Rona Ambrose and her Cons are just as depraved and disgusting as the Harper Cons.

And if we don't destroy them first, they could still destroy him, and our country.

But then I'm sure that new movement is intended to do just that.

And leading his party to where no party has gone before... 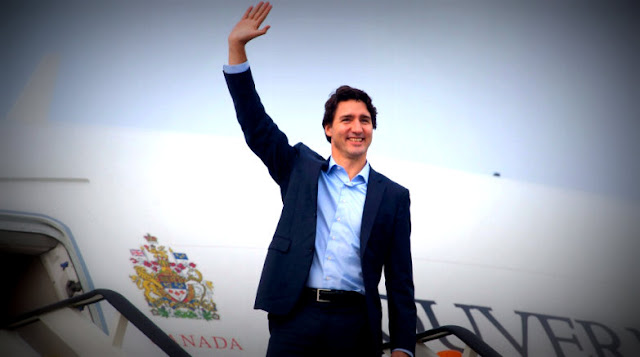 Please do not delete all your 'Harper Cartoons'. I have a feeling that there will in the future to remind Canadians just how contemptible his government was.

"Even if you weren't a fan of his politics, there can be no doubting Stephen Harper's commitment to our country," Prime Minister Justin Trudeau said.

I'll have to disagree with JT here. I've come to believe that Harper's main goal is to take The West out of Confederation. As time goes on the evidence continues to support and confirm that conclusion.

Glad to see ur blog still there after many years and now finally there is another president. Do u remember me;)

How would the Liberal Party "just about finish off the NDP"? By using Harper's Bill C-51 to imprison dissenters to the Liberal/Conservative pro-corporate, anti-worker "free trade" agenda? Where is the "real change" from Harper's capitalist, elitist worldview? What does the Liberal Party even stand for?

Never thought I'd hear/see myself saying this...

Seriously though, while regarding Harper I agree with Rae, and of course you as well Simon (I know, what a shock, amirite), Trudeau's view of politics and the way to rebuild a stronger Liberal brand precludes his taking the view/approach you and I both believe is the better one, and the more accurate one where Harper and the current CPC is concerned. I will admit I find it a bit frustrating to have to sit through, when I want to see Harper's true essence displayed in bold, vivid, and excruciating detail for all eternity as a warning lesson to Canadians as what to be on guard against in the future. Still though, the old cliche about the best revenge is living well has some truth to it, and if in the end Harper's tenure enables a Justin Trudeau revival of the Liberal brand well into the future as the only way to govern, and to follow at least in general the principles that said Liberal brand encompasses as the only way for other parties to become government and/or hang onto it once there, that would not be inconsequential, and a lovely irony on Harper.

So long as the historians and the serious political writers don't whitewash the Harperium I will be reasonably content, and able to take Trudeau's approach in stride. That said, I for one, like I know you too, will never allow the Harperium to be forgotten nor why it should not be forgot. Of what Harper tried to do and came far too close to managing with his abuses of power. This will remain a part of my political identity and DNA until. the day I die. Some things deserve the Quebec motto of I Remember, and this is clearly one of them!

Aside from that, it was an interesting speech, and Trudeau is showing possibly some very strong long term thinking here. It will be very interesting to continue watching.

Hi Bill...I realize that when I suggest that Trudeau is making a smart move some people will roll their eyes, because they have been conditioned to think by the Cons and the Con media to think he is dumb. But in fact at several points in his still short political career he has made some very smart moves. Like deciding to open up the Liberal Party which gained him hundreds of thousands of new followers. His decision to fight the trend to austerity and argue in favour of deficits was also risky but also turned out to be a smart move which set him apart from Harper and Mulcair. And I believe turning a party into a movement will also pay off handsomely, and once again set him apart from his opponents, who will either have to try to do the same thing or be left in the dust of history. And don't worry I will not delete all my Harper cartoons, and will keep working on new ones of the current gang....

Hi anon...well look I think Justin was just being polite, and I don't doubt that he private view of Harper is not too flattering. But yes, it will be interesting to see what role Harper plays in trying to unite the right in Alberta. For from what I hear it is now his main obsession. The federal Cons are thinking of creating a provincial wing, and should Harper assume and kind of leadership role like you I don't doubt that he will fan the flames of western alienation, and could very well create a major national unity problem....

Hi Richard....I'm afraid I don't remember you. But then ten years of fighting the Harper dictatorship, and too many late nights, have probably cost me a lot of neurons. But welcome back anyway.... :)

I would love to live to see the day when a visiting head of state isn't greeted at an airport by a select group of stern looking trained killers with fixed bayonets. Won't happen though.

Hi anon....all political observers who attended the Liberal convention have noted that they have never seen a younger crowd. Polls have shown that the NDP, has lost many young and not so young supporters to the Liberals. And since a movement will almost certainly allow Justin, or force him, to move the party further to the left, you can see the writing on the wall. And if you can't see the difference between Trudeau and Harper you are either blinded by your own rigid outdated ideology or you are fooling yourself....

Hi Scotian....I should have made it clear that although I disagree with Trudeau's generous words, they were the right words for a prime minster to say. Remember, according to the polls quite a few Con supporters think Justin is doing a good job, So by appearing to be generous he can also sweep them up up into his growing tent. As I said in my post Justin has good political instincts, and is definitely not as dumb as he has been portrayed. And of course people like you and I will continue to remind Canadians what a rotten leader Stephen Harper was, and hopefully help undermine any efforts to rehabilitate his image....

Those comics would make a very good book. They saved my sanity many times and I would buy a couple.
I thought it was very gracious of Justin to thank the Con Scum as they continued with their low blows against him and his family. He continues to amaze us and it's killing them. I hope they don't come back to BC anytime soon. They brought Thunder and Lightening with them and the weather was horrible the whole time they were here. I'm happy that they didn't get to enjoy our usually beautiful weather. Even Mother Nature hates them. Sunny Ways Simon, now that they've left! Pamela.

Why do you assume that Trudeau and the Liberal Party elites would want to move their party to the left? On economics, trade and taxation, the Liberals and Conservatives are almost indistinguishable.

hi Pamela...I'm really glad to hear that the gods rained on their parade. It must have been absolutely horrible to have so many Cons in town. But yes, all kidding aside, it was great to see that Justin can be so classy despite what those Cons have said about him. It does make him look good, and makes the Cons look like the scum they are...