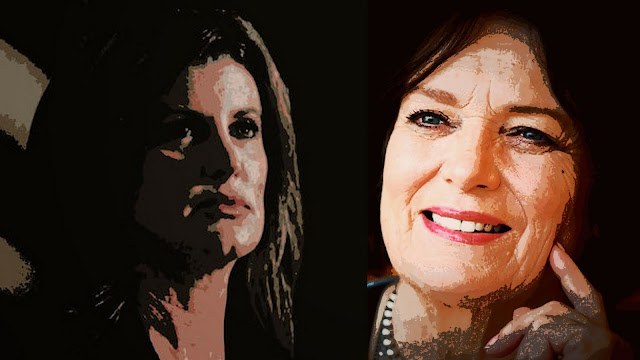 I don't know how much lower Rona Ambrose and her monstrous Cons can sink, when they are already wallowing in their own excrement at the bottom of the pit of depravity.

But just in the last few days they have managed to crush the dreams of the dying Liberal MP Mauril Belanger.

And now they're going after his mother. 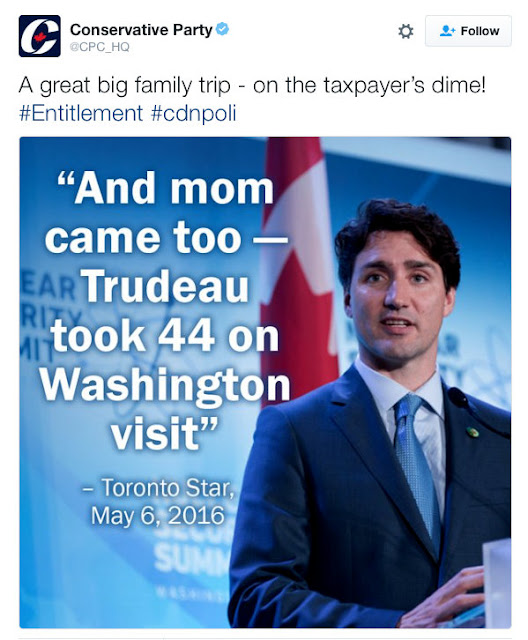 And demanding that Justin explain why the gentle Margaret went with him to Washington.

"It was the president himself who personally invited my mother and my in-laws," Trudeau said in French during a press conference Monday.

Or making loud grunting noises about the size of his entourage.

The Conservative opposition jumped on the trip's price tag in question period Monday, asking why the prime minister needed to travel with a "massive, celebrity-sized entourage."

When the attack on Margaret couldn't be tackier or uglier.

And criticizing the number of people who went with him couldn't be more hypocritical.

When there was never a larger entourage than the one that accompanied Stephen Harper on his junket to Israel. 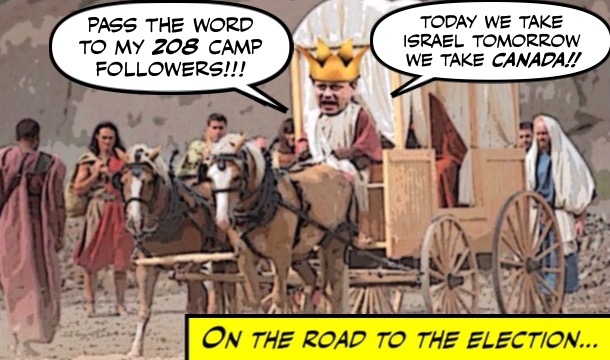 The list of delegates accompanying Harper and members of his cabinet includes 21 rabbis from across Canada, as well as representatives from B’nai Birth Canada, Friends of Simon Wiesenthal Center, local Jewish community groups, the World Jewish Congress and Centre for Israel & Jewish Affairs.

There are also representatives from Crossroads Christian Communications, Trinity Bible Church and the Fellowship of Evangelical Baptist Churches in Canada. Andrew Bennett, Canada’s Ambassador for Religious Freedom is also a part of the accompanying party.

For who can forget the 208 lumbering across the promised land? Or the way Harper turned the trip into one giant photo-op designed to win the Jewish vote.

Or the number of Con monkeys he took with him... 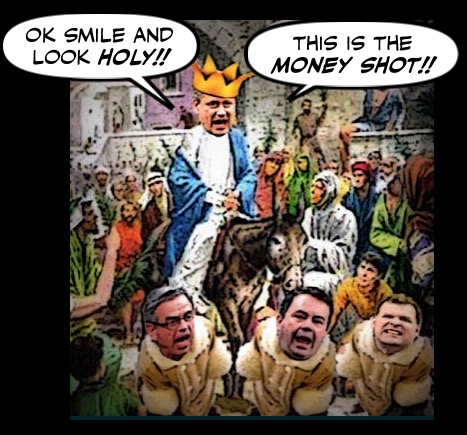 Or the way the Con MP Mark Adler begged like a doggie for his "million dollar shot."

And made it only too clear why they were all there.

But then they are Cons, they are low creatures with no moral compass. They are foul bullies and  more beast than human.

They must think that they can hurt Justin... 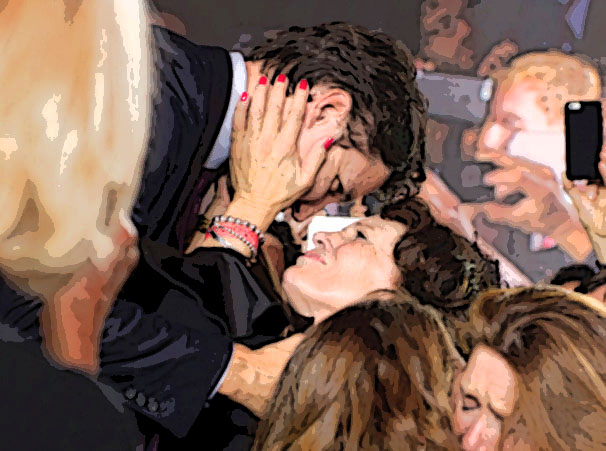 By attacking the mother he loves.

And destroy them soon enough...

Harper had told the media and had ordered his theo-con peons to claim that their religious beliefs had nothing to do with their political beliefs. Meanwhile he puts a young earth creationist in charge of his science portfolio. The only question I have, Simon, is why this counter productive, mean spirited ideology, and obvisiously christian biased mandate, was never properly vetted or exposed by the main stream media?

The Con clowns have nothing positive to contribute to Canadian politics.Its still all about identity politics designed to bond with those that already have an irrationally negative opinion of Trudeau.Their view is that political affiliation is like a faith.They provide enough nonsensical dribble to keep the converted in line and have other funded squads on the prowl for those that could be susceptible to conversion.Its a total waste of taxpayer money but will not change until the electorate becomes more informed on the issues rather than faith. Possibly an online forum where Canadians could provide input/vote on major issues ( even if its non binding)would bring our politics out of the dark ages.
RT

Pop Quiz!!!
Which is larger?
44 or 208?
If you're a fucking loser piece of shit CON then of course you'll say 44.
You just can't make this shit up, folks...
ambrose...the biggest loser of them all (sans heil harper, of course).

Yes, that is really low. Actually, I don't think the Cons were attacking the Grégoire-Trudeau children, but didn't make a comment there because I thought their attacks were baseless, petty and hypocritical. It seems obvious that placing the children in a public daycare would be a security nightmare...

Margaret has been through a lot, and seems to be enjoying her life as a gran now.

I think Rawna should read Maggie's book. The liberals should do more for mental health issues, then maybe Rawna may get the help she needs!!!!!!! Maggie is far above Rawna when it comes to morals and ethics!!!!!

It must real eat the Cons' livers that Trudeau was given a state dinner; Steve never measured up to this honor.

Trudeau took 44 on a short hop to Washington, D.C. Harper took a couple of hundred and how many all the way to Israel, some of whom served no useful purpose those than to garner votes for the Cons.

As I understand it Obama invited the "whole family". Lets not forget Trudeau's Mother has her own "fame". Inviting her back to Washington, D.C. is not beyond the pale of things. this isn't her first rodeo. Inviting the children, well the Trudeaus are a young family and when the Obama's went to Washington, they too were a young family. Oh, and Obama moved his mother-in-law into the White House. Both of the Obamas have been clear they have been able to pursue their careers because of Mrs. Obama's mother. Having the grandmothers present,(and one grandfather sends a message. It takes a village or a whole family to raise children. Inviting the Trudeau children's Grandparents sends a message: Grandparents are important and need to be included in things. Margaret Sinclair Trudeau has much to offer her son, his family, and the world. I have no difficulty with travelling with the family at taxpayer expense. makes a whole lot more sense then Harper taking I don't know how many rabbis.

There is also the matter of Obama being the First African American President. it is his last term. Having the entire Trudeau family and in-laws present is a moment in history. We may not see another President of colour in the U.S.A. for several generations. It is most likely why the Royal family had the future heir at age 2 meet the first African American President. it is a moment in history. the whole Obama family went. Now the First African American First Family have met the present Queen and then next 3 generations of the Royal Family. its about history and all their places in it.

It was no different having the "entire extended Trudeau" family in Washington, D.C.

The pettiness and desperation rears its ugly head once again. Leave it to these clowns to criticize PMJT's trip to Washington after Harper's abuse of taxpayers money on his partisan pilgrimage to Israel. Let's not forget the Ukrainian vote garnering scheme with their many trips there because, you know, Steve was such a champion of the oppressed.
I am so glad these vile hypocrites will not be running this country for a long, long time.
JD

hi GreazedLitenen...that is a questions historians will be asking themselves long after we are gone. My most charitable theory is that the MSM had never seen anything like Harper before, and like a body that does not recognize a virus, was unable to properly react before it was too late. But that's the charitable view, and the other is that the MSM danced to the tune of their corporate bosses, and sold us all out to a maniac...

hi RT...you know I don't mind legitimate criticism of Trudeau, for nobody is perfect, and that is the role of the opposition. But the Trudeau hate that pours out of those Cons is like syphilis, and absolutely disgusting. The same thing happened with Obama and he had to spend half his mandate fighting charges he wasn't born in the U.S. and was a secret Muslim. It's the same thing with Justin. The Cons are trying to destroy him by
whatever means necessary. And we need to give them a dose of their own medicine....

hi lagatta...yes it is cheap and cowardly. As was going after the child care arrangements. But the Cons have always and still do mock Margaret even though she is a wonderfully warm human being, who has turned her own suffering into message of hope for others. There is noting I despise more than bullies, and those filthy Cons are the worst I've ever seen....

hi anon...I'm hopeful that Margaret will be able to influence her son into doing more to help the mentally ill in this country. She's doing her part, and he who do his, because it is a huge problem, and the mentally ill aren't receiving the care they need and deserve...

hi anon....yes, Levant senior was on that absurd junket, for who knows what reason, and I suppose we should be grateful that his disgusting son wasn't invited as well. And yes you're right, it must really bother them that Obama invited Trudeau and his family to a state dinner at the White House, while Steve got nothing...

hi e.a.f...yes, I think that Obama enjoys Justin's company, after having to deal with the weird Harper freak for so many years. And taking 44 people, many of whom paid their own way, to meet the leader of our neighbour and biggest trading partner seems to me to be entirely reasonable. Unlike that massive junket to Israel whose trade with this country pales into insignificance, and was just one long photo-op to try to win the votes of the Jewish community in Canada...

hi JD...yes it is pettiness and desperation. They've thrown everything but the kitchen sink at Trudeau, and nothing is working. He is in fact even more popular that they day he defeated them. While the filthy Cons are going absolutely nowhere, and as you say, thank goodness they won't be running this country for a long long time...

Happy Mothers Day from the CPC?

Isn't Levant's father a rabbi? All rabbis should be asked who is being described in these Jewish scriptures: