John Oliver On Why Elbowgate Isn't a Real Scandal 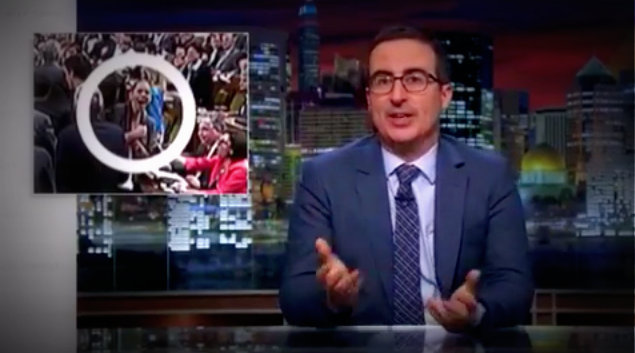 I think that most sensible Canadians understand that elbowgate isn't a real scandal.

No matter how loudly Ruth Ellen Brosseau screamed, or tried to look as if she had been shot.

And that by trying to make a huge deal out of it the opposition is just looking ridiculous.

So I'm glad to see that John Oliver also believes the same thing.

Best line for me:

I guess that's a brawl by Canadian standards. Although in New York, to be honest, we just call that shopping at Trader Joe's.

As we all know the Americans like to make fun of us for saying "sorry" at the drop of a hat or a tuque.

But I'm kind of proud of that because it is who we are, and it does show that most of us (with the exception of Con scum) have better manners than most of them.

But Oliver is right, enough is ENOUGH.

Oh, for f*ck's sake. Enough! Enough! There may be no clearer difference than the United States and Canada than the fact that in the U.S., presidential candidates write books called No Apology while in Canada, Trudeau may be expected to spend the remainder of his term in office apologizing for the existence of his arm wherever he goes.

Now let's just hope that the Cons and the NDP get the message,

And stop making absolute jackasses out of themselves...

So much for supporting the victims.

The misogyny is strong in this one.

How DARE you belittle the rape of Ruth.

I wonder how John Oliver feels about the UK leaving the EU. I don't know the guy, has never seen any of shows, only know him cuz of his popular video on Trump but I'm guessing he wants them to stay in the EU because it's "current year".

I must confess that I find this more compelling than your assessment.

John Oliver is brilliant and funny. Saw the clip on the CTV news this evening. Very funny. He is so very correct.

poor, poor, little battered NDP M.P. Yes, she ought to go to Trader Vics or the floor of any rock concert. Now let them all get back to work.

Anon
You really seem to need professional help. You used to have a tenuous grasp of reality but it appears to have slipped.

I do enjoy John Oliver. He tends to put a lot of things in context but with great humour.

Ohn and you're right. The Trader Joe comment is priceless

One of my favourite parts is where he says that if Britain and the US had a baby and abandoned it in the snow it would be Canada.

hi anon...what victims? Trudeau has apologized about twenty times for his behaviour, while the NDP who started the whole thing by preventing the Con whip from returning to his seat, have not. And what's even more disgusting have also not apologized for trying to turn the issue into a case of gender violence. Which as many feminists have pointed out makes a mockery out of the real violence against women. So who are the real misogynists?

hi anon...I don't know much about Oliver, and have only seen a few of his videos. And while I don't always agree with him, on this occasion I thought he hit the nail on the head...

hi anon...I'm not on Facebook so I can't read read it. But I am on Twitter and I have never trolled anyone. So either send me a summary, or better still don't bother...

hi e.a.f...I'm glad CTV ran the clip, because I do think it puts things into perspective. There has been a lot of hot air but it is a tempest in a tea pot...

hi jrkrideau...Somebody once said that Canada is so big you have to leave the country to write about it. And I think that Oliver provided some badly needed perspective. As for Trader Joe I've never heard of that place, but I have made a mental note to avoid it... ;)

hi UU4077...yes that was a good one too. Although I would have to point out to him, that when I look at the state of Britain and the U.S, for an abandoned baby we did pretty good...

yes, by being abandoned as a baby, we avoided the toxic dump parents.

Thank you Simon... for your statement on elbogate. It was a set up between Mulcair and Ruth Brasseau. Mulcair is a sore spot for the NDP. They definitely need to be looking for a new leader. Irene