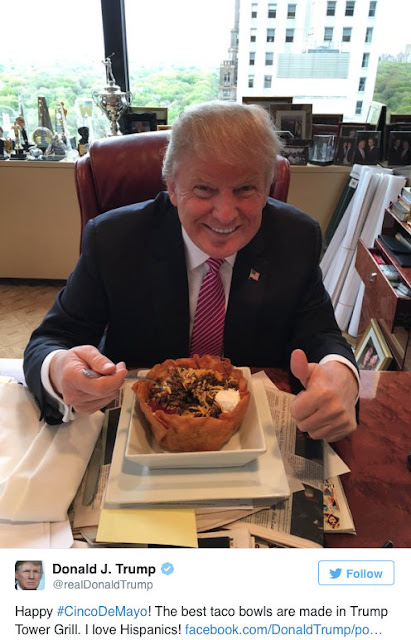 It was the perfect example of why Donald Trump is almost certainly going to lose the Presidential election.

For there he was yesterday, trying to reach out to Hispanics who he has insulted, threatened to deport and build a wall to keep out.

Celebrating a Mexican holiday, by posing with a giant taco bowl. Promoting the Trump Tower Grill.

And declaring "I love Hispanics!!!!!"

Only to have the tacky taco stunt backfire almost immediately.

When a closer look revealed that the ghastly looking taco bowl was resting on a picture of one of his former wives... 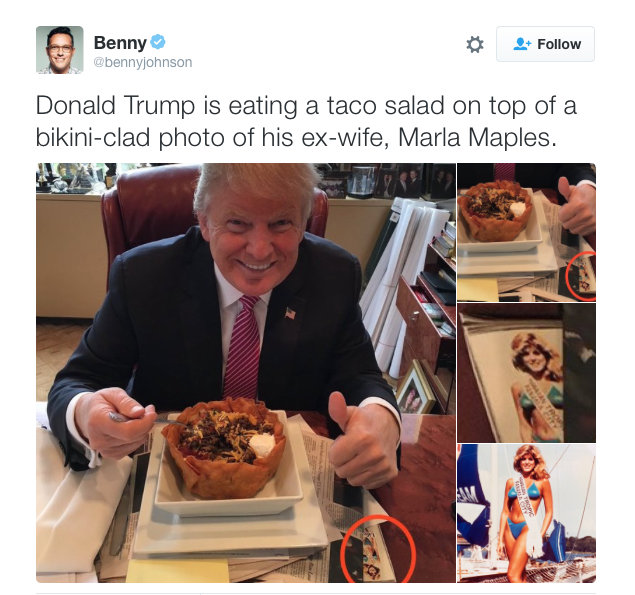 And his claim that the Trump Tower Grill's taco bowls are "the best" turned out to be practically fraudulent.

For one, it does not seem like the Trump Tower Grill actually serves taco bowls. But the Trump Café is offering them today — as "taco fiesta." We can assume that's what he meant.

They're not normally on the menu, and they taste awful.

On the same pass I also ordered "beef tacos" ($13.50) which turned out to be a fried tortilla bowl heaped with romaine lettuce, grated yellow cheese, and plain ground beef that was so devoid of flavor, it rendered an insult to Mexicans every bit as profound as Trump’s previous pronouncements. Trump food is bland food. Except what Hillary Clinton is already tweeting to the 55 million Hispanics in the United States. That nations's largest ethnic minority. 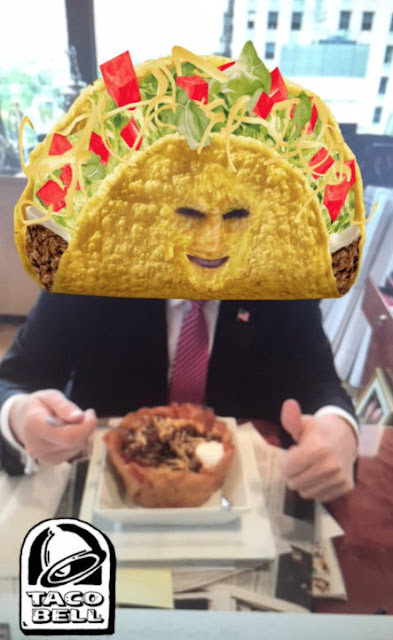 He is just a bad joke.

And when election day finally arrives will almost certainly get what he deserves... 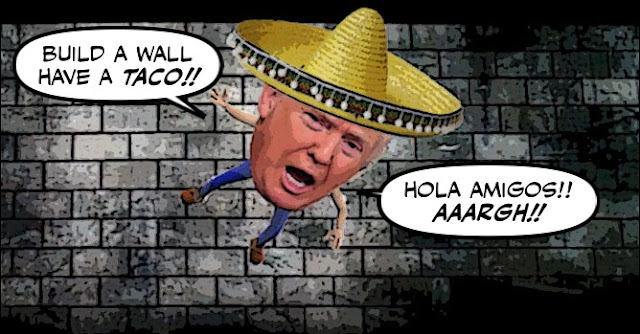 Nothing that man says surprises me.

I also won't be surprised if he makes president.

Not many thought he'd make it this far, but he has. there is no limit to the lack of sense some Americans have or the amount of racism which exsists in the U.S.A. It was very interesting to watch the Rob Reiner interview. He called it right.

The only support this clown will get are from the deluded rednecks, the opportunists, the intolerants and the racists. Surely to God there aren't enough of them to win it.
The voters who actually see Trump for what he is cant become complacent, they have to get out the vote, much like we did here to defeat Harper.
JD

I highly doubt the millions who voted for him in Ny Nj Pa Ma etc are "rednecks" and yes... Millions

I would suggest that Trump put the fork down. The guy has such offensive views on how women should behave and look. Well Donald, you look and act like a pig! Put the fork down already!!

As for Trump, even Bernie Saunders losing received more votes in the Dems NY primary than Trump did in the GOPs NY primary.

Trump's base is strong in the GOP primaries, but he's going to run into trouble trying to gain a wider base of voters outside of it.