The Shameless Cons and the Phony Deficit Bomb 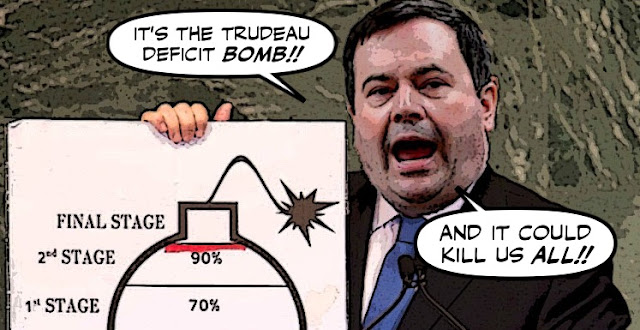 As you know Jason Kenney is preparing to launch his campaign to try to become the new leader of the Cons.

And he is taking a page out of his beloved Benjamin Netanyahu's play book. By trying to scare us into believing that Justin Trudeau's new budget is a deficit BOMB.

And that only he, a REAL economist, and a crazed religious fanatic, can save us, or as he trumpets "Protect Canada's Future."

But then I suppose he has no choice, because the leadership rival he fears the most, the Con clown Kevin O'Leary, is also trying to scare people into voting for HIM !!! 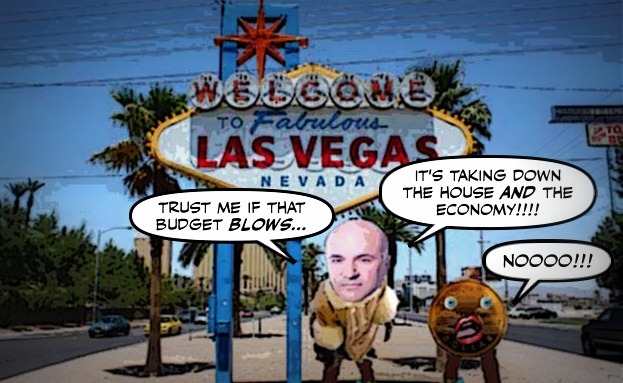 Claiming the budget is a ticking time bomb or a Las Vegas crap shoot.

I have seen this behavior before in another place. Las Vegas. Who hasn’t heard of the gambler who goes bankrupt doubling down and trying to dig themselves out of an initial loss? The 2016 federal budget is teeming with the same kind of risk.


Governments make mistakes all the time and we usually recover. But this budget has to be the most dangerous in modern times. Why? The sheer size of the deficit coupled with no sound reason for it.

And suggesting that he's a real economist, and knows what he's doing.

Even though his record argues otherwise.

While back at Con headquarters, they are also using the idea of a deficit bomb... 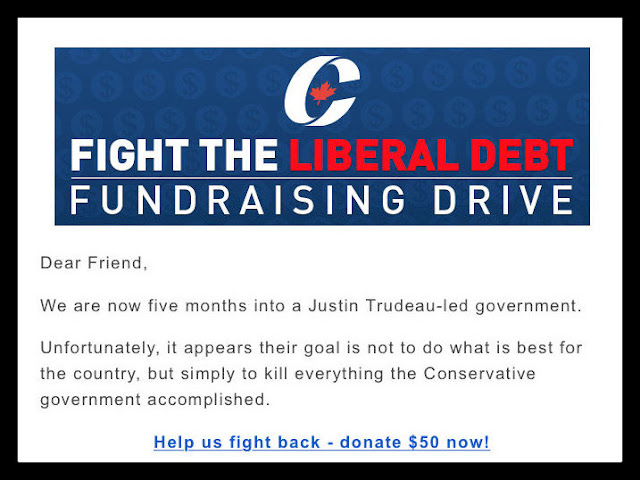 To frantically beg for money, so they can pay off THEIR huge debts.

When in fact, the projected Liberal deficit is small compared to others in the past. 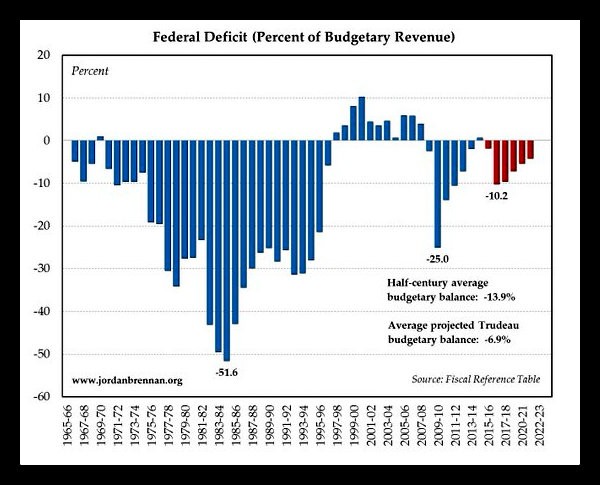 Government spending is down to its lowest level since the end of the Second World War. 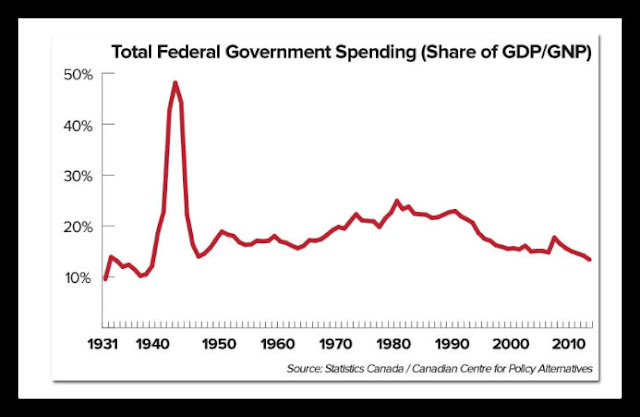 Thanks to the Con regime's attempts to slowly strangle government or render it useless.

And as William Thorsell points out, it is much ado about nothing.

A preponderance of columnists and pundits commenting on the 2016 federal budget warned sternly against deficits and rising debt over the next four years. The papers were filled with slippery slopes, debt bombs and predictions of program cuts and rising taxes ahead: there was much disapproving clucking in the commentariat.

The Con media should take a valium, understand that times change, and that sometimes running a deficit can be a smart move.

You can judge the significance of deficits and debt only in context. Absolute numbers don’t matter, and living in the red can be smart sometimes.

In 1990-91, for every dollar Ottawa received in revenue, it spent 36 cents on debt interest payments — reflecting years of terrible fiscal management. This year, for every dollar of federal revenue, interest is just 8 cents, and this ratio will stay about the same for the next four years.

The federal government now has reasonable debt levels in relation to national income, which Liberal budgets over the next four years will not significantly change. In fact, this year’s $29.5-billion budget is based on very low economic growth forecasts, and contains $6-billion in contingency funds as a buffer against a bad surprise — which portends a good surprise.

The wringing of journalistic hands in this context suggests habit rather than dirt under the fingernails.

So now that we know that it's a relatively small deficit, that will almost certainly shrink quickly.

It's disappointing to see a CBC show, even if it is a comedy show, suggest that it's really massive.

Which only plays into the phony message of the Cons.

Which is appalling, although hardly surprising.

When ARE the Liberals going to clean up that place?

As the deficit shrinks, or turns from a bomb into a bunny, the Cons who are trying to use it to scare Canadians are going to look ridiculous.

Look like the same old Cons, who are always inventing threats, or crying wolf... 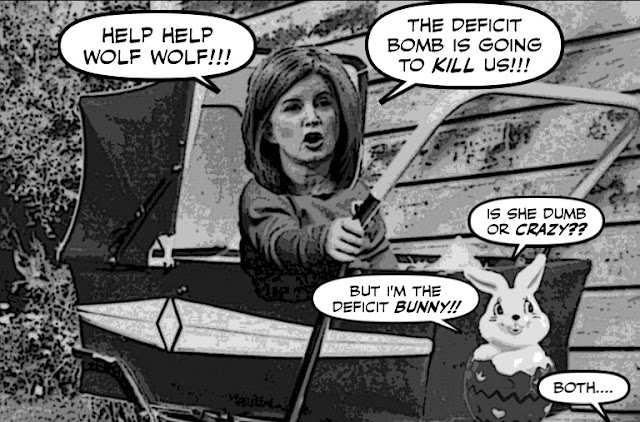 Which along with everything else, should help keep the Cons in their strollers, and out of power.

For at least a generation.

Now tell me, admit it, don't you just LOVE this Con clown movie?

hi e.a.f...yes of course it's an investment, and the Cons can't explain what they would do to produce more jobs at a time when unemployment still a huge problem. The policies of austerity have all failed miserably, and if the Cons had remained in power they would have led us to absolute catastrophe....

If Jason Kenny becomes the leader of the cons, I will celebrate because they will not gain power.

Jason Kenny should come out of the closet in his mother's basement first before he can play with the big boys. He doesn't stand a chance.