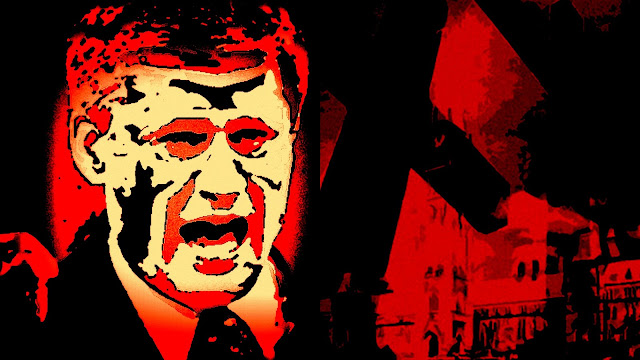 It's finally official. At the stroke of midnight tomorrow Stephen Harper's ghastly little theocratic project, the so-called Office of Religious Freedom, will come crashing down.

And finally be buried in the garbage can of history.

The government will not renew the mandate of the controversial Office of Religious Freedom, according to Foreign Affairs Minister Stéphane Dion.

“We believe that human rights are better defended when they are considered, universal, indivisible, interdependent and interrelated, as set out in the Vienna Declaration,” said Mr. Dion.

And while I'm getting ready to celebrate, by leaning out of my window and ringing a cow bell loudly,

And yes, can you believe it?

He's accusing the Liberals of having a "hidden agenda."

A Con of all people.

But then of course they are desperate. And why should anyone be surprised that Kenney should sound so crazy?

When the Office of Religious Freedom was Kenney's theocratic baby.

Designed only pander to the Con's rabid religious base.

And five years ago, when he first announced it, Kenney was even more inflamed. 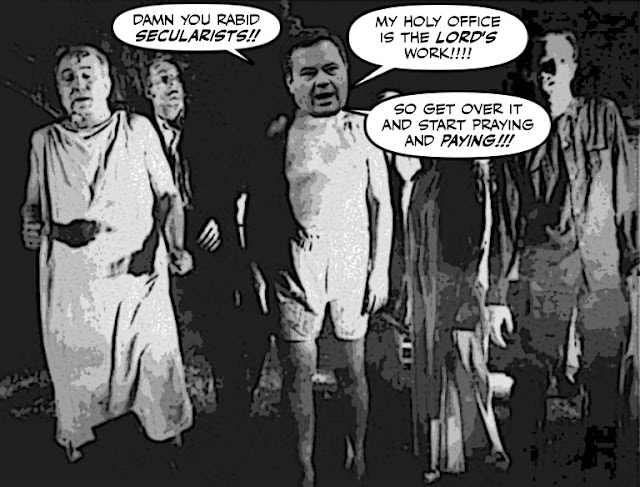 "Perhaps there are some rabid secularists out there who don't understand there are a lot of vulnerable religious minorities under attack around the world," he said.

"To those people who would challenge it because they are uncomfortable with religious faith, I would say, 'Get over it'. We're talking about fundamental rights here."

Because back then he was so swollen with power, he thought he could get away with ANYTHING... 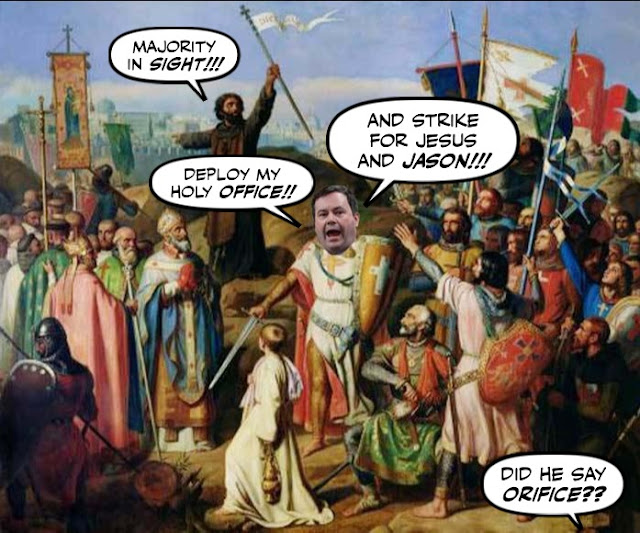 Thought that in the service of his depraved leader Jesus Harper, he would be able to use the legions of young religious fanatics who worked for the Con regime, to impose their hidden agenda.

And turn our foreign policy into one worthy of some kind of theocratic Banana Republic. And our country into a police state.

Which is why Kenney is looking so dark and disappointed these days... 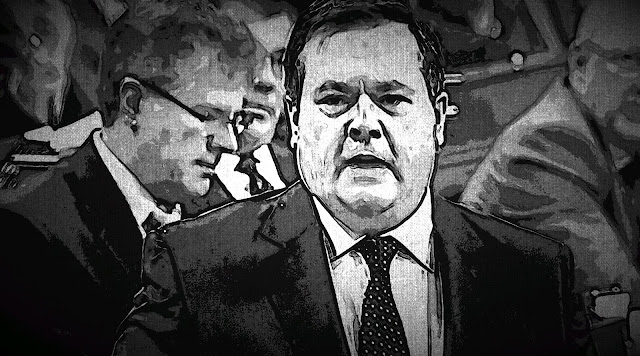 And sounding so crazy, after failing so miserably.

But can you imagine where a religious fanatic like him might have taken us if the Cons had won another majority?

For even The Economist, while playing down the theocratic threat, knew exactly who Jesus Harper resembled.

Stephen Harper is probably the nearest thing that Canada has had in recent times to a prime minister from the religious right. He is an evangelical Christian of a strongly pro-Israel persuasion.

And you only have to listen to the first part of this little video, which I made five years ago, and called Stephen Harper's Hidden Agenda, to understand why he was so dangerous...

We really did dodge a bullet. I hope Canadians never forget that.

But we did defeat those fanatics, and as we prepare to bury the Office of Religious Freedom.

Let's keep working as hard as we can, until the day we bury the Cons once and for all... 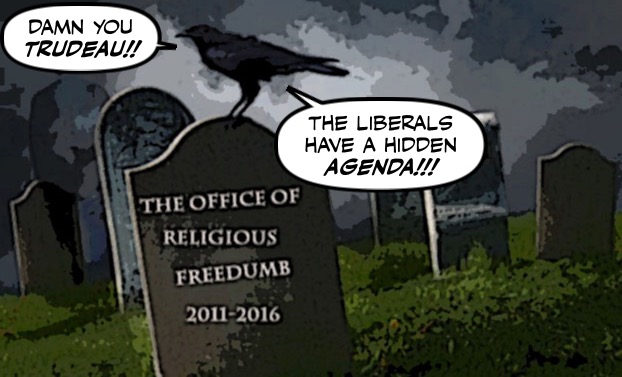 I thought it might be secretly funding evangelical Christian missionary work.

We really did "dodge a bullet!

What's wrong with helping persecuted Christians/Jews etc over there? From the website its objective "protect, and advocate on behalf of, religious minorities under threat; oppose religious hatred and intolerance; and promote Canadian values of pluralism and tolerance abroad." On a measly budget. You dislike them Simon because the Conservatives were using the office to get support/votes from Christians here? How is that different from Trudeau pandering to muslims and visiting radical mosques? At least the office helped some people. You liberals are such hypocrites. PS I am far right but I enjoy reading your blog Simon, it's on the complete other end of the spectrum from the sites I usually visit.

In Con doublespeak Freedom means "you are free to do as I say and believe what I believe". They diverted significant amounts of Canadian tax dollars to achieve this goal whether it was religious freedom, foreign aid channeled through mining companies, Canadian consulates acting as lobbyists for big oil,friends of science with anti climate change propaganda,fair elections to restrict voter access, war on everything as a means of population control - drugs,crime,terror, communism ... the list goes on. Kenney can wail but few will listen, especially as the rot will continue to seep out over time.
RT

It is pretty easy to publish on a website what you stand for and what you claim you're going to do, but what you see on the website may have absolutely nothing to do with what really happens. How do we know he spend even five cents protecting anyone's religious freedom. He could've spent it all on promoting his own secret agenda and we would never find out.

They recently did a study and found that not one penny of the monies from the orifice of religious freedoms ever went anywhere other than to con political agendas right here in their fatherland to help buy votes for their fascistic, neo-nazi political machine....and that obviously worked out so well for them. ;-)
No more pathological, psychopathic/sociopathic liar/hypocrite ever walked Canadian soil than the mindless assholes that now call them "progresssive conservatives" which, if your brain is even cognizant at the level of an epileptic chimpanzee, is obviously the greatest oxymoron since the coining of the phrase "military intelligence".

Hallelujah! I will be celebrating the elimination of the Office of Religious Freedom tomorrow night right along with you at Midnight Tomorrow, it's also my (late) Fathers Birthday and he knew how much I Hate the Cons. It seems a fitting gift. Pamela.

Let me try to shed a tear for Jason. Ya that's not gonna work but I found my cow bell

hi anon....who knows what that Office was up to, but the Cons have spent millions fixing up religious building and private schools, and I only wish an inquiry could be held so we could know in how many secret ways they wasted our money....

hi Steve...well at least they're against that monstrous scam to try to buy votes by pandering to their rabid base. The whole thing reeked from the day it was created...

hi Pamela...I know you know that. But I'll always wonder how many other Canadians did? The Con media never properly examined who exactly were the young fanatics working in the PMO and other departments. And had the Cons won another majority I'm sure many Canadians would have been rudely surprised....

hi anon 2:01...all people from whatever party are welcome here, even conservatives. As long as all follow the house rules. Argue as passionately as you like just try to be as polite as possible.
As to your question, the reason I am against something like the ORF, setting aside the fact that it was just a hollow shell, is that you can't set up a hierarchy of rights. And you can't make it appear, as Harper did, that religious rights are more important than human rights. When all are human rights, and we should all be against any kind of oppression wherever it rears its ugly head. Despite our political differences, I would defend your human rights and I would expect you to defend mine...

hi RT...One of the worst things about the ORF is that it was clearly set up to please their Christian base, and did almost nothing to help other persecuted religious groups. It was all political and had very little to do with religion. As you point out, it was also part of the same game missionaries having ben playing forever. Soften up the locals, and pave the way for multinational companies to move in and exploit them. I know some good Christian doctors and nurses who do great work ministering to the poor and the sick, but the ORF was more interested in theological matters, and in my opinion absolutely useless....

hi Pamela...well that's a happy coincidence. Celebrate your dad's birthday and the end of the Office of Religious Freedom at the same time. I'll drink a toast to that... ;)

hi e.a.f... yes, don't waste any tears on Kenney. He is an absolute mess these days but nothing more than he deserves. Unfortunately my buddy Seb read my post and hid the cow bell. But I still have a portable fog horn... ;)

should you ever need a cow bell, please feel free to write. I some times keep them in the trees.