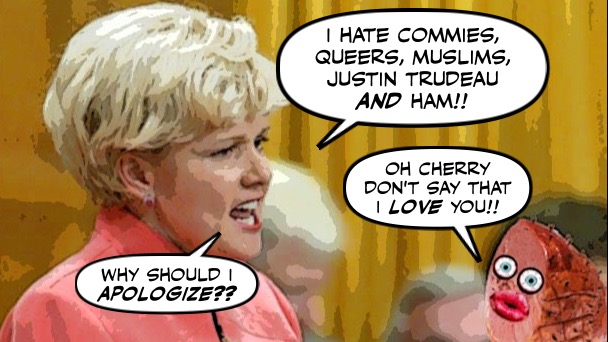 In one of my last posts I told you how the monstrous Con MP Cheryl Gallant had been caught in a compromising position, or at least a very embarrassing position, with a glistening Easter ham.

Or several of them.

And had been exposed as having invoked the memory of the dead Cpl. Nathan Cirillo, to peddle those hams at a bizarre Con fundraiser.

But although Rona Ambrose tried to cover for her, by blaming Gallant's staff for the ghastly gaffe. Gallant herself has refused to explain herself, or talk to the media.

And when a reporter bumped into her yesterday, she ran squealing for cover. 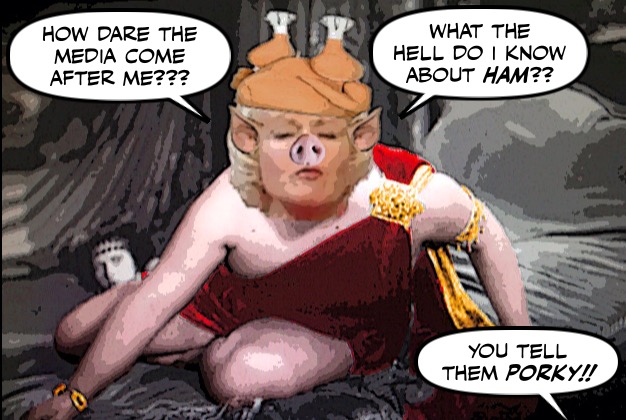 Only to fail miserably.

“Can you tell me what happened at all?

Do you apologize for that? Do you stand by it?” I asked.

“When I have the answers, I’ll give them to you,” she said.

“Where would the answers come from if not… from you?” I tried again.

What followed was 27 seconds of uncomfortable silence as Gallant refused to respond but the elevator refused to arrive.

She wouldn't answer the question. But she couldn't escape the reporter.

At one point she tried to call someone on her cell phone to get out of the interview, but Parliament is also famously bad for cell phone coverage so she couldn’t get a signal.

Which couldn't have been more hilarious, or made her look more like a Con clown.

Or a batshit crazy monster.

But of course we will have the last laugh. Because if the ghastly Gallant thinks she can get away it, I fear she's sadly mistaken.

And has even been thrown out of a nursing home.

Conservative MP Cheryl Gallant is being accused of a "disrespectful" act to some "vulnerable" voters after she crashed a Renfrew nursing home to drum up votes. Gallant, seeking re-election in Renfrew-Nipissing-Pembroke, got kicked out of the Bonnechre Manor long-term care facility Friday after she went into residents' rooms uninvited.

For showing the elderly residents absolutely no respect. As only she could.

I think this latest scandal might actually do her some real damage, for it has all the ingredients. The lack of respect for a murdered soldier, those glistening Con hams, and of course the callous beast Gallant herself.

It's the sort of thing people remember.

So I wouldn't be surprised if that hammy story haunts her all the way to  the next election... 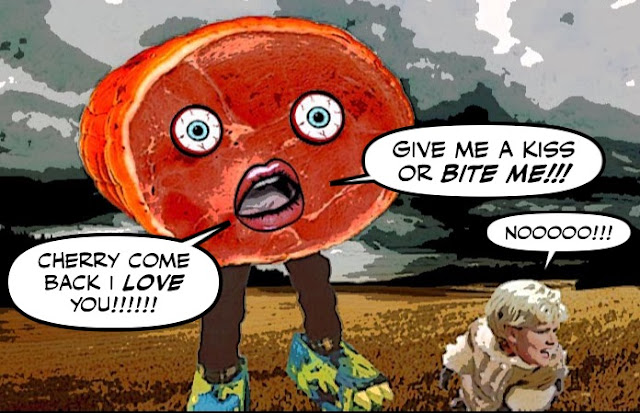 And when Rona Ambrose claims she is renewing her party we'll be able to laugh in her face.

Point to the ghastly Gallant, and say no, that's who you are.

She's a Con unfit to be an MP.

And you're are, and always will be, a party unfit to govern...

Bye the bye I am so against a soldier being stationed on that monument. Harper did it to stoke militarization in the Canadian Public. That was to get votes and control of them. It is more important to protect the returning veterans and make them healthy again than to guard a memorial.

Simon, I wish they had video of her at that elevator to show what a coward she truly is. There's only one person who could have come up with such a hare-brained idea and that's Cher-ill. Rona defending her is not surprising but equally deplorable, after all, in their bigot world, what Rona did is called professional courtesy. Bigot Girl Power!
I cant wait to see who they try to pin the blame on and hope somebody in her riding association does the right thing and sets the record straight though if you're daft enough to work for her, it would seem unlikely.
On a positive note, lets look at Cher-ill as the poster girl for the Reformacon party. She represents everything ugly that they stand for and has the audacity to convey it. Harper must be proud.
Happy Easter Cher-ill! Here's hoping you choke on your ham.
JD

I could swear that Gallant must have been raised in Texas. At least, it looks like her spiritual sister seems to still reside there. http://mikethemadbiologist.com/2016/03/06/will-education-reformers-decry-the-wackaloon-who-might-lead-texas-board-of-education/

Looks like Gallant has finally apologized for this travesty. But here's the interesting bit:

Gallant's apology was released shortly before 5 p.m. on Thursday afternoon, March 10, a few days after interim Conservative Party of Canada leader Rona Ambrose told reporters on Parliament Hill that Gallant had already apologized and "taken back" the offending email.

Repeated calls to Ambrose's office for clarification on where Gallant had previously apologized went unreturned.