Jason Kenney and the Insane Con War on the Deficit 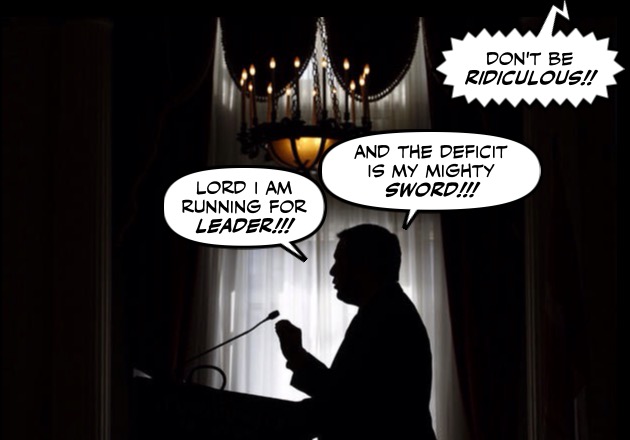 Yesterday I told you that Jason Kenney has apparently decided to ignore his better political instincts, and his main adviser, and is preparing to launch his campaign to become the new leader of the Harper Party.

And has decided to make the Liberal's projected deficit his main campaign weapon. 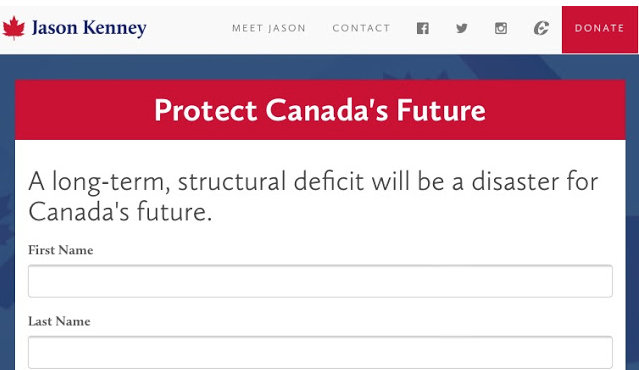 Even though polls show most Canadians support the idea of a deficit.

And the only ones it seems to drive absolutely crazy, are people like Kenney, and Andrew Coyne. 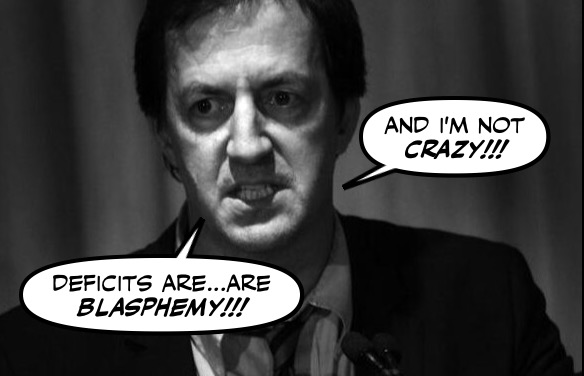 The faithful Con stooge at the debt ridden Postmedia empire, who is practically twitching with outrage at the thought that the Liberals CHOSE to go into debt.

There has been no great falling off of revenues since the last budget: in fact, for fiscal 2016 they came in slightly higher than forecast. Had the Liberals stuck to the spending track laid out in that same budget — financing new spending out of cuts to existing programs — the deficit would be a non-issue: perhaps $10 billion this year, half as much in subsequent years.

There are any number of ways they could have kept their promises, in other words, without running $30-billion deficits. These are debts of choice, not of circumstance.

And actually suggests the Liberals should have stuck to the spending track laid out in the HARPER regime's last budget.

You know, Joe Oliver's desperate plan for an even grimmer bloodier future... 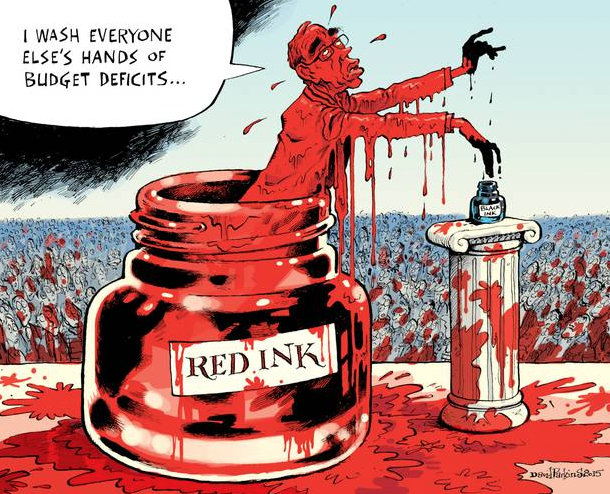 Even though the Liberal's projected deficit is a small one, a tiny fraction of one percent of our GDP.

And even though it was a Liberal campaign promise, one that helped set their brand apart and win them the election.

And as Chris Hall writes, they are only doing what they promised. 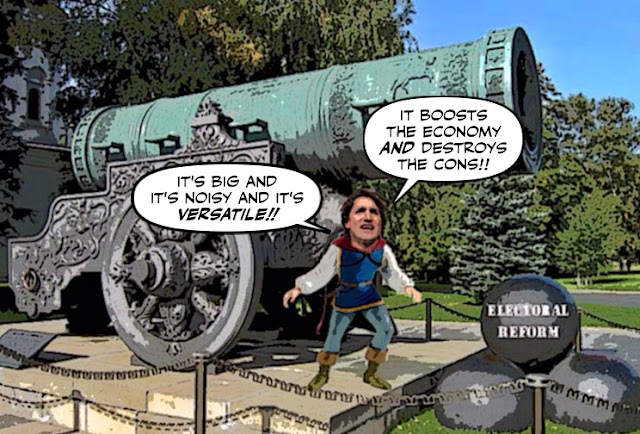 Trudeau and his finance minister Bill Morneau want to connect with voters who see the role of government as an agent of change.

There is a pattern here. Trudeau's Liberals aren't waiting any longer to redress historic wrongs by committing billions of dollars to indigenous communities. They're starting it off in their first budget.

These Liberals aren't signing on to a climate change deal and then sitting back to see what the rest of the world will do. They're preparing to take extraordinary measures, up to and including imposing a national price on carbon emissions. This is not a Liberal government focused on the immediate rewards, or on the here and now. This is a Liberal government looking to secure a different future.

But then why should we be surprised? When both Coyne and Kenney share the same belief, that government should be shrunk until it's small enough to drown in a bathtub.

And of course, Coyne has other motives as well... 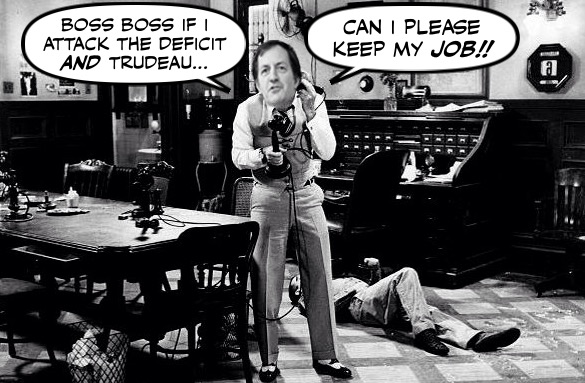 If Kenney thinks that he has a winning issue, that will propel him to victory... 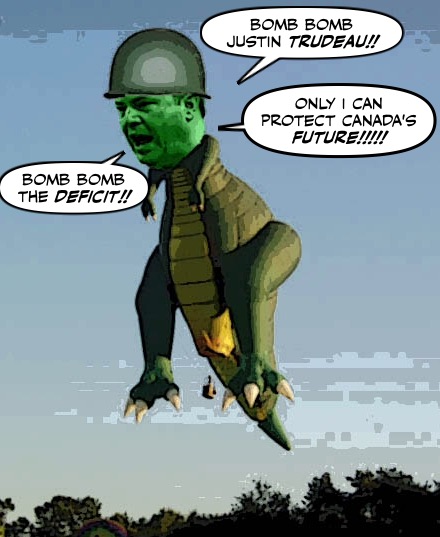 He is sadly mistaken. For as Tim Harper points outs, the future may not be as scared of the D-word as Coyne and Kenney.

It isn’t just lack of Commons time that will make Kenney’s campaign tough. It is the larger question of whether young Canadians — those who voted Liberal — are so used to rolling the dice on their own budgets, with hefty mortgages, heavy credit card debt and longer-term car loans as a route to their own financial growth that they merely shrug when their government does the same.

Perhaps those who rail against living beyond your means and demand fiscal accountability are part of the older demographic that is loyal to Conservatives. By echoing that base, Conservatives again risk shouting at the converted even as they are unheard by the demographic they must woo in order to grow.

And as polls show neither are almost half of the Con's supporters.

So Kenney's absurd deficit campaign will only appeal to only the most rabid members of the Con base, and will prevent the Harper party from renewing myself.

Which is why I must ask you again to please join my campaign to anoint Jason Kenney as the next Con leader... 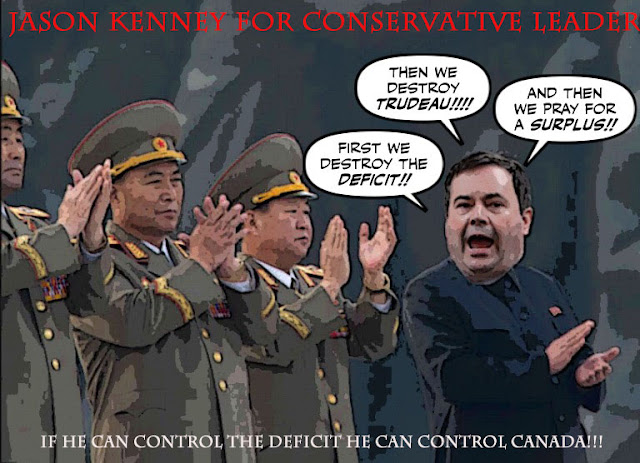 Unlike him I'm not going to ask you to pay for his campaign.

So that he can lead his flock, and the Con media, to their final and total destruction...

"Perhaps those who rail against living beyond your means and demand fiscal accountability are part of the older demographic that is loyal to Conservatives. By echoing that base, Conservatives again risk shouting at the converted even as they are unheard by the demographic they must woo in order to grow."

Ironic that the media shrieking the loudest about fiscal responsibility is drowning in a sea of debt.

Con base is an odd ball concept when it comes to fiscal responsibility as Dan just pointed out.

Harper's life story comes to mind. Moved to Ottawa at age 40. Same year he received MA in economics, and same year he got married. His first real job was leader of Canadian Alliance, or some such extreme right left coast party. From there, clawed and elbowed his way to leader of CPC, after a disgraceful coup with his buddy Peter Mackay that gutted the PCP of Canada. Along his way, he tried to get hired as an economist by the Canadian civil service, and often borrowed money from the Canadian Alliance to feed his family. This story is far from The Great Economist one that some would like us to believe. From his failure to launch, to becoming PM of Canada because he couldn't get hired anywhere else is weird but sadly true story. How can one preach fiscal responsibility with such fanaticism after being so financially unproductive for most of his life. How media and public have never caught on to the big Harper lie likely has to do with the fact that he is no more than a fat school yard bully.

So when they preach and shout, I like to frame them in the context of their real lives. Christie Clark is another one...