Justin Trudeau and the Anti-Trump Factor 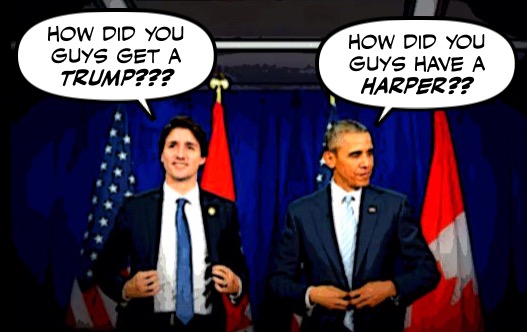 Next week Justin Trudeau will set off on a three-day visit to Washington, which will include a glittering state dinner at the White House.

The first for a Canadian Prime Minister in almost twenty years.

And while he will discuss plans with Obama for a continental climate change strategy.

Justin is already making it clear that there is something or someone he WON'T be talking about. 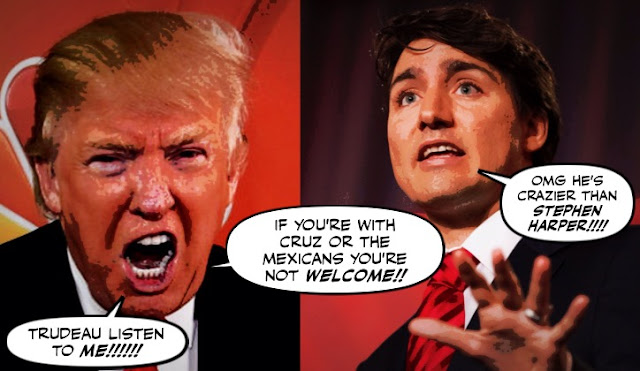 Prime Minister Justin Trudeau intends to avoid commenting during his upcoming U.S. trip on the hottest topic in American politics: the presidential candidacy of Donald Trump.

“The prime minister feels very strongly about this — he doesn’t get involved in domestic politics,” said one Canadian official.

But that won't be easy.

A joint news conference with President Barack Obama is planned next Thursday, with a luncheon at the State Department to follow. Trudeau will also make a toast at a state dinner and address a Trump-abhorring audience at a gathering of progressive think tanks. 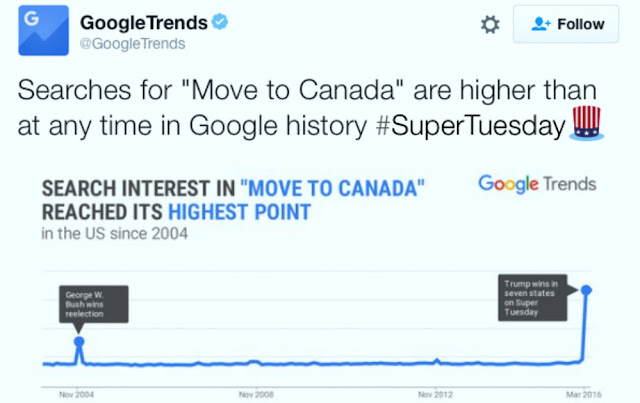 Not with newspapers in that country urging progressives to get ready to migrate... 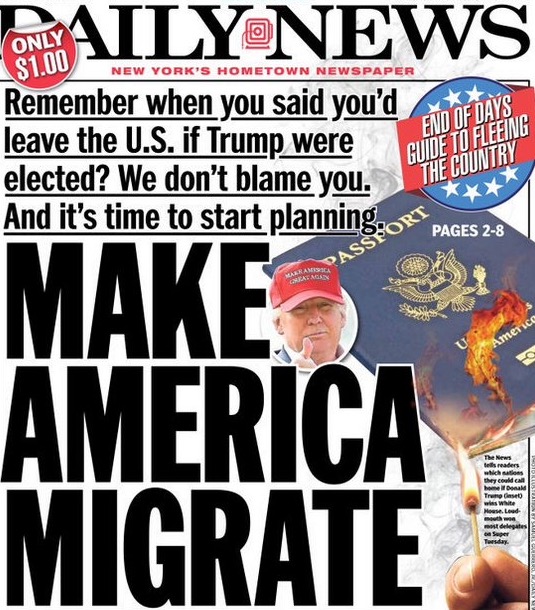 Canada's new Liberal prime minister, Justin Trudeau, stormed to a stunning electoral victory last year. He did so while coping with the attacks of opponents who cast him as an inexperienced, slightly buffoonish dilettante trading on a powerful family legacy. Sound familiar?

But Trudeau's progressive, inclusive message could not be more different than that of Trump.

And all I can say is, isn't it great to have a Prime Minister we can be proud of again?

One so different from the creepy Stephen Harper, and that vulgar clown demagogue.

One who doesn't have to say anything about about Trump to make him look like a brutish beast.

All he has to do is be himself, and express our Canadian values... 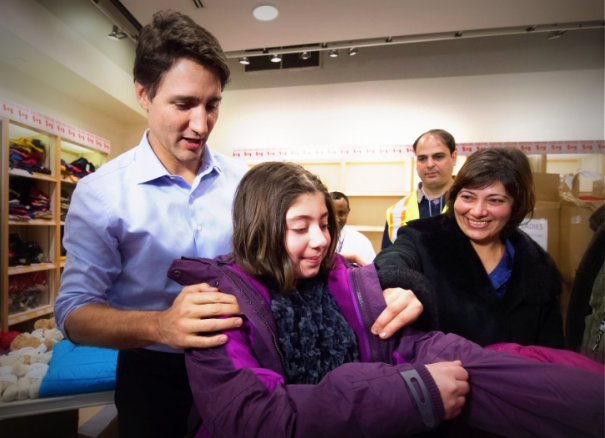 No wonder he's so incredibly popular.

According to polls, the party has more support today than it did on election night, suggesting that some Canadians — particularly those who voted for the New Democrats a little over four months ago — have been newly won over by the Liberals' performance in the early days of their government. 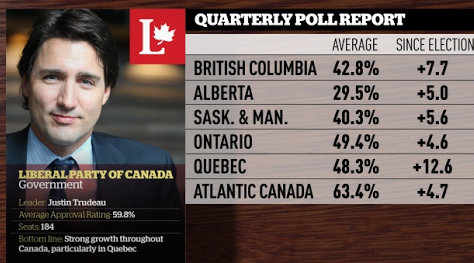 The Liberal increases in support have come from one end of the country to the other, matching the high levels of satisfaction with the government's performance that polls have recorded so far. Prime Minister Justin Trudeau has averaged an approval rating of 59.8 per cent over the last three months, far outpacing his rivals.

Because those numbers are simply amazing. And what they also show is how hungry  Canadians are for something nobler and better, after our long dark nightmare.

And of course, I can only imagine how disappointed Rona Ambrose must be after calling Trudeau every name in the book, from traitor to crook to incompetent, to absolutely no effect.

And how bitter she must be at the fact that her fallen leader was never invited to a state dinner at the White House... 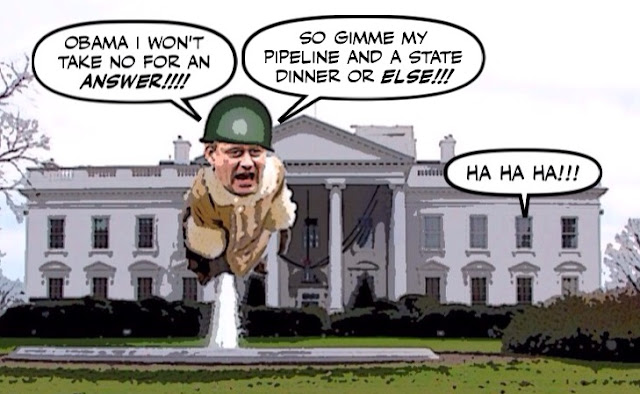 As bitter as the tiny handful of progressives who keep claiming that Justin Trudeau is just as bad as the depraved dictator we defeated... 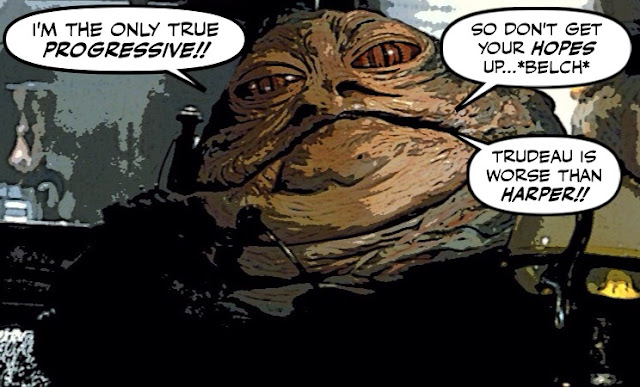 And some of whom keep attacking me in a most disgusting manner for simply reflecting the views of most progressive Canadians, rather than the views of Cons and collaborators.

Oh well. Pity them for they would crush their own hopes and dreams, as well as those of others.

And rejoice that we have a leader and a government who although not perfect, are truly Canadian.

And that we are living in a country that we can be proud of again...
Posted by Simon at 7:44 AM

As shown in this article, there are two key factors that explain the current political situation in the United States:

The vote gap between conservative and liberal America will only get larger over the coming decade.

Best thing we can do for our US neighbours is to encourage them to get out and vote. There is a grass roots Latino get-out-the-vote campaign starting up in NY. So folks, when you see this stuff on your FB or Tumblr, share:-) Every bit counts, and we are so fortunate to live in countries where hacking the blogger is the worst thing that can happen. We need to SHOUT OUT our displeasure, and offer support to those who need it in getting their voices heard.

I agree with you, Simon - I didn't vote for Trudeau, but I don't think he is nearly as bad as Harper. I would have voted for Trudeau strategically to defeat Harper, if necessary. For someone I didn't vote for, I am actually more impressed with Trudeau than I expected to be. Please don't let progressives who attack you for your views get to you, Simon. It's true, ten years under Harper has blighted the Canadian values of kindness and civility and tolerance and hope among progressives as well as conservatives. These values matter more, in my opinion, than which side of the political spectrum one professes to embrace. Let's reclaim them.

Simon don't let those freaks get you down. You're better than all of them and they're just jealous.

would have voted strategically, but it wasn't necessary. The NDP was going to take the riding anyhow. Having said that, I'm happy Trudeau is doing the good job he is. Not everything he does will make me happy, but he is doing a good job of running the country.

In my opinion, Trudeau has done nothing yet which needs attacking. To date he is to be supported for his work. When progressives think attacking him is going to work, think of this: Do you want another 9 years of the Cons? You can work for the progressive party of your choice and do a good job and not knock Trudeau at the same time.

You do not change 10 yeas of disastrous policies overnight. Accept the changes that are happening and try to prevent a backwards slide. Progressives do more harm than good by parroting talking points of those that have lost direction. I have to bring up Kevin Page declaring that the Trudeau government has less transparency that the Harper government, for was it not Page that had to force the Harper government to release, by court order, documents he was entitled to under his mandate?

The best thing either leader can do is ignore Trump, at least in public. If they simply behave like educated people, the contrast with that raging buffoon is patent.

Doubt many leftists think Trudeau is the same as Harper. Though class analysis has nothing to do with jealousy, or sectarianism.

"And that we are living in a country that we can be proud of again..."
Now if we could only find a progressive premier/normal person to run Ontario instead of mcguilty's psychic clone running Ontario further into the dirt, we would indeed live in a province/country we could be proud of. I am utterly sick and tired of p.c. corporate asslicking being passed off as progressive economic policies here in Ontario by the libero-con ruling regime here time after time...
Trudeau is better than heil harper but nowhere near as liberal in his views as his campaign positions indicated he would be and his elf wynne is a fucking nightmare...what a shame.
Have your fingernails torn out or have your feet held in the fire. Nice leadership choices we got...ay?

hi political junkie...yes there are powerful currents moving what's happening in the United States. The changing face of the country, combined with a generational gap, growing inequality, and a loss of faith in the establishment are really setting up a perfect storm. On my most optimistic days I think we're heading for a revolution. On other days I fear we're heading for fascism...

hi TS...I don't think we're going to have to encourage our neighbours to vote. I think that when the time comes you're going to see a record turnout. I think it's going to be a mega version of what happened in Canada. We came out in large numbers to stop Harper, and they'll turnout in droves to stop Trump.
And thank you for saying I'm your favourite blogger. If Trump wins I'll send you a postcard from Patagonia... ;)

hi anon...don't worry I won't let them get to me. I just find it frustrating. I have no problem if people criticize the Trudeau government for doing this or for not doing that.
But to claim that Trudeau is just as bad as Harper is madness. For whatever his human flaws, he is a million times better than our defeated dictator.
But you're right, now that we have something that resembles Canada gain, we need to reinforce the values that Stephen Harper damaged. And I am still optimistic. I think when Canadians look at what's happening in the United States, they will appreciate even more what kind of a country we are now living in....

hi anon...thanks, and as I said above, don't worry I won't. As I explained, I'm more frustrated than angry. I can't understand why some people are so relentlessly gloomy when we have so much to celebrate...

hi e.a.f...yes exactly, progressives should be a little more positive. Nothing is stopping them from criticizing the government on one issue or the other. But we should also be coming up with new ideas and contributing to the process of restoring our damaged country. Instead of just sitting on our asses being relentlessly negative....

hi anon...yes that's a good point. People should be a little more patient. The rush to judgement from the Con media has been relentless. But those grumpy progressives should give the Trudeau government at least a few more months before ruling it a success or a failure. As I've said many times, at this point I'm very happy with the direction the government is heading....

hi lagatta....no, as that poll shows, most leftists are satisfied with the general direction of the government. And the really grumpy ones are in the minority. But unfortunately they include a few of my friends, and people in the blogging community, so I can't get away from them... ;)

Trudeau will appear on CBS 60 Minutes this Sunday.