Could This Be The End of the Postmedia Empire? 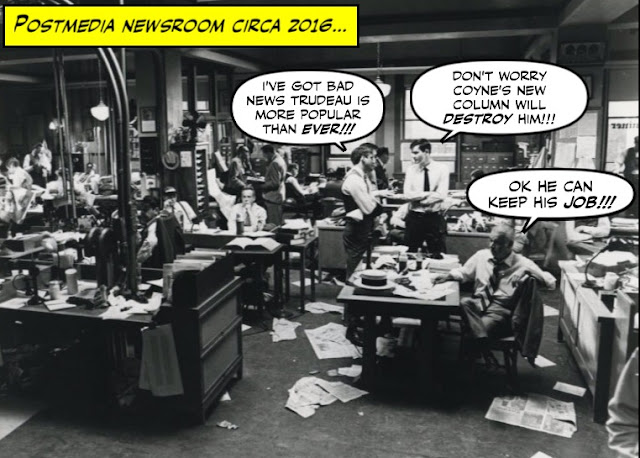 As you know the Postmedia empire is in big trouble. It's buried under a mountain of debt, it's running out of money, and its reporters have been forced to tailor their articles to please their bosses.

If they attack Justin Trudeau they can keep their jobs, if not they're gone.

Well now it looks as if writers like John Ivison, or Andrew Coyne, are going to have to kick up their begging a notch. 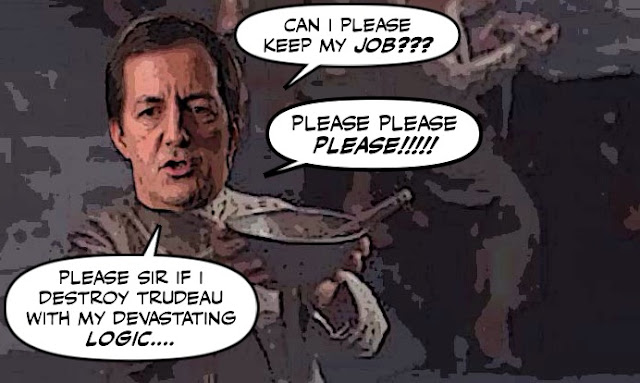 For Postmedia's problems just got even worse.

The Wall Street Journal is reporting that Postmedia's largest shareholder is looking for buyers of its stake in the media organization. GoldenTree Asset Management LP, which specializes in corporate and structured debt, owns 52.36 per cent of Postmedia's variable voting shares and a portion of its debt, according to the company's most recent management information circular.

Golden Tree, the hedge fund that wants to sell its stake in the company, can't find anyone to buy it.

Several potential investors contacted by The Globe and Mail said they had been approached by GoldenTree but were not interested in making a deal. Postmedia appears to have little value to salvage – and what does exist will take a lot of heavy lifting to unearth, sources said.

Postmedia's debt, much of which is priced in U.S. dollars keeps growing, Its advertising revenue keeps shrinking.

Print-advertising revenue continues to decline by double-digit percentages, including a nearly 18-per-cent drop in 2015, while digital ventures have failed to take up the slack.

The price of a share which about two years ago was worth about $20, is now worth ten cents, which some say is not low enough. 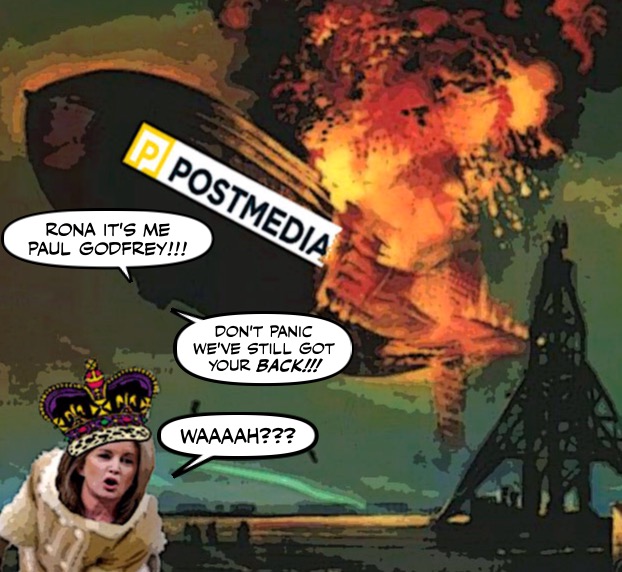 And while I feel very sorry for Postmedia's ordinary employees, the newswriters, editors, printers, truck drivers, and all the others who could lose their jobs through no fault of their own.

I have to admit I have considerably less sympathy for its political commentators who turned the editorial pages into a branch of the Con propaganda service, to please their ghastly master Paul Godfrey... 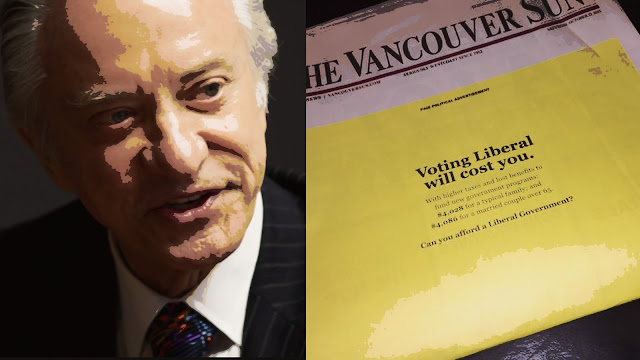 Who made it very clear where he stood.

And whose political reporters were near the end reduced to competing with each other to see who could please Godfrey the most... 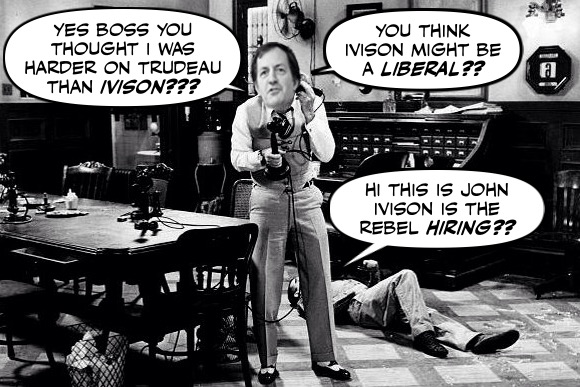 By finding any excuse to attack Justin Trudeau, like they never attacked Stephen Harper.

Even though most Canadians were happy with the Trudeau government, and glad to see Harper go.

So I can't pretend that I would be sorry to see them go.

Or see climate change deniers like this one lose their columns... 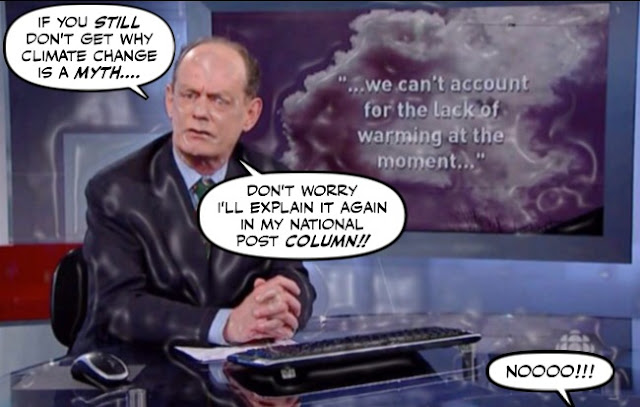 Or see that Con propaganda service bite the dust.

For out of its ashes will almost certainly spring something, or many things better.

So that would be something to celebrate.

And take them with me to the funeral... 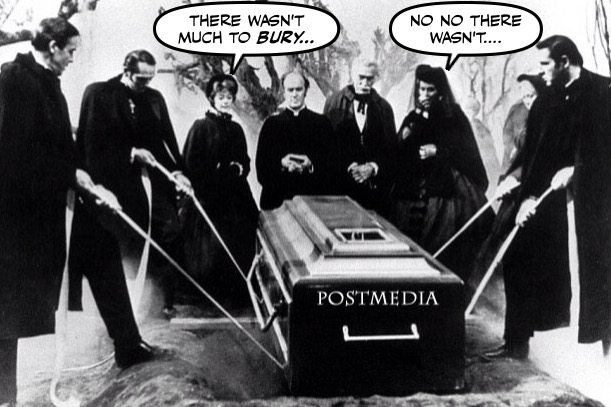 PostMedia, as a going concern, has little appeal. It needs to be broken up, parcelled out. Victoria's Times Colonist demonstrates that there is indeed life after PostMedia. The TC ditched the PostMedia rightwing clap trap, moved to the centre, and found a healthy following. If Trudeau wants to implement democratic restoration, the starting point is to break up the corporate media cartel. There have been three Liberal commissions that explored the problem going back to the 70s. We know what's wrong. We know what works. We need a government to crack down on undemocratic concentration of ownership and market domination through cross-ownership. The ideal time to act is now.

It seems the fates are now looking at Post Media. It's too bad that they're taking down a lot of local papers in the process.

Please for the love of all things holy let this be the beginning of the end for this steaming turd known as Post Media. And let us also be diligent and shame any government official that suggests we bail them out.

I'm still wondering how rich these lamestream, right wing media outfits got, on our cash by way of harper's propaganda garbage?

Times Colonist a hot mess, they got bought by former conrad black stool pigeon david radler. Many have cancelled subscriptions due to lousy journalism, bias and outright fraudulent reporting on crd, no mention of johnson st bridge scandals linked to harper appointee gail stephens who now is in charge of Museum of Human Rights after she fled victoria. TC just regurgitates internet news with very little local news. I suspect Black
waiting for Nat Post to hit bottom, then will buy with himself a shadow investor.

hi FS....yes Rex Murphy doesn't deserve to come from Newfoundland. But don't worry, we don't blame the great people of that province. Although since I'm living practically across the street from Rexie, and am forced to see him all the time and bite my tongue, I wouldn't mind sending him back to you... ;)

hi Mound...yes you're right, if the chain could be broken up, I'm sure many papers would survive by themselves, better serve their readers, and stop being a Con propaganda service. The only problem is that because they have centralized so many services, like having one advertising department serve several papers, it would be hard to disentangle some of them. And you're right, the government has been dragging its heels for decades, and something needs to be done, and soon....

hi Dan...yes, I can never forget the zeal of the right-wingers when the Post was first started by Conrad Black and company. It was practically a Con cult. But there inability to shake that approach has really come back to bite them. They went to the right, while most of the country went to the left, and the result was predictable. I hope that some local papers can be saved, for some are actually doing reasonably well, and free from the clutches of Postmedia they might do even better....

hi anon....well as you know I'm keeping my fingers crossed, and I'm putting my money where my mouth is. For even a really loud but lousy Mariachi band isn't cheap. But as the Visa ad says, some things are priceless... ;)

hi Jolly Roger....I haven't the slightest doubt that the Cons used those ads to help keep some struggling media going, and no doubt make them more cooperative. I used to monitor Sun News for government ads paid for by you and me. And believe me we paid plenty. I wish we could have an inquiry into that porky program. But I guess, as we say in Quebec, that would be dreaming in technicolour....

The Rebel is now worth more than Post Media. Sell it to Ezra for a dollar.