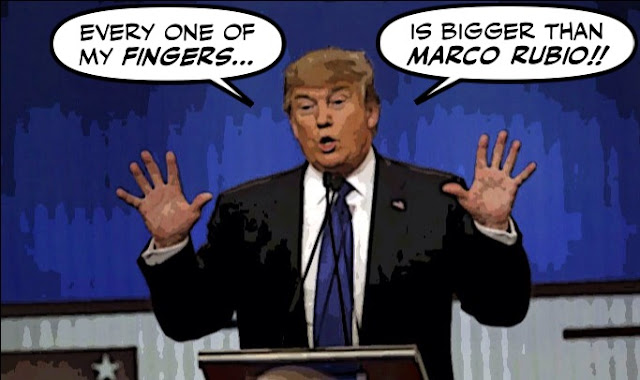 I wasn't able to watch the last Republican debate because I don't get Fox at my place.

Which turned out to be just as well.

Because the last thing I would have wanted to see is Donald Trump defending the size of his hands and his...um...penis.

"Look at those hands. Are these small hands? And … if they're small, something else must be small. I guarantee you there's no problem," Trump said, showing his hands to the audience, assuring them that his hands were normal-sized, as was his "something else."

And so soon after he said this... 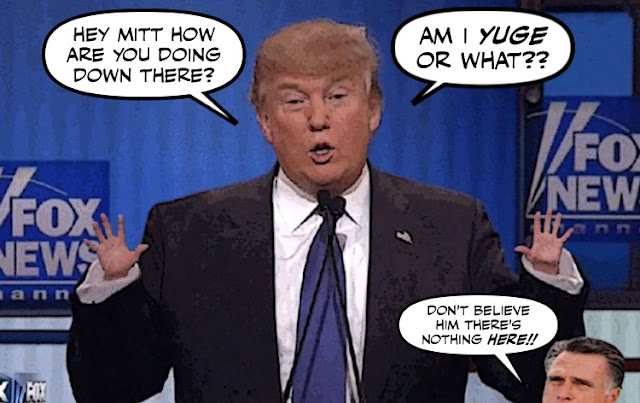 And all I can think of is, how low will this Con show go?

How crazy can America get?

Has anybody tried this yet?

And of course, holy jumping Lord of the Shrimps, Trump must REALLY hate me !!!!! 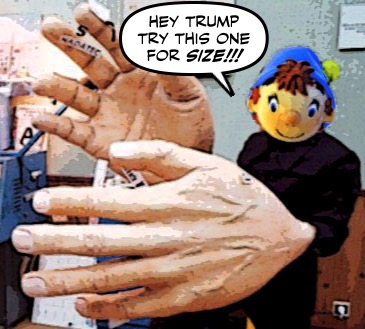 Which could be dangerous eh? 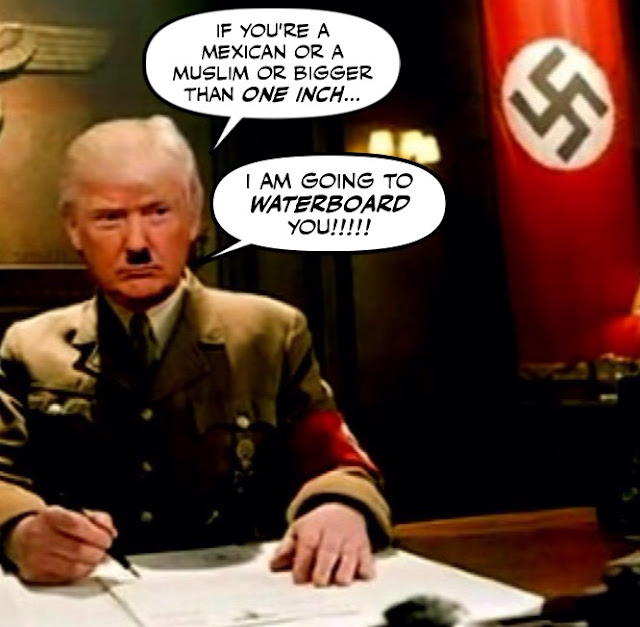 But then I can't help it if I'm huge or yuge.

And I'm sure Herr Hair Drumpfy would also have been wildly jealous of President Lyndon Johnson... 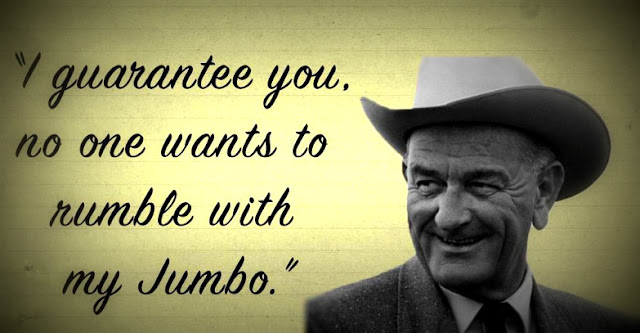 Who despite his many flaws, was apparently a bigger man than Trump.

And while we're at it, no doubt bigger than Stephen Harper... 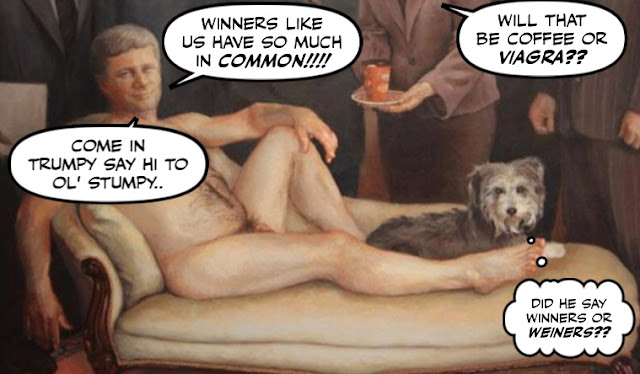 Who was always a nasty little leader, as morally depraved as Trump, and has no doubt wilted even more since his humiliating defeat.

And the even better news? If that's possible.

Being a vulgar, racist, abrasive jerk, only works until it doesn't.

Many Trump followers love that he doesn’t care about being called racist, misogynistic, xenophobic, etc. They’re sick of the media demanding that every Republican in the land disavow some dumb thing said by someone they’ve never heard of.

But this strategy “works” only in a narrow, shortsighted sense. Such thinking is likely to cost the party the election, and saddle Trump and his supporters with costly baggage that will make it harder for them to achieve their goals in this or any other election cycle.

It might work during a primary, with a crowded field of mediocre candidates. But it won't work during the real election campaign. When the Democrats start pounding him with their attack ads.

These ads will be devastating. Most Americans already dislike him even more than they dislike Hillary Clinton, even though most of them probably don’t yet know about the Klan gaffe or the fraud trial. By November, I guarantee that they will.

And all the ammunition he has so generously given them.

Because when they do, Trump will start shrinking all over.

He will go down.

He will take his party with him... 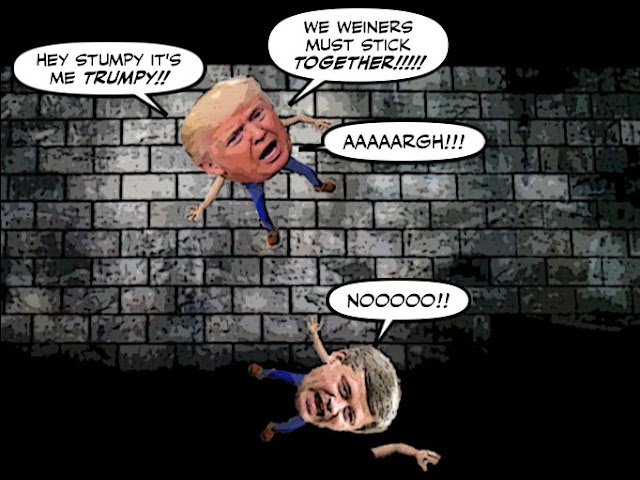 How you can always count on Cons to act like animals.

Shock us with their bestiality.

And sooner or later destroy themselves...

Simon I really feel for my US friends!!!!! I just cannot believe this bigot, racist is even getting air time!!!!!!! We just get rid of our bigot, racist on in Canada...... And now the US is suffering through the same. We just have to hope that common sense prevails in the next US election!!!!!!!! FS

The biggest problem with Trump is his toxic narcissism. He wants to be yooge, but not actually do all the grunt work or deal with the responsibility/headaches that go with it. His business empire was built on bluster and arrogance. Despite what he thinks, nations don't work that way. When the election becomes a grind, Drumpf is going to get bored and the campaign is going to suffer. This will probably not end well for him.

The alienation of the Hispanic vote is another yooge problem. The Repubs have done pretty much everything to make them vote Democratic for the past decade. Bush 2.0 won 04 in part by strong Hispanic outreach which both McCain and Romney pissed away. All Drumpf's wall on the Mexican border has built is keeping out many Hispanic voters.

Drumpf tapped into the anger of the low information white voter, but it's not enough as the US isn't what it was even in 2000. Despite losing the white vote (by a slim margin), Obama won two terms comfortably despite the horserace bullshit meme pushed by the MSM and desperate/deluded Republicans/wingnuts (see unskewed polls guy and Karl Rove.) The swing votes are the minority voters which skew heavily Democratic.

I'm not crying for the GOP either. They set themselves up by relying on Xtian fundamentalists, the racists and angry Teabagger morons to provide the footsoldiers for their Party of "NO to anything Obama wants" over the last 8 years and now they've lost control of them. This is pretty much a lesson in "Be careful what you wish for because you might get it."

We are watching the Republican party implode. I'm sure they'll hold the House (thanks to state gerrymandering of election districts) but it won't be something those clowns enjoy.

Its a democracy, let them vote for whom they wish and they can live with the results.

Really who cares about Trump. The Generals will not let it out of hand and the rest of the world is having a good laugh. Trump does make Putin look sane though. A little corrupt, but sane.

In an early post by M. Simon, there was a link to an article on changing demographics in the USA. I am pretty sure I read the graph correctly which shows that White population was 60% as of 2015.

This does not mean the eligible let alone registered voter figures are the same but it is hard to believe that any of the 40% of other ethnic groups are likely to vote for Trump and a lot of the White population would not, so it looks like his strategy is not all that great for a general election. No wonder the GOP elite are panicking. Nice :)

Mind, it' hard to see any sane person voting for any GOP candidate.

hi FS ...Don't worry, I'm pretty sure that the Trump story will end badly. He's turning off at least some of his supporters, the Republican establishment is ready to scuttle the party rather than let him control it. Decent Americans will vote in record numbers. And like our Harper nightmare, it will end with a stunning victory for our side...

hi Dan...I agree with all the points you make. And only add that It's starting to believe that Trump is an accidental demagogue. His toxic narcissism as you call it, and his deep feelings of inadequacy, have him playing to the mob without giving much thought to what he's saying or doing.
And basking in the warm glow of their applause and rebel yells. But like Narcissus he risks falling into the deep end of the pool, and I can't help but feel that long before the election he will defeat himself...

hi e.a.f....no we should be deeply concerned about who the Americans elect as president. For not only do we live right next to them, but the fate of the world could also be at stake...

I don't agree the fate of the world could also be at stake. the Americans are a spent force. they are on their way down, while others are on their way up. they may have a lot more weapons, but politically, they just aren't what they used to be on the world stage.

If Trump/Cruz, etc were elected Europe, Russia, China would simply ignore them. Together they are much larger. Then add in some of South American countries and its a whole new game. Mrs. Merkel has enough work with Putin. It is doubtful she or her collegues will want to deal with Trump or any one of his ilk.

As China heads into an economic slump things could change for the U.S.A. considerably. We know who hold the bonds for the American government. if China sells them off or starts to cash them in because they need the money, it won't matter who the President of the U.S.A. is; they'll be a bankrupt country with a Saudi Company owning the Port of L.A. and a company from China owning the stock exchange in Chicago.