Donald Trump and the Rise of the Authoritarians 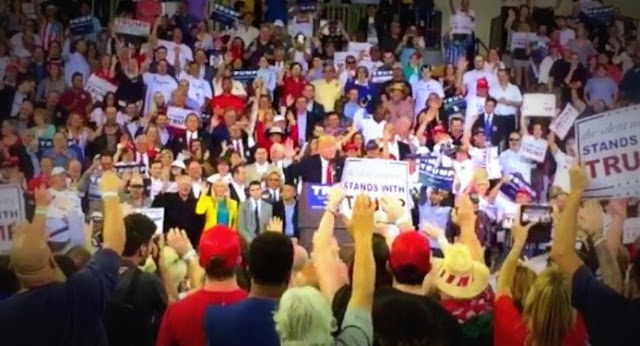 It was depending upon your point of view, either a ghastly gaffe, or a fascist moment.

Donald Trump in Orlando yesterday, leading his followers in a solemn pledge to vote for him in the upcoming Florida primary.

Only to make the gathering look like a Nazi rally.

And play into the hands of people like Bill Maher, who believes that Trump could be a budding American Hitler.


But although there are some disturbing similarities, and as you know I also like to compare Drumpf to a would be Fuhrer... 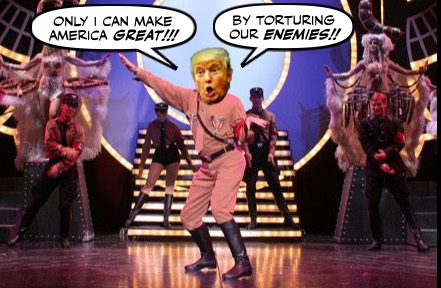 The more I watch Trump's tawdry performance, the more I see only a narcissistic bully and demagogue who is making it up as he goes along.

A man who can be for torture one day, against it the next .

And for it the day after.

An opportunistic hustler driven by deep feelings of inadequacy, with a compulsive desire to make himself appear bigger than he really is.

As he has always done...

And a man too ignorant to really understand the forces he is unleashing. Or the people some social scientists are calling the authoritarians.

Authoritarians are thought to express much deeper fears than the rest of the electorate, to seek the imposition of order where they perceive dangerous change, and to desire a strong leader who will defeat those fears with force. They would thus seek a candidate who promised these things.

And the extreme nature of authoritarians' fears, and of their desire to challenge threats with force, would lead them toward a candidate whose temperament was totally unlike anything we usually see in American politics — and whose policies went far beyond the acceptable norms.

But like a good hustler does instinctively know how to play to a crowd or a mob.

That's why it's a benefit rather than a liability for Trump when he says Mexicans are rapists or speaks gleefully of massacring Muslims with pig-blood-tainted bullets: He is sending a signal to his authoritarian supporters that he won't let "political correctness" hold him back from attacking the outgroups they fear.

This, Feldman explained to me, is "classic authoritarian leadership style: simple, powerful, and punitive."

And all of that should remind us that we too had a leader who tried to use crime and punishment for the same evil purposes... 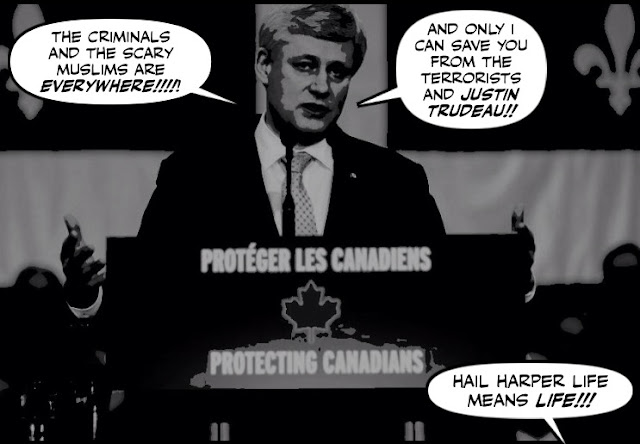 A depraved leader who couldn't punish people enough, or jail enough Canadians. And used bigotry as a political weapon to great effect, until he was finally brought down by our Canadian values.

But not before doing the social fabric of this country great damage.

For while the good news is that like Stephen Harper, Trump is also leading his Republicans to disaster.

For decades, the Republican Party has been winning over authoritarians by implicitly promising to stand firm against the tide of social change, and to be the party of force and power rather than the party of negotiation and compromise. But now it may be discovering that its strategy has worked too well — and threatens to tear the party apart.

Or to the hell of their own making.

The bad news is that the authoritarians who Trump is inflaming, will still be around long after their clown demagogue has left the stage...

And while Trump goes back to his life as a mere millionaire, shrugging off or denying the damage he has done. Because for him it was always and only about The Donald.

The authoritarians he helped stir up, will remain a threat to democracy in that country, as they remain in this one.

For that will be Trump's legacy, as it is the foul legacy of this monster... 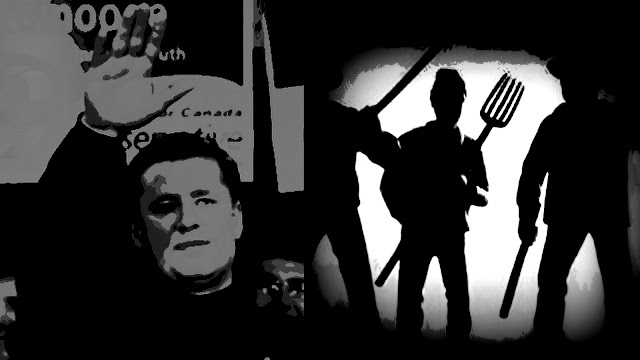 And let's be clear, as our would be Fuhrer used to say.

The Cons may have been defeated. Justin Trudeau may be doing a great job of trying to heal this country's wounds.

But those wounds are deep. There are now hordes of angry, bitter, Con authoritarians out there who if not checked, could one day tear it apart.

And our Canada will not be truly safe, until them and their foul legacy are buried forever...

Enjoyed reading your posts and reader comments about The Drumpf from yesterday. Very interesting results from Super Saturday for both parties. I agree with your assessment of The Drumpf. As I was driving to Montreal yesterday, I was listening to CBCs Under the Influence, and the subject was finding the weakness in your competitors strength. As I was listening, I was thinking about The Drumpf and what could be the weakness in his strength that gets harnessed for his down fall. Because even if he is elected President, he will fall. He does react easily to things that seem threatening to him like penis size and his net worth. Meanwhile, I think you just need to listen to him on any given day, and you can figure out what's irking him. He really is that unstable and lacking in self modulation.

Sanders taking NB and ME is just amazing! In reality, Americans are loosing their homes and are unwittingly giving their children water to drink that is contaminated with lead from aging infrastructure and illegal industrial dumping. Not sure how far The Drumpf will get with these stark realities, even with his reality show fame. Kardashian for vp? Lol, he really is a a mess of a person, one can only hope that his momentum is derailed sooner rather than later.

It's all very well and good to demonize Trump and there are many doing just that on a hourly basis,however,the biggest question is why so many are voting for Trump? And the first thing to realize is that his supporters don't give one shit what anyone says about him.
Chris Hedges answer that question.

College-educated elites, on behalf of corporations, carried out the savage neoliberal assault on the working poor. Now they are being made to pay. Their duplicity—embodied in politicians such as Bill and Hillary Clinton and Barack Obama—succeeded for decades. These elites, many from East Coast Ivy League schools, spoke the language of values—civility, inclusivity, a condemnation of overt racism and bigotry, a concern for the middle class—while thrusting a knife into the back of the underclass for their corporate masters. This game has ended.

There are tens of millions of Americans, especially lower-class whites, rightfully enraged at what has been done to them, their families and their communities. They have risen up to reject the neoliberal policies and political correctness imposed on them by college-educated elites from both political parties: Lower-class whites are embracing an American fascism.
Here's the link.

True these lower class whites (mostly) were lead down the merry path by the college "elites", but these are also the same guys who voted against their interests on almost everything (Obamacare, Social Security, etc.) Sided with Reagan who started altering the system into strongly favoring the elites. Jumped on the Teabagger bandwagon pushed by the Koch Brothers (the 1%er's answer to James Bond villains). Sided with the GOP on the disastrous (in humanitarian/economic/moral/security terms) invasion/occupation of Iraq which led directly to the current boogey man of ISIS/ISIL/Whatever they call themselves. Also don't read enough or want to educate themselves.

I'm not saying the Dems didn't help. They did, but they were less poisonous than the GOP was.

They remind me of a coworker who rants about immigrants once in a while. He's mad that he lost his well paying job at a now closed factory. It wasn't immigrants who decided to move production to the States. It was the (mostly) white executives who did it in part to cover up their ineptitude/bad decisions. Instead of being mad at them, he's mad at some guy who wants the same things he has ( a home, a job and a means to live.)

As bad as Trump is, Cruz is worse. part of Cruz's platform includes banning all rights for a woman to choose, removing all rights BGLT people have; making "Christian prayer" the rule in schools, public institution, etc. Then when you add in, he would be able to "anoint" the next Supreme Court Justice, the U.S.A. would be in real trouble.

Trump may be crazy, but Cruz isn't and that makes him way scarier.

Cruz is so unlikable that even if he wins the GOP mom he won't get much support outside of his base. Even then he has made a lot of enemies within the senate among HIS own party in a mere 4 years.

Pols have to have some charisma and he has zero.

hi TS... I honestly believe that only a massive sense of inferiority or inadequacy can explain the way Trump behaves. He will say or do anything to have people affirm his worth, or make him feel bigger than he himself feels. That's his problem of course. But if he was President with his tiny fingers on the nuclear button, it would become our problem....

hi anon 4:24...I don't think I'm demonizing Trump. I understand the forces at work in America that have made him so popular. I thought the article I linked to, although way too long, explained how fear has some striking back at a world that is changing in ways they don't like. I think if progressives are going to fight people like Trump effectively, they have to understand what's happening, and tailor their messages accordingly. For I believe that quite a few of Trump's supporters, if they better understood what is really happening, could be convinced to vote for Sanders instead...

hi e.a.f...I completely agree with you, Cruz would be even worse. But that's good. For the weaker the Republican candidate, the more easily the Democrats will defeat them...

hi Dan... yes, apparently Ted Cruz is just about the most unpopular person in Congress. Everybody who has ever met him absolutely loathes him. Even his college room mate says he would vote for anyone rather than Cruz, even if he had to choose the name at random from a telephone book. Please Lord Democracy make him the Republican nominee...

An Authoritarian Leader often shares many of the same prejudices as an RWA but instead of being a follower is totally amoral and unscrupulous, usually likes inflict pain and has a massive urge for power. They are very happy to exploit a RWA but does not really share many of their beliefs. They are scary.

Rarely one gets a Authoritarian leader who is also a RWA. Then we get a person with a massive urge for power while sharing an RWA's beliefs.

I have not read the political scientists listed in the article you quote but I suspect that they have based their work on Altemeyer's original research and theories. The article does not actually talk about authoritarian leaders but it is the combination of an Authoritarian Leader and Authoritarian followers that is really, really scary.