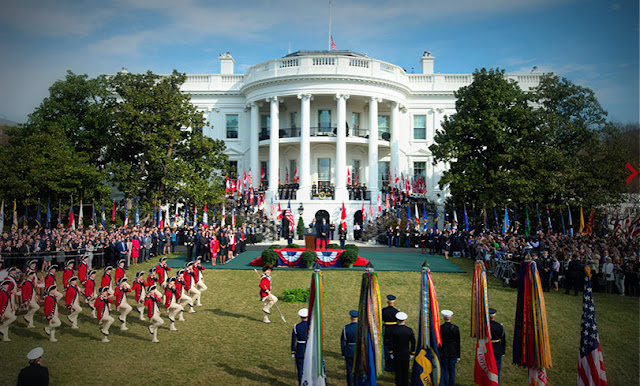 Justin Trudeau's visit to the White House yesterday had an almost dreamlike or fairy tale quality to it.

Like a fairy tale it all seemed too perfect to be true.

And it was a bromance. 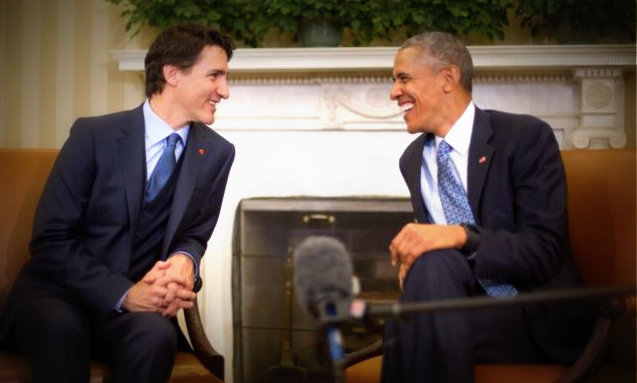 But as Paul Wells writes, Trudeau also used the occasion to blitz Washington, lobby the powerful, and in the process outline an ambitious agenda.

Other Canadian prime ministers have had announcements of greater depth to make when visiting their U.S. counterparts, but I don’t recall an agenda of such breadth.

It was a blitz. In Ottawa now and then, associations representing real-estate dealers or cheesemakers or research scientists sometimes organize “lobby days,” where they descend on Parliament Hill by the dozen and meet Members of Parliament in groups of four or five to plead their case on their pet issues.

The goal is to accomplish through sheer force of number what is normally hard to do: to imprint a group’s hopes or worries on the capital’s entire legislative class. This was Justin Trudeau’s lobby day in Washington.

And as Tim Harper writes, after the grim Harper years Trudeau's celebrity status is also raising the profile of Canada in the United States. 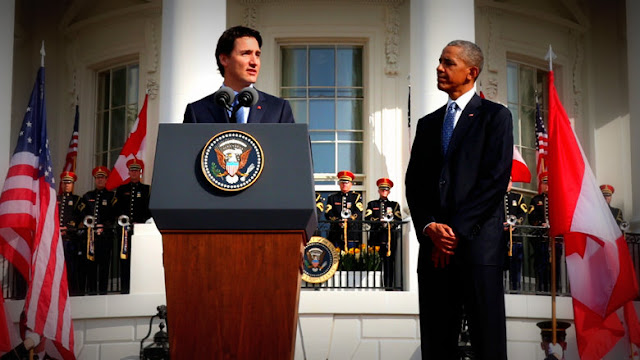 Without being noticed in the United States — politically or culturally — little of substance or positive value for this country will flow and that is the biggest takeaway from this week’s Washington invasion by the Canadian army headed by Prime Minister Justin Trudeau.

But Obama and his Secretary of State John Kerry did much more. The president lavished praise on Trudeau, saying he’s never seen “so many Americans so excited about the visit of a Canadian prime minister.’’

Because in the U.S. style counts.

This will be a tough couple of days for the Canadian cynics who deride Trudeau as all style, but they will be missing the value of style in politics.

It is what the U.S. understands. Dismiss showmanship at your peril because without it, we are nothing more than squabbles over softwood lumber and country-of-origin labelling. It may not last. But right now it is a win for Canada.

But sadly, even though it is a win for Canada, Rona Ambrose just couldn't restrain herself from coming out swinging in the Commons yesterday. 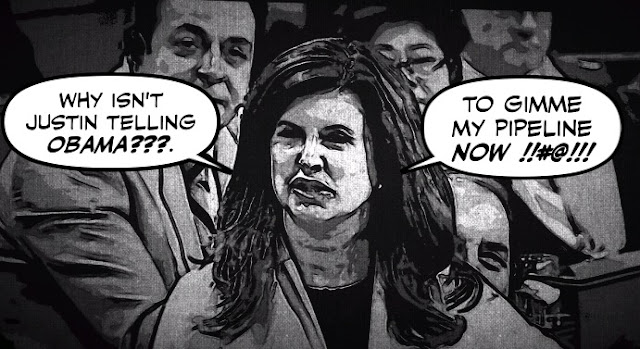 In a manner which made me question her judgement and her sanity.

And mocking Jim Carr the Natural Resources Minister, for not having been invited to the state dinner.

Natural Resources Minister Jim Carr was left to mind the store Thursday as several key cabinet ministers geared up to sip champagne in Washington. For his trouble, Carr was ridiculed for not being invited to the party.

As only a Con could.

But then no doubt what's really bothering Ambrose is that Trudeau is so popular.

And that unlike him, her fallen leader was NEVER invited to a state dinner... 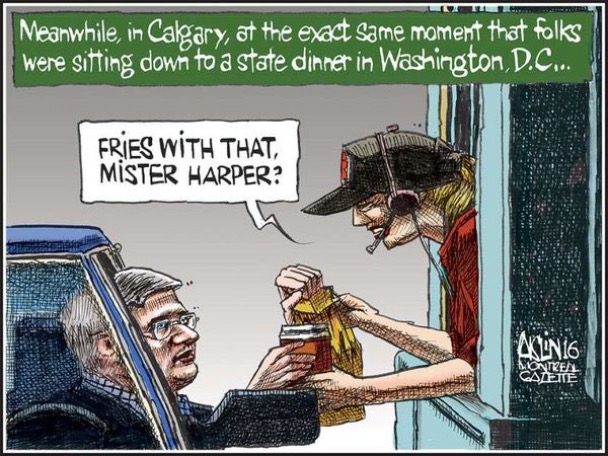 For as I pointed out yesterday, obvious reasons... 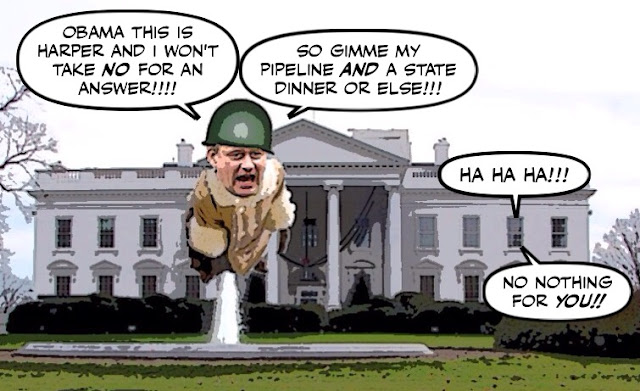 It is now obvious Obama really had no interest in Stephen Harper and the steady legion of gloomy Keystone-whiners landing at Reagan Airport, injecting themselves into what was considered a domestic U.S. issue.

And who is now no doubt just as bitter as Ambrose is... If not more, much much more, for he really has been humiliated. And the sight of Justin Trudeau getting such a warm reception must be driving him CRAAAAZY.

But what I loved best about yesterday's visit to the White House was that it gave us not just a chance to tell the Americans that we're back, and that Harper is history.

And not just a chance to showcase our new Prime Minister. 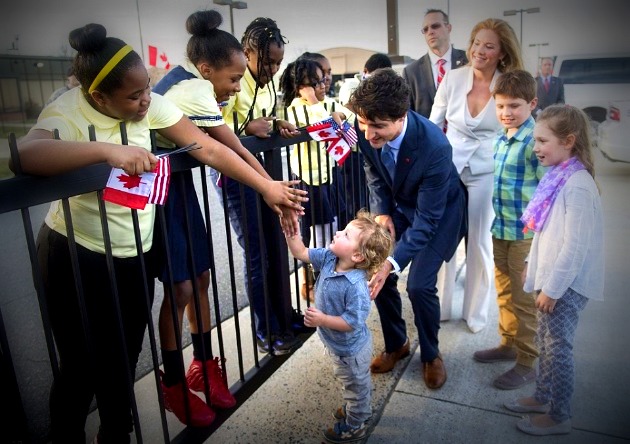 But it was also a great opportunity to show off our kinder, gentler Canadian values, in a country where intolerance is raging.

For I can't think of a better way we could help our neighbours at this troubled time in their history.

As well as help ourselves and our country recover from the horror of the Harper years.

Yes, it may be too perfect to be true.

But if this is a fairy tale, may it last as long as possible... 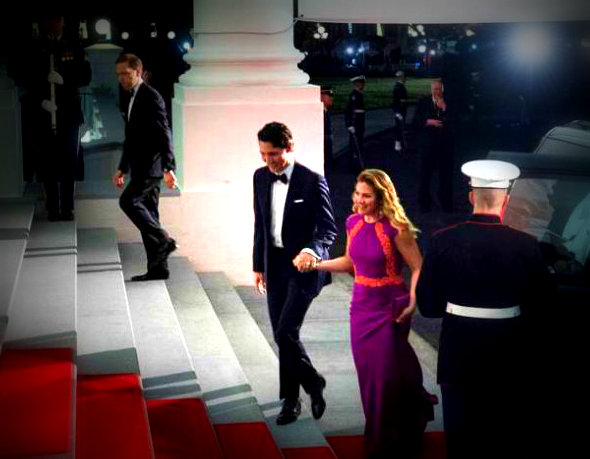 Because I'm enjoying every minute.

Trudeau and his princess Sophie are representing us well.

And I've never felt prouder and happier to be a Canadian...

Amen to that Simon. As the Cons were gritting their teeth and babbling like idiots, I to was full of pride to see our new PM put us back in Washington's good graces. A renewed sense of hope for the future has erased most of Harper's hateful, divisive, fear mongering rhetoric, and not having to look at his cold dead eyes as he droned out his bullshit is a gift from PMJT that will not be forgotten. Canada rocks!!!
JD

I'm still shocked that ambrose wasn't coughing up blood because she, as the obviously-most-important-person in Canada was purposely overlooked by the entire amerikan government on the invitation list. When she/it was poking fun at some other minister about that same thing, did anybody remind "little miss insignificant" that she was in Ottawa and not D.C. on purpose?
A big, fat pot calling the kettle black if there ever was an instance....

Photo of Trudeau's with DC school children is my favourite.

Thank you Simon. It shows an angle of little Hadrien that I didn't see in other footage.

PM's first speech to a U.S. audience: Let's not live in fear of the world
http://www.ctvnews.ca/politics/pm-s-first-speech-to-a-u-s-audience-let-s-not-live-in-fear-of-the-world-1.2811265

The subtext was clear enough. The prime minister used a late-evening talk to lament the danger of isolation, in a country gripped by heated election debates over banning Muslim travellers; refusing Syrian refugees; expelling Mexican migrants; and cancelling trade deals blamed for sending jobs abroad.
"It becomes easy to be fearful," he told the gathering, hosted by a progressive think-tank at an art gallery near the White House and attended by officials from both countries, including Canadian cabinet ministers.
"It becomes easy to turn in on ourselves. But we know from history that it's much more important to turn outwards. And to draw out the best of each other. And to understand that whenever people get together regardless of how different they may seem there are always more things that we have in common."

John: "There is no fear in love. But perfect love drives out fear, because fear has to do with punishment. The one who fears is not made perfect in love." (1 John 4:18)

Yoda: "Fear is the path to the dark side. Fear leads to anger. Anger leads to hate. Hate leads to suffering."

An 11-year-old Justin Trudeau told a reporter his favourite Star Wars movie was Return Of The Jedi. But on December 14/15, Trudeau tweeted: "There's been some confusion in the media over which Star Wars film is my favourite. When I was a child, I spoke as a child! But Empire Strikes Back is my true number 1. This clip from May 2015 should put the controversy to rest." The tweet links to:

(At American University today, Trudeau said he was a Star Wars and Star Trek geek)

I just love how smitten your are with Trudeau and the Liberal party in general, Simon. Tell Sebastian I'd like him to give you just one more kick for voting NDP last October. You more than deserve it! :)

No, you don't. There is a class line. (And I'm as happy as anyone else to see the back of Harper).

who cares what ambrose has to say about the Washington trip or who went or didn't. She is so yesterday's news.

any time Canada and its P.M. makes the Daily show in such a positive way we're doing well.

He's so dreamy, my eyes roll too.
Rona

hi JD...it really was a great show, and the whole Trudeau family deserves to be congratulated for representing us so well And that includes young Hadrien, whose dash fro freedom across the White House lawn, pursued by his nannie and two grim looking secret service agents, was absolutely delightful. You know, I used to say that it would take years to repair Canada's image abroad. But Justin has managed it do that in just a few months. Talk about a fairy tale ending to the Harper nightmare.I still can't quite believe it...

hi anon...I know, can you believe it? She can say what she wants, but it's still the same old Harper Party, as mean and as crass as ever....

hi TS...yes as I was telling JD, I was most impressed by Hadrien's performance. He had Michelle Obama wanting to adopt him, and carried out his diplomatic duties in a most impressive manner... ;)

hi David...thanks for the links. And yes, as I said in my post, what pleased me the most was being able to showcase our values, at a time when the Americans most need them. What a difference a few months can make....

hi Omar...well Seb would never hit me, but I have had to put up with quite a bit of ribbing from him and other friends. But as I tell them I was prepared to vote for anyone but Harper, and would have supported the NDP just as strongly if they had been elected. Although if I had known what a good Prime Minister Justin would be, I would have voted for Adam Vaughan instead of Olivia Chow....

hi lagatta....Omar is right. Justin Trudeau has stolen my heart. ;) After the grim Harper years he is such refreshing change. I realize that there are class issues, but a good heart can make up for a lot of things....

hi e.a.f...well she is the leader of a party that she claims has left its past behind. So her crass performance does at least tell us that nothing has really changed....

A friend received an email from someone who said: "Oh sure he's [Trudeau] a good speaker, but when is he going to perform??"

So I told my friend to forward this to the Trudeau skeptic:

What automatically comes to mind:

Here is a summary of global warming and climate change myths, sorted by recent popularity vs what science says. Click the response for a more detailed response. You can also view them sorted by taxonomy, by popularity, in a print-friendly version, with short URLs or with fixed numbers you can use for permanent references.

2. Restored Canada's credibility on the world stage; has already met with several world leaders
3. Tax breaks for the middle class in new budget
4. Restored Canada's relationship with the US (our largest trading partner); Harper's relationship with Obama became toxic
5. Cancelled the anti-union legislation that Harper rammed through just before the election
6. Will restore funding to CBC TV/Radio, which aids in unifying our country
7. Will re-open most if not all 9 veterans' offices that were closed by Harper
8. will restore funding to First Nations educational system
9. brought in 25,000 Syrian refugees through a highly secure screening/security process (99.9% families)
10. Canadians can breathe again! There is a different tone to the country (except for the whiny, far-right screech of the Conservative howler monkeys during Question Period)
11. Equal number of men and women in cabinet
12. Withdrew the 6 CF-18 jets, which were basically a "symbolic" contribution in the war against Daesh/ISIS. These jets accounted for only 2% of the coalition's aircraft missions.
13. Increase humanitarian aid in the Iraq region and triple the number of military advisors to assist the local military in intelligence gathering (satellites) and training. You can't win a war with foreign troops. Ever hear of Iraq War I and !!?

Green Party leader Elizabeth May was right when she said in the House of Commons (Oct. 2014): "Without disrespect to any of us, bombings have never ended an Islamic or any religious extremist terrorist threat. Time after time it has made matters worse. Let us try to look to the lessons of history before we go to war again."

Wait for the budget...