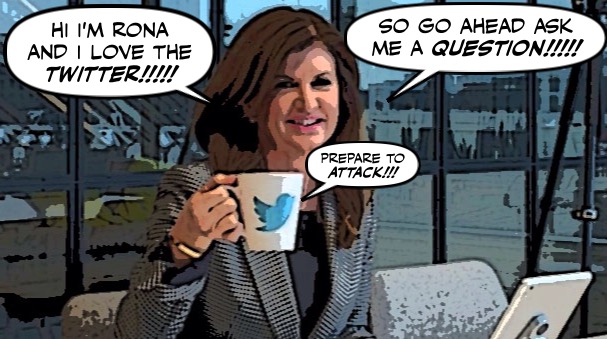 The other day I wrote that although some Cons may have taken down the Progressive Blogger site.

Twitter is still standing and it belongs to us.

So when I saw that Rona Ambrose was inviting Canadians to tweet her their questions.


Hey everyone, I’ll be @TwitterCanada HQ tomorrow for a Q&A. Send your Qs using #AskAmbrose. Hope to hear from you! pic.twitter.com/caZi4r2cPC
— Rona Ambrose (@RonaAmbrose) February 29, 2016


After I stopped laughing, I predicted disaster.

For although The Droner did manage to fire off some talking points.

To satisfy her depraved desire to bomb anything that moves.

The question and answer session was an absolute train wreck. 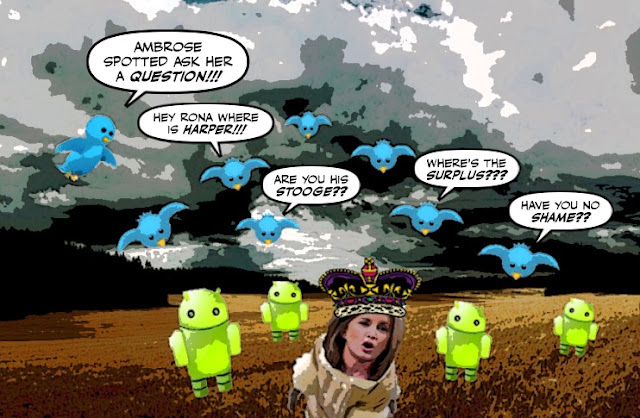 The hapless Ambrose couldn't or didn't dare answer most of the questions.

And the Twitter experiment couldn't have been more embarrassing.


Which had some Canadians wondering who on earth is whispering in her ear?


While others wondered why she would make such a fool out of herself?

And sadly for her, the answer to that one is obvious.

The first week in the wake of the government announcing a budget deficit higher than estimated during the election has had no negative impact on Trudeau. More than one of two Canadians (53.5%) prefer Trudeau as Prime Minister while 13.9% prefer Ambrose, 10.9% prefer Mulcair, 5.0% prefer May and 15.9% were unsure.

Justin Trudeau just keeps getting more and more popular, while The Droner is going nowhere.

Isn't that nice to know?

And isn't this good to know?

It will help destroy her... 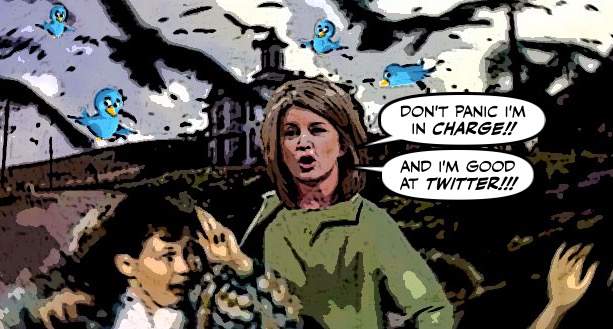 That's hilarious Simon. She should have let Michelle Rempel answer some of those after she downed a litre of wine, "wass a con tent in parlamint? Yoo canned camp dare". "Vick can sit my baybies anytimes, hee's uh reverend"?
Twitter's not for twits Rona.
JD

This is typical Reformacon stunting. Reminds me of Harper's price is right sketch with the annoying cash register.

I bet she had already arranged to answer only prepared questions from Conservative trolls with fake Twitter accounts. Her twitter stunt was anything but hosting atwitter session.

I'm sure it'll get lots of play on Power and Politics with Rona today though.

hi JD...please don't tease me with the image of a drunk Rempel slurring her words on Twitter. That would be too good, and I wouldn't be able to enjoy it because she has blocked me for no good reason. I've never sent her a solitary tweet, but maybe she's seen some of the graphics I've made of her, and doesn't think she looks good in that furry monkey coat. Why? Why? Why are the all Con clowns?

hi anon...you're right it was a set-up. She only answered questions from Cons while ignoring most of those progressives sent her. It was as that article said a real train wreck, and only made Ambrose look even more pathetic. Especially the one about gay marriage which she says she now supports, after voting again every LGBT rights bill that was ever tabled. ..