Stephen Harper and the Tale of Two Cartoons 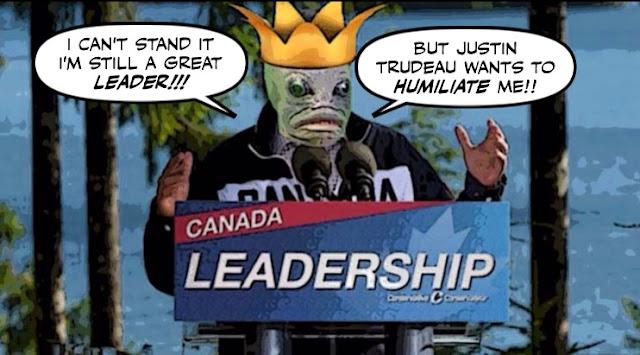 They say a good political cartoon can be worth a thousand words.

So now that we know that Stephen Harper is in a foul mood, and snapping at all those around him.

Because just the thought of being humiliated by Justin Trudeau is driving him CRAAAAZY.

I really like the way these two cartoons work together. And then this one... 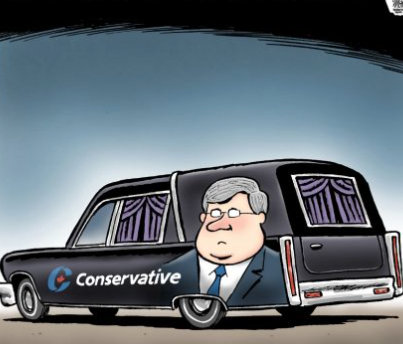 Won't that be a beautiful sight? And in just four days time.

Great cartoons Simon. First JT knocks King Steve off his throne and then he's carted away in a hearse. I'd even pay to fill the tank, ka-ching!
JD

I'm with JD on this one!
I tried commenting on a few postings on FB today and got knocked off site........Surprise.....not a bit!

Hi Simon, have you seen this incredible story of the Ford brothers for attacking Justin for a joint at a dinner party?

The hearse is funny, but I'd rather just political death. We need Harper alive to meet his just desserts.

We fit the definition I hope.

As Paul Wells (Macleans) pointed out on The National tonight, on Sept. 14 the Cons removed the word "Leadership" from Harper's lectern. They knew it was going to be a hard sell.

Harper is caught between a rock and a hard place if her doesn't cozy up to the Ford Brothers, but also shows how desperate he is.

hi JD....yes I really liked the second one. And I've been thinking what I might do if I saw it glide by. Should I whistle Dixie, or moon it, or both? ;)

hi Kathleen...you got knocked off the Con FB site? That seems strange. Although I know that the Con trolls are all over the internet and no doubt up to no good....

hi lagatta...yes it really is outrageous, one used to take crack, and the other has been accused of selling drugs in his younger days, so it couldn't be more hypocritical or absurd. But the good news is that any association with the Fords is going to hurt Harper all over the country. And no I don't want to see Harper dead. Merely carried off on a stretcher, dressed in a sturdy straitjacket...

hi Steve...yes I agree, and I like that picture of Justin. However my favourites are those of him throwing his baby up in the air. Although he really shouldn't do that, because if he dropped the baby it might be fatal for the baby and him. The decent old Robert Stansfield once dropped a football and it cost him the election. But dropping a baby would be worse...

hi David,...yes that's interesting. I wish I could have been a fly on the wall to hear them discuss that one. Their campaign really is a mess, and hopefully it will end with a train wreck on election night....

hi David...he is indeed caught between a rock and a hard place. He needs those Toronto suburbs, but I think the move could cost him support all over the country. It has the feeling of the straw that broke the camel's back, by reminding Canadians of all the sleaze in the past...

OMG! Enough to turn one off 'Bacon'!