Stephen Harper and the Monstrous Enemies of Israel List 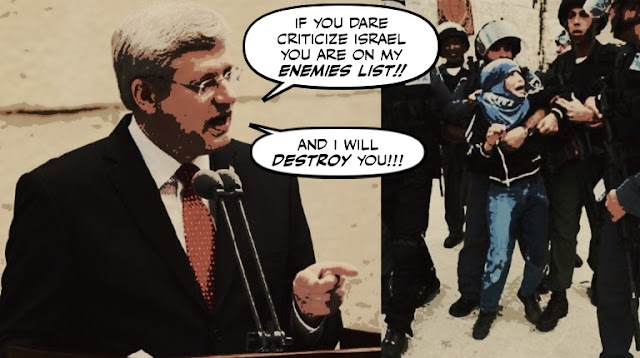 Well we've always known that Stephen Harper has a long list of enemies, real or imagined.

And we also know that he will do or say anything to pander to the right-wing Jewish vote.

But this combination couldn't be more disgusting.

A Conservative incumbent sparked boos at a debate this week after reading out a list of Liberal candidates and volunteers she identified as "enemies" of Israel.

But those jeers reportedly turned to cries of "shame" when Joyce Bateman, running again in Winnipeg South Centre, got to Andrew Leslie, the Liberal candidate in the Ontario riding of Orléans.

"It is hard in retrospect to escape the feeling the "enemies of Israel" blacklist Bateman was reading had a McCarthyesque blush to it," Lett wrote. "The names were read quickly and without any information establishing the veracity of the charges against the individuals named. It was a truly creepy moment."

It is McCarthyism, it is creepy, it is shameful. 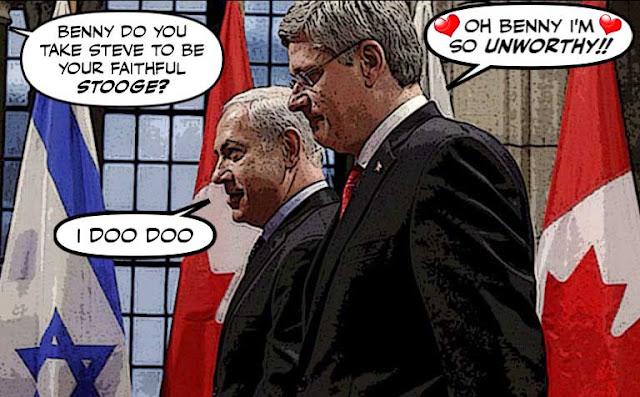 Even though he is no real friend of Israel, with his brutish and un-Canadian opposition to the peace process.

But then I do understand why Harper is so desperate.

Leslie is considered a star Liberal candidate and a new poll suggests he may unseat Tory incumbent Royal Galipeau.

I would like to know who in the PMO prepared that list of enemies, and how many other lists are there out there? I think we all should.

And I do like what Leslie once said about the Con attacks he knew were coming his way.

At the Liberal convention in 2014, Leslie said that while Conservatives tried to recruit him to run under their banner, he opted to go with the Grits because he wanted a leader he could follow "heart and soul."

Leslie said at the time that he could withstand attacks from Tories because he has been "shot at by real bullets."

And since Netanyahu won his latest election by turning his campaign into a steaming cauldron of fear and loathing.

These two cowardly bigots deserve each other... 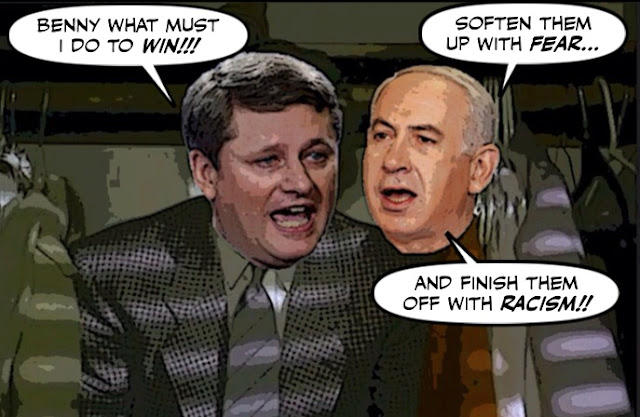 But of course we deserve better.

Please do what you must to defeat this monstrous low life leader.

Before he declares war on all decent Canadians...

Thanks for this blog Simon. It is quite clear that Harper is following the course of the Israel and UK elections by dividing the population, appealing to the fanatics and right wing reactionaries and then scaring the remaining public with tip lines and people who can't be trusted because they have hidden faces. They hated the black bloc too at the anti austerity and anti Capitalist rallies who hid their faces and there is nothing more Harper would like than put those people in prison for the rest of their lives. The Liberals (not Harper) have destroyed the NDP chances at forming a government and I'm not sure the Liberal vote will be as solid as necessary. Harper is well on his way to a large minority/bare majority government at this point. Progressives must continue to point out what Harper has already done to Canada. The days of specific election promises that the public forgets soon after should be over. I think the only way to defeat Harper is to further motivate the anti Harper vote, whether it be Liberal or NDP to get out and vote. Here in BC, except in Vancouver city the fight is between the Conservatives and the NDP. If people drop the NDP in BC the Conservatives will pick up those seats for a federal majority. So people have to continue to vote NDP in ridings where the NDP are in the lead in the polls to keep Harper from forming government.

How can Canadians of Jewish ethnicity who support Harper be comfortable with the proposed Con tip line?

Conservatives continued to focus on controversial issues of identity politics ahead of tonight's French-language leaders debate, pledging that a re-elected Tory government would establish a tip line for reporting "barbaric cultural practices" to the RCMP and would increase funds to help international organizations fight against forced marriages of young girls.

In Nazi Germany the police were allowed to arrest people on suspicion that they were about to do wrong. This gave the police huge powers. All local police units had to draw up a list of people in their locality who might be suspected of being “Enemies of the State”. This list was given to the Gestapo – the Secret Police. The Gestapo had the power to do as it liked. Its leader – Reinhard Heydrich – was one of the most feared man in Nazi Germany. His immediate chief was Heinrich Himmler. Both men ran their respective branches with ruthless efficiency.

The long history of Zionism in Canada
http://yvesengler.com/2014/01/07/the-long-history-of-zionism-in-canada/

Yves' newest book is now available and he is touring across Canada. Yves will be speaking on the following dates:

When Steve goes all anti Muslim and Arab all you really have to do is substitute the word Jew or Black, or Asian in for Muslim and/or Arab. Those who support Steve and his anti Muslim routine had better be careful. Its a very slippery slope to go down and it might stop at your door. You maybe come the enemy of Steve and the Cons.

Canada is a secular country yet religion has played a larger part in this election than any I can remember in my life. Jews ought to remember Canada refused to accept Jews prior to WW II. It happened once and as Mother said, it could always happen again. Right now Steve wants to be the friend of Jews just as he wants to be the friends of Ukraine. Now what if he had to make a choice?: Who would he choose? Jews or Ukrainians? Something to think about when you go to vote.