Stephen Harper's Most Miserable Halloween Ever 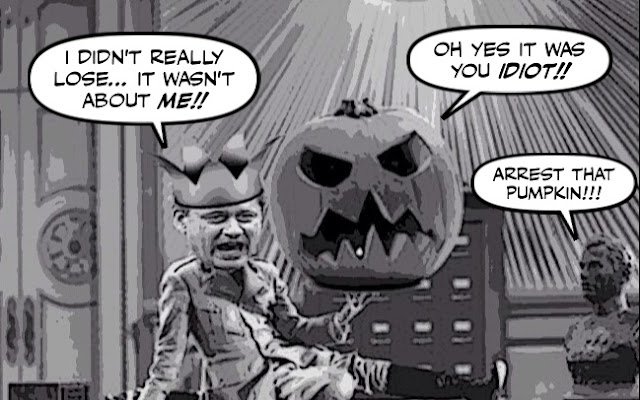 Well as you can probably imagine, Stephen Harper is having a very miserable  Halloween.

After seeing his plans for Total World Domination, turn into a pumpkin.

And his plans to buy the election fail so disastrously... 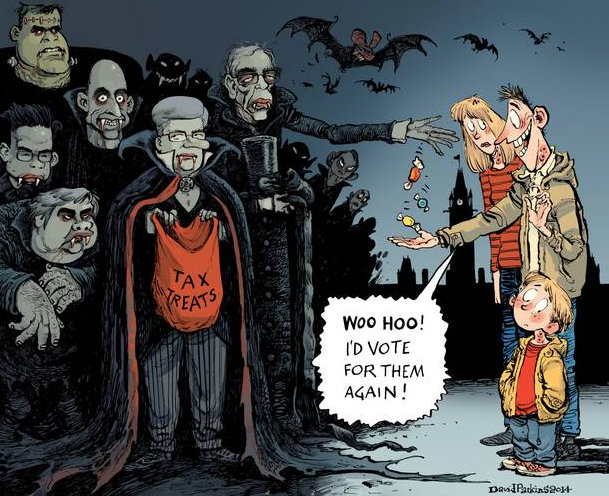 And I'm pretty sure you won't see any young Canadians going trick or treating dressed like this... 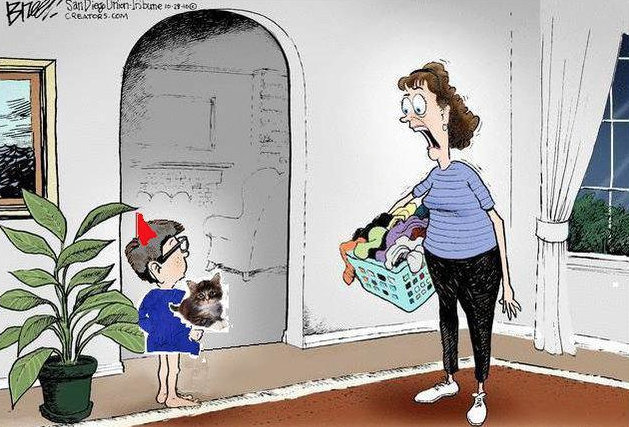 Because it's so YESTERDAY.

And so is the Jason Kenney costume... 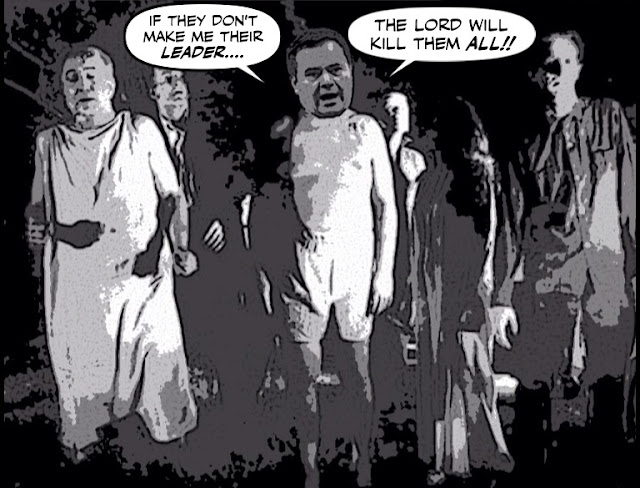 But luckily you don't have to go dressed up as Kenney, or a Con zombie.

Press Progress has provided a handy list of suggestions on how, for almost no money, you can dress up as a scary Con clown.

And for a few more dollars you can always buy yourself the Pierre Poilievre as Norman Bates costume.

And at the very least scare the hell out of Michelle Rempel... 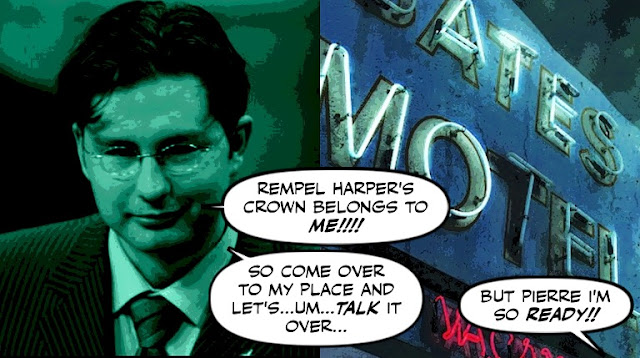 But of course what's scaring Stephen Harper, and making him keep such a low profile he rarely leaves his crumbling mansion except at night... 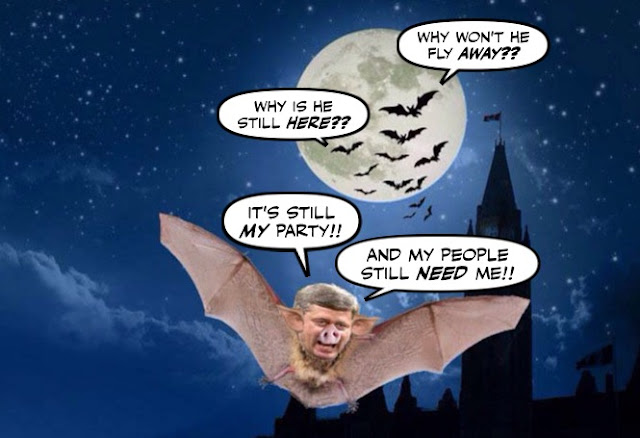 Is not all those Cons going after his job, because he's sticking around to make sure the winner works for him.

And I'm sure it's not this latest scandal either.

At the time the arrest last year, a spokesman for Harper said the prime minister hadn’t known about the investigation and was “shocked and disturbed” by the charges.

Because he's hanging on to his parliamentary immunity, in case the Duffy trial comes back to haunt him... 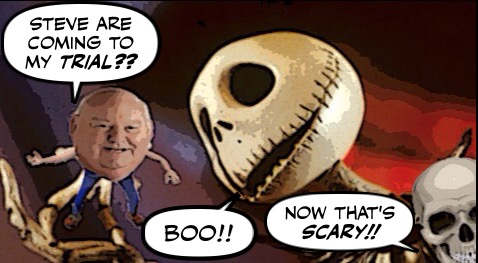 And it's probably not even the rude pumpkin telling him the ugly truth... 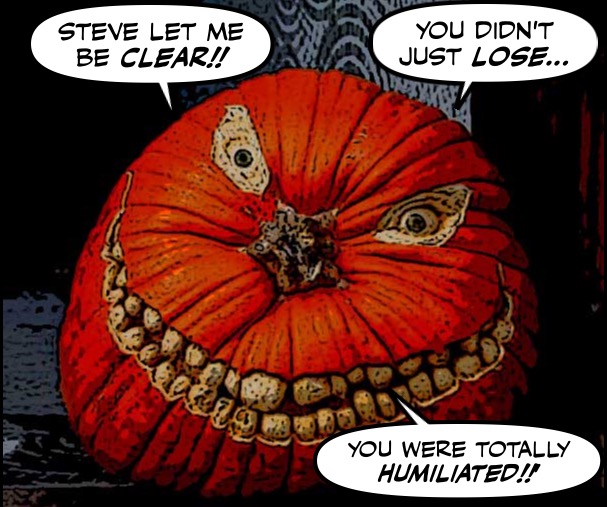 The ugly truth he doesn't want to hear.

It's this living nightmare... 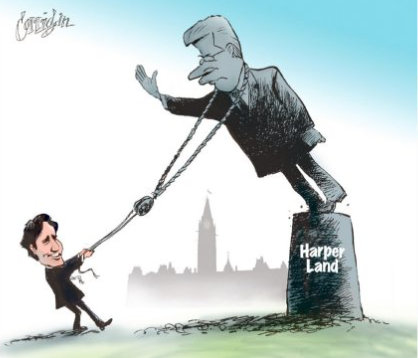 The end of his reign of terror, at the hands of the Son of Trudeau.

And the end of our long nightmare... 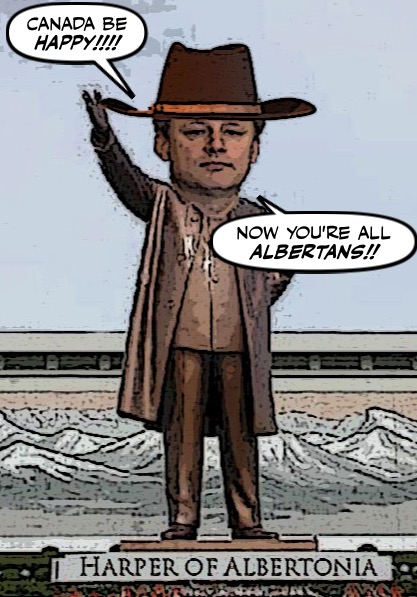 Poor Steve, he had such big dreams.

And plans for such big monuments.

Only to end up with this one... 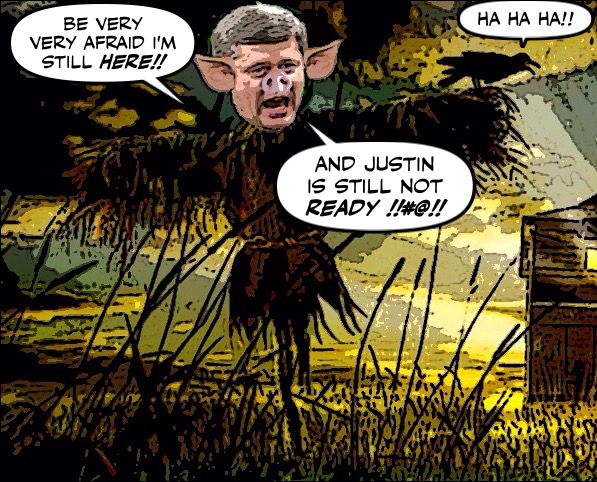 Which is still scary, but only if you are a bird.

His days of terrorizing Canada are finally over.

Could it have ended better?

One of your other readers pointed out the other day that heil harper may not be able to use the parliamentary immunity thing even if Parliament is in session because of the nature of this investigation. Is that right? (I hope! I hope! I hope!)
If it still covers his worthless, fat ass we need to get that changed so criminal actions can't be shielded by this sort of 18th century bullshit any longer!
Happy Halloween! I'm dressing up as a much-relieved, much happier Canadian voter whose vote actually counted this time!

Have you seen this? http://www.pressprogress.ca/watch_wildrose_mla_harper_esque_outburst

It's OT a bit but funny.

It seems to suggest the weird alternate university of the Cons still exists in Wild Rose Country. Fildebrant is the Wild Rose Party's financial critic, I believe.

Fildebrandt is quoted saying the NDP duped Albertans by actually following through on their campaign promises.

"He cited the government's decision to increase the minimum wage as an example. The NDP campaigned on a pledge to raise minimum wage. The MLA, however, argued the NDP never planned to follow through on its promises."

I'm dressing up tonite as the creepiest monster ever most disgusting you've ever seen you can see him in the HuffPo Harper loves Nazis link:

And I got my creepiest monster mask on. Now thanks to you bro Simon if you look at the picture in the link I posted that's my monster mask. Only cause of you I added your pig's snout how about that? Think I can creep people out? I'll having em run away from me so fast I'll need an F-35 to catch em eh?

THIS FOOL - the Harperman - RAN a country (into the ground) - do u think it was cuzz HE DIDN"T KNOW?? ... OR SOMEONE LIED TO HIM?? ... or SOMEONE FORGOT TO TELL HIM?? ... HOW did HE manage to stay Prime Minister for so long if he couldn't remember or He didn't know a friggen thing?? ... WE KNOW HE CHEATED and LIED and probably even CRIED to the WORLDS LEADERS ... MAYBE he can make ALBERTA his own country, considering he is so loved there, and they want to rename the airport after him ... Best one was Stephen Harper International Terminal = S.H.I.T. ... that would be the only way I would vote for a change LOLOL ... THANKS for posting the info on Philip Nolan ... I found tons of articles but never about WHAT his DEMISE was ... AND of course, xPMOcchio DID NOT KNOW ... Maybe his GAWD covered Steve's eyes and ears when ALL of these things were happening?? ... YA, that must be it (NOT) LOLOL ... HE is almost the POOREST EXCUSE for a human being EVER, HE even takes first place over his twin brother BiBi ... no wonder they love each other so much LMAOOOOO ... Excellent article, and the pictures are awesome ... I can't draw a strait line with a ruler LOLOLOL ... TY

I love the tax treats cartoon, hilarious yet ironic. Brilliant. Thanks Simon and have a great Halloween.
JD

hi anon...yes I saw that, and I hope that reader is right. I don't expect Harper to ever pay for his role in that scandal, our justice system is too weak and corrupted by ten years of Con hugger. But anything that embarrasses him further, and taints his already sordid record to an even greater extent would be most welcome....

hi jrkrideau...thanks for directing me to that link,. No I hadn't seen it but I can't say I'm surprised. I call the Wildrose Party the Wildhog Party, and it represents the very worst of the political culture in Alberta. They claimed they had turned over a newel, well so much for that....

hi Mogs....I can't see the link, but if it's got a snout I thoroughly approve. ;) I don't have a costume this year. Seb washed my homemade pirate costume and it shrunk, so now I can't get into it. !!#@!!!

hi Ty....well at least he's on his way out. I am counting the hours until he finally resigns. If I had any money to spare I would bribe the priest at the church in my neighbourhood to ring the bells at the appointed hour. But it will still be a great moment anyway....

You didn't miss anything the link contained a picture of Harper: