How to Use Strategic Voting to Defeat the Bigot Cons 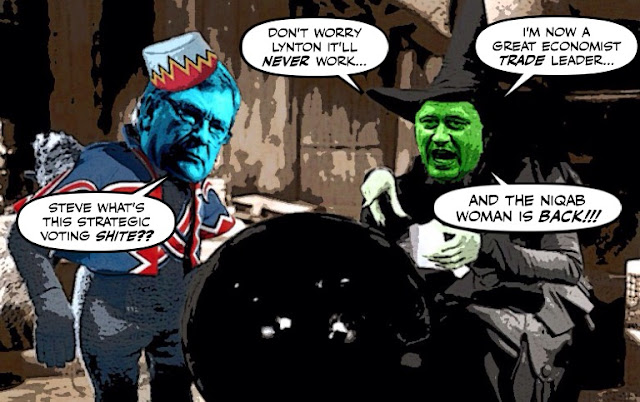 Stephen Harper and his Aussie attack monster Lynton Crosby must be delighted.

Not only do they now have the Trans-Pacific Partnership deal to wave around as a shiny bauble to try to distract voters.

The niqab issue is back in the spotlight.

The Federal Court of Appeal has denied the application for a stay of the Federal Court ruling in favour of Zunera Ishaq, clearing the way for her to wear a niqab during a citizenship ceremony.

So they can hope to keep riding it to victory. 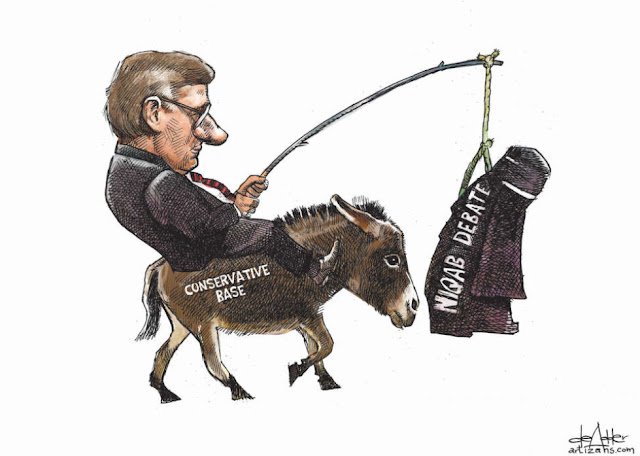 Conservative Party spokesman Chris McCluskey told CBC News in an email, "We are disappointed in the court's decision, especially as we were waiting on the Supreme Court to hear our appeal.

"We have committed to rectifying this matter going forward by introducing legislation that will require one to show their face while swearing the oath of citizenship. Legislation will be introduced within the first 100 days of a re-elected Conservative government."

No matter what it costs.

The identity issue playing out in election debates and in courtrooms is now being felt in the streets, shopping malls and on social media, as disparaging remarks and even outright assaults draw attention to a charged political environment.

Or does to the fabric of our society.

But there is one thing that must be setting off alarm bells in the PMO. And that's the threat that millions of Canadians are prepared to vote strategically. 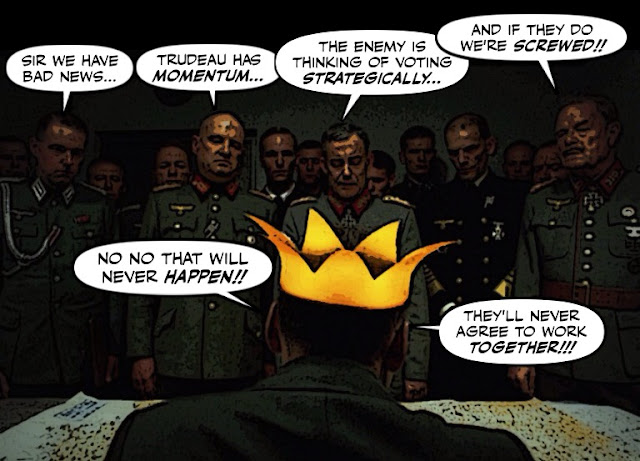 And with good reason because it's a real and growing phenomenom.

Everywhere I go I keep getting asked will strategic voting work? And how can I be sure that I am supporting the right candidate in my riding?

So I'm glad to see that Christopher Majka has written a short guide to the art and science of strategic voting.

And the bottom line is that informed strategic voting can work, and these are three steps you can take to inform yourself:

1) Check the results of the 2011 election. See how the respective parties did. This is no guarantee that what happened in 2011 will be repeated, but it is a comparative indication of the respective strengths of political parties in the riding.

2) Check with VoteTogether.ca. This is the single most important resource at your disposal. Use it.

VoteTogether has targeted 72 key Conservative swing ridings (where Conservative incumbents won by narrow margins) where progressive Canadians can defeat the Conservatives if they vote together. It's no exaggeration to say that this would fundamentally change the outcome of the election.

(3) Use your own resources. Ask around in your community and riding. Get a sense of how people are feeling. Look at the number of lawn signs. Talk with fellow progressives. Use the intelligence that you have about your community. You know it best.

It's really a simple as that.

The latest CBC poll tracker still shows that Stephen Harper is still a long way from a majority. 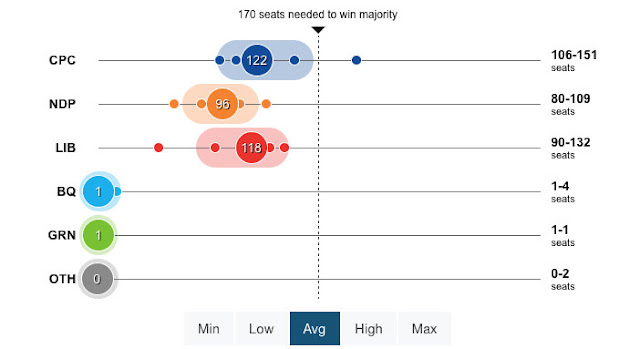 So if we can steal even a handful of seats from him, he'll NEVER get there.

And we can give him and his ghastly attack fiend Lynton Crosby the shock of their lives... 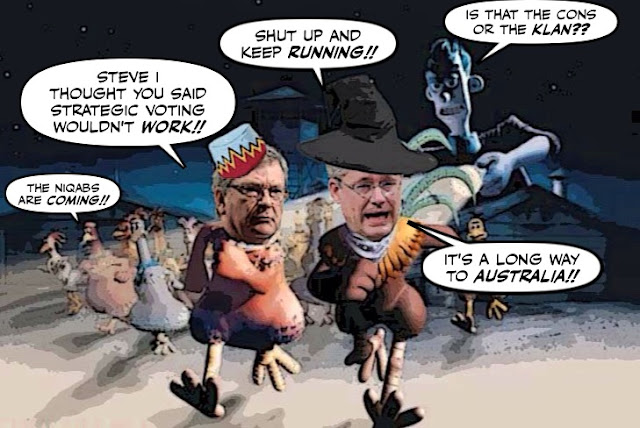 Unite to fight the politics of fear.

And send those ghastly bigots back to where they belong...

This TPP thing should be used as the weapon it truly is against crosby/harper. This bill is going to crush the dairy and automotive industries here and gawd knows what else. How the hell can anybody in their right mind consider this a good thing? The u.s. sold out a ton of their decent paying jobs in the 80's-90's with this kind of insane logic and look how well that's working for them and now we're following suit and that's supposed to be good how? I know you don't support it, Simon, but "we" had better get our act together damn quick or we won't have a country to call our own, and damn soon!

Yep, we need to repeat 2 messages to those voters who are like us and have our job number one as removing Harper and replacing him with ABC. These messages are:

(2) Ignore the calls from opposition party partisans that encourage you to vote for their party based on the National polls, or because Trudeau/Mulcair is evil. First, these national polls are conflicting because they are often not carried out competently; some are perhaps even borderline fraudulent and could even be designed to sway votes to a certain political party (called push polls). Second, even if carried out competently, these national polls are still not as relevant as the the poll for the riding that one lives in (again, the local riding polls are provided by Vote Together in the link above: see point number (1). Third, these partisans are obviously more interested in gaining political power for their respective political party than in heaving Harper; in fact, given the mutually destructive attacks the Liberals and NDP had been carrying out on each other, these people could actually help Harper win or cheat power again.

In summary, if SV works to defeat as many Cons candidates as possible, there is not a hope in Hell that Harper can win, unless he gets away with cheating again (which is another issue albeit a distinct possibility given his track record of having cheated in every election since 2006).

Excellent article Simon! With all the smoke and mirrors that have been in play we also need to be reminded that no one should vote for the Cons on the basis that we simply cannot trust a government that has demonstrated repeated corruption at the highest levels of office and has repeatedly attacked our Charter of rights and freedoms. This is despite the fact that it illegal to do so without first stating in parliament that the proposed law runs counter to those rights. I get it that some people might think that their views out weight the Charter but why would anyone vote for a corruption plagued government that has a pathological penchant for bending the truth. Perhaps a post reminding us of the corruption and those that have been victimized for standing up to the Cons would be beneficial before election day.
RT

Rather disgusting to see a Con MLA in Montreal making anti-gay remarks and another Con MLA in Mississauga sounding off in such a disgusting way against Nunavut. Completely pisses me off to see this type of shit in this day and age. But I take some comfort in the knowledge that according to the polls I've seen theses two ass clowns don't have a hope in hell of getting elected.

I find this more informative than Vote Together.