Stephen Harper and the Harperendum That Will Destroy Him 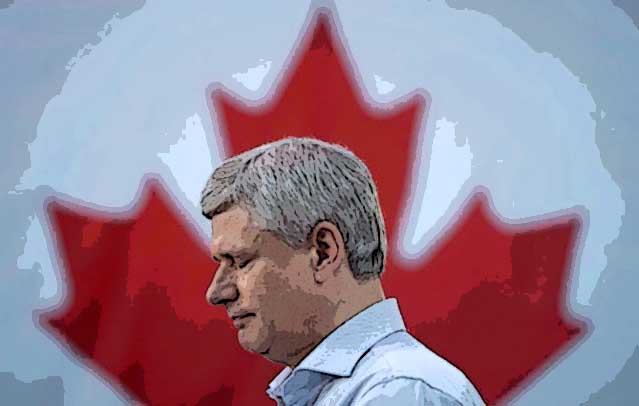 He closes his eyes a lot these days. And it's hard to say whether he's still sniffing for a majority. Or whether he's praying for deliverance.

His new ads that are now saturating the airwaves claim that it's not about him.

It is all about him, and it is as Don Martin writes, a Harperendum.

The party leaders would have you believe there are dueling platforms at play as the longest campaign in any living Canadian's memory comes to a close. They are wrong.

In reality, it's a referendum. The ballot box question is simply 'Stephen Harper: Stay or go?'

And with just three days to before the election it's one Stephen Harper is losing. For the latest polls show him losing ground to Justin Trudeau.

Justin Trudeau’s Liberals have enjoyed a surge in voter support in the closing week of the election campaign and have strong momentum as Canadians prepare to cast their ballots Monday, a new survey conducted for Postmedia suggests.

In one poll after the other.

And so grim is Harper's situation, that Jeffrey Simpson is already looking ahead to what might happen to the Cons when their Great Leader is gone. 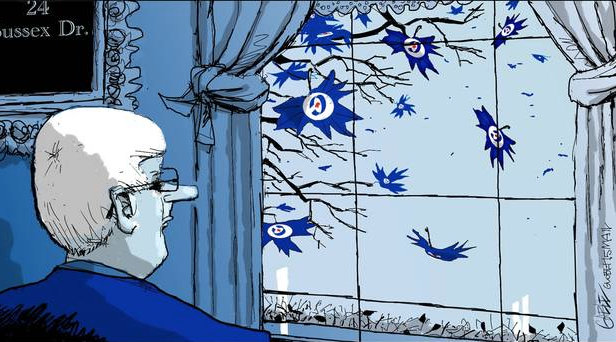 The Stephen Harper years are over. Either his Conservative Party will win a small plurality of parliamentary seats in Monday’s election, but then be defeated in the House of Commons, or his party will win fewer seats than the Liberals and hand over power. Either way, time will soon be up for the Prime Minister.

But of course the Cons are still very much alive, and still up to their dirty tricks.

So we all need to focus on getting out the vote, and making sure that none are wasted by voting strategically in ridings where that can make a difference.

As well as remaining vigilant, because Harper is now so desperate... 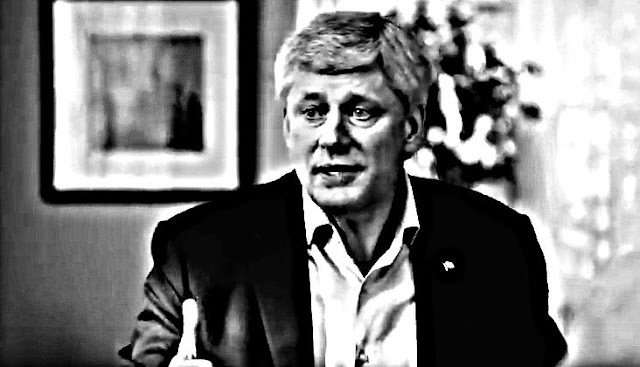 He is quite capable of trying to steal the election.

But the best news is that failing that, it does appear that his day is finally done. His iron grip on power is indeed turning to rust.

Two days to go and, at last, hope that what has to happen if this country is to recapture its integrity is actually about to happen: that Stephen Harper and his scurrilous despotism are about to get the heave.

And not a moment too soon.

One of the more disturbing last-minute insights is from Kevin Page, the former parliamentary budget officer. He says any new government will likely find the public service a total wreck, with “services not kept intact” and “the process completely broken” as Harper “balanced” his budget by not spending departmental funds. That makes getting Harper out all the more urgent.

Shredders have been spotted parked outside his office... 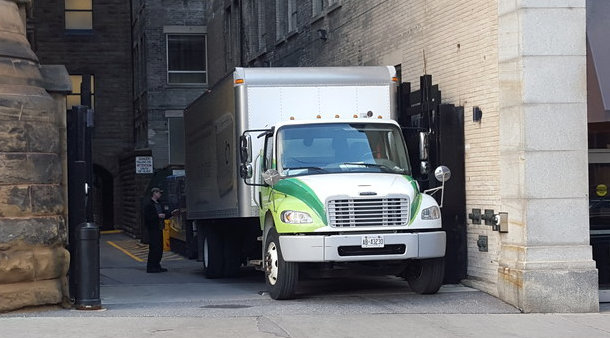 He is so desperate that he will be rubbing shoulders this evening with Rob Ford. 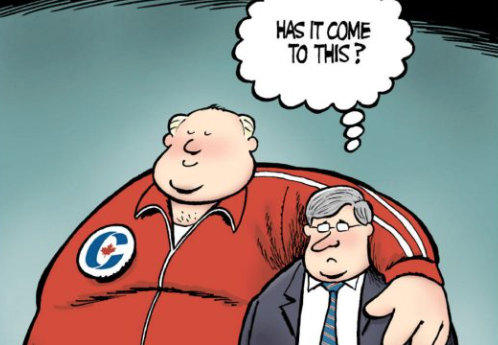 And degrading himself further.

You know, I'm having trouble believing that the day I have dreamed about for so long is now so close.

But it is a Harperendum.

After all those ghastly years his time has finally arrived.

And we are going to destroy him..

Lets ensure we vote on Monday to make him gone and that promises are kept to ensure the voting system is changed so that minority groups cannot hold the majority of voters captive in the future. Our multi party system is a democratic strength and will serve us well in facing a rapidly changing future but not when it allows a far far right ( or left ) minority group to capture the government and then change the rules so that they cannot be displaced. The reformist Cons didn't have enough time to permanently change the system but they certainly demonstrated that it could be done under slightly more fortuitous circumstances. Lets ensure that their time is up on Monday.
RT

The RCMP needs to put a total lockdown on the PM's Office to prevent anymore shredding . I don't just want to see this coward defeated, I want him gutted....humiliated...and only then can this Country start to fumigate the stench of this mans rule from our nation.

Yup.... looks like a minority Justin Liberal government coming... and possibly a majority depending how the voting is distributed.

The Harper hating Dippers are flocking to Justin and abandoning Mulcair .... which tells you a lot about their socialist political morals..... because a Liberal PM Justin will be even worse for Canada than the Con Harper government.

Current government benefits that directly lower taxes will be cancelled and Liberals will raise taxes and then funnel the money back to Canadians they deem worthy of the largesse.

Then the Liberals will impose a "Green Shift" Carbon Tax to force Canadian companies and in particular AB oil & gas industry to buy Kyoto-style Carbon Credits.... from China and also from Hydro-Québec which has hydro generated electric carbon credit status.

Dion's Green Shift had $50 Billion of carbon taxation over 4 years.... and that meant about $5 Billion for H-Q carbon credits and another $5 Billion from China to build more brown coal-fired power stations spewing incredible pollution... and these power stations were to be built and managed by a Quebec company (PC). The brown coal was to be shipped by another Bermuda-based company (CSL) around the China Sea and into river-based power stations.

The result will be higher taxation on all hydrocarbon based products (gasoline, heating fuel) which will be passed on to the consumer, as well as all the other Liberal tax hikes and deficit financing, which will result in increased unemployment among the Harper-hating Justin-voting Millennial Generation X (18-32 y.o.) who will bear the blunt of the economic disaster we are heading into.

Greasy Justin will be a lot worse than horrible Harper.... and the strategic voting dumb Dippers will be to blame for destroying Canada.

Nothing like a tired old bitter Tory.....cheese with that whine?

Hi Simon, I want to thank you from the bottom of my heart for your blog , so many times I felt like it was hopeless and that we would never be free of Harper.I would turn to yor blog and it would always cheer me up! Finally, the end of Harper is here! All the best to you Simon, and all your readers! Let the celebrating begin!

Perhaps the Libs will not improve on the Cons dismal economic track record over the past 10 years but I have confidence it will not be any worse and as a bonus they will reverse the chipping away of our democracy in order to replace it with a divisive authoritarian style of government with a democratic veneer. Granted the Cons still had a way to go but their actions clearly demonstrated the end goal. Some have attributed this to Harper's personality but the party needs to get back to its progressive conservative roots before deciding on which party is best suited to help shape Canada's economic future.
RT

I've written to you before about the unresolved UN Treaty Canada has. Problem is, if Canadians do not immediately attempt to publicly advocate for the identified victims who remain living who are Canadians and those still living who are from other countries - all requiring Canada to resolve Treaty to obtain international surgical referral - then people in Court will prove Canada cannot be free to accept help from International Agencies and USA in Agreement Act, for not having done enough to try as a country.

Please ensure someone influential reads this. There are Senior Fellows at CIGI who have been illegally holding up Treaty resolution with illegal protests who may not have given accurate information on appropriate procedure.

The Office of OHCHR can confirm. Waiting for Harper to be voted out is not enough!

The Alberta PC party went shredded paper crazy immediately upon their sound thrashing....To me, a shredding services blitz at 24 Sussex on the near eve of voting day tells me all I need to know..

From a future edition of the Stephen Harper Non-Answer Generator:

"When I told John Tory during the Toronto mayoral race [2014] that I was hoping he would win, and that the Ford brothers were a bunch of losers, I was joking."

“When Mr. Tory was running against Doug Ford, the Prime Minister and Laureen Harper were telling John Tory how much they wanted Doug to lose and that Doug and Rob were a bunch of losers, and they were hoping that [Tory] was going to win, become mayor of Toronto, and now [Harper] has resorted to the desperation of having Rob and Doug Ford in an audience, and a very small audience at that.”
(Bob Fife, CTV News, October 13, 2015)

I'm not a Tory... I'm a casual Dipper who understands what is happening behind the scenes in Ottawa politics. You on the other hand are a Dummy who just loves loves loves Justin and accepts the Liberal Masters of Corruption .... all because you hate hate hate Harper. Your head is filled with primordial feeeeelings and Canada will go down the crapper while you feeeeel satisfied in your hatred!

What in heaven is an " unresolved UN Treaty" you are talking about?

Since your concern seems to be international, maybe it's already time to see who will represent CA at the upcoming Global Warming Conference in Paris.

If a new gubmint isn't sworn in quickly enough, Harper could still be the one to attend. He would in all probability sabotage the thing, and enjoy to see the planed burning, like a modern day Nero.

After all, he possesses the believer's faith that his shitty little mean-spirited god will reserve him a place in paradise for having carried out his word. Is there oil and wars in Harpers paradise?