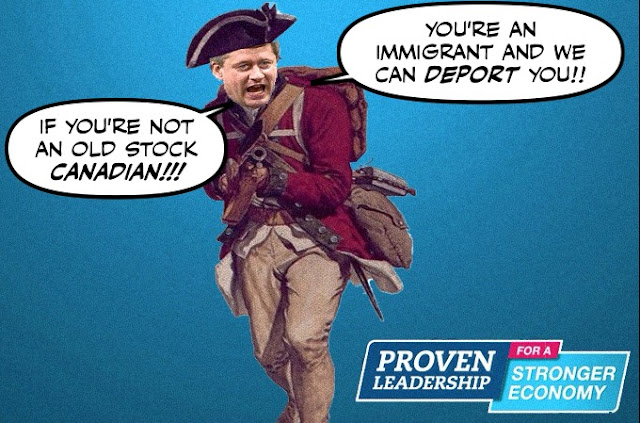 If anyone doubted that Stephen Harper's plan to strip the citizenship of dual citizens convicted of terrorist offences was a slippery slope, and entirely political, consider the evidence.

First the Cons announced that they were stripping the citizenship of a wannabe jihadi born in Jordan.

Now they are considering doing the same to one born in Canada.

The Harper government is attempting to revoke the citizenship of a convicted terrorist who was born and raised in Canada, Maclean’s has learned—a first under a controversial new law that has triggered intense debate during the election campaign.

Saad Gaya, 27, is believed to be the only Canadian-born citizen (terrorist or not) to ever face the prospect of being stripped of his citizenship. Until now, there was no legal mechanism to undo what has long been considered an irreversible birthright.

And as if that wasn't disturbing enough, now Harper says he may use those powers to deport other kinds of criminals.

A re-elected Conservative government might look to strip dual citizens of their Canadian citizenship if they commit other heinous crimes, Stephen Harper said in a radio interview Wednesday.

Lawton asked Harper if he might strip other dual citizens in the future if convicted of other crimes, giving by way of example a serial killer, a rapist or someone who did something to children. "Well, you know, obviously we can look at options into the future," Harper responded.

Which could include all kinds of other Canadians born in Canada, for crimes the Cons deem "heinous."

But as Jason Kenney was quick to point out, NOT those born in India or China... 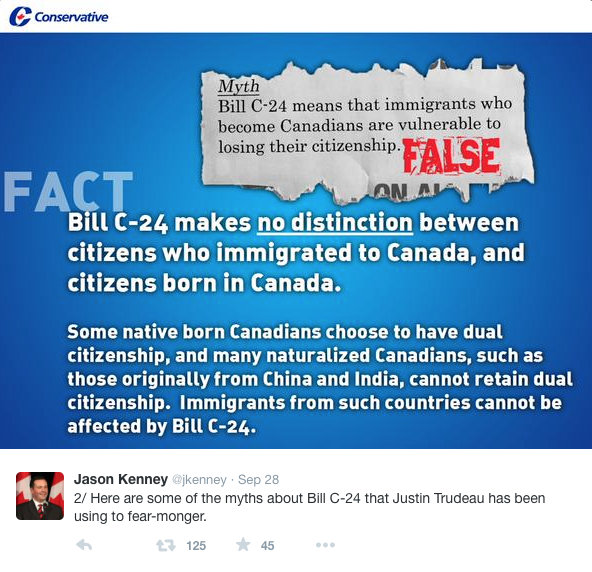 And why? Because those two communities are the ones the Cons have been targeting the most, and as Harper claims they share OUR  values.

As he shares THEIR values, and their pandas.

Which must surely take pandering to the ethnic vote to new heights, or new lows.

And the good news? As I pointed out the other day this is a projection of what's happening in ridings with large concentrations of Chinese-Canadian voters... 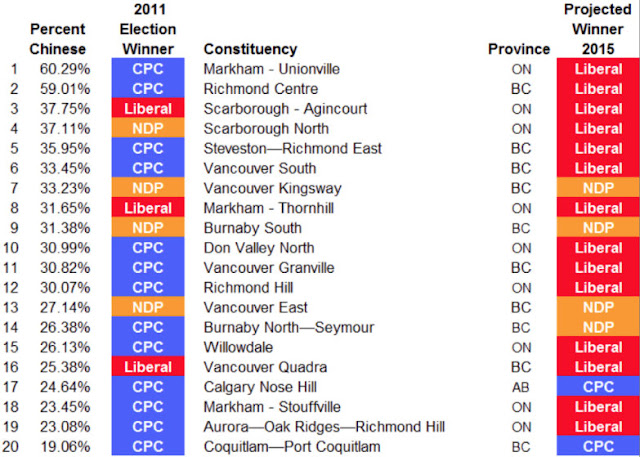 Which only makes this claim even more ludicrous.

In an interview with the free daily newspaper Metro, Harper said the rationale used by his opponents for opposing C-24 was a "kind of elite political correctness on steroids."

"We can't have two classes of citizens. What do you mean?" the Conservative leader asked rhetorically. "We can't have a class of people who are war criminals and convicted terrorists, as opposed to everyone else? Of course we have classes."

And makes him sound even more desperate... 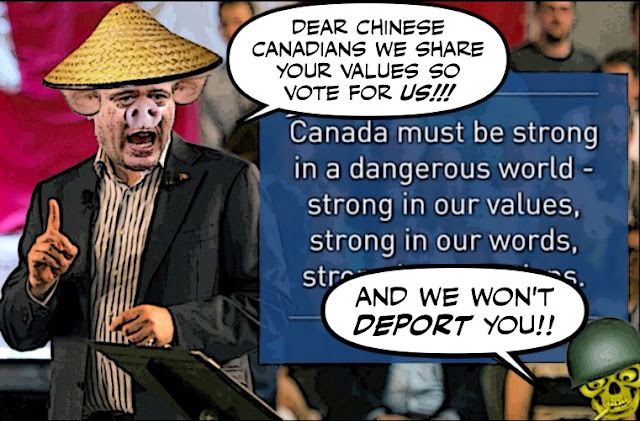 For if we have classes of people who have committed crimes against Canada, and its values.

Nobody deserves to be deported more than Stephen Harper and his foul Cons... 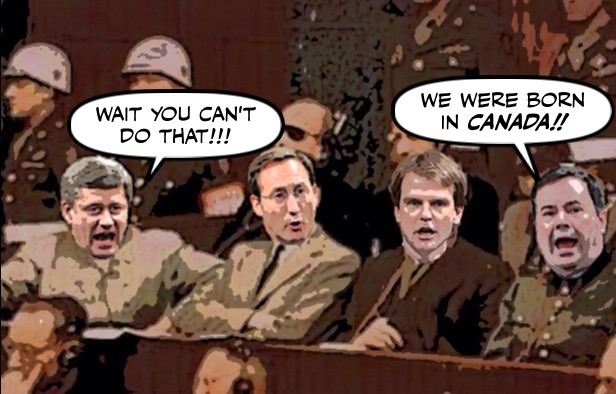 And we should begin that process the day after the next election.

For a criminal government that would deport immigrants and people born in Canada.

Is far too dangerous to be allowed to remain this country...

"I misplaced President al-Sisi's phone number, but was pleased to hear of Mr. Fahmy's release from prison, even though he had been a dual citizen. Seeking his release has always been a top priority for our government."

re: classes of Canadians.

Harper and Crosby must have re-read George Orwell's "Animal Farm" and are taking a page from the Comrade Napoleon playbook:

If you wait long enough all fashion comes back into fashion. I'd suggest the same is true in politics. At one time the british "exported" their "criminals" to Australia. Must be Steve had a chat with David Cameron, and given Australia won't take them anymore, they'll just send them anywhere they can.

From what I can see Steve's Canada does not include Muslims or Arabs.

Everyone ought to remember Steve could depopulate large areas of Canada with this new method, providing space for those he wants. We the trouble makers of Canada will be deported, one way or another. for those who don't think it couldn't happen to them or theirs, remember some of Steve's gang believe environmentalists are terrorists. So next time you protest in an environmental event, make sure you're not a dual citizen or some one who is Canadian by choice. You could find yourself on a jet to no where.

Steve is a dangerous man. He doesn't respect democracy. He doesn't respect those who do not believe as he does. That is very dangerous. People ought to know and remember he is a member of the Christian and missionary Alliance church, which believes the bible is inerrant. Now go have a read of that book. there are a lot of very f..ked up beliefs in that book. Steve's religion believes it all. Steve really isn't so different from the Taliban. Likes to drop bombs on people and kill some innocents along the way, at $90 per bomb, but providing clean water to all Canadian, not happening. The Taliban doesn't want women to be educated. Steve defunded women's groups once he became P.M. The Taliban likes to control women. Some members of Steve's party want to take choice away from women when it comes to their bodies.

If I were an Acadian I wold be checking the weather in Louisiana.

Yes, we have a Christian extremist as our PM.

Worse than not respecting democracy is that he has no respect or use for the rule of law applied to him and his actions, only when it is applies against those he wishes hit with all the heavy handed power of the State. This was why when the Grewal fraud was exposed I freaked out so strongly and would not let it go for long after it faded from everyone else's view, because it showed that Harper was not just an extremist ideologue, he was one with a willingness to ignore basic legal rules/principles to get what he wanted and when exposed pretend it never happened.

That fraud by someone within the CPC was a clear attempt at fraud and libel at the minimum, when you edit recordings to make false claims appear to be true "proving" a criminal act by a cabinet minister, the buying of an MP's vote with a Senate seat, you are dealing with some very heavy stuff there. When you are the LOO endorsing and vouching for the full complete and unedited nature of said recordings which then turn out to be anything but you are clearly in violation of some fairly serious laws. If he would go that far in opposition, it was obvious how much more dangerous he could be as a PM ESPECIALLY as a majority PM given how our system of government operates.

His contempt for the rule of law and the premise that no one is above the law, especially the PM (which was his position against the Libs while he was in Opposition, funny how that changed as soon as he became PM) is to my mind even more dangerous and problematic than his naked contempt for democracy, which is itself not a minor deal either.

Stevie and the Cons have been working the Toronto 18 file since 2006. Its proven to be a treasure trove of reasons to enhance the powers of the government over its citizens even if it meant subverting any journalistic investigation into providing a balanced picture of the case. Some 10 years later it just keeps on giving, not for some sense of justice but for sick political purposes. Its the same political BS that's turning our foreign diplomats into targets but without the high level of security offered to US diplomats by their government. Another set up aimed at more government empowerment and justification for turning our country into a military state. Who cares about the economy when we must spend hundreds of billions protecting ourselves every where we go. Its not that there are no dangers and we have played an important role on the international stage international stage in the past but the Con purpose and strategy is a whole different story. It has absolutely nothing to do with making the world a better place.
RT

If that panda piddles on on him will it be deported ?

hi RT....yes Harper has been exploiting the Toronto 18, even though those wannabe jihadis were absolute clowns. They were infiltrated from the beginning, and the police had so much tape on them they could have made a long movie or a television series out of them. But I have a theory about Harper's obsession with this case. I believe they were the ones who were threatening to behead him, it scared the shit out of him, and he's been scared ever since. While I on the other hand, even though I frequently pass the place where they were planning to donate their bomb or bombs, remained as cool as a cucumber. For unlike Harper the day a scummy terrorist scares me will be the day I die of embarrassment...;)

hi rumleyfips....worse, it will be made into a fur coat for Laureen to wear to the Bruce Carson fundraiser. I only wish they could bite...;)