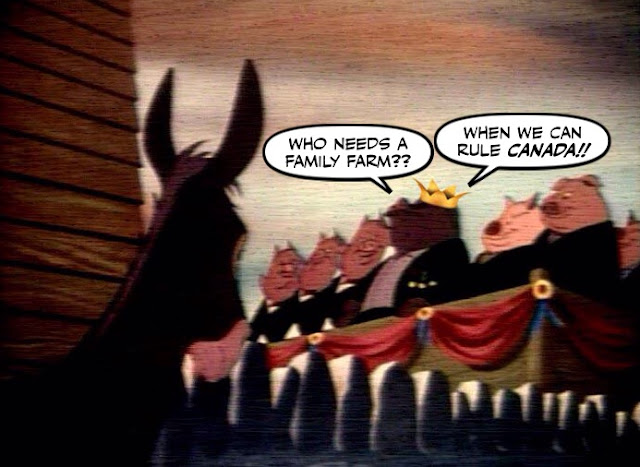 Well it took him almost ten years, to destroy Canada as we once knew it.

But I see Stephen Harper and his porky Cons have finally sold the farm.

A free-trade deal that opens a small part of the Canadian dairy market to cheaper foreign imports could spell the beginning of the end for the country’s dairy supply management system, and push inefficient farmers out of business, observers say.

And so much for our family farmers. 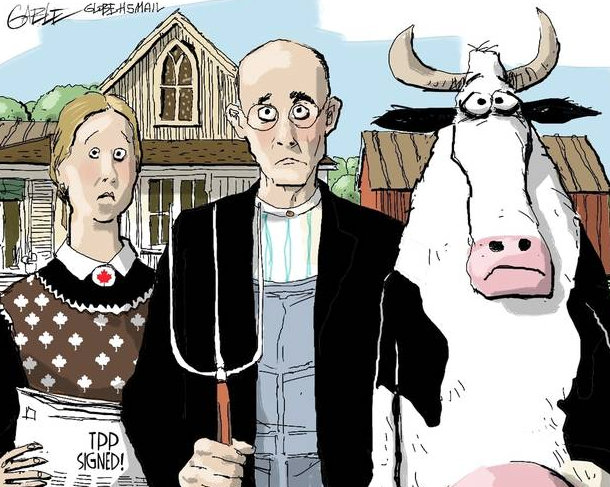 And no doubt, once we find out what's in that deal, so much for our auto industry, Via Rail, the CBC, our medicare system etc etc. And of course so much for our sovereignty.

But then, as Neil Young said, albeit in a Freudian slip, Canada is not a country it's a company.

And Stephen Harper and his backward regime are quite capable of selling us out to Big Business, in their never-ending attempt to turn us into a low wage paradise. And this rushed deal is just a desperate attempt to try to portray themselves as good economists.

Instead of the worst and most incompetent and corrupt government this country has ever seen.

But then of course I also know why the Cons created Bill C-51, so they could call anyone who disagrees with them a terrorist.

So I for one wish to hail our new multinational masters.

And declare that I can't wait to try those yummy dairy products from New Zealand...

You know, after seeing that, I can't help thinking that this new Con trade deal is like a container of yogurt left on the kitchen counter for a month.

Stephen Harper will use it to try to portray himself as a Great Economist Leader.

So I strongly suggest that we encourage Canadians to pry off the crusty lid in their dreams. 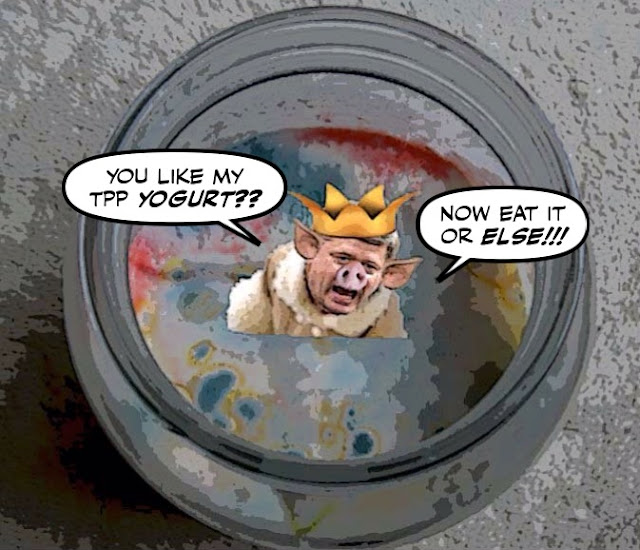 And of course encourage them to do the sensible thing.

Declare that both the yogurt and the morally depraved dictator are way past due.

And throw them both out...

They like to talk about how we pay higher prices than Americans do. But a lot of those American farmers are being gouged by corporate price-fixing, driven out of business, and replaced with corporate agriculture.

These free trade geniuses know the price of everything and the value of nothing.

From that Globe and Mail article:

The Dairy Farmers of Canada did not respond to interview requests. In a press release, the group said it is “disappointed” the agreement will give foreign dairy producers access to the 3.25 per cent of the domestic milk market, but called the compensation package fair.

“The milk displaced by this agreement will never be produced in Canada, and will result in perpetual lost revenue for our farmers, and for the Canadian economy,” the statement said.

Buying kiwis from NZ is one thing..........but dairy products is out of the question!

If the deal was a good one , we would know: Harper wouldn't be able to shut up about the details.

Harper wants to keep the details hidden, so I think it is a poor deal for Canadians.

Another Con wet dream. Sell our oil and other natural resources for pennies and buy back high value added finished products manufactured with our resources. Their economy grows and becomes more efficient as they develop new technology to transform those resources while Canada falls behind. Don't worry we can always sell off parts of our country to pay for the imbalance and I am sure Harper has a place for all the surplus workers in the military or the soup line depending on your preference. Vote Con and your meal vouchers will be in the mail the next day!

We should be levering the sale of our resources to develop our infrastructure and material transformation technology for the future. The Harper plan is to sell them for short term corporate profits and to finance increased military expenditures once his aggressive foreign policies achieve the desired push back effect. Its a simple strategy for a Great Economic Leader : Push= Push Back=$ increased military expenditures to keep us safe.
RT

Which enemies is Harper punishing with this deal. Quebec dairy farmers - once a racist always a racist. Southwester Ontario auto and parts manufacturer - oiymen hate manufacturing.

And , of course, Belinda Stronach.

Free trade deals, another Neoliberal tool. The global corporate elite must be dancing in the aisles. Harper is handing them Canadian Sovereignty on a silver platter.

Initially the trade deal will likely punish provinces with trade deficits; namely Quebec and Ontario. Eventually by squandering the revenues on international corporate profits and Harper's pet projects rather than reinvesting in our country everyone except the ruling class will suffer. The beauty is it will be all those left leaning provincial governments that are to blame... you know .. the ones he doesn't even bother talking to much less work with.
RT

who needs food security, lots of arable land being discovered every day. Why should Canadians have healthy GMO , steriod free food anyway?

Neo-rightists and their political proxies have their ideals and their practicalities. Ideally, national sovereignties would never be able to interfere, whether by taxing or regulating, with profiteering---thus we see many overtly anti-sovereignty policies being put in place, especially through trade deals. But it's doubtful, probably even undesirable from a neo-right POV, that every sovereignty will be eliminated entirely---remember: there's no honour amongst thieves, so the blinds that remaining sovereignties afford serve just as well to protect private interests from each other, as well as from the sovereign taxman, or from the democratic, sovereign citizen.

We're therefore talking about hegemony, not global totalitarianism. That still isn't a good thing for humanity, nor for Mother Nature, because, in the polluted state we find ourselves now---probably not even apprised of the half of it---small offences against sapiens and Gaia are nearing criticality, irrespective of the relative hegemony of stateless profiteers and neo-rightists.

Trade deal proponents will of course insist the ink and paper are invulnerable and immutable, the magic ingredient being "investment security." However, one should ask whether some hypocrisy has been salted into any deal in the event profitability for intended beneficiaries doesn't happen. The biggest threat, not just to profit, but to all sapiens' enterprise and free-natural processes and products, is environmental, not strictly economic, and, insofar as neo-rightism is preoccupied with the latter, it remains dangerously aloof to the former. That can't last.

When (not if) environmental degradation itself starts substantially threatening profitability of remaining hegemon interest (it already has substantially degraded profitability in interests they've already divested themselves of), many of these trade deals will be shown to be not worth the paper they're written on. Any sovereignty still hale enough to hasten the abrogation of un-environmental trade deals has only to deal with what's left of a moribund (and in denial about it)neo-right hegemon, and it must do it with what's left of its own sovereign strength. This is our dilemma in the post-industrial mess we eat, drink, breathe, and inhabit.

Sooner than later we'll all have to acknowledge that we've been bad, and---oh-oh--- Mom's real mad. Ain't no trade deal gonna save us from a good thrashing by her giant wooden spoon. The maddening thing is that profitability exists without trade deals; it exists with sovereign taxes and regulation; it exists in opportunities to stop being inhumane and anti-environment---meaning "profitability" sought by evil trade deals disguises a greedy cabal of spiritual midgets and intellectual dinosaurs, protecting nest eggs that, even if they could hatch, would be born to a world in which they couldn't survive, no matter how wealthy or elite. Greed simply cannot address the circumstances that threaten us and the natural world.

The hardest part is it's not in our social nature to afford elites what they need without allowing them too much without resorting to violence---and, at this critical point, this, our age-old habit, won't help.

All the comments seen from the Canadian dairy interests have reflected a narrow klepto-maniacal focus on how much of what is being extorted from consumers will be lost? and how much hush money is coming from the federal coffers?

There has been not a single whiff of seeing new opportunities in the new landscape. No awareness of the new markets that potentially could be sold to, nor thought given to what new products might be created in order to create jobs in Canada. Freer trade has a certain inevitability due to the creativity that is inherent in trading goods and services to buyers who have free will. The conversation coming from the dairy producers and processors is about a dismal zero sum view of the world where loss of former revenue is held up against increases in politically motivated pay-offs. Really Canada, we deserve more, but only when we wake up and earn it.