Stephen Harper and the Bigot Fires in Quebec 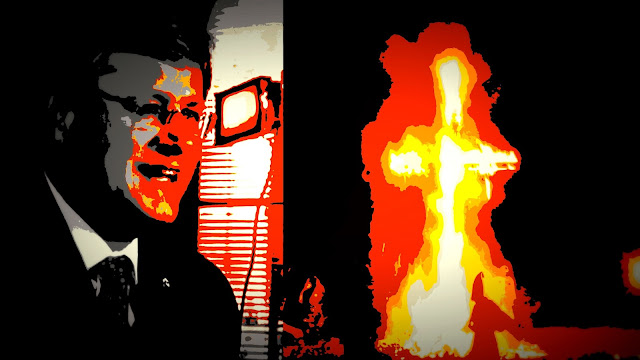 I warned long ago that if Stephen Harper was desperate enough he wouldn't hesitate to set this country on fire.

I knew that when the niqab court decision dropped into his lucky lap, Harper and his Australian hitman Lynton Crosby would use it as a massive wedge issue to try to poison this campaign,

And that's exactly what has happened. It has become the niqab election, or the citizenship election.

Emotion has replaced reason. The fires of hatred are burning bright, and nowhere more than in Quebec.

Quebec’s National Assembly made a unanimous call for calm in the midst of the federal election campaign as the province is again roiled by Islamophobia and at least one violent act targeting a Muslim.

Social media is a cesspool, people are getting attacked.

On Tuesday, Le Journal de Montréal reported that Oumessad Khoufache, 31, was walking to pick up her child at school when two boys on bicycles approached her, grabbed her hijab and knocked her to the ground. She’s four months pregnant. Her husband, Abdelhafid Ben Bellil, said his wife can’t stop crying and is afraid to go outside.

Which is to be expected when you run ads like this one...

And tonight the last debate of the campaign will take place in French, on the big Peladeau network TVA much favoured by the tabloid mob. So that will probably inflame the situation further.

For Tom Mulcair it will probably be the last chance to win over all those French-speaking voters who have abandoned him.

For Justin Trudeau it will be a chance to convince more of them to support him.

And there is no doubt what Stephen Harper will try to do judging by his latest posters... 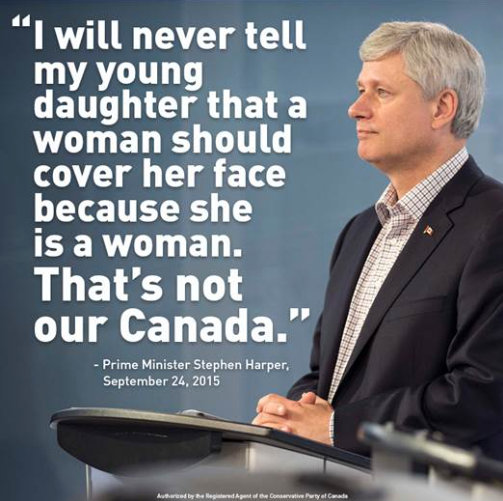 Pose obscenely as the great defender of women and children.

While going after Mulcair in this latest Con attack ad in a bestial manner...

(This ad was removed earlier today but I luckily I had a screen cap so you can see how grotesque it looked.) 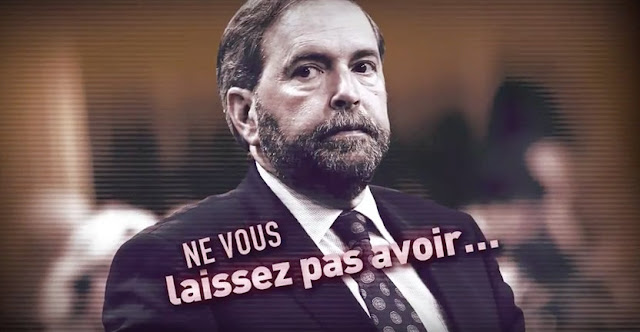 "Don't let yourself be had" it screamed. "The NDP is against open face citizenship ceremonies !!!!"

A reporter asks whether Mulcair is in favour of forcing women to remove their niqabs, he replies "no more than I would be of a law that would remove your press freedoms."

Before the ad ends with the stirring slogan "Only one party defends our values."

Which of course couldn't be more of a bad joke, but does tell you what kind of campaign we can expect from the Cons in the last two weeks.

And the good news? Both Mulcair and Justin Trudeau, who is also vulnerable on the same issue, now have the National Assembly's appeal for calm to use in their defence at tonight's debate.

They can accuse Harper and Lynton Crosby of dangerously inflaming tensions... 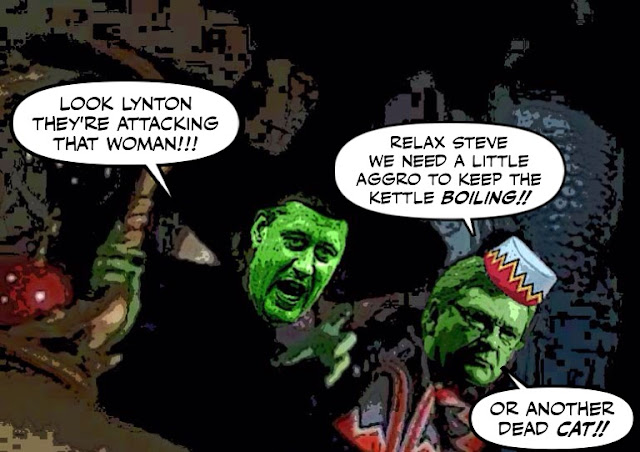 They can accuse the Cons of using ugly wedge issues to cover-up their ghastly record of incompetence and corruption.

Accuse them of trying to distract Canadians.

The niqab is a distraction – a culture war fabricated to take voters’ minds off the real and complex issues in this election. Don’t fall for it. Wearing a veil is one thing – wearing a blindfold is another altogether.

And of playing games with people's lives... 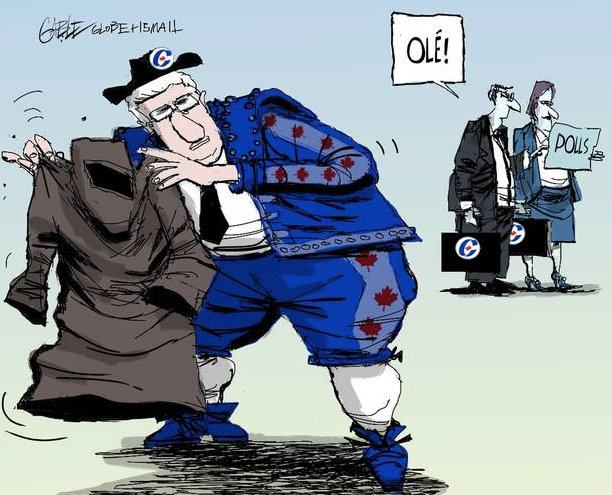 And it just might just defuse that issue, and put Stephen Harper on the defensive.

Now is the time to fight back.

For a leader who would play those games, is playing with fire.

The long standing conventional wisdom is that those who play with fire should prepare for their own inevitable self combustion.

Ok so Harper will never tell his daughter to cover her face, but would he ever insist a female cover her breasts at a public beach or anywhere else a man is allowed to go shirtless? What is his fascination with the amount of skin a female can show and why does it only apply to women? For example a full face beard in combination with long hair covers the same amount of face as some of the more open niqabs. No not a word about the minimum amount of face that needs to be exposed for identification purposes but its all about telling women what they can and cannot wear. Its inconceivable that any woman would vote for this man especially when he refused to attend the debate and explain his views on woman's issues? Look at history, women have always been a target minority group in the manly world of the retro-cons. No right to attend medical school until 1900, no right to vote until 1940's, equal wages??. Does anyone honestly believe the Cons lead the way or even supported any of these issues.
RT

Here is an article that explains, in his own words, who Stephen Harper's real enemies are:

Harper says he doesn't want to tell his daughter how to dress -- then why is this sociopathic, ignorant, racist, war-mongering, pig, worried - about what how other people dress..... we have no choice here.. we gotta stop this nut or .. we're done.. .

Polls are showing that Cons are slowly creeping upwards towards a majority government. I'm betting that Harper would easily retire in 2017 after the 150th Canada birthday festivities and going out with a bang.... to rake in Million$$$$$$ in repayment from his corporate buddies.

Another Con majority government might be good because it would finally destroy the Libs and Dips as stand alone centre-left parties forever splitting the majority vote..... and they are forced by necessity to merge into a single party to Stop-the-Cons.

"But Mr. Mulcair, never, never will I say to my daughter that a woman has to cover her face because she's a woman, even if she's a doctor or nurse in the operating room. This is Canada. We should not hide our identity."

now if only the women that heil harper and his ilk have always treated with such disdain will realize just what a vote for the harper crime cabal actually means to them and then use their heads and their votes accordingly....

hi anon...I've always believed that myself. I honestly believe that Harper's filthy game will in the end only tarnish him further. And make even more people want to get rid of him...

hi RT...Harper's claim that he is a champion of women's rights is absolutely outrageous. The first thing he did when he came to power was order that the words women's equality be struck from all the documents of the Status of Women. Followed by the destruction of the national daycare program. So with friends like that who needs enemies?

hi anon 6:20...I believe that most women support us, they being so much wiser than us men. They can see a phoney better than we can, and can see that the Cons are a party of good ol' boys. So I'm hoping they will come through big for us...

hi political junkie...thanks for the link to that post which is a good one. I am familiar with the Harper essay, and when I read it now, and see the expression "moral nihilism" I think he must have been staring into a mirror when he said that, because there can be no better description of himself. I sometimes wonder if Canadians had known more about the man's background whether he would ever have been prime minister. Too bad those that didn't had to learn the hard way....

hi jolly roger...needless to say I agree with everything you say. In fact I liked your comment so much I read it several times myself, and then read it to my friends. ;) He is a nut and we are going to stop him....

hi anon...well some polls are showing a slight boost, while others have the Liberals gaining momentum. But yes I know how you feel. It seems that only disaster will shake us up enough to finally unite the left. It is an insane situation. But the good news is that strategic voting will probably sink the Cons, and if the new progressive government changes our present FTP system to proportional representation the Cons will be reduced to a rump party, and we'll no longer have to fear another bloody majority...

But, Simon ..... with all respect.... your Lib-Dip coalition fantasy is just that, a fantasy because:

1. You assume that the Libs and Dips both hate Harper equally and will do anything to defeat him. Not so because Mulcair and Justin detest each other and any Lib-Dip coalition would likely collapse within days of birth. It would be a marriage made in hell....

2. The capitalist Liberals will never never support a socialist NDP government... never. And Mulcair will never play second fiddle to Justin... that would be uber-humiliating and untenable.

3. The socialist NDP might support the capitalist Liberals, but given the animosity between them it's unlikely to happen without the NDP fracturing and disintegrating into hardcore socialists and greedy unionists.

4. If there is a minority Harper government the Liberals would prop it up because the Libs can't go into another snap election due to lack of funds.. while the Cons will still have Million$$$ for another showdown election campaign. Is that Harper's default strategy to spook Canadians?

hi anon...look I never said it would be easy. Believe me I know. I have NDP and Liberal friends and when I criticize them they BOTH turn on me. So they are capable of having something in common ;) But you're mistake is assuming that the two parties are radically different, because whatever their partisans like to believe they're not. Mulcair has been taking the NDP to the right, and Trudeau has been taking the NDP to the left, so they haver actually never been closer. The only thing really different about them is the colour of their jerseys.
And the other thing si that while Mulcair and Trudeau might not want to cooperate, the pressure from progressives to do that, will give them no choice but to bend to that popular will,
And once they were working together, that same public pressure would keep them together. But we'll see, as they say, only time will tell...

We're past the absurdities. We have been for almost a decade. I shudder to think what the atrocities might be.

Oh, Simon.... now naive and idealistic you are!!! The Liberals always campaign on the left but they rule on the right .... because they are a capitalistic party with deep corporation roots like Power Corp of Montreal and eminence gris Desmarais who influenced PET, Mulroney, Chretien, Martin .... and now Justin who is just a marionette with Gerald Butts pulling the strings and writing the script. I hope you don't think that teacher-actor-snowboarder Justin can come up with all that political stuff?!

Justin has little to no 'power' as Liberal leader and he will do as he's told because on his own he's an empty suit.... a joke. Why can't you see that too? Oh, well, Justin is doing a great acting job and the youth and in particular the fecund female fans are going gaga over him. I think he's got a good shot at being our next PM of Canada.

Steve belongs to the Christian and Missionary Alliance Church which believes the bible is inerrant and the second coming is imminent. You can't believe the bible is inerrant and say you support women. Just have a good read and see what the bible has to say about the role of women in the world, life, etc. No Steve doesn't believe in female equality. After watching steve for 9 years the only conclusion I can come to is Steve believes in his and his Cons superiority and every one else is way behind.