Stephen Harper and the Humiliation of Jason Kenney 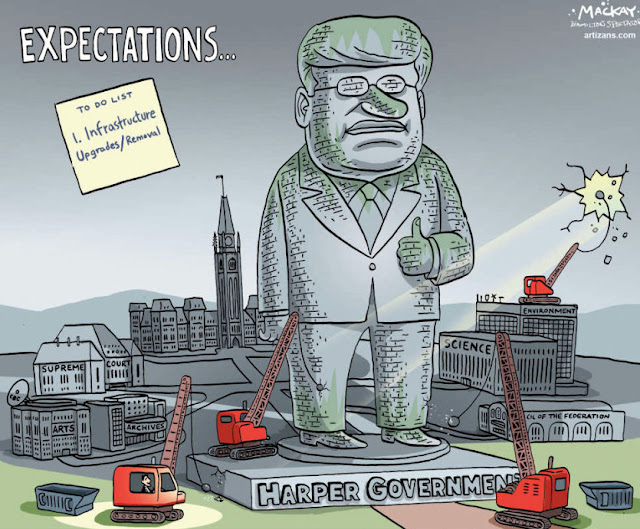 I can only imagine how Stephen Harper must be feeling, as he looks down on the smouldering ruins of his beloved Harperland.

Once he towered over it, and crushed all who opposed him.

One moment he was in total control.

And the next moment he wasn't... 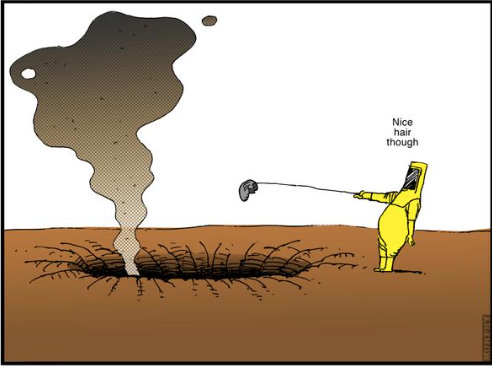 Dan Murphy
And what must make it even worse, make it feel even more like the fall of Rome, is the knowledge that in the end even his faithful stooge Jason Kenney did betray him. 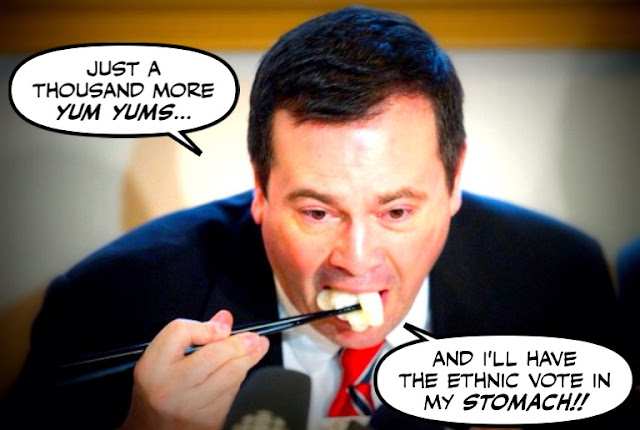 For as you know the chubby theocon has spent years rushing from one ethnic banquet to another, at our expense. Earning himself the title of Mr Curry in a Hurry.

And proclaiming himself the Lord and Master of the Immigrant Vote.

But sadly for him, and the Cons, it seems when the time came to deliver he failed miserably.

The swath of red ridings that propelled Justin Trudeau to a thunderous Liberal victory Monday boasts more newcomers as a percentage of the population than any other party’s territory. That’s a stark contrast to 2011, when many of Canada’s fastest-growing, diverse metropoles, especially in the urban and suburban areas around Toronto and Vancouver, voted Conservative.

It seems that those new Canadians didn't like the way Kenney took them for granted, while he played the dirty game of identity politics, which needless to say made them nervous.

And they really hated the way the ghastly theocon tried to make them believe that Justin Trudeau would flood their neighbourhoods with junkies and hookers... 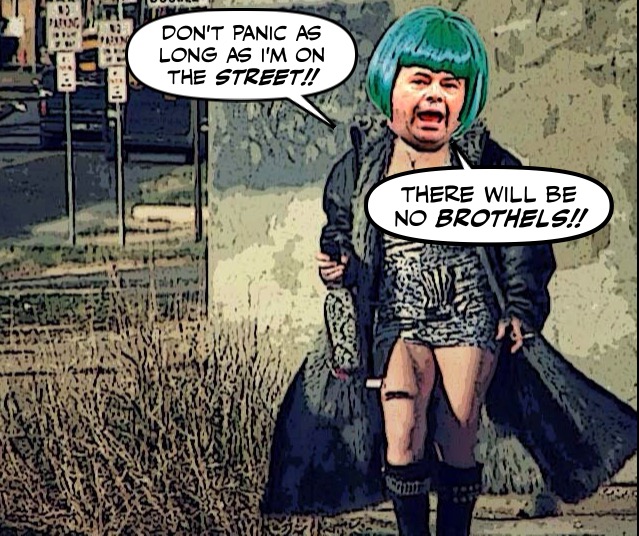 Which insulted both their intelligence and their sense of decency.

And has no doubt left Kenney contemplating his bleak future.

Or praying for a miracle... 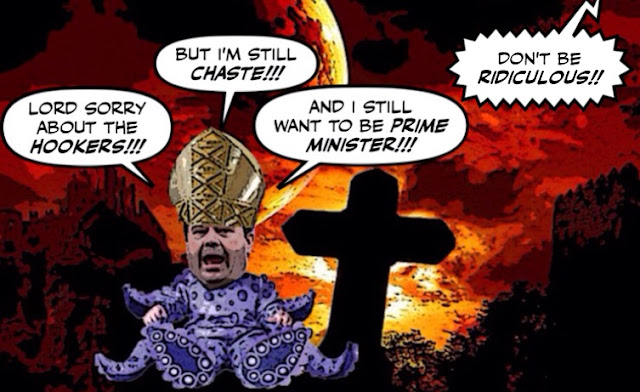 While all around him the once mighty Con regime implodes.

All-powerful only three days ago, the Conservative Party of Canada is suddenly a roiling mass of dismay, anger and confusion that spreads deep into its truncated 99-member caucus.

And Cons like Ron Liepert tell of terrifying encounters with the monstrous Jenni Byrne...

Several months ago, Liepert says, he had “a 15-minute shouting match” with the controversial Jenni Byrne, who was then Harper’s campaign manager but recently lost that post in the face of impending disaster.

“It was the most classless conversation I’ve ever had in my life.”

Before the bestial Bryne was herself  thrown under the wheels of the Con bus.

For seeking the support of the Ford brothers and making Doug the thug, or the slug, think that he too could become the leader of the Cons... 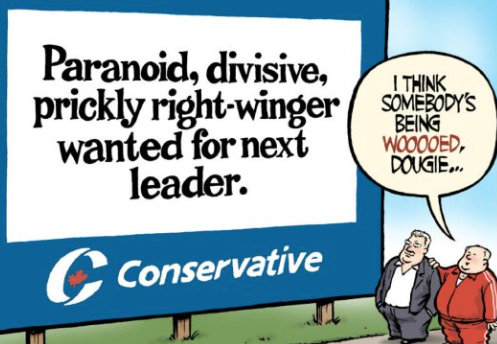 And of course for progressives this sordid spectacle couldn't be more entertaining.

The Cons lost the election, Stephen Harper has been humiliated, Jason Kenney has been made to look like a loser, and the Cons are now fighting themselves.

And don't forget that in just three weeks the Mike Duffy trial resumes, which can only do Stephen Harper and his battered Cons even more damage... 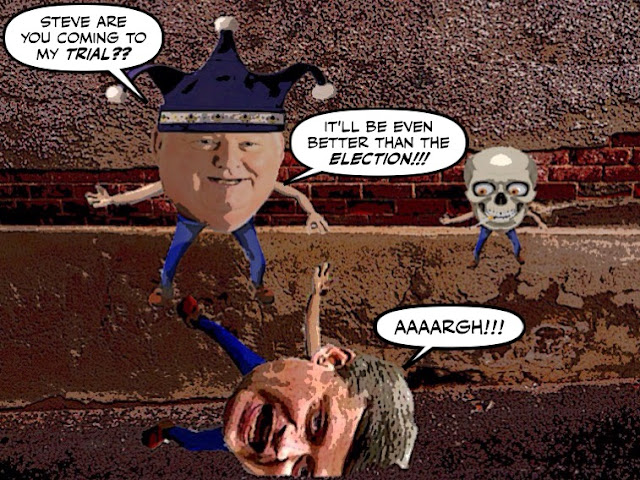 And yes, isn't it wonderful?

He was a monster. It was a nightmare.

I predict Canadians will be paying closer attention from now on..........

“It was the most classless conversation I’ve ever had in my life.” does not say much of Lieheart [SIC on purpoise] either does it?

The Cons went to the dark side when they were assimilated by the Reformers. I don't see how they can find their way back with so many of the former ministers that supported those policies still in the party. Perhaps some were acting as stooges but if they were it does not speak well for their morals or leadership skills. For now it has to be assumed the Reforma-Cons will try to put on a kinder more constructive face and wait for the next crisis to pounce in 2 to 3 years time. The best defense we have is to ensure the Liberals follow through with their promises of electoral reform as well as strengthen the independence of our institutions so that small but determined groups cannot easily capture our democratic system by undermining or replacing civil servants in key positions. In the short term investigative news should become real interesting when the key stooges are replaced and information starts flowing again. There are the Duffy, Carson trials, failure to fund our domestic security while promoting war in Iraq, as well as the inquiry on murdered Aboriginal women especially now that it seems that certain police forces were part of the problem rather than the solution as portrayed in Harperland.
RT

Simon, I've heard that the Duffy trial may be all but over as far as the prosecution is concerned. It sounds as though they don't want to call any of their obvious "star" witnesses - LeBreton, Tkachuk, Stewart-Olsen, Arthur Hamilton et al because they have an idea of what Duffy's counsel, Don Bayne, has in mind for them and the janitorial bill would be horrendous. Cross-examination of those miscreants could also lay the foundation for an application for a subpoena to the no-longer prime minister of Canada, freshly minted backbencher, Shifty Steve Harper.

Would that Duffy were a wealthy man, all that and more might follow. He's not and, at this point, I'm not sure that Bayne hasn't wandered into pro bono territory.

Nothing would please me more than to see this trial not simply fizzle out but, then again, Christmas is still two months distant.

That Global News analysis is really interesting. Not only did the Cons fail to win the "ethnic vote", it turned out that blatantly supporting the wealthy and crapping on the middle and impoverished classes was not so popular!

And the Cons are still circling the weak campaign wagons around their losses, saying they can't understand why they lost, because their policies were go great and Trudeau's are so bad, claiming it was nothing but a capricious and vain desire for change on the part of Canadians; the Cons didn't lose because they're horrible, but because people just wanted a change.

I hope the weeks and months, and years even, to come are filled with revelations about Con corruption, law-breaking, deceptions, abuses of power, and so on, all to keep reminding the nation about how monstrously anti-human they really are.

Canadians should still pursue just some of the crimes that he's committed while holding office. I would like to see Stephen Harper in jail along with some of his other buddies.

Nothing would please me more than to see Stevie forced to testify now that he will no longer be PM when the Duffy trial resumes.

Enter the sunnier more inclusive Kenny, but the press doesn't seem to be buying it! We need to keep following these Con clowns until they really and truly are GONE!

"The outgoing defence minister and presumed Tory leadership contender raised eyebrows this week when he told The Canadian Press his party needs to project a "sunnier and more optimistic" brand of conservatism.

That was all a bit too rich for Postmedia columnist Michael Den Tandt, who pointed out Kenney "belittled and mocked" prime minister-designate Justin Trudeau for years and was a key figure in the divisive debate over the niqab"
Rt

Keep in mind the Cons still have 99 seats. How long will Harper hang around for before he resigns as a lowly MP?