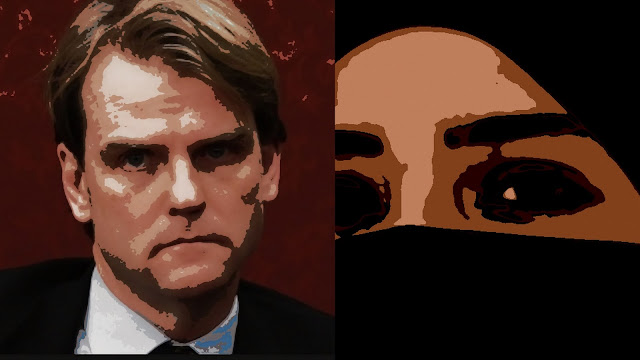 You might think that buried deep inside his lizard brain there might be a sputtering spark of decency.

But no, just a few days ago he was going after Syrian refugees.

Now he's going after a woman who wears a niqab.

The federal government says it plans to challenge a Federal Court of Appeal decision that quashed its attempts to ban face coverings at citizenship ceremonies. Immigration Minister Chris Alexander has issued a terse, one-line statement saying the government will seek leave to appeal the case to the Supreme Court of Canada.

It couldn't be more cowardly or disgusting.

And so soon after this loathsome act.

Could he sink any lower? What sewer will he not swim in? 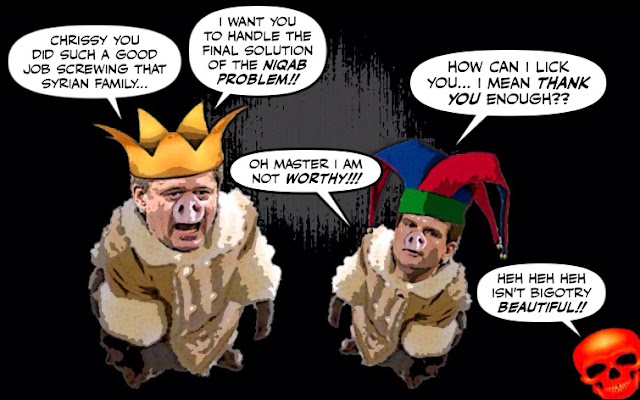 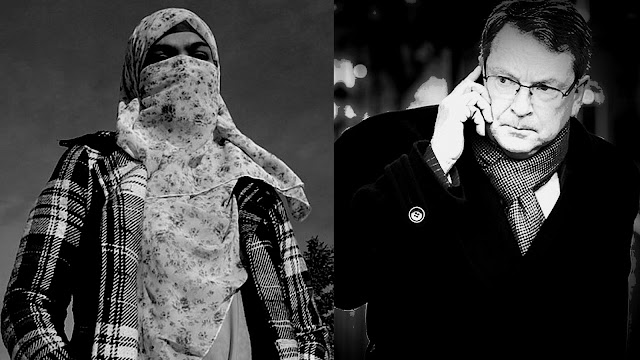 That bottom feeding racist has just spotted another wedge issue.

So he's going for it like a trout goes for a fly, or a hyena goes for a pound of flesh.

You know, I don't particularly like niqabs either. I have no time for any kind of religion. But that's just my opinion, and it's really none of my business. I don't judge others by what they wear, I judge them by the kind of people they are.

Zunera Ishaq has offered to bare her face in private before the citizenship ceremony for purposes of identification. She has every right to wear what she wants to that ceremony.

Two Canadian courts said she could, so will the Supreme Court. And the Cons know that.

So this is nothing but naked bigotry.

Just another way for Stephen Harper to pleasure his rabid base... 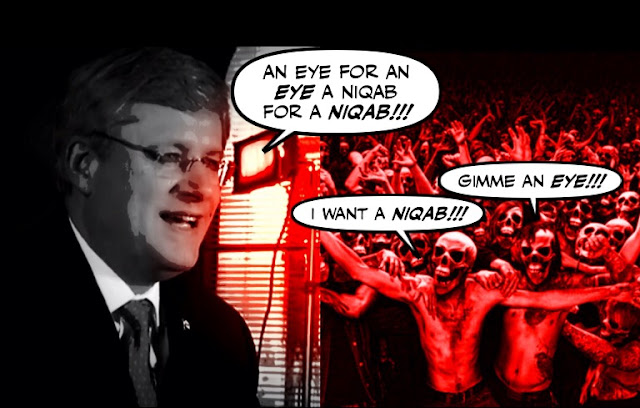 And all I can say is please, please defeat Harper, Alexander, and all those ghastly Cons.

And demand that the Aussie bastard Lynton Crosby stop trying to divide Canadians.

Or better still get the hell out of Canada.

Before him and his bigots tear this country apart, or degrade us any further...

Two days since since Harpers huge surplus ( an elephant delivering a mouse ? ) and the Nanos overnight numbers haven't moved. Pissed of all those vets for nothing.

Who would vote for that piece of shit? A racist idiot.

These Conservative goons will play up any bigoted stereotypes they can find, particularly those related to Muslims. Unfortunately, their racist, scared, white male base laps it up. Ugh.

But didn't Harper speak at a Canadian-Muslim event shortly after the photo of the drowned boy went viral?

Chris Alexander, the biggest asshole Minister Canada has ever had since Vic "Fucking babysitter" Toews.

what a waste of our tax dollars. I personally wouldn't wear one, and don't think they have much place in a secular modern society, but hey, I'll defend her right to wear a niqab.. we still; have polygimsts living in B.C. and that just continues, must have a dozen wives or more. So lets not get all in a twist if a woman wants to cover her face. The rest of us do it on Halloween and think its just fine. Steve and his cons just don't like Muslims.

Illegal Chinese in Vancouver, get Canadian citizen via fraud, not much being done about that, but one Muslim woman wants to wear a face covering because she honestly believes its part of her religion and Steve is taking her to court? you gotta wonder about those Cons. . The Province newspaper in Vancouver reported this morning that over 100 Communist Chinese had obtained Canadian Citizenship via fraud. Did we hear the cons say anything about that? Not so much. Are there even enough immigration officers left in Vancouver to investigate this. what was citizenship doing while all these people obtained illegal citizenship? Now perhaps we could hear from Chris

I wonder if Cons such as Chris Alexander and Paul Calandra actually BELIEVE what they say when spewing their talking points on P & P, etc. If not, how do they sleep at night? Are they comforted by the fact that they will each receive a big fat MP pension even if neither are re-elected?