Tax Evasion: When the Cons Are Part of the Problem 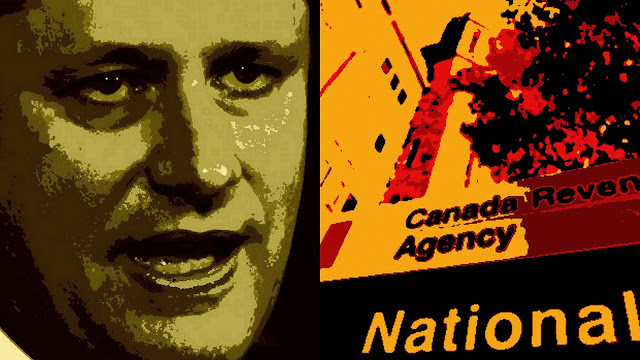 As probably you know, the Con regime has given the Canada Revenue Agency more money to go after its enemies.

While depriving it of the resources and the inspectors to go after tax evaders.

Well now it turns out there may be method to that madness.

For it seems that when it comes to tax evasion, the Cons are part of the problem.

The federal agency that invests civil servants' pensions set up a complex scheme of European shell companies and exploited loopholes that helped it avoid paying foreign taxes — a move that could undermine Canada's standing internationally as its allies try to mount a crackdown on corporate tax avoidance.

But don't ask Tony Clement to explain that one, because he knows NOTHING. 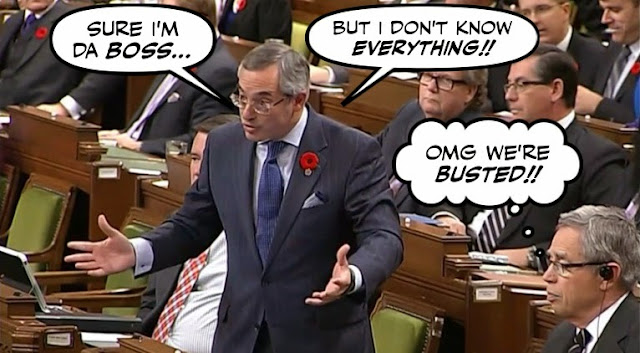 Treasury Board President Tony Clement, who oversees the pension body and appoints its members, replied that it is an "arm’s-length administration from the federal government" with its own board of directors.

"We of course on this side of the House expect that all investments should be done in compliance with laws and rules and regulations in a transparent manner, and to the greater benefit of the clients," Clement said.

Just watch him squirm as he tries to dodge the questions...

And then ask yourself is this a government or a Con mob?

That would use the CRA to go after a gentle group of bird watchers.

But would allow the big tax cheaters to rob us blind.

A former RCMP corporal who probed commercial crime for 16 years for the Mounties said he's concerned his pension money is being shifted to one of the very jurisdictions that used to stonewall some of his money-tracing investigations.

While breaking their promise to crack down on them, in a most scandalous manner.

"The late Jim Flaherty had promised in Budget 2013 to go after large corporations who cheat the Canadian system and Canadian taxpayers with aggressive offshore tax avoidance. Since then, Finance Minister Joe Oliver has consulted with big businesses and shelved the project," Liberal MP and revenue critic Emmanuel Dubourg said in a statement Thursday.

Even as those Con artists try to buy votes with OUR money. 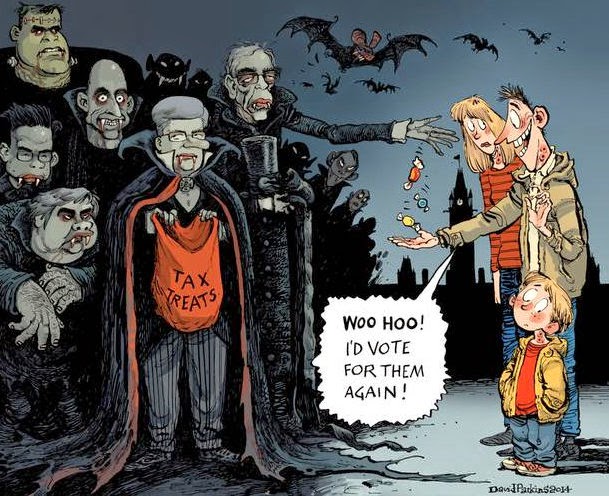 And even as the hapless Joe Oliver prepares to deliver his fall economic update.

Joe Oliver will release a fiscal update next week that will show just how much surplus cash will be left after the government enacts its multibillion-dollar package of family-focused tax cuts.

In a place where the opposition can't ask any embarrassing questions.

The timing of the update means it will be delivered during the one week in November that the House of Commons is not in session.


Or ask why one should have to PAY to hear an economic update? 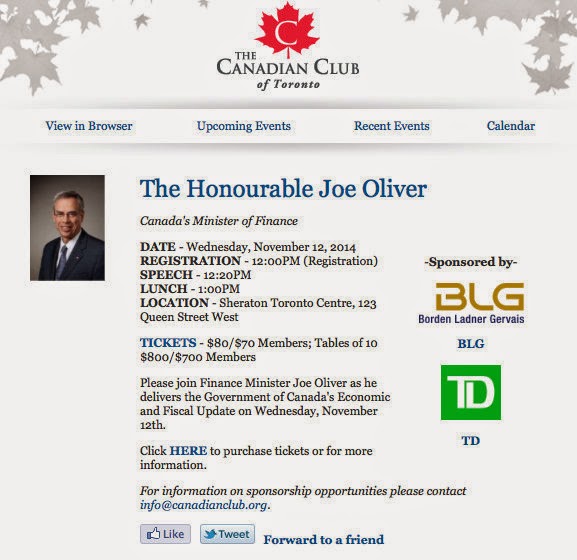 At an event sponsored by a big law firm and a big bank.

Or just ask the question I asked earlier: is this a government of the people, or a Con mob for the wealthy?

And of course the answer to that one is OBVIOUS.

And the only questions that remain to be answered are when can we defeat them?

To the place he belongs... 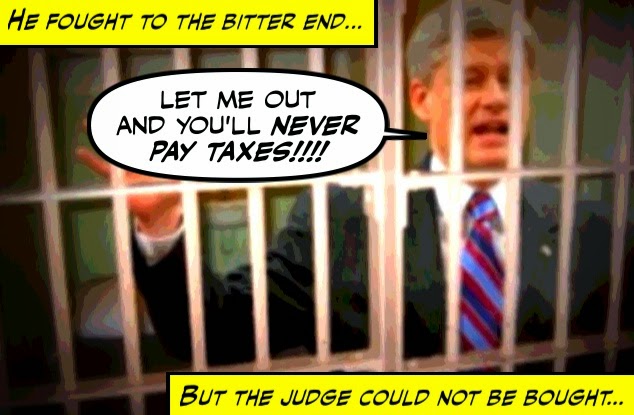 I really don't understand how some people can actually sleep at night!

On a lighter note. Top Ten Jihadi Karoke Songs while Cruising to Turkey. The Fraser Institute may have already weighed in .

Harper has committed not only his greatest stupidity but his greatest single act of harm against Canada. Going forward with the F35.
http://thinkingaboot.blogspot.ca/2011/05/military-industrial-complex-massive.html
This is real money, our future flushed.

Harper works for the resource robber barons and the wealthy barons. It is not beneath Harper's dignity to lie, deceive, steal, be corrupt nor cheat to win. Harper and his cabal have done nothing other than steal. That they have ripped off other countries for tax evasion, is exactly what Harper and his gang of thugs would do.

Does Gazebo Tony not recall the $50 million to buy a riding? Clement trying to deny he knew nothing of the tax evasion? The hell he didn't. Nor will we believe anything Oliver says, he called Canadians eco-terrorists. Oliver was setting up an, RCMP anti-terrorist squad? That the RCMP let Nigel Wright off his crime.

I could go on forever regarding, Harper and his cabals corruption and thefts. Do I believe Harper and his thugs would participate in tax evasion? You bet your bippy, I would believe, Harper and his Cons would evade paying taxes. They are your typical robber barons.

Canada's name in the International scene is, pure unadulterated mud. Once again Harper and his crooks, have embarrassed and shamed Canada and the citizens.

What do you expect from a political party born in sin, Harper and McKay the con party?

They tricked or should I say swindled David Orchard to steal out right steal the Tory name and turn it into an outlaw radical American right-wing wing-nut regeime?

Question: How the fuck did they get away with it?


Answer: by stealing lying and cheating...

hi Kathleen...yes it is hard to imagine how some of those Cons can sleep at night. I'm guessing a total lack of decency and/or booze...;)

hi steve...that's a mighty fine music playlist. Too good for those religious fanatics. But you did make me think of something funny. The only time I booked a cruise, the cruise ship hit a reef about four days before I was supposed to board and I never went anywhere. So remind me never to take a Mediterranean cruise, because with my luck I could end up sharing a boat with a hundred dangerous jihadis. Which needless to say would be the opposite of relaxing... ;)

hi anon...you're right, they are the scuzziest government this country has ever seen. And what drives me absolutely wild is the way they brag about something, only to do the exact opposite. For I'm sure you remember how they promised to be transparent, and isn't that a bad joke? It's the worst government ever and we can't get rid of it soon enough...

hi mogs moglio...you're right it was born in corruption, and emerged on to the political scene like the Monster from the Black Lagoon. For which of course we have the idiot Peter Mackay to blame, who was taken to the cleaners by Harper and for that alone can never be forgiven...

MacKay was promised a political portfolio a Ministerial job he jumped like a dog for a Frisbee Simon he is a classless clown, who bowed to the Harper machinations...

Jail life will be good for him.

“It is interesting how things come around full circle this particular song still seems to be the story of my life in many respects…” --->John Denver from the video leaving on a jet plane.

How could any asshole compare John Denver with a jihad terror org?

John died in ‘leaving’ on his own airplane from his ex-wife Annie who he still loved dearly, listen to it again and it is a sad love story it is not property of jihads…

If you do not like the truth I am telling you perhaps you need to leave on a jet plane.

"Monster from the Black Lagoon" I prefer Loonier Toonier from the big TO who pretends to be a cowboy?

How the fuck is this possible?

Trust me as a westerner who does not hate easterners Harper is a phoney piece of sh** and not well liked in the Mount Royal district of Calgary Alberta Canada where he managed to hijack the area with his right wing radical nut cases....

Mogs and I have hugged that out. I never meant the slightest bit of disrespect to the great John Denver.

Hi Simon I like the fevour of Mr Mogs but suspect he may be too good to be true. It just feels like a con job.

Steve we all know Harper works for the 1% he don't give a shit for the rest of us his commitments lie south of the border...

No Steve if you have lived as long as me pushing 60 you learn allot along the path to surviving I call it how I see it and you or anyone do not have to agree and I am fine with that as long as I get the same right.

The obligations of the audit section after the audit decision has been taken are: Preparation of audit program; Audit notice; Scope of audit notice; etc.

really amazing dialogs in Canadian parliament due to depriving it of the resources and the inspectors to go after tax evaders. so much appreciate to visit this post.