Stephen Harper and the Dirty War on the Unions 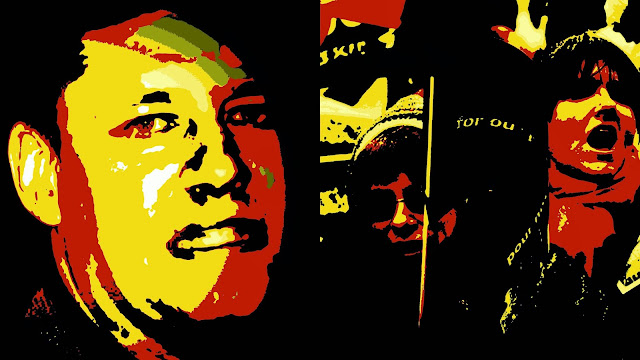 It's a foul anti-union bill worthy of a Banana Republic or a tea bagger place like Alabama.

It would strip unions of their privacy rights, bury them in paperwork, and cripple their ability to defend Canadian workers.

It was introduced by the obscure Con backbencher Russ Hiebert in 2011.

And all but gutted in the Senate last year.

But the monstrous Bill C-377 still lives, because as Tim Harper writes, its real daddy is Stephen Harper himself.

The reason it won’t die is simple — the bill has been orchestrated by Harper’s office and an anti-union lobbyist even if it bears the imprimatur of British Columbia backbencher Russ Hiebert.

Its real author is the sinister anti-union organization Merit Canada.

And its lobbyist Terrance Oakey, has a special relationship with the PMO... 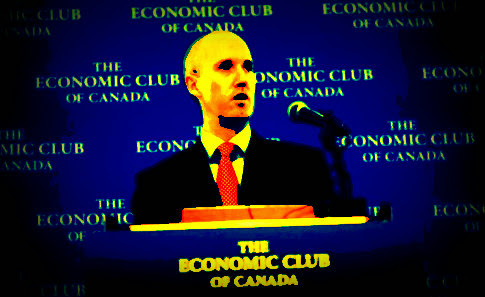 As Merit’s man in Ottawa, Oakey had 117 meetings with public officeholders on the bill since November 2011, but it’s his level of access which sets him apart. He had 13 meetings with Hiebert, but also 12 meetings with Harper’s (since departed) director of stakeholder relations, Alykhan Velshi, as well as a meeting with Rachal Curran, Harper’s director of policy.

Harper’s former chief of staff Nigel Wright attended one of the meetings with Hiebert and Velshi. Oakey also had a separate tête-à-tête with Foreign Affairs Minister John Baird.

Whose right-wing fanatics will apparently meet with him anytime he wants, but claim to have no time to meet with the unions.

“This guy (Oakey) had open access to the PMO, but for the labour movement, the PMO is a closed door,’’ said CLC official Danny Mallett.

Which not only shows how much the Cons have corrupted our political process. But also shows how far Stephen Harper will go to intimidate and destroy his enemies.

For he has no fiercer enemy than the union movement, who along with other patriot groups like the Supreme Court, are standing up for our precious Canadian values... 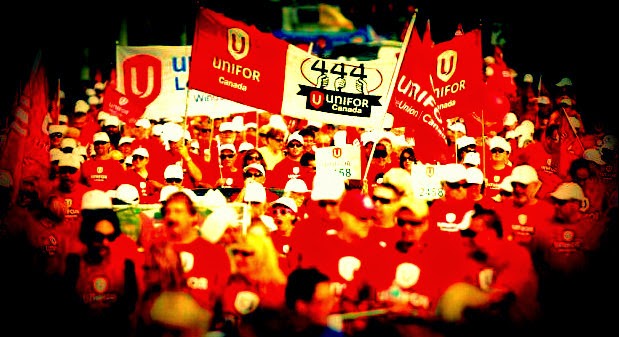 And Harper knows that unless he can cripple or destroy them, he will not be able to transform this country into a low-wage economy, turn Canadians into the slaves of foreign corporations, and our Canada into a JUNGLE.

A place where the rich can gnaw the flesh off the poor, in the darkness of his depravity. Where the young are slowly strangled, and the old are condemned to die in misery.

And the good news? He will not succeed. The union movement is too strong. 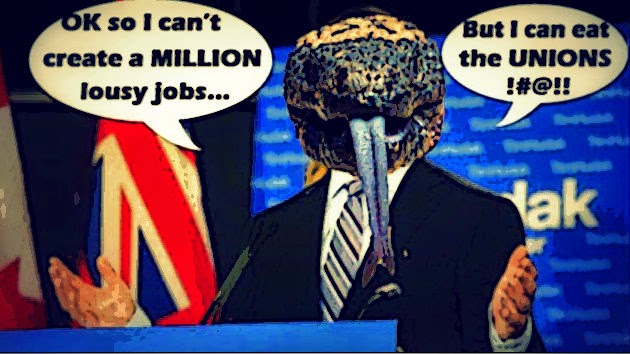 Who thought he could bash the unions, only to be bashed back to the hell or the hole he came from.

And they will help defeat Stephen Harper in the next Canadian election.

Unifor will urge its 300,000-plus members to vote strategically and will pour its resources behind local candidates — be they NDP or Liberal — that are best positioned to defeat Stephen Harper’s Conservatives.

And of course I'll be supporting them all the way, as I have since I was fifteen.

Marching proudly down the road to a better Canada with them.

And singing this glorious song...

The union makes us strong.

The tea bagger Cons will be defeated.

And this fascist wannabe is going down... 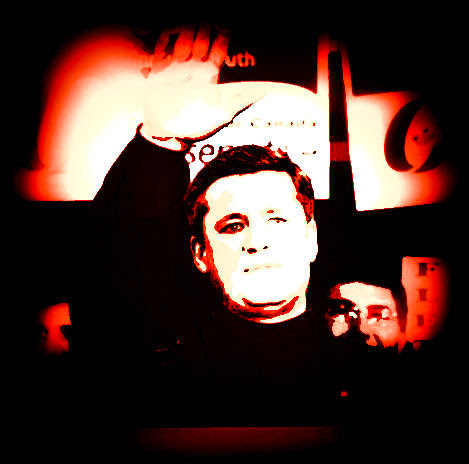 If you think that Tim Hudak's defeat was a good thing...

I don't have a crystal ball, but Ontario's future is starting to resemble Motor City.

Harper is a traitor doing acts of treason by selling Canada to Communist China. No Canadian has to obey an evil traitor. Harper the pretend big shot is flying off to Communist China, in his gaudy Air Force one plane. We do not want that vile country on our Canadian soil, what-so-ever. Communist China fouled their country into a polluted wasteland and no way in hell, do we want that country over here to filth up our country.

This is our own fault, for not throwing that evil monster Harper, right out of Canada. Harper is even dumb enough, to think he is a devout Christian. How funny is that?

Union don't just work for their members, they frequently have scholarships, support food banks, support political candidates, etc. What maybe their most dangerous assets is, they are organized and they set a standard. It was unions which first negotiated health care benefits. Now any number of non unionized employers offer similar packages. Most changes we have seen in the work place where first negotiated by unions. Of course harper wants them gone.

If it weren't for unions we would still all be working 6 days a week, 12 hrs days, at starvation wages. For those of you who don't think that is possible, just have a look at workers in India, China, Pakistan, Bengladish, Vietnam, etc. If a country doesn't have a healthy union base, the workers aren't making a decent salary and health care is the pits.