Harper's War and the War He Won't Fight 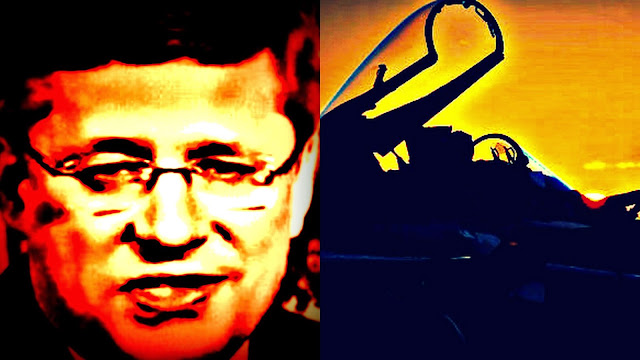 Well now we really are at war. Canadian warplanes have dropped their first bombs on Iraq.

And in his command bunker or closet, Stephen Harper has been tweeting or retweeting up a storm.

And so have his excited followers.

Even though even the "good guys" in the region think it's a waste of time.

A senior member of the opposition to Syrian President Bashar al-Assad’s regime says Canada’s time, effort and money would be better spent training ground forces to retake territory from the Islamic State in both Iraq and Syria, rather than on a bombing campaign.

But nowhere on any Con site today, was their any mention of a far more important war. The war to save the planet.

Because that is a war Harper and his Con climate change deniers will not fight. Even though that report underestimates the severity of the situation. 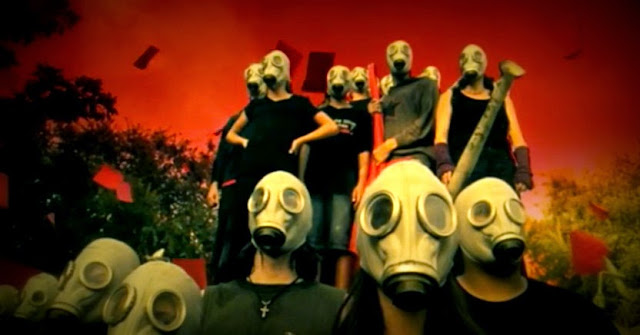 As the Washington Post pointed out this week, past reports have always tried to err on the side of understatement; it’s a particular problem with sea level rise, since the current IPCC document does not even include the finding in May that the great Antarctic ice sheets have begun to melt. (The studies were published after the IPCC’s cutoff date.)

And even though there are ways the fight can be won:

The price of a solar panel has dropped by more than 90% over the last 25 years, and continues to plummet. In the few places they have actually been deployed at scale, the results are astonishing: there were days this summer when Germany generated 75% of its power from the wind and the sun.

In the war for human survival we're The Enemy,

A new report this week shows that by delaying the Keystone pipeline in North America protesters have prevented at least $17bn (£10.6bn) in new investments in the tar sands of Canada – investments that would have produced carbon equivalent to 735 coal-fired power plants.

The people who must be stopped from torching the planet.

But then as Dan Leger points out Harper has bet the farm on Alberta's tarry oil, and even though oil prices are plummeting. 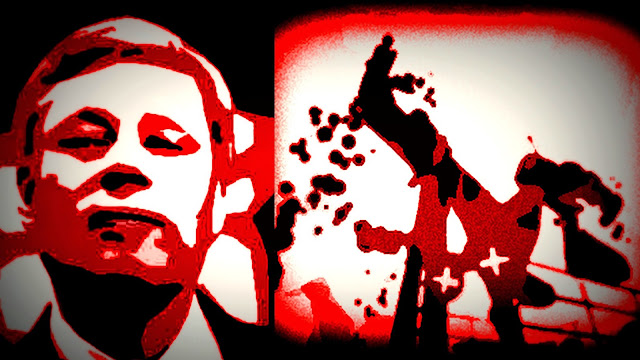 On the economy, Harper’s campaigners must wilt a little bit every time they hear how oil prices are capsizing. Their whole re-election plan depends on jobs, a balanced budget and handing out cash to potential voters via targeted tax breaks.

Still thinks he can get away with it:

The saving grace for the Harper government is that the full impact of lower oil prices might not be felt until after the next election, expected in less than a year. So it can table a balanced budget next spring, dole out $7.1 billion in voter-friendly tax cuts and pretend that is all well.

And he'd rather pose as a Great Warrior Leader, from the safety of his closet bunker... 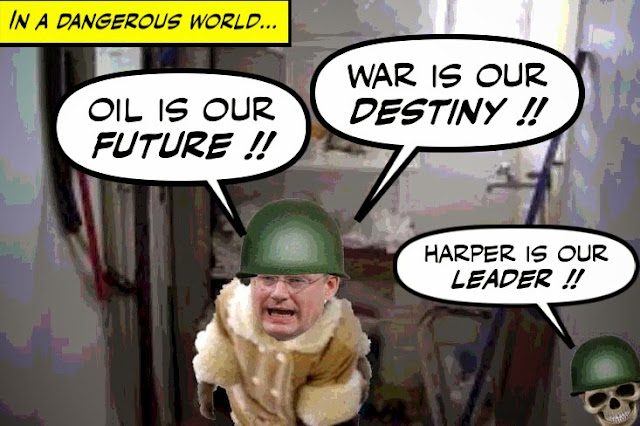 Add in Harper’s bellicose statements on the ISIS war in Iraq and his decision to send fighter jets to join the fray and you have what a friend with long, sad experience in conflict zones called: “Harper’s greatest wish, to be a prime minister in wartime.”

Is that what Harper seeks, to be a latter-day Canadian Churchill, waving a pudgy fist at the forces of darkness? Or will he look like “George W. Bush light,” as the New York Times described him last week?

And all I can say is that what Canadians really want? To be known as warmongers and planet burners?

And if not, when will the progressive parties finally declare war on the Con regime and their depraved leader?

Before they shame us further.

Before he destroys our future... 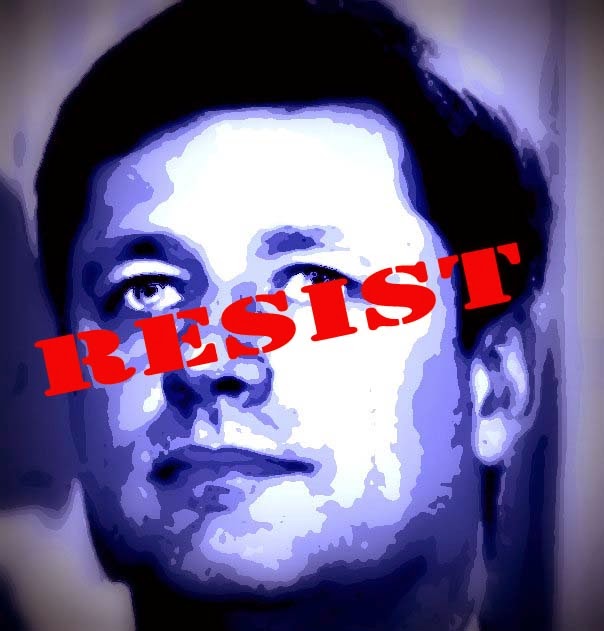 Jeeeez.A little while back we were standing with allies against Libya and Afghanistan.Anyone who knows anything,or hangin' in a cave or a closet knows that didn't work out to well for the people living there.Unless your a drug lord.
Now they are going after ISIS,ISIL,IS Whoever.The same bunch making $2 million a day selling oil.According to Pepe Escobar.

Maybe the Canadian jets can first bomb the place the IS is getting their oil.Or better yet the places that are buying it.
Oh silly me.They are not allowed to do that.

When will we Canadians finally figure out that the Harperites don't really care about us? All they care about are bibles, guns and oil.

Interesting. The 'Kids in Short Pants™' try to pollute comment sections with the old 'use as many carriage returns as you can to obscure other comments' tactic. It's old, Kids, so you'd better think up something new.

Not too often the N.Y.T. goes after a fellow radical rightie but, then again, when you have a "stupid fucking canuck" trying to be a 'merkan, of course they'll attack him. Nobody on earth gets to be a 'merkan except a 'merkan. harpie's just another bohunk joke of a clown to the boys to our south. he's just too fucking stoopid to realize it.
"g.w.b. lite". I been sayin' that for years. It's about time somebody else caught on!

The N.Y. Times said that?! All right now if we can just get a few Canadian papers to write that. of course his oil buddies may actually be seeing the writing on the wall. They may want to bail and not continue investing in alberta and lay off workers, you know for when the economy improves. They may not see harper and his cons as the way to go right now.

We don't know where interest rates are going. If oil continues to decline, will interest go up. If it does, how will Canadians cope with their mortgages, hello B.C. and Toronto. Bankruptcy a la the U.S.A. 2008, might be in order. That will leave harper and his cons no where.

Canada is wasting money on ISIS. the news reported the Canadian jets bombed a dump truck. Sure makes me feel better already. Yes, as one commenter posted, it might be better to bomb the oil fields ISIS uses, but we know that is forbidden. Too much corporate money at stake. And for this Canadians could die?

Old P.M. "you go to war, I'll hide in the closet" harper hasn't even made 11 Nov. a National Holiday. Its a Stat. holiday in B.C., but not in all of Canada, but then I'm sure his corporate buddies will complain about the loss of productivity. You can always tell a real con when productivity is more important than honouring the war dead. I'm sure they would want us to carry on making sure the 1%ers got all the money there is to get.

hi anon 10:10 am...yes this whole war reeks of hidden agendas and hypocrisy. All of the nations in that region have had something to do with the rise of ISIS, including Israel. And as it was in the beginning and is now, it's all about oil....

hi anon...Until the end of my days I will always wonder why it took so long for so many Canadians to understand the true nature of the Cons, and the threat they posed to this country. I'm afraid far too many of them still don't get it. But that's our challenge, and I'm confident we can rise to the occasion...

hi anon...yes, it is something when the Times declares Harper to be Bush lite. You and I and many others in this country have always known that to be so. But when the Times says it it really must sting...

hi e.a.f....I wouldn't hold my breath waiting for our useless MSM to pronounce on Great Leader. Their behaviour over the last eight years, with some honourable exceptions, has been absolutely disgraceful. By treating the Harperites like any old government, instead of a dangerous alien cult, they have helped fool Canadians, and let their country down badly. One day they will be judged by history, and the verdict will be a harsh one....