Well it looks as if we won't have Dean Del Mastro to kick around anymore.

For after beating his chest for a few days, like a wounded gorilla, the Deaner has finally decided to throw in the towel.

Dean Del Mastro, the MP for Ontario's Peterborough riding, has quit less than a week after being found guilty of spending too much on his 2008 campaign and trying to cover it up. Del Mastro spoke to MPs in the House of Commons just after question period today. The resignation takes effect immediately.

But not before delivering yet another weepy speech, claiming he loved Parliament too much to distract it from the nation's business.

Or divide his beloved party by forcing it to vote to suspend him...

Which almost had me reaching for a towel myself eh?

Because goodness knows we need more principled Con MPs like him.

And the nation's business will definitely miss him... 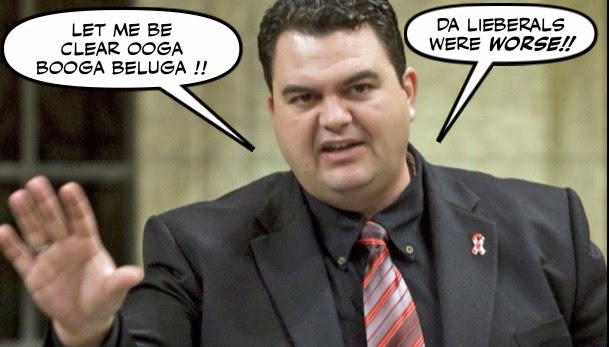 In a horrible sort of way.

Until I realized the REAL reason he was resigning.

In resigning his seat, Del Mastro hangs onto his MP pension, for which he's eligible when he turns 55. Del Mastro, who is 44, was first elected in January 2006. MPs have to serve for at least six years to be eligible to collect a pension. One of the matters that would have been debated at committee, had the Conservative motion gone ahead, was Del Mastro's pension and what would happen to it.

Which made me change my mind about giving him a big hug.

And instead made me wonder whether I should send him Jian Ghomeshi's Big Ears Teddy to console him... 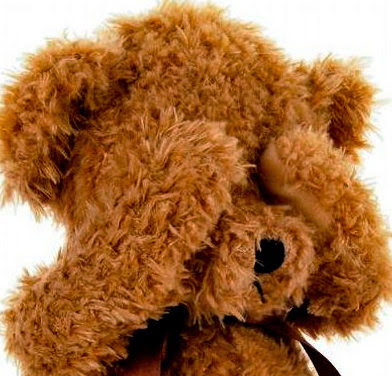 Who can look away when he starts signing cheques.

Or calm him down if he ever feels like punching the judge... 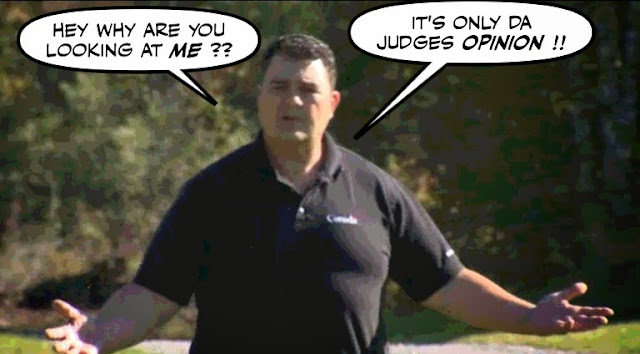 After trying to treat the courts like he used to treat his opponents.

Mr. Del Mastro asked for his day in court, vowed that he would be exonerated, and had a fair trial. A judge found him guilty and he treated his conviction as he used to treat questions raised in the House of Commons: with ridicule.

In bidding farewell to the House, Mr. Del Mastro mentioned a feeling of “humility.” It was a fleeting reference. It seemed out of context with the rest of the speech. And while not wishing to be unkind, it seemed, well “incredible.”

But I do want to assure him that unlike the Cons who were prepared to run him under the wheels of the blue bus, as they have so many others.

Or pretend they never really knew him.

We WILL keep his memory alive.

All the way to the next election... 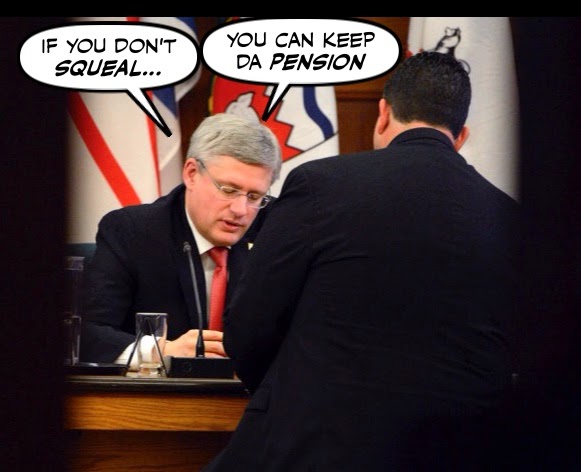 Because we sure don't want to miss an opportunity to make Boss Harper look REALLY bad.

But having said that, I also have to say that sadly, due to the Deaner's performance today, and when I think about it, his less than stellar contribution to the nation's business.

I will NOT be able to run as part of my final tribute to him, the moving song from the movie Evita.

You know, Don't Cry for Me Peterborough.

And have been forced to settle for a much shorter video clip.

Which better reflects how I REALLY feel....

Love the line, "don't cry for me..." We won't be crying out in B.C. Just nice to know another con has left the stage. now will the rest of them go also. Lets see how many have been charged? How many have been convicted? and who all signed their papers or "anointed" them. right, the head con, hide in the closet harper.

Don't you all think it is time for someone to introduce a private members bill making it law that MPs can't draw pensions until they are 67. Perhaps someone who knows how could start a national petition to that effect. I would sign it and so would everyone I know.

Not finished yet. I meant to say 67 for conservatives, 65 for any others.

I despise watching Question Period! It is an insult to my intelligence.......in my opinion!

When supposedly intelligent grown men start crying when they are in public office, then there is something terribly wrong with our whole system/country!

Thank you for another great piece, Simon.

So he cheated by way of fraud, won the 2008 election, and now we're supposed to support this criminal bag of shit when he retires? His pension will have been fraudulently obtained and should be revoked immediately. There has to be a way to strip this douchebag's pension. Any Suggestions???

I watch QP because sometimes there are topics raised by the opposition parties that are rarely mentioned on the news shows. You sometimes get a heads up on a topic a day or two before it is reported in the MSM.

One MP resigns, two call out abusers, and a Minister slanders refugees
BY KARL NERENBERG | NOVEMBER 6, 2014

Another issue of contention is the fact that Del Mastro will receive his parliamentary pension in nine years. Elected in 2006 - Del Mastro has served his obligatory six years to be eligible for his pension.

Cullen said that Conservatives have a bill in Parliament to strip away a person’s pension if they are found guilty of these crimes and that the government was righteous when it came to Mike Duffy, largely because they were under a lot of public pressure.

“Just yesterday they amended [that bill] – it might be called the Del Mastro clause because it exempts that from happening, ” Cullen said, adding that the Conservatives amended their “tough on crime” bill in order to protect their own.

hi e.a.f...as I said in my post we definitely will use the Deaner to remind Canadians of the people Stephen Harper likes to have around him. As well as all the others, who he appointed to the Senate and the courts, for crass political purposes. Quite apart from its sinister agenda, and its incompetence, the Con regime is also the grebes government this country has ever seen...

hi anon...it seems only fair after the way they have denied poor seniors a chance to get their old age assistance cheques until they are 67. But the only problem is that would encourage most of them to try to hang in until they too are 67 and our parliament would start to look like an old age home. Better we fire them all so none of them can collect...

hi Kathleen...I watch question Period whenever I can even though as I said in my post it has become a shabby circus. Although most of my friends think I'm crazy, I want to remember as many of their crimes against Canada as possible, so I can bear witness at their trials...

Hi David...I'm reluctant to strip away anybody's pension, because it plays into the hands of the Cons who would steal all our pensions if they could. But for those who break the law, and violate the rules of our democracy, it would fit the crime...

hi anon...I don't know of any way that can be done. But what most offended me about Del Mastro's speech was the way he tried to sound noble, when the reason he quit so suddenly, was so he could keep his pension. To call him merely grubby really doesn't do him justice...

So many Conservatives have been caught breaking the law now and many more are still awaiting trial. But I think it's all part of a pattern of behaviour for them. They don't care if a few of them get caught eventually, as long as their corrupt government stays in power, it's worth the risk of getting caught to achieve the greater objective of winning at all costs.