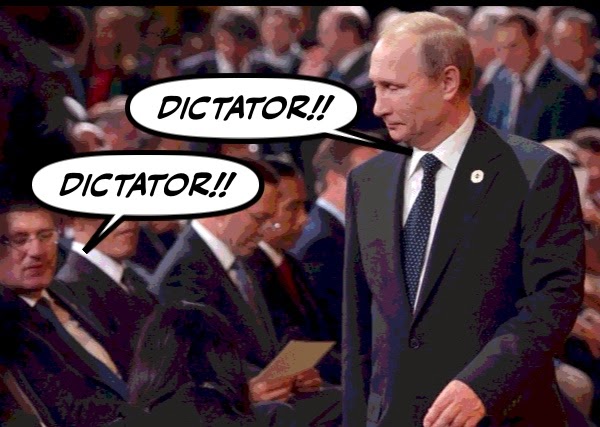 OMG. I see Stephen Harper has stolen the spotlight at the G20 summit, by going dictator to dictator, with Vladimir Putin.

Stephen Harper told Russian President Vladimir Putin flatly that he needs "to get out of Ukraine," when the two met at a Group of 20 summit of major economies in Brisbane.

Or mano a mano.

The Russian Leader stuck out his hand. Mr. Harper accepted the gesture but said to the Russian Leader: "I guess I'll shake your hand but I have only one thing to say to you, you need to get out of Ukraine."‎

In a crass attempt to make the summit all about him, and the ethnic vote.

Although, since we have to rely on what the Kremlin and the PMO had to say about the alleged incident, who knows what REALLY happened... 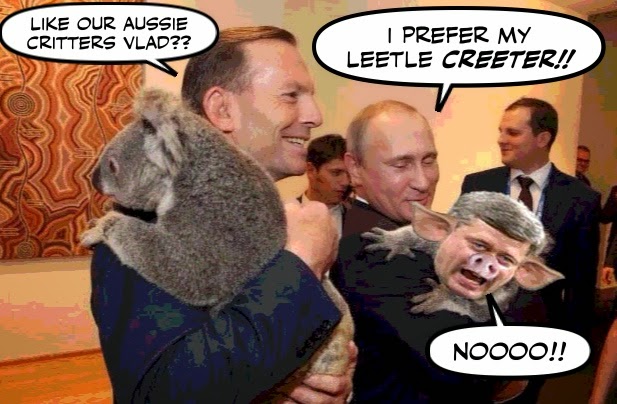 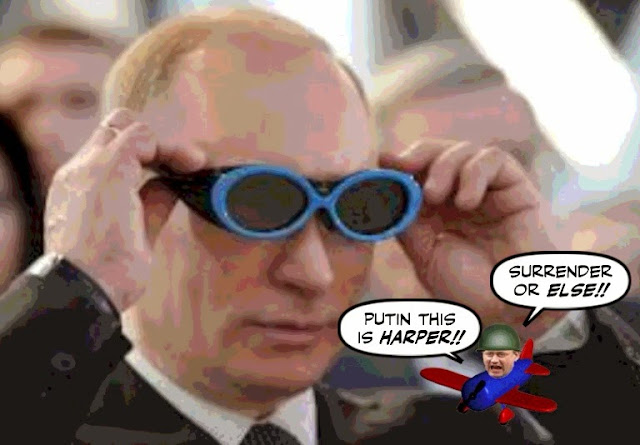 But since Putin is as crazy and as desperate as Harper, and since he has nuclear weapons is even more dangerous.

I think it would be prudent to warn the belugas in the St Lawrence to keep a lookout for Russian submarines.

And warn the polar bears about the new bear in OUR Arctic... 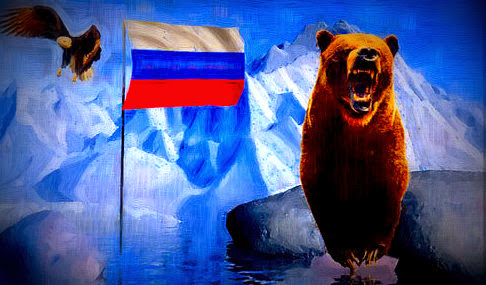 But of course, Harper doesn't care about that. The more he can scare Canadians the better.

So he can pose as a Great Strong Leader... 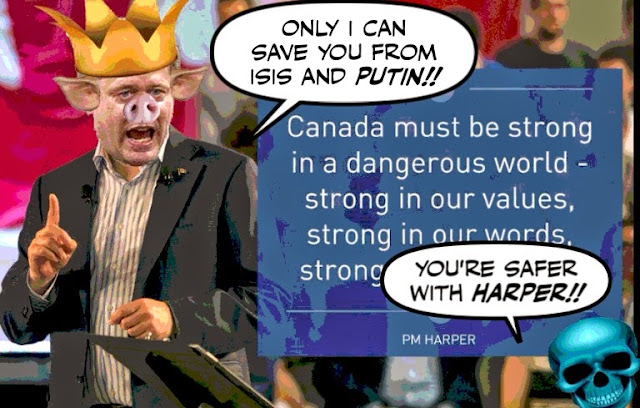 And use his dust-up with Putin to help his good buddy Tony Abbott, keep climate change off the agenda,

And in that regard he failed miserably

The G20 communique will include a significant passage on climate change, EU officials said on Sunday, as the United States and other heavyweight nations override host Australia's attempts to keep the issue off the formal agenda.

"The most difficult discussion was on climate change," an EU official told reporters on condition of anonymity. "This was really trench warfare, this was really step by step by step. In the end we have references to most of the things we wanted."

He was left on the sidelines with his fellow climate change denier Abbott. Looking like a loser, and as I pointed out yesterday, never more isolated. 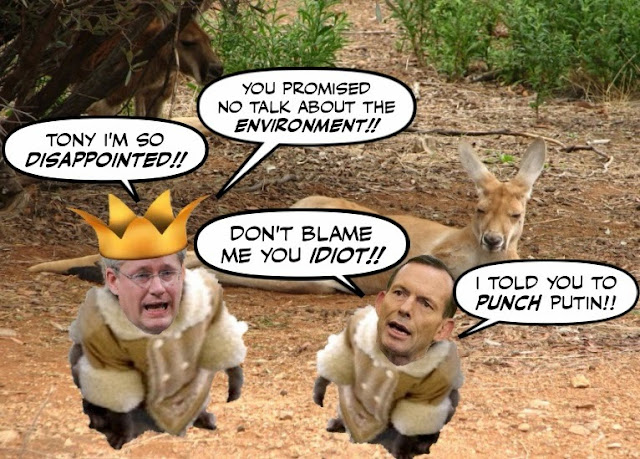 But of course, all of this is no joke. For it proves once again that Harper will do ANYTHING to win the next election.

Even if that means inflaming a dangerous crisis for crass political purposes.

Neither we nor the planet will be safe.

Until that Con clown is removed from office...

what harper alleges he told Putin and what he actually said most likely are two different things. People like Harper are bullies and when they meet someone who is better at that they just back off. When it comes right down to it, Putin could wipe the floor with Harper, either in a fight or war. Harper is an idiot. Putin, maybe crazy, but he is not an idiot. He won't get out of the Ukraine and if Harper actually said that to Putin, harper will again be the G-20 clown. When one looks at international news, in other countries do they ever write about Harper? Ya not so much. He is a non entity on the world stage. Really no one listens to him. He is only a legend in his own mind. Harper doesn't appear to have allies at these meetings. don't see other world leaders seeking him out for discussions, etc. at these type of functions he will be the odd person out given his limited back ground, lack of culture, etc. harper is just another back water boy from no where who truly lacks the necessary sophistication to make it on the world stage.

.. are you basing this on Harper's PMO spokeswank Jason MacDonald's breathless scoop?
.. Like.. uh Jason leaned in bravely & overheard this 'conversation' ?

I recall seeing 1 single picture of a smiling Harper gripping Putin's hand.. location not attributed.
Did Harper's personal photographers fail to capture the momentous 'dustup' ?
Or is the reality that a private session was held for G20 leaders
and some hysterical news was generated by Harper & his PMO via lazy media on a dull day

Putin having to deal with Harper is like dealing with a juvenile who acts tough, but is in fact a coward. I don't believe Harper told Putin to get out of Ukraine. He desperately wants to be one of the big boys, but the leaders at the G20 know he's a hick. They must all know about his hiding in a closet during the shooting crisis in Ottawa. While Pearson was the go to guy at the UN, Harper is the guy to avoid at the G20.

e.a.f. So well put. I don't believe this happened at all. Harper is a coward and from what we have seen of him so far, he's a coward who likes to scream at his underlings and hide in closets. lol?He's a bully and bullies don't stand up to guys like Putin. Ludicrous to even think that he would have done so. This is a PMO tale!

I heard that Putin had a great comeback for Great Closet Leader when he told Putin to get out of Ukraine. Putin apparently shot back: " Can't do that. I am not even there". So why did our G&M not reported that, eh?

Harper said no such thing to Putin. Google it. It was originally attributed to Obama talking to Putin. This is a made-up story from the PMO to counter Harper's humiliating story of hiding in the broom closet during the recent shooting in Ottawa by the mentally ill Canadian.


Kremlin press secretary Dmitry Peskov denied Harper had used the "get out of Ukraine" phrase in offering his hand to Putin.

"These headline-hitting reports have nothing to do with reality," the spokesman said.

Ummmm, regarding this sentence in above article: “To a remark reporters can't take such information out of thin air, he said: "Why not? They can, as practice shows. And they do."

SEE THE PROBLEM IS THE "GET OUT OF UKRAINE" phrase WAS NOT EVEN REPORTED BY A REPORTER !!!!

It was offered to us as as CON lie-truth by Harper's press secretary Jason MacDonald. So, yah, as far as I'm concerned, this is their sad attempt to redeem Harper after he locked himself in the broom closet during the #ottawashooting. And NO, there were no security with him in the room that put him in the cubby hole.... Harper ran in there on his own, leaving that MP in a wheelchair by the front doors.

Later, a press spokesman for the Russian Federation told a slightly different version of their encounter, but confirmed the gist of it to Canadian reporters, saying the Russian delegation was “really surprised” to hear the conversation reported as a rebuff, saying they “greeted” each other.

“From our side, Mr. Harper and Mr. Putin shook hands and Mr. Harper said: ‘You should go away from Ukraine.’ And Mr. Putin said: ‘It’s impossible, since we are not there,’” said the delegate who agreed to speak on condition he was not named by Canadian reporters.

He said he had no further information about any of the other discussions in the room; “The retreat was closed,” he said, adding he was offering comment because “since you gave it just one side, we’re giving you another.”

So the Harper / Putin handshake story is PMO-generated BS. Paint me shocked. #cdnpoli

I now 100% believe this was a totally make up story to counter Harper's closet hiding scandal, there is no proof Harper would even say BOO to Putin, Harper as a coward wud be scared sh!tless of Putin.

Was it a totally made up story?

From the Moscow Times:

Later, as the leaders met privately ahead of the summit, Canadian Prime Minister Stephen Harper responded to an attempted handshake from Putin with, "I guess I will shake your hand, but I have only one thing to say to you: You need to get out of Ukraine," Harper's spokesperson Jason MacDonald told reporters.

Kremlin spokesman Dmitry Peskov told Interfax that Putin responded to Harper by saying that "unfortunately this cannot be done, as we are not there."

The Harper-Putin exchange was also reported in The St. Petersburg Times:

hi e.a.f...although I had a little fun with this story it really is quite serious. Putin is under a lot of strain, and one really has to wonder whether he's losing his marbles. So while he should be opposed for his dictatorial ways, it's not a good idea to provoke him at this time with cheap gestures like that one. Russia is in a situation much like the one Germany found itself in after the First World War. And a mix of humiliation and extreme nationalism could prove extremely dangerous...

hi salamander....well as I said in my post with sources like the Kremlin and the PMO the truth is probably "flexible." And as you know I also didn't believe that Harpo dressed down the Chinese leaders like he claimed he did. But it doesn't really matter. What is clear is that Harper is trying to score cheap political points at a time when the Ukraine crisis is becoming ever more dangerous. And for that reason alone he should be fired...

hi Pamela...I'm sure Putin regards Harper as something akin to a horse fly. But since Putin is under a lot of pressure, and trying to throw his weight around, quiet diplomacy is the way to deal with him, not posturing in public. The Ukraine crisis could very easily spin out of control, and the last thing we need is a nuclear superpower confrontation...

hi anon...yes I saw that in other stories, but then I don't believe that either. Everybody involved in that crisis is lying, and it's almost impossible to know what is going on. But as I said above, we certainly don't need people like Harper to go around inflaming the situation. Everybody needs to take a valium and start negotiating a peaceful solution to the crisis....