How Stephen Harper Screwed the NDP AND Himself 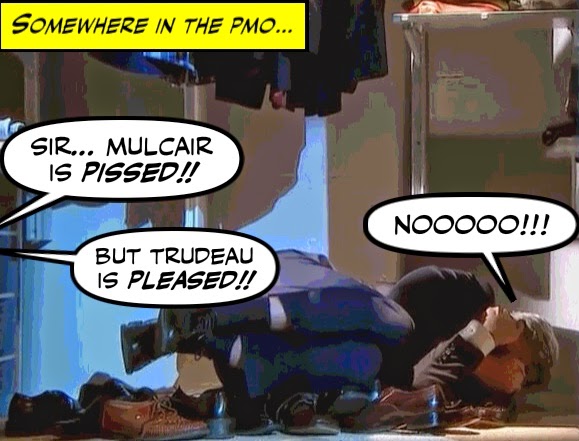 He likes to think of himself as a Great Warrior Leader. And the greatest political genius  this country has ever known.

And of course his faithful fanatics in the PMO groom him like a queen bee, and feed his delusions.

But these days I wouldn't be surprised if they are all sitting there in shock, watching Stephen Harper weeping like a baby, or biting the carpet in his closet.

After finally realizing he has made a horrible, possibly fatal, and definitely elementary mistake.

For although, as I pointed out the other day, his Great Warrior Leader act, and his Fear Factor, have helped narrow the gap between him and Justin Trudeau's Liberals... 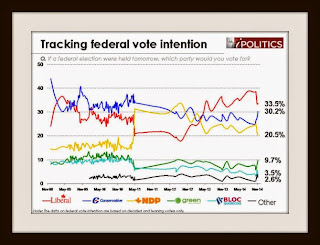 The fading NDP vote means that he may not be able to count on vote splitting to help him win in many ridings. Which would just about KILL his chances of winning the next election.

And in the lizard part of his brain, in the tiny sweaty gland where his "political genius" is believed to reside, it surely must be dawning on him that he has only himself to blame.

He has hurt the NDP and shot himself in the foot, by inadvertently giving Justin Trudeau a leg-up.

The main authors of the NDP’s misfortune are not within their ranks. At least part of the credit for that belongs to the apprentice sorcerers who toil in the Conservative war room and who may, in this instance, have outsmarted themselves.

By systematically treating Trudeau as the leader to beat next year, they have helped to enshrine his status as the top Conservative slayer in the mind of an electorate that has rarely been more motivated to look for such a champion.

Gawd. Can you believe those Con clowns? And their depraved DUMBO.

They set out to destroy Justin, but instead made him BIGGER... 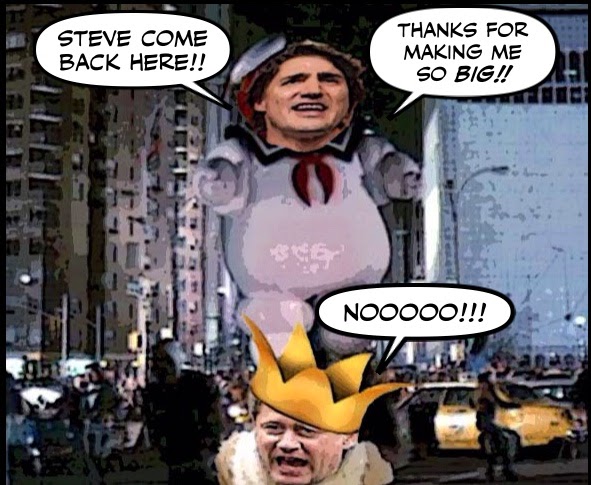 So much for Great Genius Leader. Feel free to call him by his new title eh?

But of course, all of this is very depressing for the NDP.

By now Mulcair’s brain trust is near the end of its collective wits. Neither a leader who routinely performs at the top of his game, nor a caucus with enough talent to form a competent cabinet, nor a voter-friendly policy handbook seems to do the trick for the NDP.

For they do deserve better.

But the good news is the Harper PMO is even MORE desperate... 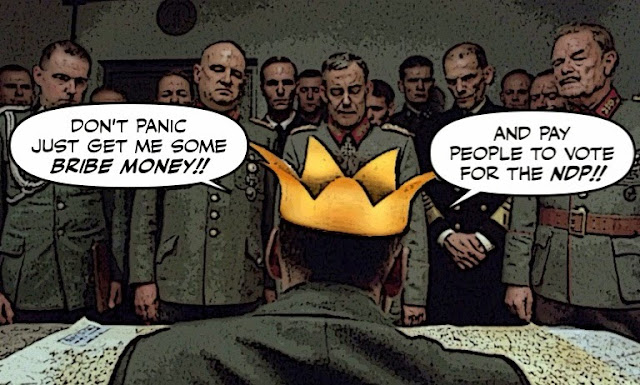 And their Great Leader is said to be on the verge of INSANITY.

And the best news is that while it's all bad for the Harperite cult, the Liberals can still dream of winning the next election, and so can the NDP.

For while David Akin points out one obvious truth here:

The problem for the Tories? Harper-haters have increasingly come to see Trudeau as their best option. Harper stays in office if more - though not too many more - think Mulcair is the best anti-Harper.

He forgets the other:

The so called Harper-haters, by definition, will vote for the candidate they think has the best chance to defeat that ghastly leader.

So if Justin Trudeau should flag, their support will flow to Mulcair. And we who hate Harper because we love this country, can't lose.

Which no doubt has Great Dumbo Leader either rolling on the ground biting the carpet.

Or reaching for his Miracle Closet Panic Organizer...

You know, there's a famous episode in Stephen Harper's life when thinking he was a genius he went on the show Reach for the Top, and was humiliated by a big fat whiz kid named Dino Zicone.

And I'm feeling this ghastly show is going to end the same way eh?

And the verdict of history will be harsh.

He wasn't as smart as he thought he was.

And he was no political genius... 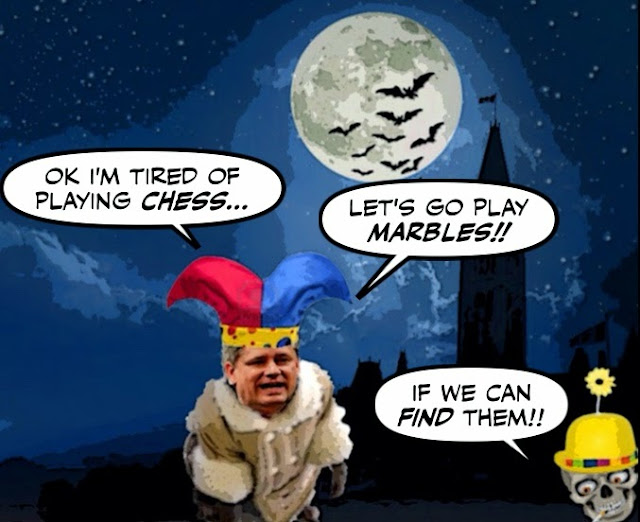 Not bad analysis. Except for this:

"So if Justin Trudeau should flag, their support will flow to Mulcair. And we who hate Harper because we love this country, can't lose."

If Trudeau flags, Mulcair goes back from 18% to 25%, that helps Harper only. And we progressives lose. The NDP will never win against Harper, they'll either deny the Liberals a victory or even worse push them to third place and hand the Tories a majority like they did in 2011 with a better leader.

No it's best if the NDP collapse back to where they've traditionally been in the mid-teens. They can't actually beat Conservatives, so I'm happy to stick with the Liberals who at least can.

I am a student of history. I admit it, In fact everyone in in the school. History has a way of defeating bullies. I hope Harper is one of those. In fact i do not want to see him merely defeated, I want to see him humiluated like GWB. Harper has done nothing like ruining the worlds economy or waging war in the sand, but still he is a target for the narrow audiunce that had to grovel beneath his apoglopictc gaze for half a dozen years.

hi Matt...I'm not choosing sides, I am one of those Anyone But Harper guys. And I didn't have time to elaborate on that last hopeful thought. So for now all I'll say is this: in normal political times what you say is all true, and still most likely to happen. But people tend to forget that the reason for Quebec's so-called "Orange Wave" wasn't that Quebecers suddenly fell in love with Jack Layton. It was because they thought that with Ignatieff flagging, the NDP was their best chance to stop Harper. And what I'm saying is that faced with a similar situation it could happen again and this time all over Canada. Time will tell if I'm right, but don't be surprised if it does happen. For at this point I think that for many Canadians getting rid of the Harper regime is the only thing that matters, and they won't be too fussy about that happens...

hi Steve....We are living in dangerous times, and anything could happen. But I too cling to the hope that most Canadians want to get rid of that ghastly leader and his bully regime. And will do whatever it takes to get rid of them. Having three progressive parties facing a united Con party makes everything more difficult. But hopefully decency and sanity will prevail...

It is important to remember that 2/3 of Canadians who actually voted in the last election . . . . voted AGAINST the Harper Conservative Reform Alliance Party. Democracy? . . . not in any sense of the word. Elections in Canada are a tribute to ignorance.

Elections in Canada are a tribute to a dysfunctional electoral system, that's what. We need PR.

I love the fact Simon that Harper hid in a closet something unfortunately lost on most Canadians. They should see their leader as a fearful coward who starts wars dis's vets and is a sneering potbellied pig.

hi David....thanks for that link. Vote swapping certainly sounds like something worth exploring. As you know I'm all in favour of the progressive parties working together to defeat the Cons, and I dream of the day when progressives will be united. Or at least that I don't die before that happens. ;)
But yeah, any ideas that can help us break the rut we're in are only too welcome...

hi Ray...I never forget that and believe it drives me CRAZY to think that we are more than them, but because we are divided and they are not, they get to rule us. At a time like this one, with the kind of enemy we face, its absolute insanity...

hi Anne...I don't disagree with you, but it will never happen until the Cons are defeated, and we can put pressure on a progressive government or a coalition, to bring about that change....

...but Simon... the 40% of eligible voters who did not vote democratically accepted whoever the voting majority preferred for PM of all of Canada... and that was the Harper Conservatives who only won 24% of the vote of 'eligible' voter (while the NDP won 18% and the Liberals only got 12%)!!!

then there is this: each voter goes into the booth, thinking, ABC, can't get over the fighting between the NDP and Liberals, oh hell I'm going to protest and vote Green. The morning after the election one small woman will wake up and say, I am now the P.M. of Canada and this country will survive.

Hey I can dream can't I?