The Ghomeshi Scandal and the CBC Management Cult 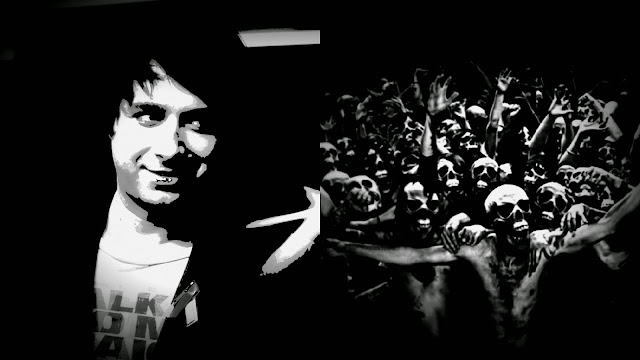 About ten days ago I wrote a post about the CBC and the Ghomeshi scandal, and I blamed its hapless managers for creating a cult of celebrity where such a horrible thing could happen.

Then came this shabby incident.

Which not only reinforced my belief that CBC management treats its "stars" like gods. It also convinced me that some of those managers don't know what they're doing, and should be fired immediately.

And now from the guy most responsible for exposing the Ghomeshi scandal comes this latest shocking revelation: CBC management isn't just promoting a celebrity cult.

The night Jennifer Harwood sent her email memo, titled "Standing up for Peter Mansbridge" to her CBCNN staffers, her husband Mark Harrison, the Executive Producer of The National, also tried to exact vengeance on Linden MacIntyre for his comments about Peter Mansbridge.

Or an out of control mob.

I mean can you believe it? The family compact didn't just try to ban the distinguished journalist Linden MacIntyre from the CBC airwaves, days before he retired after a lifetime of worthy service.

They actually tried to KILL his last story... 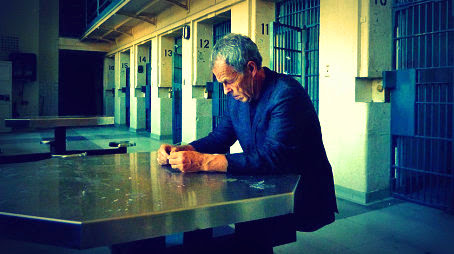 And not only that, another member of that management cabal, in an obvious attempt to curry favour with the News God Peter Mansbridge, actually suggested that MacIntyre be dragged before them and publicly HUMILIATED.

Harrison called an all-staff meeting of The National the next day, the purpose of which was to address the MacIntyre situation. At this meeting, CBC manager Paul Hambleton reportedly said that "we should drag MacIntyre in here and make him fall on his sword."

Which is so outrageous it not only makes me wonder whether any of those managers know what they're doing.

It also makes me wonder who is REALLY running CBC News, those petty managers or Mansbridge? 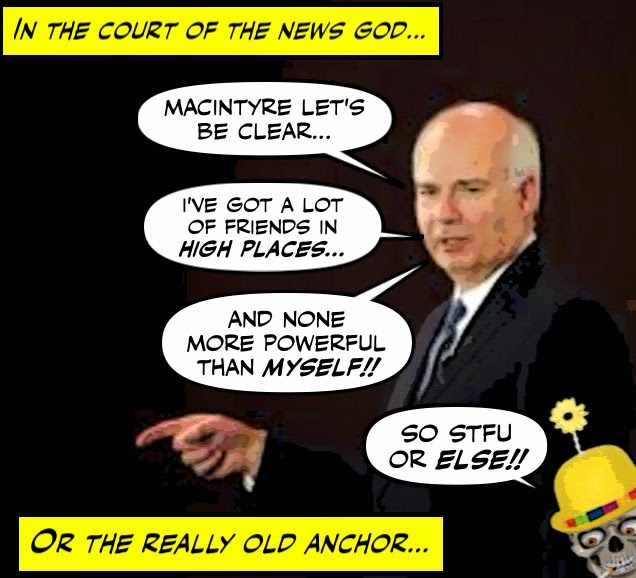 In an organization still reeling from the Ghomeshi affair, this new incident has CBC workers questioning how serious management really is about creating a culture where abusive behaviour can be reported by anyone.

"If they're willing to throw Linden under the bus," said one source, who did not wish to be identified, "imagine what they would do to a nobody who complained about Mansbridge?"

Because lest we forget, that's what this whole exercise should be about: explaining why it took so long to expose a bully, and making the workplace safer for young and vulnerable employees. 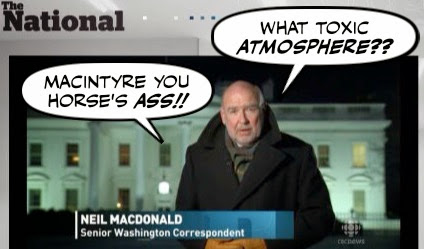 All right, spare me. Really. Linden MacIntyre is acting like a self-righteous horse's ass.

Yes, Linden, some people are more important and better-paid than others, even you, but I've never felt a "toxic" atmosphere, and I've never heard anyone at CBC News make any such complaint.

Because while MacDonald is one of my favourite CBC reporters, all he seems to have proven with that cheap missive, is that it is hard to detect a toxic atmosphere at the CBC building in Toronto, when you live and work in WASHINGTON.

And that since we now know that there is indeed a toxic atmosphere, you really shouldn't call someone a horse's ass, lest you be accused of being one yourself.

What’s beyond dismaying, in the end, is that CBC is supposed to be dealing with the Ghomeshi issue. It’s what inspired MacIntyre to speak out, as he was leaving CBC. The Ghomeshi case seems sidelined now and, given the allegations, that’s disgraceful. It would be fair guess that women who allege they put up with Ghomeshi’s antics would disagree with Neil Macdonald’s blithe dismissal of any “toxic atmosphere.’ Just another guy who doesn’t get it.

And really what more can I say that I haven't said before? Except that when the labour lawyer the managers have hired to investigate the Ghomeshi scandal prepares her report, she should remember two important sayings:

One, the truth will set us free, no matter how much it hurts. And two, when a fish rots, it usually rots from the head down.

And in the meantime those at the CBC should stop fighting each other, concentrate on protecting their young and powerless workers, show us how good they can still be, despite those demoralizing budget cuts.

And above all focus their efforts on exposing the nefarious activities of their REAL enemy.

For their petty infighting can only wound that precious national institution further.

But he will DESTROY it... 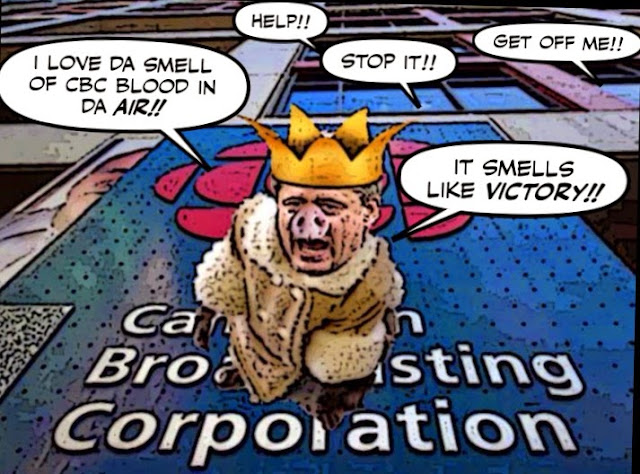 Hmmm, The CBC's behaviour toward Linden MacIntyre sounds alot like the vindictive behaviour the Cons exhibit when one of their own speaks independently.

All television networks are cults of celebrity. I know of one where the 'star' had decidedly pederastic appetites. His greatest skill was in keeping it quiet throughout the course of his career. How he managed I have no idea. The people in his network with whom I would periodically socialize would talk pretty freely about it but it was the 70s and none of them would risk doing anything about it.

hi Pamela....yup, it sounds a lot like bullying.to me, and a fanatic desire to "protect" a leader. Treating people like that in a public broadcaster is not right, and something is definitely wrong....

hi Mound...you're right TV does make stars out of people, and we are now in the throes of celebrity culture. But I expect a little more restraint from the CBC, and what struck me the most when I visited the Broadcasting Centre recently was the number of giant posters of their "stars" in the building itself. Posters so huge Leni Riefenstahl would have been impressed. And although I can understand why they might post such images on billboard across the country, the message the ones in the building seem to say is that they are gods, and who would dare cross them?