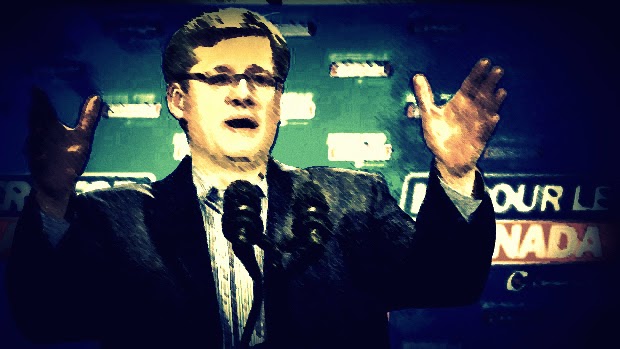 There is an old internet adage called Godwin's Law, that dictates that among other things, one can't call Stephen Harper and his Cons Nazis.

And I don't, because it also wouldn't be decent. It would diminish the deaths and the suffering of Hitler's many victims.

And of course, because it's not strictly accurate eh?

You really can't compare our bumbling Con fascists to those genocidal Nazi maniacs.

But Harper is a maniac, and he is killing our country. So I'm really glad to see that at least it's now OK to compare him to Benito Mussolini. 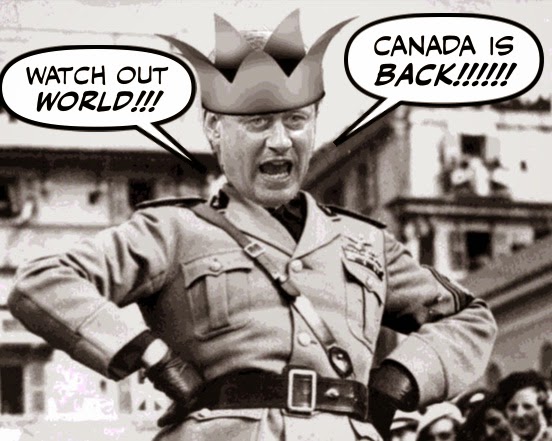 In The Comeback, a book about the social and political progress being made by Canadian aboriginals, Saul says the prime minister’s use of gigantic omnibus bills makes a mockery of democracy.

Because I have to agree with Saul, Harper is our Great Benito Leader.

He rules by fear, he muzzles his opponents. Mussolini forced his enemies to drink castor oil, Harper would make us all swallow his tarry bitumen.

And like that absurd Italian dictator, he also swaggers around the world stage making himself sound more important than he really is, blowing empty boasts and hot air out of every orifice. The pathetic poseur who would be our Caesar.

Or these days our Napoleon... 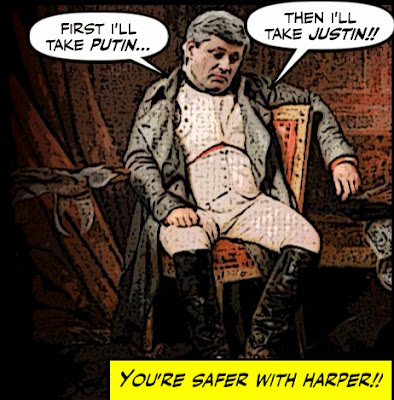 The grubby little Con who would pose as a Great Strong Leader, from the safety of a closet... 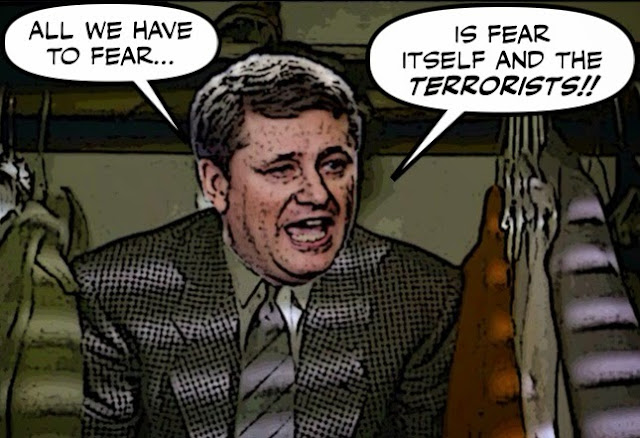 And claim that only he can win The Great War on Terror, save our precious freedoms, and protect us from those who would behead us in our beds.

While losing the Great War on Climate Change... 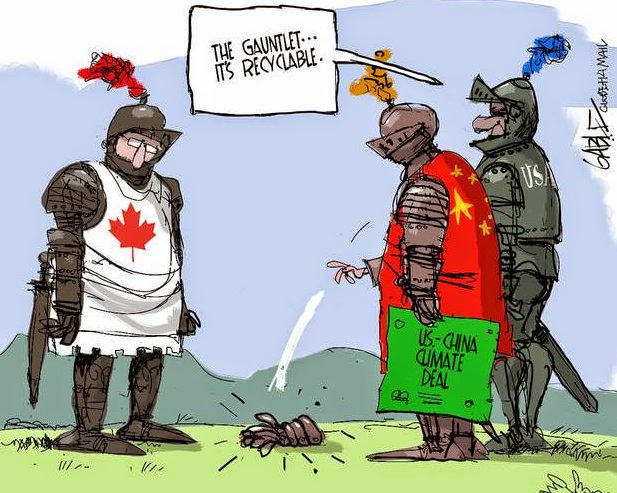 The one that threatens our very survival.

Even as he steals our freedoms, muzzles the truth, and continues his never-ending Great War on Democracy, in relentless pursuit of absolute power.

In the space of less than a decade, Canada has been transformed from a parliamentary democracy where the government of the day answers to the people through their elected representatives in parliament to a northern banana republic where parliament is daily frogmarched to the drum beat of Just One Man.

With its Parliament in shambles, its democracy turned inside out and upside down, Canada has gone from a first-world democracy envied around the globe to a reviled petro-state governed by a dictator in all but name.

And all within less than a decade.

You know, a thousand years from now historians will still struggle to understand how a big, beautiful young country could have fallen so low, so fast.

Or how a depraved leader could have fooled so many Canadians for so long. Or bought them so cheaply.

But for those of us who are still living the nightmare, all of this should give us fresh hope that it will soon be over.

Even in his monstrous Harperland, as it grows darker, and in the land we love fall turns to winter... 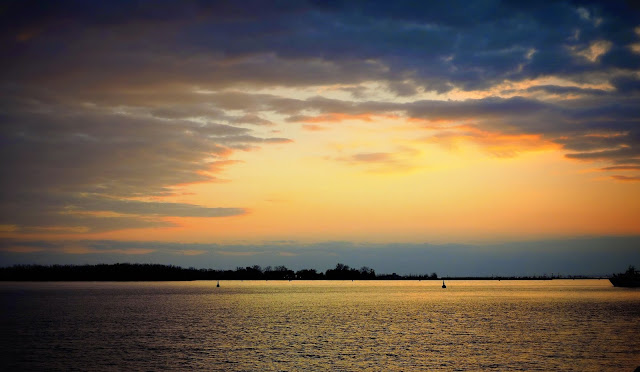 For they are signs that a new and better day is coming.

Because when a distinguished intellectual like John Ralston Saul compares Harper and his Con regime to fascists, you know that a barrier has been broken, that others will surge over it.

And that more Canadians will finally call a spade a spade, and a dictator a DICTATOR.

And that when this book is selling like hotcakes... 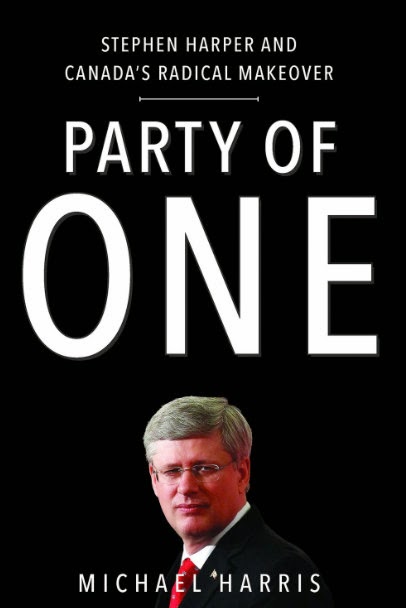 You know we're riding the wave of history. And that our dictator's days are numbered.

He never was our Hitler, he was just a shabby fascist, more like our Benito.

But I wouldn't be surprised if on his last day in power.

The scene in the PMO bunker looked a lot like this one... 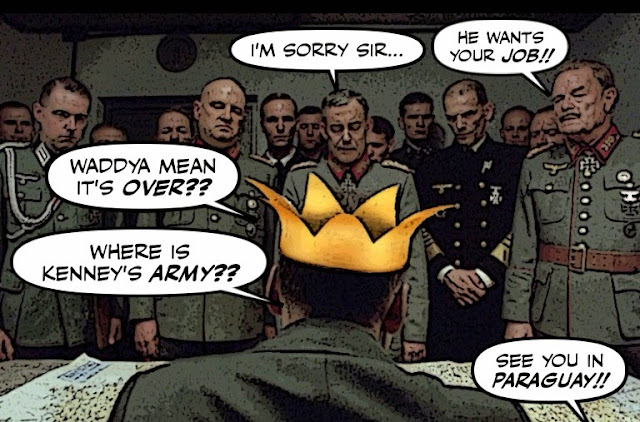 And I do know what Canadians will be shouting in the streets, or out of their windows.

If they can make themselves heard over the sound of honking horns, bells and fireworks.

The Dictator has fallen !!! The nightmare is finally over !!!

I'll be dancing on my lawn. In the snow if it's there.

one more one more, who can escape this propaganda truly.

Harper and his government are indeed fascists. Not Nazi-style fascists, but fascists all the same.
https://en.wikipedia.org/wiki/Fascism

"Fascists sought to unify their nation through an authoritarian state that promoted the mass mobilization of the national community and were characterized by having leadership that initiated a revolutionary political movement aiming to reorganize the nation along principles according to fascist ideology. Fascist movements shared certain common features, including the veneration of the state, a devotion to a strong leader, and an emphasis on ultranationalism and militarism. Fascism views political violence, war, and imperialism as a means to achieve national rejuvenation,and it asserts that stronger nations have the right to expand their territory by displacing weaker nations".

I have no issues calling the Conservatives fascists. While they may not check every box on the how-to list, they definitely get a passing grade.

It is unfortunate that the spectre of Hitler is still firmly attached to fascism, as that makes it too easy to dismiss the claim that a government, like our government, embodies and embraces fascism. Society tends to view fascism as though it existed only in a brief bubble of time, which is to our collective detriment and allows the Cons to bully their way through governing.

My husband and I are reading Party of One and feel it should be mandatory reading for every voter in Canada.

Mussolini was not Hitler, and was not even PERSONALLY antisemitic, but he wound up in bed with Adolf Hitler, and enacted the Manifesto of Race, or racial laws, in 1938. This thing reads like a sick farce, declaring Italians to be of the "Aryan Race" (you know, they are all tall, blonde with pinky-white skin, little noses and flaxen hair).

Since that is of course bullshit, an old friend of mine spent the war years as a girl with her French family of Italian-Jewish descent, with a handy "Certificate of Aryanity" and the same features as any other Italian.

Some scholars, especially in countries such as Chile, Argentina and Uruguay, draw a distinction between fascism and their own military dictatorships in that the latter were far more committed to unbridled free-market capitalism. Eduardo Galeano: humans in prison so "capital could be free". But this does not concern the elements you state.

hi anon....well I once promised some friends in Montreal that I would run naked down Saint Catherine's Street the days are the Cons are defeated, so I hope it won't be snowing... ;)

hi Steve...I hate to say it, but whatever you had to say has been deleted by the Con Ministry of Truth. Big Brother is EVERYWHERE... ;)

hi Noah...yes it is unfortunate that fascism has come to equated solely with Nazism, when in fact it can take many forms. It's also unfortunate that so many in our society are so ignorant or politically unsophisticated that they are completely clueless about what is going on. But there is a fascist beast loose in the heart of the Con regime, and all it would take is some catastrophic event or a terrorist attack to launch itself upon us. If you see what's happening in Britain and some places in Europe, and of course the U.S., it's easy to see that the Cons are just acting like the other right-wing regimes, and they would all take us to the same place. If it walks like a fascist, or quacks liker a fascist, is probably is a fascist...

hi anon...I agree, it should be required reading. I haven't got a copy myself yet, but I will get one, and I shall quote from it liberally on this blog, and help spread the message by lending the book to any friends who want to read it. We all should...

hi lagatta...that's interesting, I didn't realize that Benito had introduced racial laws. I've always seen him as a blustering blow hard but never as evil as Hitler. Although his actions in Abyssinia were criminal and genocidal. But I have studied the dictatorships in Argentina and Uruguay, and read the reports that were produced in both countries after civilian government's were restored. And while the Argentinian fascists were more brutal, they were part of a tradition of military coups that followed the end of the Peron regime. The situation in Uruguay was even more frightening because they emerged from a society that was once a model of democracy. So I have no hesitation in saying that if it could happen in Uruguay, it could happen here...

hi David...yes I actually remember that post. I've tended to stay away from the F-word for some of the reasons I've mentioned above. But I will not be as shy anymore...

harper as a fascist. interesting. good point and like Mussilini he fell in with a very bad group. Mussilini with the Nazi's in Germany who in fact had way more influence on Italy than it ought to. Con harper, what did our little fascist do? He got into bed with China and gave them more control over our country than we the citizens of Canada do.