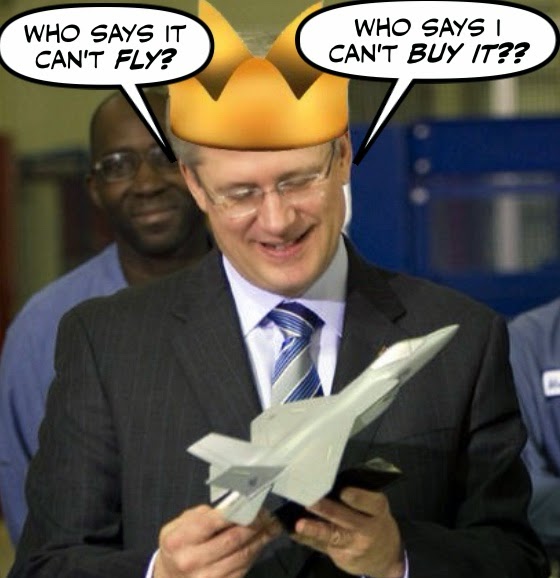 Two years ago he told us that he was pressing the "reset button" on his plan to buy 65 F-35 fighters from his friends at Lockheed Martin, after it was revealed that their cost would blow Canada up instead of the enemy.

He promised us his corrupt regime would look at other slightly cheaper warplanes, and hold an open competition.

But it seems that nothing can shake Stephen Harper's insane obsession with the F-35, even though with only one engine it's totally unsuitable for patrolling Canada's vast Arctic spaces.

And today we found out that he has secretly ordered four of them.

A leaked Pentagon briefing says Canada has signalled to Washington that it wants to buy at least four F-35 stealth fighters, but a spokesman for Public Works Minister Diane Finley insisted Friday that no decision has been made.

And although the PMO scrambled their fearsome warthog Diane Finley to deny the story... 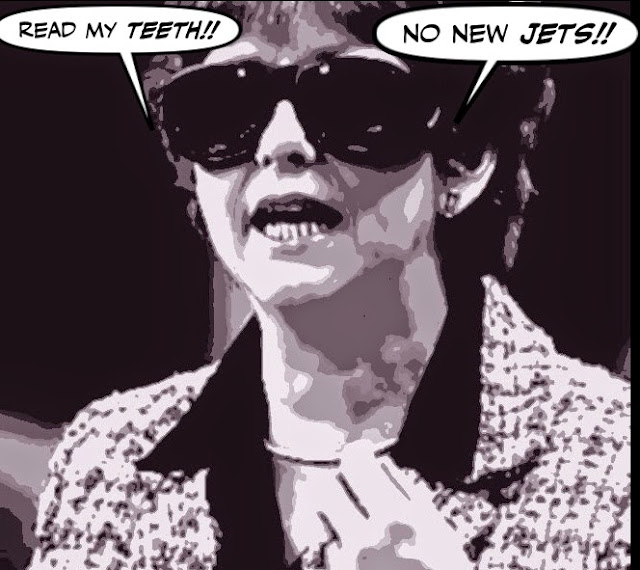 Who would you rather believe? A Con like her, or the Pentagon?

The slide presentation, delivered to the secretary of the U.S. Air Force on Oct. 27, 2014, shows Canada has asked to swap places with the Americans and place the order in the current fiscal year, which means a possible delivery date of either 2016 or 2017.

The presentation by U.S. Lt.-Gen. Chris Bogdan — head of the F-35 program at the Pentagon — also said the U.S. project office has begun the process of notifying Congress.

Who could possibly believe that the Big Lie government will buy only FOUR?

Alan Williams, a former official in charge of defence procurement, said it's hard to imagine the government only buying four aircraft and what the letter of intent will signal — if and when it is sent to the Pentagon— is de facto approval to proceed with the F-35.

"You can spin it any way you like," he said. "Once you've dipped your toe into the water, your foot will follow."

And yes, it is outrageous.

After question period Friday, NDP defence critic Jack Harris called it "outrageous" that the government appeared to be going ahead with the F-35 in spite of all the controversy surrounding it.

And the only question is why is he doing it, and what's the big HURRY? 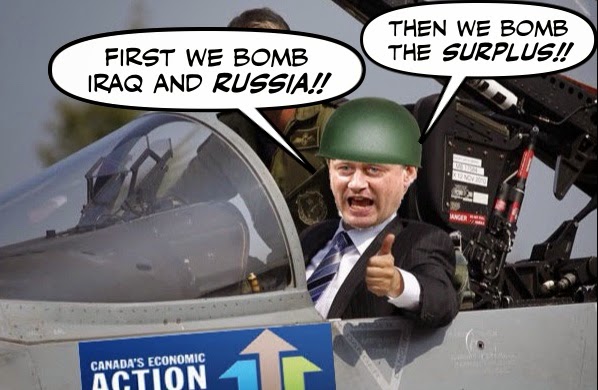 And the only reasons I can think of is he wants to take advantage of the war fever sweeping the land, to lock Canada into a contract it won't be able to get out of without surrendering its wallet.

And he wants to make sure that even if he is defeated, any future government won't have the money to rebuild the social safety network he has destroyed. Because let's not forget that government was, is, and always will be his PRIMARY target.

Now I'm not going to get into all the technical reasons why this stealthy purchase makes absolutely no sense. Except to point out that drones or pilotless warplanes are the future.

Like this one landing on the deck of a US Navy aircraft carrier...

And it might be a good idea to check out that future, before we're stuck with our own obscenely expensive boondoggle.

And are forced to play catch-up all over again... 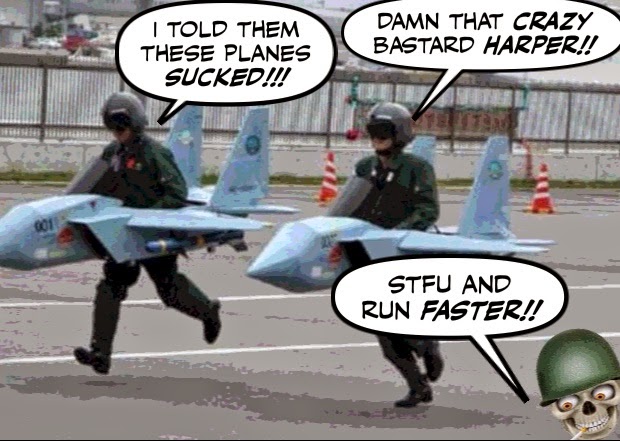 Which I'm sure we all agree would be a really bad joke.

But what this latest exercise in deception tells us is that one, Stephen Harper and stealthy gang of liars and cheats cannot be trusted as far as one can SPIT.

And the CIA really must have something on him we don't know.

And three, that we won't be truly safe until him and his filthy Con regime are defeated.

And this grubby Con artist is sent packing... 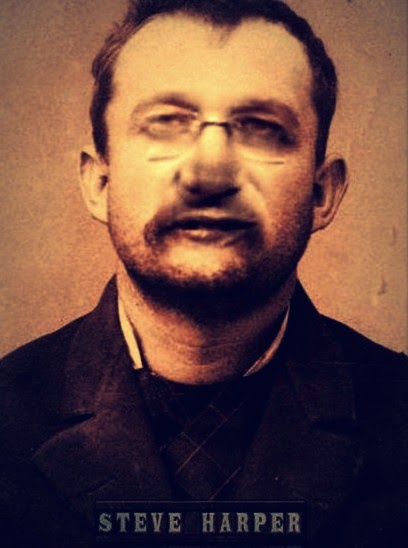 Before he robs us blind.

Before he steals our future...

The Cons knew before the 2011 election of the cost overruns involved with the purchase of F-35 stealth fighters, senior officials claim.

The F-35 is awesome for the economy:

"More than 110 Canada companies have participated in the development and production of the F-35, and more than 80 Canadian companies are performing work today.
According to Statistics Canada model projections, the F-35 production work will support thousands of jobs over the life of the program."

Who would you rather believe? A Con like her, or the Pentagon?.....Jeeez Simon,any chance of providing a third option for that question?
Anyone believing anything coming from the Pentagon before,during or after Rumsfeld is gullible beyond the meaning of the word.
As for Ottawa.Seems the shooting fiasco and Del Mastro, has been replaced,and rather quickly I might add with sex.Nothing like sex sex sex to take peoples minds off important things.And while the people might find all that somewhat entertaining,those same people,that would be us,are the only people really getting fucked here.
Simon,far as I'm concerned,when I factor out the lies,the bullshit and 95% of the mainstream media there's really not many left to believe.

The upside to the F-35 is that with their poor performance capabilities and terrible reliability record they would never make it to the Mideast. Result; fewer civilian deaths and no dumptrucks would be injured in this shamless political pandering.

Your right Simon, the Reformacons are determinted no money is left to build a better Canada. Harper is totally fixated on a 18th century recreaction.

The fix is often in with defense procurement. Once the loot is passed around , one of the cronies retires, grabs the pension and slithers off to an new job with a weapons maker.

Harper is in a big hurry to reward someone with taxpayer cash. He must be worried that he will have his old dead hands removed from the till soon.