Julian Fantino and the Cons Scam the Veterans. Again. 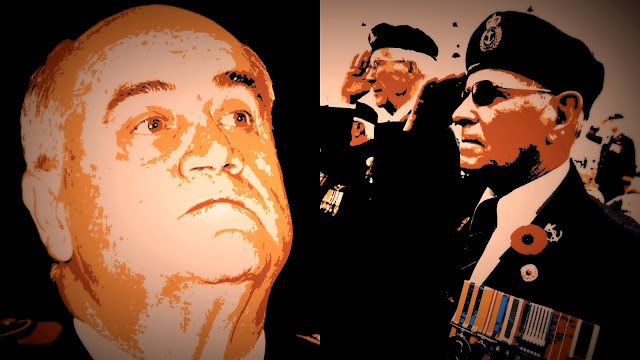 It's hard to believe that even when they claim they are making up for treating veterans so shabbily.

Still they can't control themselves.

And still they would scam them.

The federal Conservative government has trumpeted a new commitment of $200-million to help veterans deal with their mental-health issues, but it has been less vocal about the fact that the money will be paid out over the next half a century.

Veterans advocates and opposition politicians accuse the government of deliberately misleading Canadians about the scope of the new investment, which was announced just before the release of a report critical of its treatment of former military personnel.

Or run over them again... 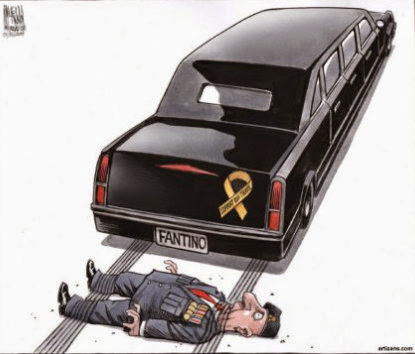 And I can only imagine how the veterans and wounded soldiers who have been waiting so long for help are going to react.

“It is deceptively caustic to the trust and the well-being of the veterans because they are waiting for services now,” said Sean Bruyea, a retired military captain who is a defender of veterans’ interests. “For them to say to veterans, ‘You’ve already given your sacrifice to Canada, but we are going to delay your payment for that sacrifice for another 50 years’ – how absurd.”

But I think it's fair to say that any bridges the Cons were hoping to rebuild with vets before the election, have just been blown out of the water.

Along with Julian Fantino's gondola... 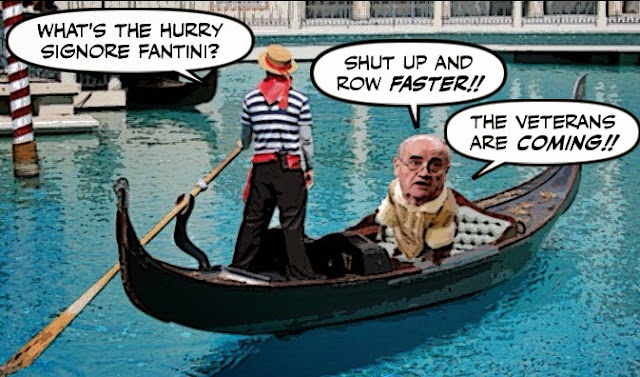 For he's got some explaining to do:

Veterans Affairs Minister Julian Fantino, who is travelling on official business in Italy this week, released a statement saying the government’s action plan “supported by our $200-million investment will further improve an already strong continuum of mental health supports and services.”

And it's not going to be pretty. Because he's now going to have to explain why the Cons stole $1.1 BILLION from the veterans and made a big deal about returning $19.1 MILLION.

Oh boy. I think you're going to see a lot of angry veterans on the campaign trail. And I'll be proud to join them.

For all those who still suffer in silence...

And all those who lost hope, and killed themselves.

You know, I can't describe the pain I've seen, or properly describe the grubby way the system treated one of my friends. And how I had to fight so hard to help him it almost killed ME. Or how ashamed I was that this could be happening in Canada. Or how angry it made me to see him humiliated.

At the end of the week like this one, I don't have the strength to tell that story.

Nor can I explain why the Cons are doing what they are doing, or whether it's malice or incompetence, as Bruce Anderson tries to figure out here.

But this is true:

The Auditor-General reveals the department is Scrooge-like when it comes to giving veterans the mental-health services they’re entitled to. We’re talking about people who are seeking medications to deal with the scars they have from service on our behalf. Not all-expenses-paid trips to Florida. The department, apparently, is slow to respond, and says ‘no’ more often than it should.

For photo opportunities the Conservatives are happy to stand with Canada’s military personnel. But for help in times of need, not so much.

So this doesn't really matter.

Because what can't be denied is that what's happening isn't just disgraceful and un-Canadian, it's evil. Those who enable evil are by definition evil themselves.

So the vet's message should be a simple one:

The Cons are unfit to be a Canadian government.

And these two clowns bastards should be FIRED... 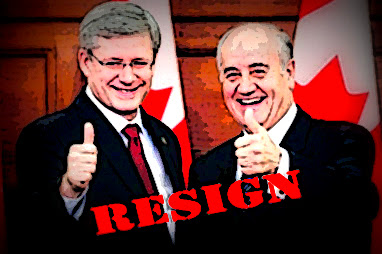 For they really are shameless.

They really are Con artists.

And they're really good to go...

Harper intends to drag this out for as long as he can. That way, many more of our Veterans will have passed away.

All dictators have very similar characteristics. Stalin, Hitler and Mussolini were all paranoid control freaks. They all lied, deceived, were corrupt, thieved, used dirty politics, dirty tactics, were sociopaths and all of them cheated to win. Harper's personality, fits the same profile.

I often wonder, what do Harper and his cabal tell their kids? When I talk politics with my, little six year old Granddaughter. There is no guile nor greed, just what is right and what is wrong. Mind you. My Granddaughter is already doing grade three so, she certainly has the edge on Harper.

Hi Simon
I was just going to post on this but as you already have, perhaps you'd like to add this as a footnote to yours.

Thing is - this is the second time they've done this.

On Nov 17,2010, the G&M headline read : Disabled veterans to get higher payments

"The substantial improvements to veterans benefits proposed Wednesday by the Conservative government aim to do more than aid those injured in body or mind while fighting in Afghanistan.
The new legislation offers a $2-billion solution.. "

but then it turned out later the amount was to be spread over 50 years, same as this time!

Heh. "Please prove you're not a robot" window thingey on my last comment was "1984"

Paying out $200 million over 50 years? Sounds reasonable. What's next for the Cons.... inventing a new weekly lottery ticket where a person can win a million dollars-- but the winner is paid a dollar a year for a million years! 8-)

But these assholes will think of nothing to spend an extra $20 billion on a white elephant fighter-jet. Or tens of millions to launch these air-strikes against god-knows-what in Iraq and Syria.

hi anon...as I said in my post I simply cannot understand why the Cons would act this way, it doesn't make any political sense. And it simly isn't decent, or the way people should be treated in Canada. But as i always have to tell myself, don't get angry just get even. And do what you can to defeat the Cons and drive them out of office. I think the vets are going to be a mighty moral force in the next election...

hi Alison...thanks for that. They tell you you should always read the fine print, and anything the Cons produce needs to be examined under a microscope. I've never seen anything like it, everything thing they do seems to be engineered for deception. And is carried out in a moral vacuum. So they shouldn't be surprised if people accuse them of acting like criminals...

hi Alison....OMG. I was worried the Cons were in my computer. But that definitely proves it... ;)

hi David...It's the deception that shocks me. They really must think that we are all fools...

hi mogs...he is trying to buy votes, but the vets were already wary of the Cons, and after this they won't trust ANYTHING they say...

hi thwap...you're right, they've got money for everything, including $600 million of porky ads, and what I'm sure is a hugely ineffective but massively expensive campaign in Iraq, but they have kept mentally ill people waiting for help for years, They are beasts and that is all...

Hi Simon. It only makes sense when we realize that it is what dictators do. It is Harper exercising his power. They'll do the public fan fare and hope that no one reads the fine print. Even then they think after a short while the public won't be interested and the MSM will certainly help in that. Tyrants aren't aren't interested in doing the right thing, only in aquiring power. Harper feels he does not have to explain anything to Canadians. He's just following his authoritarian agenda as he gives the finger to Canadians. Harper doesn't govern, he pursues power. Everything he does I see in that context. We have a real live dictator on our hands!

If the scumbag Harper pulled the same stunt with regards to giving the oil patch a tax break but spread it out over 50 years he'd be out of a job in a week. As for Fantino, he has had a less than stellar history with police forces and political positions throughout his career, the reports of which can be found on Wikipedia and no doubt elsewhere including official documents.

Many years ago, Kings and leaders would march at the head of their armies, would that this were still the case but the cowardly dogs we have in positions of political power today would all run away with their tails between their legs leaving those proud members of the armed forces to stand up for what the politicians profess to support.