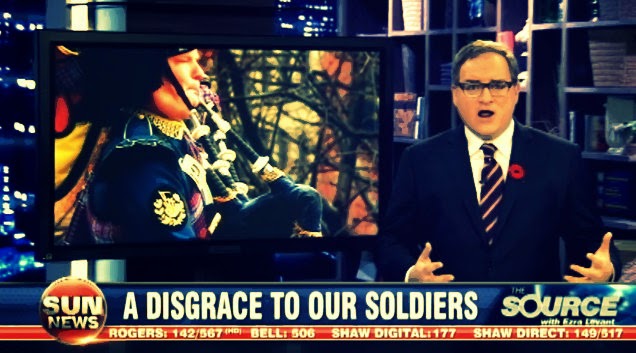 Ezra Levant is without a shadow of a doubt the most disgusting person on Canadian television.

A greasy, grubby oil pimp, a far-right demagogue, a bully and a bigot.

But even by his low standards, this is absolutely outrageous.

A school board in southwestern Ontario is trying to correct the record after Sun Media personality Ezra Levant incorrectly accused it of kowtowing to Muslim students who wanted to avoid commemorating Remembrance Day.

Because it's bad enough that he should twist the school boards's message to suit his perverted purposes.

In fact, the school board says, its memo had nothing to do with Muslim families. Rather, it was a response in part to safety concerns raised by parents whose children might be attending public memorial events.

But his deranged racist rant beggars belief, and should offend all decent Canadians: 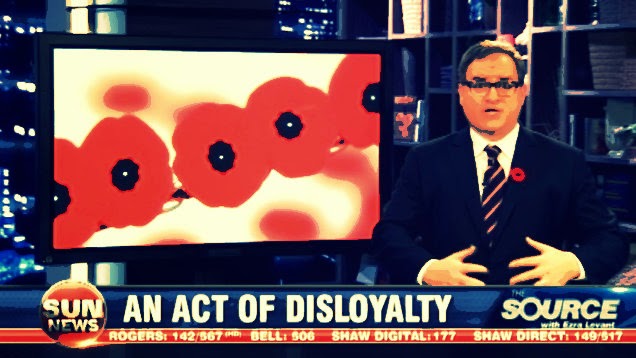 “It's a disgrace that any family would object to it – especially an immigrant family who came here to benefit from our country. It would call into question the basis on which they applied for and were granted citizenship.

“Could you imagine if a German or Japanese family objected? The obvious question would be: Do you think Hitler or Mussolini or Hirohito were right? That’s the implication of Muslim families objecting to Remembrance Day – that we were wrong.” 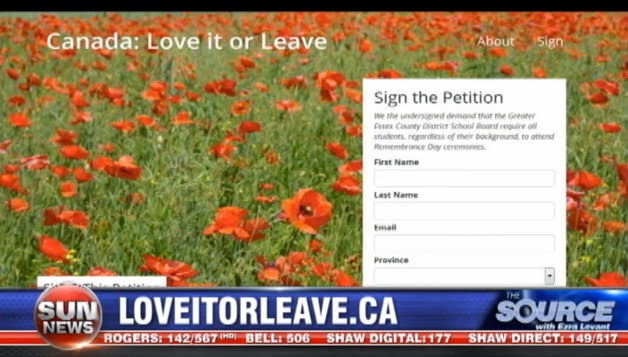 And this is simply obscene... 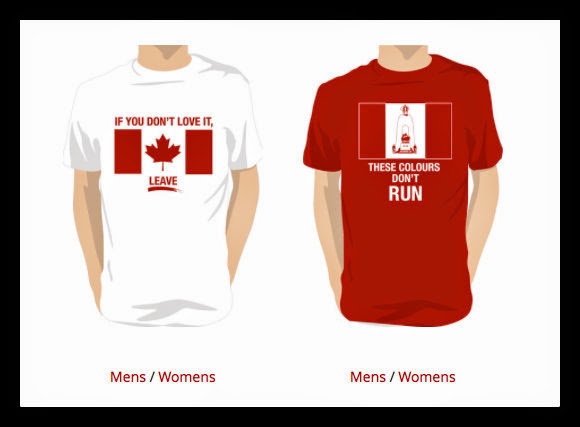 For not only does it appeal to the base instincts of the low life bigot rabble in this country. The mouth breathing Con mob that exudes hate out of every groaning orifice.

It couldn't come at a worst time. At a time when Stephen Harper has the Fear Factor set on high, militarism is on the rise, and innocent Muslims are being targeted.

Patrons of a mosque in St-Jean-sur-Richelieu, southeast of Montreal, fear further anti-Islamic attacks after a piece of concrete was thrown through the front window in the middle of the night Sunday.

We're scared, we don't know who would do that – we have kids who come here -- what would happen if this happened while they were here – everybody is scared, we don’t know what’s going to happen after,' mosque worshipper Mohamed Moussa told CTV Montreal.

And Levant's grubby eruptions can only make things worse... 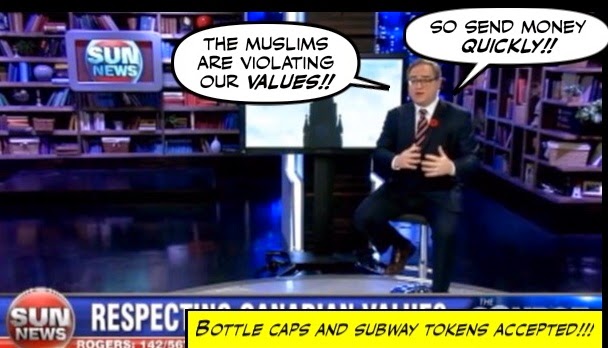 So you might think that Sun News would apologize, but if you did you'd be wrong. Because they're blaming the school board for the "miscommunication."

And allowing their readers to freely threaten immigrants... 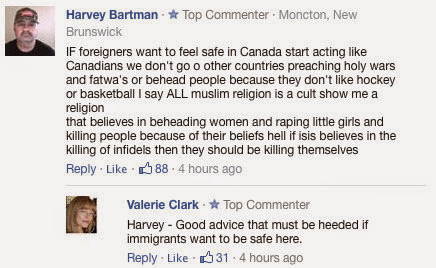 But then the shameless Cons at the Sun also printed this racist cartoon of Olivia Chow a few days before Toronto's mayoral election... 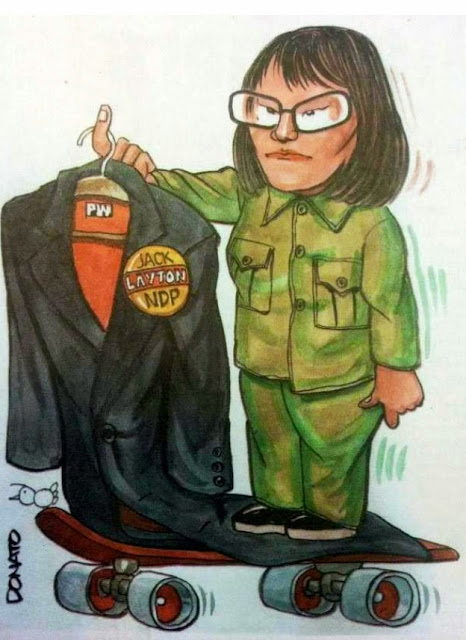 So what do you expect eh?

And their readers and viewers are a special group of people... 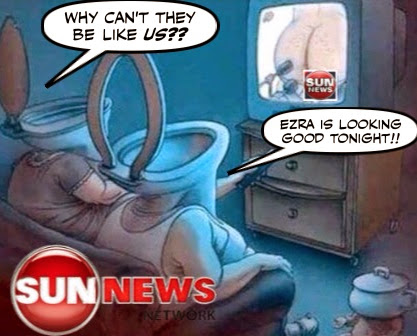 Who need to flush their heads more often.

But of course the most disturbing question is this one: Since Sun News is practically the house organ of the Con regime, are the freaks in the PMO encouraging Levant's depraved behaviour?

So their equally depraved leader can fan the flames of anti-Muslim hysteria, further divide Canadians, and use bigotry to win the next election. 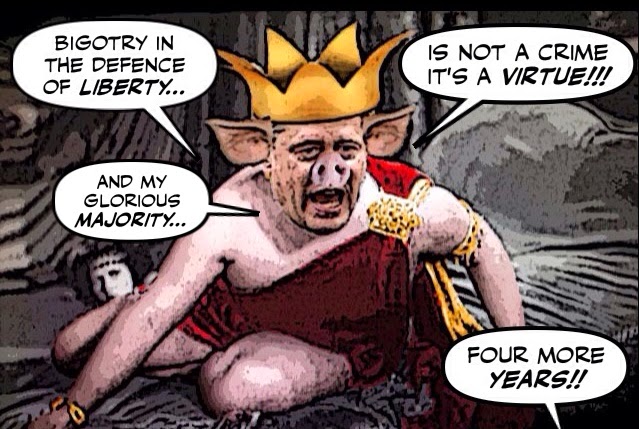 And you know what? I wouldn't be surprised.

Because every time I played this video version of Levant's racist rant.

A government ad played before it. So you really have to wonder whether the Cons are subsidizing that foul network.

Harper and Levant are birds hogs of the same feather.

We won't be safe until we defeat the tyrant.

And our airwaves won't be clean until this monstrous freak is FIRED... 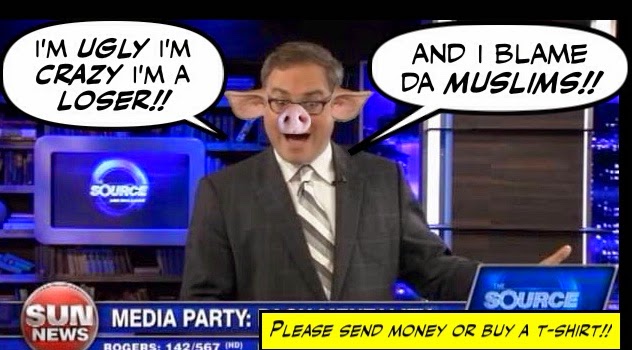 .. dear Simon .. relax on the Ezra self destruct .. Like a mad or deranged bricklayer he's just erecting walls and bizarre shrill legacy. He's kind of got the Boomerang Thang going on..

By screeching his screed.. he instead boinks n strokes himself and the distorted interests (of people) who can lift tbeir reptilian heads, like his.. to the upper heights of wagon ruts in boreal bogs or tailings swampland

Canadians that are concerned, coherent, observant.. should consider funding this loud piece of puffery.. as he provides an excellent service. After all.. was it not Ethical Oil Ezra that stepped aside so Stephen Harper could assume his current federal riding? Just think about that. Ezra foresaw a potential Prime Minister.. albeit one who would hide in a broom closet after the gunfire and threat from a dispirited deranged crack addict had ended.

Personally.. I await Ezra's skewed concerns, that as ordinary Canadians, we have not a shred of a Coroner's Report.. or recap of what the vaunted flaunted, all-seeing Harper Government surveillance cameras & systems recorded.. re the Ottawa gunman's attack.

Instead we get Ezra's breathless and out of the blue Muslim hysterics.. regarding an Essex Ontario schoolboard.. on Remembrence Day.. when we should be asking if the gunman attacked with only 7 shells.. or was shot deservedly to doll rags .. even dead.. prior to Kevin Vicker's heroism.

One infers the dead gunman had no extra ammo.. Zero .. and likely an empty rifle ...
What 'government' such as Harper's would not hype that the gunman had lots of ammo
unless it knew the pitiful truth would not be deniable

Thus we get Ezra... screetching in his and Harper's echo chambers
Hoping for distraction..

As another blogger pointed out.Levant knows exactly what he's doing.His job is to creat division by stirring up hate.
He's not insane just evil.As for his followers who agree with him,now that's insane.

You shouldn't be surprised, Simon. This is EXACTLY how the teabaggers in the u.s. scare up (literally) votes. There are no real progressive pundits allowed on 'murcan t.v., only ultra-rich or ultra-right fanatics who preach either fascism or extreme nazionalism and that is what you are seeing here. sun media is only the Canadian extension of faux news in the states. They are both in collaboration with the c.i.a.-linked organization responsible for the huge rise of fanaticized right-wingers stealing office in both countries. See Blacklisted News for that story.
R.I.P , Canada. Once there were places like Canada and Camelot now both relegated to myths and legends.

Ezra Levant ends each show saying he is "fighting for freedom", "fighting for your freedom", etc. Sometimes a special website is created so Sun News Network viewers can contribute to a special fund to assist people going to court, etc. Would Ezra fight for the freedom of Greater Vancouver-based writer David D. Fowler? (not me!)

Harper wants to own his own tv station

The bombast that has greeted the planned arrival of the network -- which needs a lot of regulatory help if it is to sit beside CBC News Network as a "must-air" channel on cable and satellite services -- has seen Sun News's frontman, new Quebecor executive Kory Teneycke, appearing before the media to explain the network's mission to Canadians.


Ezra Levant serves at the pleasure of Sun Network News vice-president Kory Teneycke — who, you may recall, used to be Harper’s director of communications and today answers to Brian Mulroney. Before that, Teneycke was an advisor to Preston Manning and the Reform Party. Levant was, of course, director of communications to Stockwell Day, ex-leader of the Reform/Canadian Alliance, the right-wing precursor of the modern Conservative party. And, as we know, Harper took over from Day. It’s all one big, incestuous Tory family, isn’t it?

So Calandra and Levant work, in effect, for the Conservative party.


And, Brian Mulroney will oversee the voter manipulation in Quebec.

Mulroney sits on the board at Quebecor Inc. and his Norton Rose law firm does the legal work for Power Corporation.

Power Corporation's Square Victoria Communications Group controls La Presse newspaper along with 6 daily newspapers in Quebec along with being a major component controlling the Canadian Press.

This guy wishes he were American