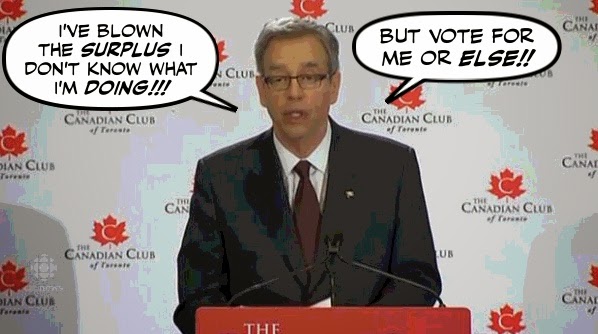 It was hard to imagine a scarier sight, than old Joe Oliver delivering his fiscal update to an audience of Bay Street business types the other day.

And announcing that Canadians should support the Cons, because he's blown the surplus trying to buy votes.

So they can't trust the opposition to run or ruin the economy!!!

Canada will see a razor-thin $1.9-billion surplus in 2015, Oliver said today, after the Conservatives committed billions to tax cuts announced weeks ago. And that narrow surplus is a number that the Conservatives are already using to argue that only they can keep the country's economy on track.

Because while it's true that he has recklessly shrunk the surplus, for crass political reasons. 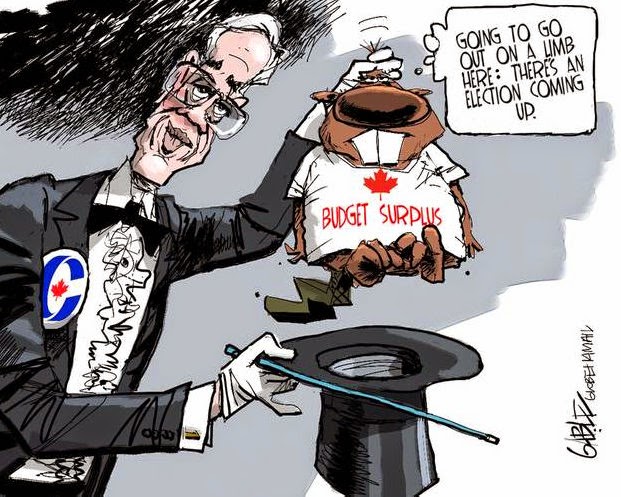 Sorry, Justin Trudeau. Tough luck, Tom Mulcair. We’ve spent all the money. There’s nothing left. That, in a nutshell, is the message Finance Minister Joe Oliver delivered to the opposition parties Wednesday in a particularly partisan economic update.

Economic updates always had a political purpose. Now, politics is their sole purpose. The aim of this update was to put the opposition into what the Conservatives hope is an impossible bind.

And no doubt Stephen Harper and his hapless stooge Oliver are congratulating themselves for having stuck it to the opposition... 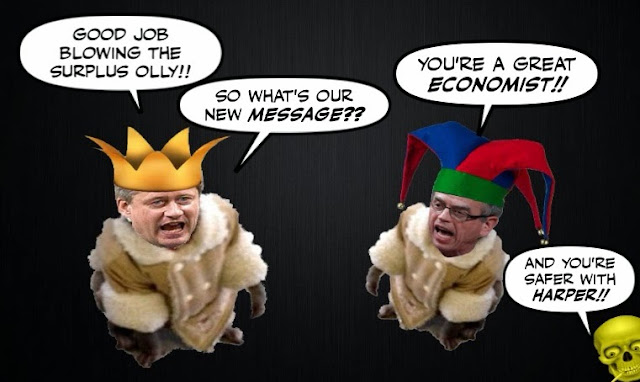 That isn't a reason to vote for the Cons, it's yet another reason to drive them from power before they lead us to economic and social DISASTER.

Because not only does Oliver's message make as much sense as the time he tried to convince us that the water from the tar ponds was safe to drink... 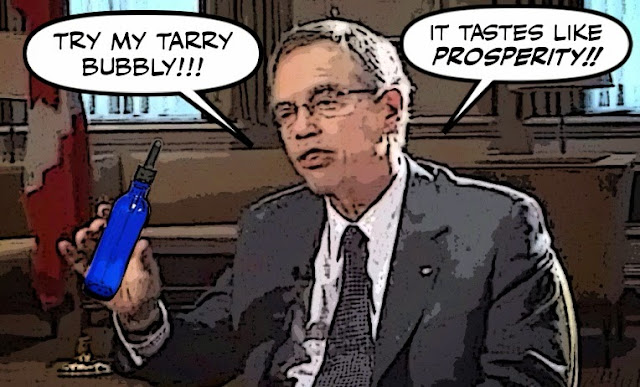 On the one hand, he emphasized how badly the world economy is doing, noting that Europe is in dire straits and that even mighty China is slowing down. The political message the Conservatives hope to convey from this is that in a fragile world, Canadians need solid, stolid Harper at the helm.

Yet on the other hand, Oliver described the Canadian economy as a singular success – an oasis where jobs abound and incomes are rising.

It's so crass and irresponsible it deserves to be denounced.

The Tory fiscal narrative deserves to be shown up for what it is: a dubious mix of bad policy and sheer flim-flammery.

It isn't the final word, and there are better options:

Much of the money Harper is frittering away would be better redirected to help underwrite the NDP’s affordable national child-care program, or to bankroll the additional job-boosting infrastructure, higher education and health care that both major opposition parties have rightly identified as priorities. That would provide more benefit to more working families and grow the economy.

So the opposition parties shouldn't hesitate to criticize the Con's sleazy plan. Show Canadians from what bleeding wounds in our country that bribe money came from.

Or how they are getting SCREWED.

And I can't think of a better way to start, than by taking Oliver's scary speech to that business audience.

And adding the truth AND a music track....

So everyone can see what a scam it really it is, and why those Con artists should be defeated, and if necessary jailed, before they rob us blind.

Right now Stephen Harper is trying to pose as a Great Warrior Leader AND a Great Economist Leader... 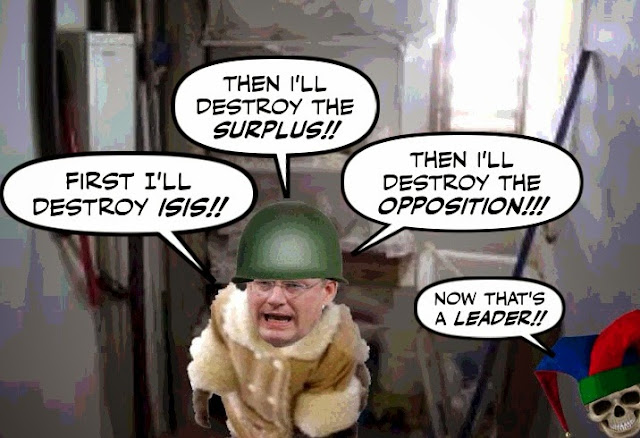 And getting away with it, in the hysteria of the times, even though of course he is neither.

But war fever will fade, and the economy will come back to haunt him. Especially if the price of oil keeps tanking.

And when combined with the Con's ghastly record, and the desire for change.

What looks so good right now.

Will still end up destroying him...

You can bet Oliver is playing down the amount of the "surplus" now, but will announce an even bigger "surplus" in 2015. The Cons can play with numbers back and forth, depending on how many goodies they want to first lock in prior to the election. Keep in mind the Cons' "surplus" is created by cuts to programs, and their plan to reduce certain transfer payments to the provinces.

Economists debate what the fall fiscal update and a balanced 2015 budget really means for Canadians
http://www.cbc.ca/thecurrent/episode/2014/11/13/the-cost-of-a-balanced-budget/

I see Oliver, like Harper, talks to anyone but the Canadian public. Isn't the Minister of Finance supposed to present the budget in Parliament?

Of course the budget should have been presented in Parliament. However, that would be done in a democratic country. Harper has turned Canada into a dictatorship. Oliver called Canadians eco-terrorists and wanted Harper's RCMP police state, to set up an anti terrorist squad. Oliver's budget is laughable and a ridiculous joke, as all of the so called Harper Cons are a laughable joke.

Oliver is nothing other than another one of, Harper's lying, deceiving, corrupt cabal.

I have just purchased Michael Harris book called Party of one. Harper was groomed by the Republican party and their financier Finkelstein and the Kosh Brothers Harris points out how they did and how much they financed Harper, all in the name of big oil. Harper is a criminal and has to be put down or all us Canadians are sunk. He even has the same lawyer which should be bared for practising law. You also need to read how they did the robo calls. Sona was not alone in this. He was set up to be the fall guy and thrown under the bus so he may soon point fingers on the instigators and throw the Cons under the bus,

On the news tonight it mentioned Harper was not going to talk to Putin at all this weekend.

Since then, Harper changed his mind:

Harper tells Putin to 'get out of Ukraine' in G20 encounter