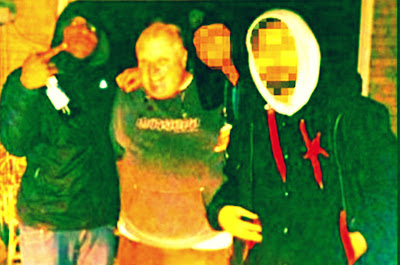 He has been drunk as a skunk in public.

He has given women and children the finger.

He is a crass, vulgar bigot, and the worst Mayor Toronto has ever known.

A cellphone video that appears to show Mayor Rob Ford smoking crack cocaine is being shopped around Toronto by a group of Somali men involved in the drug trade.

“I’m f---ing right-wing,” Ford appears to mutter at one point. “Everyone expects me to be right-wing. I’m just supposed to be this great.…” and his voice trails off. At another point he is heard calling Trudeau a “fag.” Later in the 90-second video he is asked about the football team and he appears to say (though he is mumbling), “they are just f---ing minorities.”

And if those allegations are true, explain what he was doing in that kind of company. And why he feels that way about the kids he coaches... 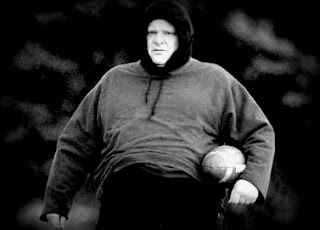 Or explain this bizarre behaviour.

Minutes after Mayor Rob Ford arrived at a contentious community council meeting in Etobicoke on Tuesday evening, he bolted out of his seat, sprinted up an aisle, and left the building — to wander around the parking lot and slap “Rob Ford Mayor” fridge magnets on the doors of cars.

For this could only happen in Ford's Toronto eh? A mad house if ever there was one.

And so could this foulness.

Councillor Doug Ford is warning Torontonians that a shower-equipped bicycle station to go under Nathan Phillips Square will turn into a “bathhouse.”

Later, during heated debate on the council floor that focused on the cost of the project, Councillor Ford shouted: “It is going to turn into a bathhouse . . . there is going to be hanky-panky. I guarantee it.”

Because only Doug and Rob Ford could combine homophobia with their hatred of cyclists.

In a city full of gay people, and memorials like this one. 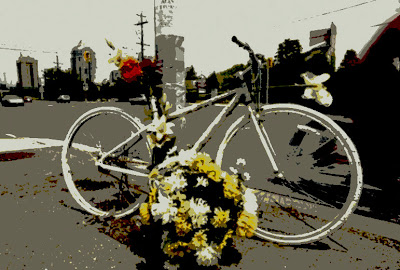 And only Cons like them could be so brutish, and so disgusting.

Oh boy. You know the other night I was consoling some broken hearted members of the Leaf Nation who had flooded into my neighbourhood. And although I'm a diehard Canadiens fan eh?

I came to the conclusion that they deserved better... 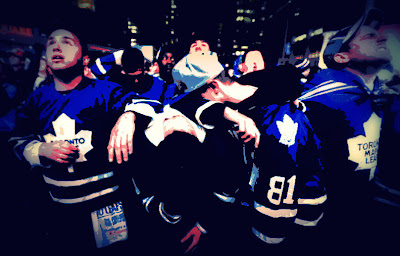 And I feel the same way about Toronto, a city that after living here for so many years, I have reluctantly come to love.

And the good news? That's exactly what's going to happen.

Olivia Chow would easily defeat Mayor Rob Ford in next year’s municipal election in all but one scenario where the centre-left vote is split three ways, a new poll by Forum Research shows. In a one-on-one race, Chow would win with 57 per cent of the vote compared to 36 per cent for Ford, the poll found.

And if Olivia, who is my MP, does run, I am going to join her campaign on day ONE. And work my little butt off to help drive those Con hogs from power.

I'm sure they'll have me doing things like pushing a broom, like the gay community always does during the Pride Week events. !@#!!

But in this case even a humble broom will be a mighty symbol eh?

And it's the least I can do for the city where I have had so many happy times, and made some great new friends.

For the Fords really are DISGUSTING. Like the Harper Cons they really have to go.

And love it or hate it, Toronto is an amazing Canadian city.

And it really does deserve better... 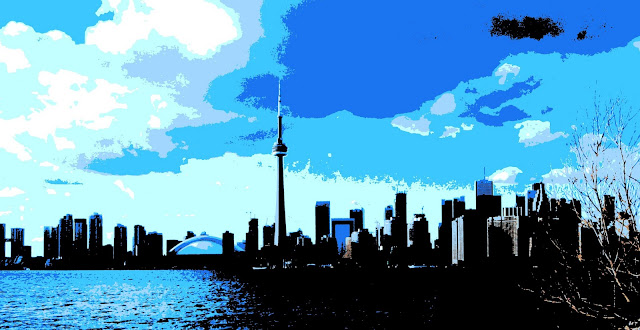 The Harpercons must be in disarray, what to do, whom to defend, on the one hand you have Senator Duffy lobbying behind the scenes on behalf of Sun News with respect to their CRTC application, defrauding the public with fraudulent expense account submissions, or expenses incurred beyond his Senate duties, on the other hand Harpercon champion Rob Ford, representing all that is pure, Anglo-Saxon white and righteous in the heart of crime-ridden decadent Moronto seen on video indulging in immoral and criminal behavior with the very enemy - gang-bangers, bank robbers, convenience store thieves and Somali drugs lords - his noisy, crazed and enraged supporters claim is the very embodiment of evil in Canada, and Toronto in particular, that Ford has sworn to eradicate and drive out.

So it will to entertaining to see how the Harpercon raving bigots like Waarheid and Big Bad Jim and a legion of others, who infest media discussion threads with their description of Toronto as some crime-ridden immigrant-infested hellhole, with calls to ban immigration, deport all muslims, deport all non-European immigrants, arm the populace to defend against immigrant-inspired crime, reinstate the death penalty, pat each other on the back over homophobic slurs directed at Liberals .... such are their contributions to political discourse ... it will indeed be interesting to see how they twist and turn in an attempt to exonerate their political champion Ford, or explode in fury denouncing Ford for consorting with the enemy, embracing the criminal lifestyle, and redouble their fear-mongering and hate-mongering appeals to cleanse Canada from the evils they attribute to Liberal/ left wing policies on crime and immigration.

It would be wonderful if Olivia Chow could unseat the disgusting Ford, but don't bet on anything..look what happened here in BC..every poll was wrong, and aside from my good Vancouver Island fellow voters, the Province, despite all the abuse and scandals heaped on us, not only gave our so-called "Liberals" a new mandate, they gave the NDP, touted as shoo-ins, less seats than before...
Canadians enjoy abuse, evidently, and very, very few even bothered to vote here...
I cross my fingers for Olivia, but after the disaster in BC, I'm cynical about any decent politician getting in, anywhere...

Right-wing pieces of shit know no shame. (They don't know much of anything really.)

These are the war-loving "traditional values" types who cheer pedophile draft-dodger Ted Nugent. "For Nation" will stand by their man after this.

They just don't give a shit.

People vote for Ford because they identify with him. Its just that easy. Couple that with voter apathy, people get what they vote for. It is unfortunate others suffer but the rest of the population most likely thinks Ford is just fine. The different civic parties obviously don't think Ford is all that bad because they are all sticking to their own agenda.

Here in B.C. the lieberals won the provincial election. Some of us were stunned. After the lieberal track record of corruption, poverty, give aways to insider friends, they were relected. How did this happen? Well one, the NDP did not get their vote out. Only 48% of the electorate voted. Second, the Green party took enough votes away in 14 ridings to cause the NDP to loose those seats. So now the greens have one mla and the lieberals are the government and there goes the enviornment. The greens reallllllly, reallllly care about the enviornment but they care more about their own personal ambitions. Now we will see mines start up which will destroy the enviornment, with imported Chinese workers; pipelines through our wilderness--the deals signed; the sale of B.C. Hydro and the Liquor Branch, which owns all sorts of very valuable realestate; and worst of all the child poverty will continue.

hi Rene...yes I think disarray is the right word. The PMO must resemble an anthill somebody just stepped on. And to make matters worse, Wright is supposed to be the great problem solver, and now he's part of the problem. I can't imagine that he will last long, and his departure will be a huge loss, especially since so many other Cons are revolting. The Harperites will no doubt try to keep spinning themselves out of this mess, but I think it will be difficult, especially since their image was already so tainted. And as you point out, that picture of Ford and the gangbangers isn't going to help their reactionary anti-crime crusade. For who can really tell now who are the Cons and who are the criminals? ;)

hi lefty... I don't blame you for feeling a bit pessimistic after what happened in BC. It was a horrible result. But the polls have consistently shown Olivia ahead in the polls. This latest scandal has the potential to damage Ford even more than all the others, because if our side or the police get hold of that tape it's all over. And don't forget eh? I'm on Olivia's side... ;)

hi Steve...yes I saw that video. It's amazing how quickly they can put one together. And I agree with Kinsella that last shot is so true. Or was. Because as I told the others, I really think this scandal has the potential to do some devastating damage. There have long been rumours about Ford's substance abuse problems, and now that they appear to have been confirmed, I wouldn't be surprised if other stories follow...

hi thwap...Maybe you're right, but when the Ford Nation stares at that picture of Ford with the gangbangers, I wouldn't be surprised if it really rattles their confidence in him. Especially since one of them was black. Those old racists might forgive him a lot of things, but that's their living breathing nightmare. And remember if that video does become public Ford really will be finished...

hi e.a.f...I don't know why people can identify with Ford. He's a millionaire who only comes off as ordinary because he's such a buffoon. I have a cynical theory that I should probably keep to myself. But sometimes I can't help feeling that because he is so obese, a lot of people vote for him just because of that. But hopefully I'm wrong, and hopefully after this episode people will wake up and realize you just can't have a buffoon running Canada's largest city because the day of reckoning will not be a pretty one...

Ford is being a typical bigot; only dealing with "minorities" when they are useful to him.

yes, he is a millionare but people look at him and they see a fat guy who drinks too much. If we look south of the border you have to wonder how so many people thought they had enough in common with Romney to vote for him. In some cases people vote for wealthy elites because they can then "associate" with them.

People see what they want to see. Check the research with cognative phsycologists. One book by an evolutionary pyschologist describes the progressives vs. the teapartiers as a differance in mating strategies.

So if Rob Ford can make it, maybe they can also. Rob Ford may be a millionaire but he certainly doesn't come off as what we usually think of when we think millionaire.

Chow would be less than clever to leave her seat as an M.P. to run for mayor of Toronto. What the polls say is one thing, what happens is another. If she looses the race, we have lost a good progressive M.P. Find some one else to run against Ford the next time and see if the others can agree to use one or two candidates only. As we saw here in B.C. it was the progressive vote which was split and it got the lieberals re elected.